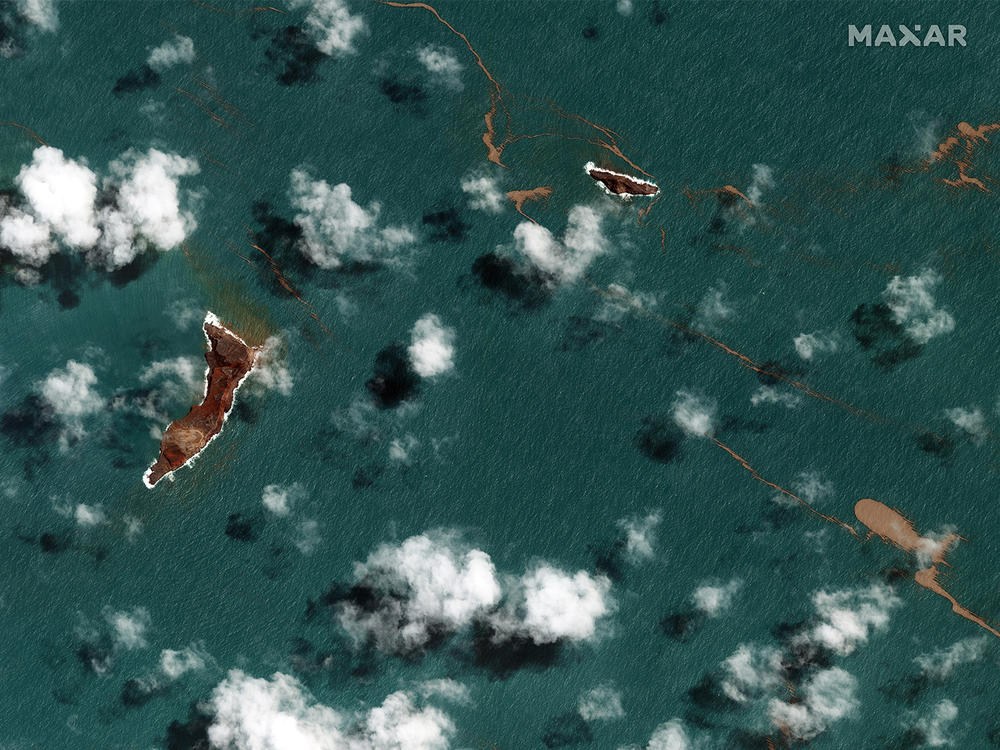 The island of Hunga Tonga Hunga Ha'apai, as imaged by satellites on January 6, 2022 (left) and January 18 (right). It was obliterated in the eruption, which scientists estimate was 10 megatons in size.

NASA researchers have an estimate on the power of a massive eruption that took place on Saturday near the island nation of Tonga.

"We come up with a number that's around 10 megatons of TNT equivalent," says James Garvin, the chief scientist at NASA's Goddard Space Flight Center, told NPR.

That means the explosive force was more than 500 times as powerful as the nuclear bomb dropped on Hiroshima at the end of the second world war.

The blast was heard as far away as Alaska, and was probably one of the loudest events occur on earth in over a century, according to Michael Poland, a geophysicist with the US Geological Survey.

"This might be the loudest eruption since [the eruption of the Indonesian volcano] Krakatau in 1883," Poland says. That massive 19th century eruption killed thousands and released so much ash that it cast much of the region into darkness.

In the case of this latest event, Garvin says that he believes the worst may be over — at least for now.

"If the past precedent for volcanic eruptions in this kind of setting has any meaning at all," he added, "then we won't have another one of these explosions for a while."

Even three days after the event, Tonga remains largely cut off from the world. Undersea communications cables appear to have been cut, and the airport is covered in ash, preventing relief flights from arriving at the capital city of Nukuʻalofa.

Reconnaissance flights by the government of New Zealand showed ash had blanketed houses and many other structures. The New Zealand foreign ministry reported that two had been confirmed killed and that a tsunami had inundated the western coast of the main island of Tongatapu, causing major damage. Wire reports cite the Government of Tonga claiming one additional death and even more damage on outlying islands, including the Mango island, where all homes have been destroyed. 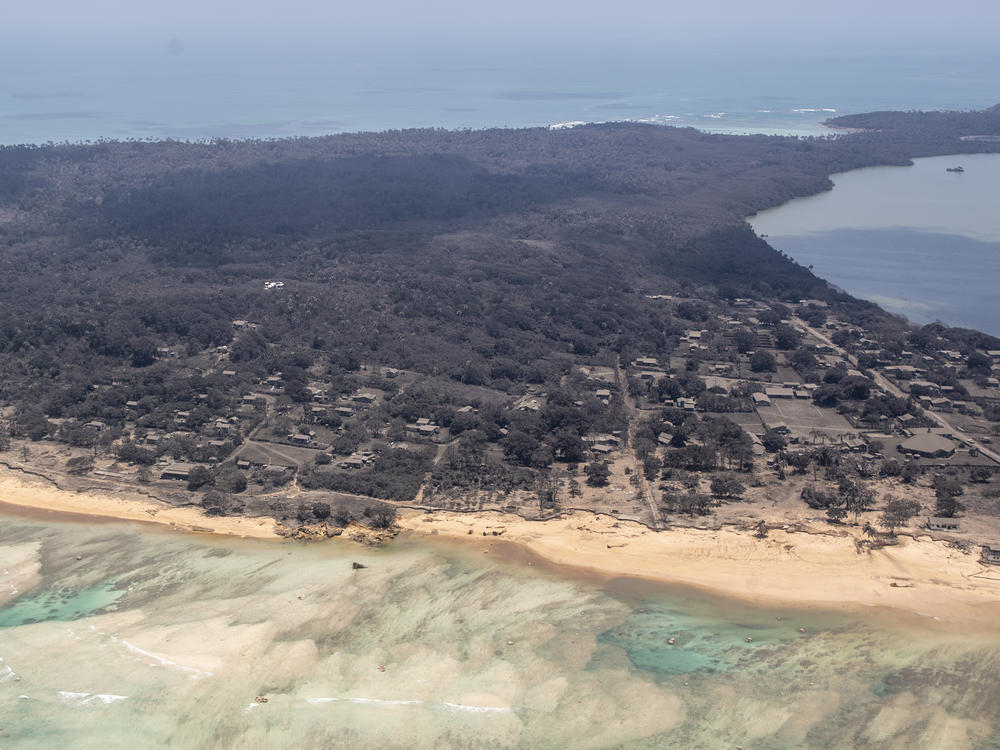 An aerial view of heavy ash fall on January 17, 2022 on the island of Nomuka, Tonga. The extent of the damage to the island nation remains largely unknown.

The volcano behind the eruption had been the subject of study by the NASA team in the years running up to this explosive event. The islands that form Tonga lie along a subduction zone where one part of the earth's crust dips under another, according to Garvin.

"In this particular case, we don't know when, a kind of volcano with a big summit ring of hills and things formed," Garvin says.

In late 2014 and early 2015, along the rim of that caldera, volcanic activity built a platform that rose up out of the sea, creating new island. Layers of steam and ash eventually connected the island, known as Hunga Tonga Hunga Ha'apai, to two much older islands on either side of it.

Hunga Tonga Hunga Ha'apai was completely destroyed by Saturday's explosion, says Dan Slayback, a research scientist for NASA Goddard and Science Systems and Applications Inc. Slayback says the blast was so massive it even appears to have taken chunks out of the older islands nearby.

"They weren't ash — they were solid rock, blown to bits," he says. "It was quite amazing to see that happen."

Garvin says the Island's formation also probably seeded its destruction. As it rose from the sea, layers of liquid magma filled a network of chambers beneath it. He suspects the explosion was triggered by a sudden change in the subterranean plumbing, which caused seawater to flood in.

"When you put a ton of seawater into a cubic kilometer of liquid rock, things are going to get bad fast," he says.

But for all its explosive force, the eruption itself was actually relatively small, according to USGS scientist Michael Poland. Unlike the 1991 eruption of Mt. Pinatubo, which spewed ash and smoke for hours, the events at Hunga Tonga Hunga Ha'apai lasted for less than 60 minutes. He does not expect that the eruption will cause any short-term changes to Earth's climate, the way other eruptions have in the past.

In fact, Poland says, the real mystery is how such a relatively small eruption could create such a big bang and tsunami.

"It had an outsized impact, well beyond the area that you would have expected if this had been completely above water," he says. "That's the thing that's just a head scratcher."

Garvin says that scientists want to follow-up with additional surveys of the area around the volcano caldera. Satellite imagery analysis is already underway, and may soon be followed with missions by uncrewed drones. He hopes the volcano will be safe enough for researchers to visit later in the year.

Poland says he believes researchers will learn a lot more in the days and months to come, as they conduct new surveys of the area.

"This is just a horrible event for the Tongans," he says. But "it could be a benchmark, watershed kind of event in volcanology." 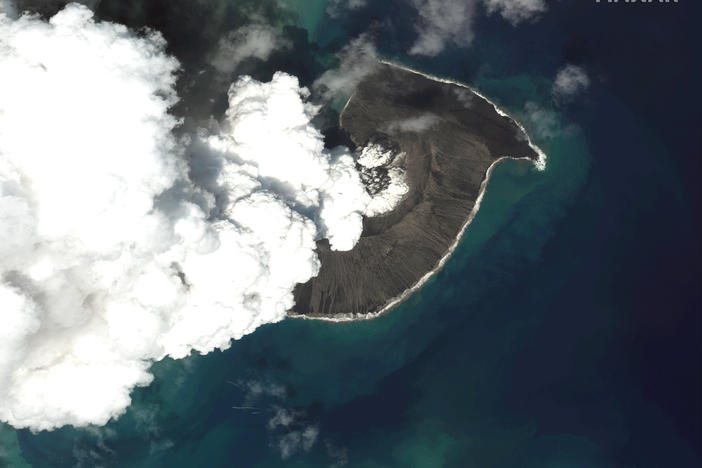 A station to detect nuclear weapons tests picked up the volcanic eruption in Tonga from Antarctica. Some experts say the blast could be more than 50 megatons, while NASA estimates 6-10 megatons. 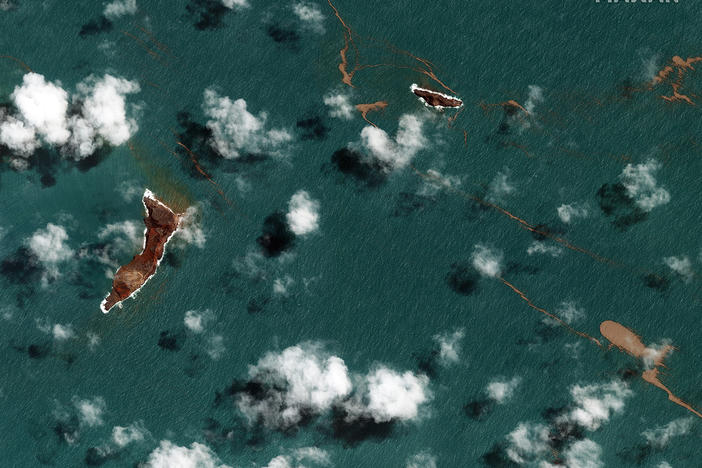 Researchers who have been studying the volcano since 2015 say it was likely caused by seawater flowing into a chamber filled with magma. 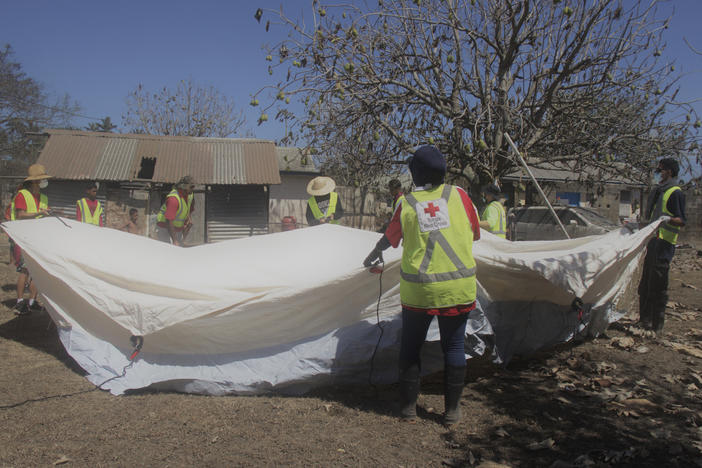 Since the pandemic began, Tonga has reported just a single case of COVID-19 and has avoided any outbreaks.