Saudi Arabia is putting on the Formula One Grand Prix this weekend. And China is hosting the Winter Olympics. Both countries face major accusations of rights abuses — and sportswashing.

Ever wonder why some of the world's biggest sporting events are hosted by countries accused of human rights violations? Take, for example, next year's Winter Olympics in China or the 2022 Soccer World Cup in Qatar. And Saudi Arabia has poured hundreds of millions of dollars into sports in recent years, including last month's $400 million takeover of English Premier League Club Newcastle United.

NPR's H.J. Mai tells us all about the concept of sportswashing.

Felix Jakens of Amnesty International U.K. describes it this way.

FELIX JAKENS: The process whereby a country or regime with a particularly poor human rights record use sport as a way of creating positive headlines, positive spin about their countries.

MAI: The human rights organization has been very vocal, repeatedly calling out perceived defenders of this practice - most recently, Saudi Arabia.

MAI: Like the 2018 murder of journalist Jamal Khashoggi, the imprisonment of rights activists or the ongoing bombing campaign in Yemen.

JAKENS: And in order to create some positive news, they're using and increasingly seeing sport as an opportunity to launder their image.

UNIDENTIFIED SPORTSCASTER #1: Ladies and gentlemen, we are at the Mohammed Abdo Arena in Riyadh.

UNIDENTIFIED SPORTSCASTER #2: The final round of the Aramco Saudi Ladies International, presented...

MAI: Next month, global racing series Formula 1 is set to host its first ever race in the kingdom as part of a 10-year deal worth a reported $650 million.

Fahad Nazer, the official spokesperson for the Saudi Embassy in Washington, says those investments are part of Crown Prince Mohammed bin Salman's plans to diversify the country's economy, which is heavily dependent on oil and gas. Nazer says it's about creating a sports industry, rejecting the idea of sportswashing.

FAHAD NAZER: The notion that the transformative reforms currently underway in the kingdom are simply an attempt to improve the kingdom's image, I believe is wildly off the mark.

MAI: While there have been some new freedoms for Saudi citizens, the kingdom is more autocratic now than it was before, says Daniel Byman, a senior fellow at the Brookings Institution.

DANIEL BYMAN: There is more freedoms for women, just to make a very important example. But there is less tolerance even of limited political dissention.

MAI: Saudi Arabia, of course, is not the only country that has been accused of sportswashing. Republican Senator Rick Scott of Florida introduced a resolution last year calling on the International Olympic Committee to strip China of hosting February's Winter Olympics.

RICK SCOTT: I don't believe a country that is committing genocide against its own citizens, that's building a military, you know, to dominate the world, that steals jobs and technology from all over the world, denies basic rights to its own citizens should be hosting an Olympics.

A spokesperson for racing series Formula 1, which is owned by U.S.-based Liberty Media, tells NPR that it is taking rights violations very seriously. But Democratic Senator Ron Wyden of Oregon is not convinced. He says sports leagues are selling out their integrity for profits, helping to rehabilitate the reputation of human rights abuses.

And sportswashing can be effective, at least temporarily, says Professor Simon Chadwick of the Emlyon Business School in France. Take, for example, the 2018 Soccer World Cup.

SIMON CHADWICK: There was widespread criticism of Russia and quite a lot of fear as well about people going to Russia and what might happen to them when they were there. But what we saw upon people's return from the Russian World Cup is that, you know, their view of Russia was much changed.

MAI: With Western democracies increasingly scrutinizing the value of hosting large-scale sporting events, he believes countries with questionable human rights records will continue to use sports to boost their public image.

CHADWICK: What we will see is, you know, the likes of Saudi Arabia, China and others continuing to bid for these events, being awarded the rights to stage them and then leaving us in the West to deal with the kind of moral and ideological fallout that we have as a result of their hosting. 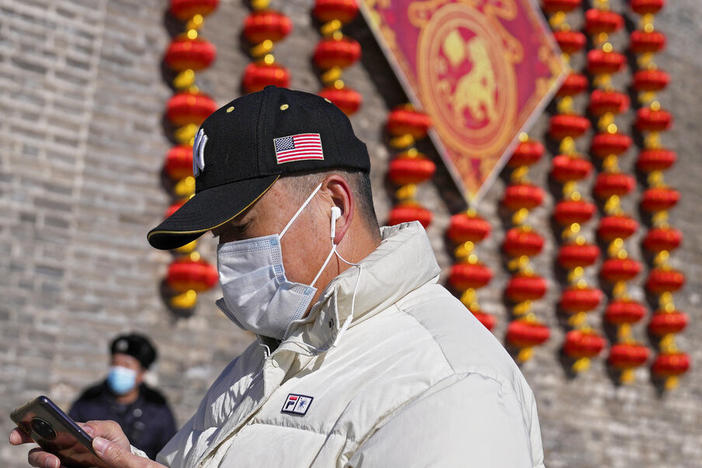 China is demanding the U.S. end its 'interference' in Beijing Olympics

The Foreign Ministry said Minister Wang Yi made the demand in a phone call with U.S. Secretary of State Antony Blinken on Thursday Beijing time.