The Netherlands and Australia find the omicron variant as curbs spread 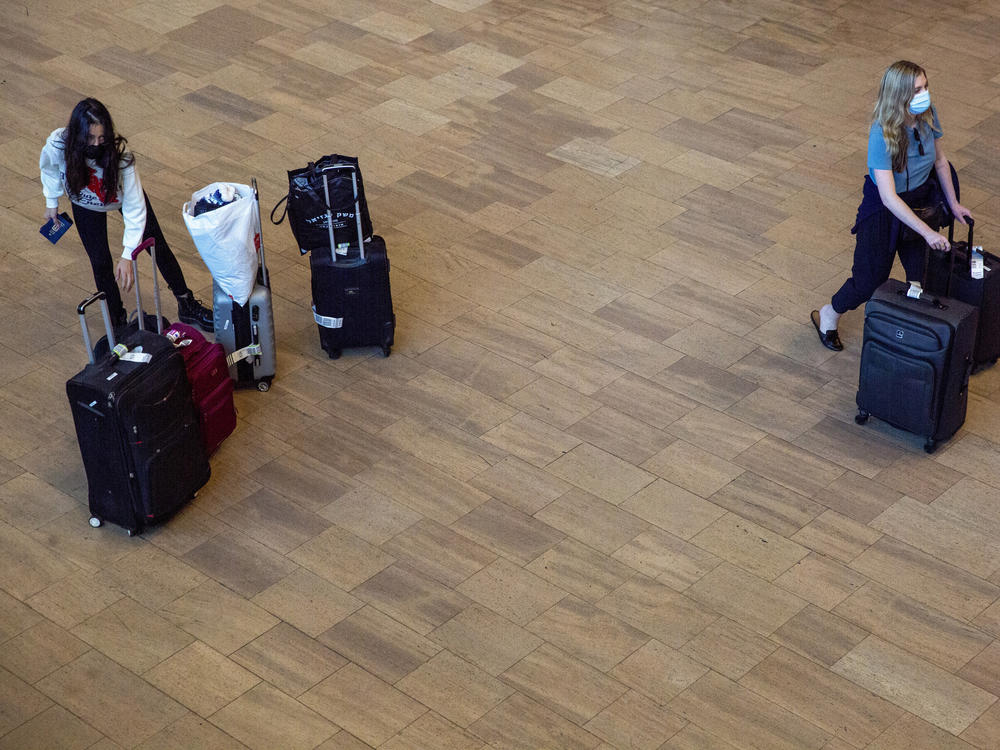 Travelers wearing protective face masks arrive to Ben Gurion Airport near Tel Aviv, Israel on Sunday. Israel on Sunday approved barring entry to foreign nationals as part of its efforts to clamp down on a new coronavirus variant.

THE HAGUE, Netherlands — The Netherlands confirmed 13 cases of the new omicron variant of the coronavirus on Sunday and Australia found two as the countries half a world apart became the latest to detect it in travelers arriving from southern Africa.

A raft of curbs being imposed by nations around the world as they scramble to slow the variant's spread also grew, with Israel deciding Sunday to bar entry to foreign nationals in the toughest move so far.

Confirmed or suspected cases of the new variant have already emerged in several European countries, in Israel and in Hong Kong, just days after it was identified by researchers in South Africa. The "act first, ask questions later" approach reflected growing alarm about the emergence of a potentially more contagious variant nearly two years into a pandemic that has killed more than 5 million people, upended lives and disrupted economies across the globe.

While much remains to be learned about the new variant, researchers are concerned that it may be more resistant to the protection provided by vaccines and could mean that the pandemic lasts for longer than anticipated.

The Dutch public health authority confirmed that 13 people who arrived from South Africa Friday have so far tested positive for omicron. They were among 61 people who tested positive for the virus after arriving on the last two flights to Amsterdam's Schiphol airport before a flight ban was implemented. They were immediately put into isolation, most at a nearby hotel, while sequencing was carried out.

Authorities in Australia said two overseas travelers who arrived in Sydney from Africa became the first in the country to test positive for the omicron variant. Arrivals from nine African countries are now required to quarantine in a hotel upon arrival. Two German states reported a total of three cases in returning travelers over the weekend.

Israel moved to ban entry by foreigners and mandate quarantine for all Israelis arriving from abroad.

"Restrictions on the country's borders is not an easy step, but it's a temporary and necessary step," Prime Minister Naftali Bennett said at the start of the weekly Cabinet meeting. 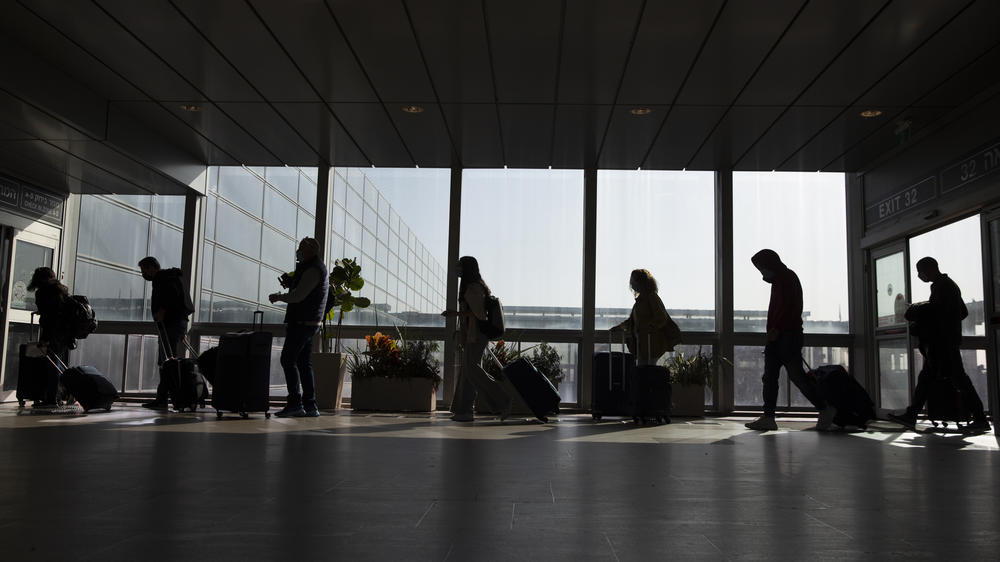 Travelers walk with their luggage in the Ben Gurion Airport near Tel Aviv, Israel on Sunday.

Dr. Ran Balicer, head of the government's advisory panel on COVID-19, told Israel's Kan public radio that the new measures were necessary for the "fog of war" surrounding the new variant, saying it was "better to act early and strictly" to prevent its spread.

Dutch Health Minister Hugo de Jonge said he has asked his country's public health institute for advice on whether additional travel restrictions are needed, but he said he wants to coordinate with his European Union counterparts because "I think those are really steps that we will have to take together."

Many countries have restricted or banned travel from various southern African countries — among the latest New Zealand, Thailand, Indonesia, Singapore, Sri Lanka, the Maldives and Saudi Arabia. Places that already had imposed restrictions include Brazil, Canada, the EU, Iran, and the U.S. This goes against the advice of the World Health Organization, which has warned against any overreaction before the variant is thoroughly studied.

South Africa's government responded angrily to the travel bans, which it said are "akin to punishing South Africa for its advanced genomic sequencing and the ability to detect new variants quicker." It said it will try to persuade countries that imposed them to reconsider.

"Whilst we respect the right of all countries to take the necessary precautionary measures to protect their citizens, we need to remember that this pandemic requires collaboration and sharing of expertise," the minister for international relations and cooperation, Naledi Pandor, said in a statement.

The United States' top infectious diseases expert, Dr. Anthony Fauci, said he would not be surprised if the omicron variant was already in the U.S., though it hasn't yet been detected there.

In Europe, much of which already has been struggling with a sharp increase in cases over recent weeks, officials also were on guard.

Italy was going through lists of airline passengers who arrived in the past two weeks after a business traveler who returned from Mozambique and landed in Rome on Nov. 11 tested positive for omicron. The Lazio region's top health official, Alessio D'Amato, said that "controls at airports, ports and train stations have been reinforced."

French Health Minister Olivier Veran said that, while his country had no confirmed cases yet, "it is probable that there currently are cases in circulation."

While it is not clear yet how existing vaccines work against the omicron variant, Veran said France isn't changing its strategy to fight the latest surge of infections driven by the delta variant, which centers on increasing vaccinations and boosters.

David Hui, a respiratory medicine expert and government adviser on the pandemic in Hong Kong, said that even though it is not clear if current coronavirus vaccines are effective against the new variant, the city's vaccination rate should be increased and booster doses should be implemented as soon as possible.

He said that the two people who tested positive for the omicron variant had received the BioNTech-Pfizer shot and exhibited very mild symptoms, such as a sore throat.

"Vaccines should work but there would be some reduction in effectiveness," he said. 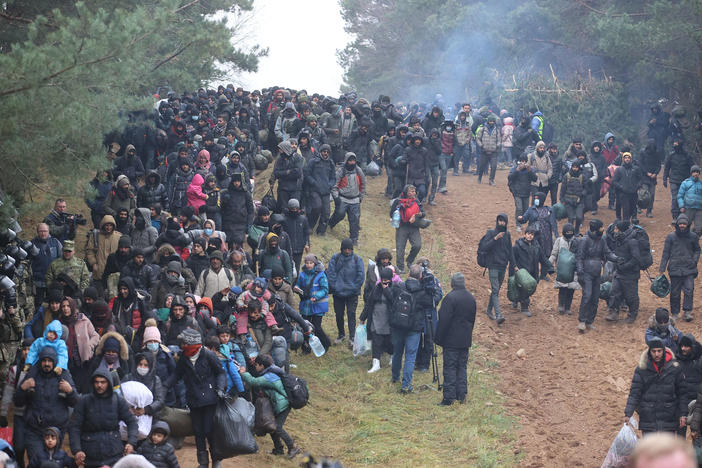 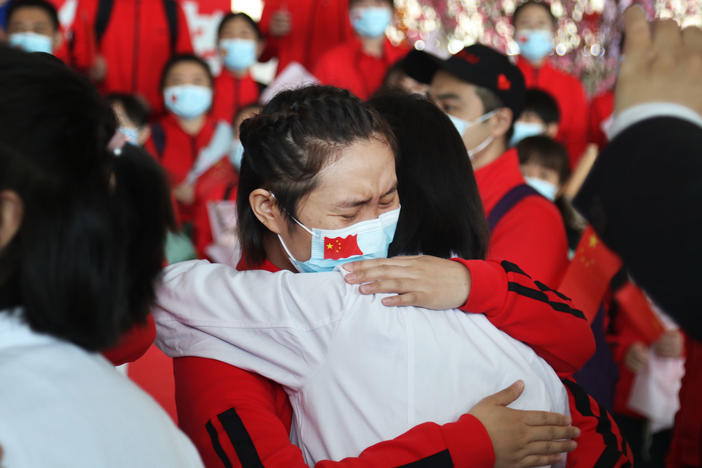 International Stories You Loved In 2020

The coronavirus, the rescue of an abused elephant, harassment of Black diplomats and the hunt for Nazi-looted instruments are some of the subjects of the year's most popular NPR international stories.