Composer and lyricist Stephen Sondheim, one of the most influential figures in the American musical theater, has died. He was 91.

A Broadway master has moved on. Composer and lyricist Stephen Sondheim, the most respected figure in American musical theater, died earlier today. He was 91. His shows range from the vaudeville-inspired romp "A Funny Thing Happened On The Way To The Forum"...

UNIDENTIFIED GROUP #1: (As characters, singing) Something for everybody - comedy tonight.

CORNISH: ...To the concept musical "Sunday In The Park With George" about the art of making art.

(SOUNDBITE OF SONG, "PUTTING IT TOGETHER")

MANDY PATINKIN: (As George, singing) Bit by bit, putting it together piece by piece - only way to make a work of art.

CORNISH: It would be hard to overstate Stephen Sondheim's influence on Broadway form or on critic Bob Mondello, who offers this remembrance.

BOB MONDELLO, BYLINE: At the climax of most musicals, characters sing their hearts out about enchanted evenings or defying gravity or what I did for love. Sondheim characters sing about ambivalence, about feeling conflicted.

(SOUNDBITE OF SONG, "BEING ALIVE")

LARRY KERT: (As Bobby, singing) Somebody, hold me too close. Somebody, hurt me too deep.

MONDELLO: This is Bobby in "Company," the musical that established the Sondheim template back in 1970 - not his first show but the first big hit in which his characters sing less to move the action forward than to offer a sort of psychological profile. Bobby is afraid to commit. He looks at his friends' marriages and cringes. Still, he wants what they have.

(SOUNDBITE OF SONG, "BEING ALIVE")

KERT: (As Bobby, singing) Somebody, need me too much. Somebody, know me too well. Somebody, pull me up short and put me through hell and give me support.

MONDELLO: This is not the way most musicals wrap things up, but Sondheim shows almost always send audiences out not just singing but thinking about everything from the Westernization of Japan in "Pacific Overtures"...

PATRICK KINSER-LAU: (As Dutch Admiral, singing) Two ports, one of them not too rocky. How about Nagasaki?

LEN CARIOU: (As Sweeney Todd, singing) There's a hole in the world like a great black pit, and the vermin of the world inhabit it. And its morals aren't worth what a pig could spit. And it goes by the name of London.

MONDELLO: ...To what happens after happily ever after in "Into The Woods."

UNIDENTIFIED ACTOR #1: (As the Baker, singing) Into the woods. It's always when you think at last you're through. And then into the woods you go again to take another journey.

MONDELLO: The first act of this fairy tale show gives us fables like Red Riding Hood and Jack and the Beanstalk more or less straight, basically what you expect of musical comedy. The second act has princes who are terrible husbands, witches who may be nasty but know things.

MONDELLO: That's Sondheim puzzling out on stage how the world works. Puzzling is the right word. A lover of brain teasers and games, Sondheim delighted in turning the Broadway musical into a playground for thinkers. When you hear moon-June-croon lyrics in one of his shows, they're probably a joke. Tricky interior rhymes are more his thing - say, we have so much in common, it's a phenomenon, a line written for another composer's music early in his career, as were his lyrics for Leonard Bernstein's semi-symphonic "West Side Story."

UNIDENTIFIED GROUP #2: (As characters, singing) I like to be in America - OK by me in America.

MONDELLO: It was a show that both established Sondheim as a lyricist and gave him a pet peeve about the way sophisticated music tends to be received on Broadway. He joked about it in the only song he ever called autobiographical. Here from an HBO special, Sondheim doubles the joke by stepping into the role of a producer in "Merrily We Roll Along" and growling the thing people kept telling him back when he was starting out.

MONDELLO: When he finally hums what the character thinks is a hummable melody, it's Rodgers and Hammerstein's "Some Enchanted Evening." That's an in-joke because in real life, lyricist Oscar Hammerstein Jr. was Sondheim's mentor. In the 1940s, when the budding songwriter was just a kid, Rodgers and Hammerstein were transforming Broadway's lighthearted song-and-dance shows into musical plays. Sondheim later took that evolution a step further. His musicals were structured around concept. The show "Follies," for instance...

UNIDENTIFIED ACTOR #2: (As character) Roscoe's here, as always, to bring out the (unintelligible). Let's go.

MONDELLO: ...Centered on a Ziegfeld-style metaphor for marital folly.

(SOUNDBITE OF SONG, "COULD I LEAVE YOU?")

UNIDENTIFIED ACTOR #3: (As Phyllis, singing) You'll believe the lies ill-concealed and the wounds never healed. And the game's not worth winning. And wait. I'm just beginning.

MONDELLO: In "A Little Night Music," the concept was to take a three-tiered romance...

MONDELLO: ...And have the characters sing about it all in waltz time.

UNIDENTIFIED ACTOR #4: (As Desiree, singing) Are we a pair?

MONDELLO: And in what is arguably Sondheim's masterwork, "Sweeney Todd," he mixed operatic form and musical comedy jokes to tell the story of a demon barber who slashes his customers' throats and a baker...

UNIDENTIFIED ACTOR #5: (As Mrs. Lovett) Here we are, hot from the oven.

MONDELLO: ...Who bakes them into meat pies.

UNIDENTIFIED ACTOR #6: (As Sweeney Todd) What is that?

UNIDENTIFIED ACTOR #5: (As Mrs. Lovett, singing) It's priest. Have a little priest.

UNIDENTIFIED ACTOR #6: (As Sweeney Todd) Is it really good?

UNIDENTIFIED ACTOR #5: (As Mrs. Lovett, singing) Sir, it's too good at least. Then again, they don't commit sins of the flesh, so it's pretty fresh.

UNIDENTIFIED ACTOR #5: (As Mrs. Lovett) Only where it sat.

UNIDENTIFIED ACTOR #6: (As Sweeney Todd) Haven't you got poet or something like that?

UNIDENTIFIED ACTOR #5: (As Mrs. Lovett, singing) No. You see; the trouble with poet is how do you know it's deceased? Try the priest.

MONDELLO: Though the things Sondheim was doing were hugely influential with other Broadway composers - Lin-Manuel Miranda's "Hamilton," for instance, couldn't have been conceived without the building blocks Sondheim helped develop - audiences didn't always get his shows. He never had a mega-hit musical, and "Send In The Clowns" was his only hit song. But he was revered in the theatrical establishment for teaching and mentoring, sharing his smarts and making the form he loved smarter. He was loved by some of us outsiders, too. To a large extent, Stephen Sondheim wrote the soundtrack to my life.

(SOUNDBITE OF SONG, "NOT A DAY GOES BY")

JIM WALTON: (As Frank, singing) Not a day goes by, not a single day...

MONDELLO: Not a day goes by that I haven't felt I was living his lyrics - for a while, by not getting married; when I was low, by drinking to that and one for Mahler; by trying to keep a good thing going; by trying to never do anything twice. Sondheim lived that last lyric. His shows were all different, each one thought-provoking in a new way, never more than when he looked deep into the artistic process itself.

PATINKIN: (As George, singing) I have nothing to say.

PETERS: (As Dot) You have many things.

PATINKIN: (As George, singing) Well, nothing that's not been said.

PETERS: (As Dot) Said by you, though.

MONDELLO: "Sunday In The Park With George" depicts a struggling artist, George Seurat, urged by his muse to do that hardest thing to do when you're stuck, whether in life or in art, the thing Sondheim always did and that, for more than five decades, kept his art fresh.

MONDELLO: Across 18 major musicals, decades of mentoring, Stephen Sondheim followed that dictate - to become, in the words of one of his lesser-known lyrics, the best thing that ever has happened to Broadway. He kept moving on.

PETERS: (As Dot, singing) You have to move on.

MONDELLO: And now the rest of us have to.

PETERS: (As Dot) Stop worrying if your vision is new.

PETERS: (As Dot, singing) Let others make that decision. They usually do. You keep moving on. Look at what you've done...

PATINKIN: (As George, singing) Something in the light.

PATINKIN: (As George, singing) Something in the sky.

PATINKIN: (As George, singing) In the grass.

PATINKIN: (As George, singing) Up behind the trees.

PETERS: (As Dot, singing) Look at all the things you gave to me.

PATINKIN: (As George, singing) Things I hadn't looked at till now.

PETERS: (As Dot, singing) Let me give you something in return.

PATINKIN: (As George, singing) Flower in your hat and your smile.

PETERS: (As Dot, singing) I would be so pleased.

PATINKIN: (As George, singing) And the color of your hair. Transcript provided by NPR, Copyright NPR. 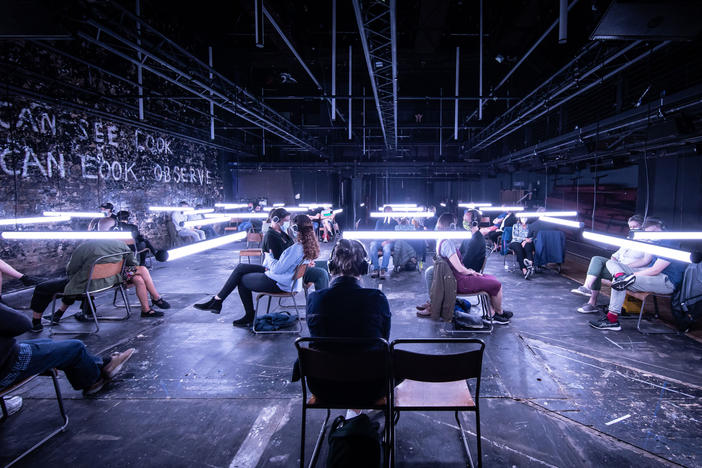 It's been more than a year since theater goers have been able to see an indoor performance in New York City. But some spaces and producers are moving to find safe ways to open up. 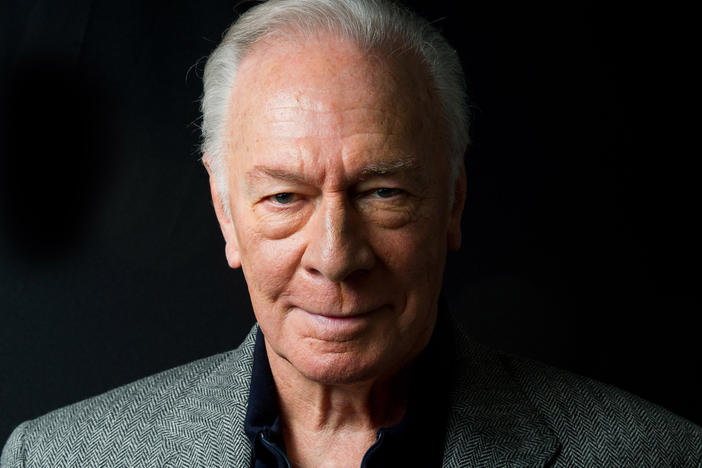 The Oscar-, Emmy- and Tony Award-winning actor began acting in films in the 1950s. He said he felt like he was "starting over" in acting every decade — "you never stop learning how to act," he said. 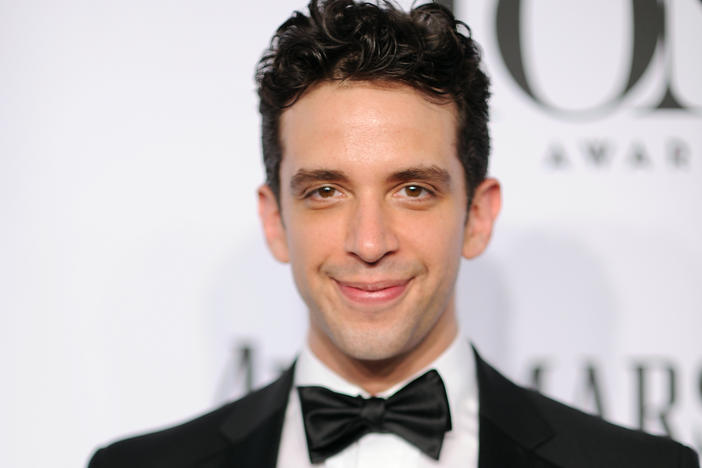 The Broadway actor was nominated for a Tony Award for his performance in Bullets Over Broadway. Cordero had been working on a production of Rock of Ages when he developed symptoms of pneumonia.