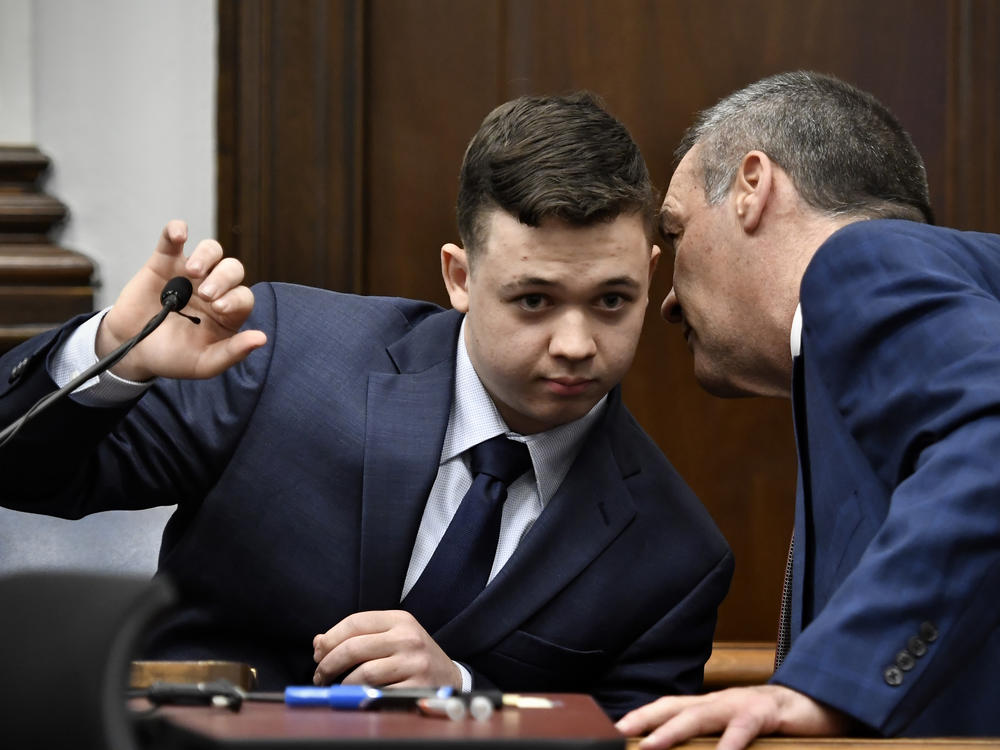 Kyle Rittenhouse (left) listens to his attorney Mark Richards as he takes the stand during his trial on Wednesday in Kenosha, Wis.

Prosecutors and defense lawyers have rested their cases in the closely watched homicide trial of Kyle Rittenhouse, the 18-year-old who shot and killed two protesters one night last year in Wisconsin.

Over eight days of testimony — including a dramatic turn by Rittenhouse himself, where he sobbed on the stand — witnesses and visual evidence described a tense and chaotic night filled with fires, verbal threats and physical intimidation and where guns abounded, in the hands of protesters and self-styled militiamen alike.

"I didn't want to have to kill anybody. I was being attacked," Rittenhouse testified Wednesday, his voice shaking.

Closing arguments are set to take place Monday. The jury will likely begin deliberations that afternoon.

In late August 2020, the city of Kenosha, Wis., was enveloped by chaotic protests after police there shot and wounded a 29-year-old Black man named Jacob Blake. Protesters destroyed police cars and burned down several buildings.

On Aug. 25, ahead of a third night of demonstrations, Rittenhouse has said he traveled from his home in Antioch, Ill., to Kenosha to "protect" private property and act as a medic. He was 17 at the time.

Rittenhouse went out on the streets that night armed with an AR-15-style rifle and had a series of confrontations with protesters. He shot and killed Joseph Rosenbaum, and then, minutes later, he shot and killed Anthony Huber and injured Gaige Grosskreutz.

Rittenhouse has maintained that he was acting in self-defense. Prosecutors have argued that the defendant created the peril through his own reckless actions that caused others to fear for their own lives and led directly to the violence.

On Friday, prosecutors asked Judge Bruce Schroeder for the jury also to be able to consider lesser versions of several counts — including those related to the shootings of Huber and Grosskreutz.

A verdict is expected next week. Several legal experts contacted by NPR differed on the expected outcome, but most thought Rittenhouse is likely to be acquitted on the most serious charges.

"It feels like the case is very, very close. And in very close cases, the defendant should win," said Steven Wright, a law professor at the University of Wisconsin-Madison.

"I'd be shocked if there's convictions on all the counts here," said Julius Kim, a Milwaukee-based criminal defense attorney who once worked as a prosecutor. "I wouldn't be surprised if he got acquitted of all, quite honestly."

Read on for the major moments and takeaways from the trial's second week:

Prosecutors' own witnesses sometimes seemed to bolster the defense

The prosecution, led by Assistant District Attorney Thomas Binger, needs to show that Rittenhouse was not acting in self-defense in order to win convictions on the most serious charges. But making that case has proved difficult.

"My sense was that the state has repeatedly squandered what looked to be, at least going in, a winning hand," said Chris Zachar, a criminal defense attorney based in La Crosse, Wis., who is not involved in the trial.

Mountains of video and photo evidence appear to show Rosenbaum acting aggressively and chasing Rittenhouse, Huber striking him with a skateboard and Grosskreutz pointing a pistol at him.

And the state's own witnesses at times offered testimony that seemed to work at odds with the prosecution's case. "Almost every single prosecution witness offered equally as strong information for the defense," said Wright. 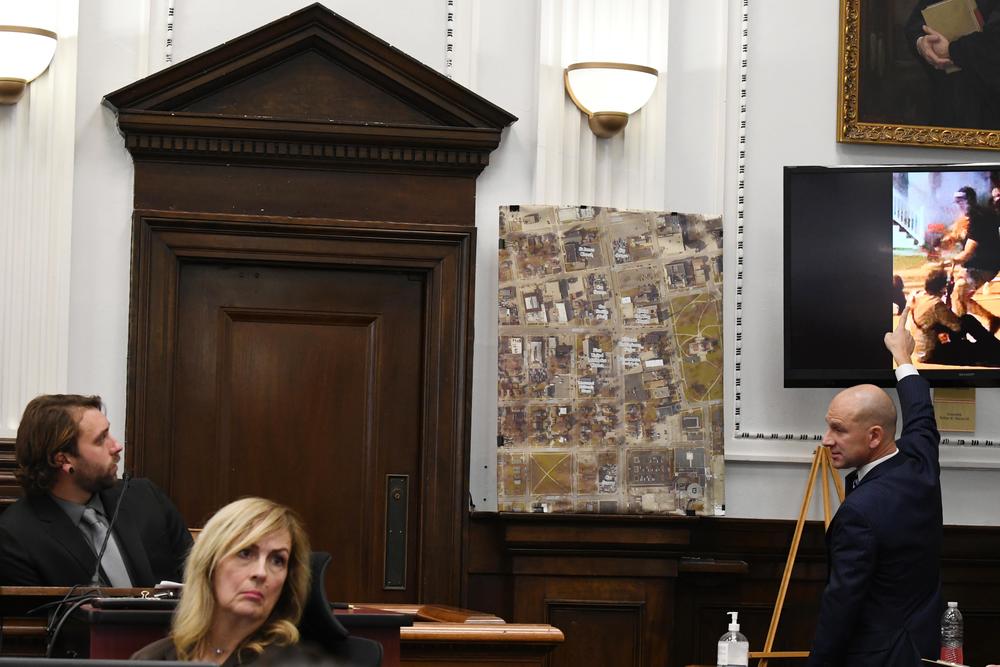 Defense attorney Corey Chirafisi questions Gaige Grosskreutz about how he was holding his pistol at the moment he was shot by Kyle Rittenhouse.

As the only person who survived being shot by Rittenhouse, he was positioned to be the state's star witness. Instead, defense lawyers pointed out numerous inconsistencies between Grosskreutz's remarks on the stand and initial statements given to police last year. And he admitted he was carrying his pistol that night despite an expired permit.

Perhaps the worst moment came during cross-examination, when Grosskreutz was asked whether he had his weapon pointed at Rittenhouse at the moment he was shot.

"It wasn't until you pointed your gun at him — advanced on him with your gun, now your hands down, pointed at him — that he fired, right?" defense attorney Corey Chirafisi said.

"Correct," Grosskreutz replied, as one of the prosecutors put his head in his hands.

Kim, the former prosecutor, said of the exchange: "There were times where I had to remind myself who called him as the witness."

Rittenhouse's day on the stand also may have helped both sides

Rittenhouse took the stand Wednesday and testified for hours, once breaking into sobs so intense that the judge called for a break.

It was the first time Rittenhouse had publicly told his full version of events that night. He described feeling afraid for his life as Rosenbaum chased him and reached for his rifle, as Huber struck him with the skateboard and as Grosskreutz advanced on him with the pistol.

Legal experts largely agreed that it benefited the defense's case for Rittenhouse to take the stand — a common move in self-defense trials.

"He's got this baby face that everyone talks about, yet he came across differently on the stand," Kim said. "He seemed much more assured and confident than I thought people expected."

Binger, the lead prosecutor, cross-examined Rittenhouse for hours, and some lines of questioning seemed more muddying than clarifying. Binger asked about Rittenhouse living in Antioch — an effort to distance him from Kenosha, where his father lived — and whether he played first-person shooter video games.

"We call it 'trial psychosis': that you get mixed up in the tiny little details that you forget to present the big picture," Zachar said.

But other experts pointed to a later exchange when the prosecutor drilled down on Rittenhouse's state of mind in the moments when he fired his rifle.

"You understand that when you point your AR-15 at someone, it may make them feel like you are going to kill them, correct?" Binger asked.

"Mr. Rosenbaum was chasing me. I pointed my gun at him, and that did not deter him. He could have ran away instead of trying to take my gun from me, but he kept chasing me. It didn't stop him," Rittenhouse replied.

Over roughly an hour of testimony, the prosecution questioned Rittenhouse about why he chose to do what he did: why he came to Kenosha at all, why he remained in a chaotic situation after curfew, why he ran into a used-car lot full of protesters alone to put out a fire, why he shot Rosenbaum four times instead of once.

"I thought that the prosecution scored some points," said Kim. "I found myself asking, 'Did he really need to shoot?' "

The prosecution has asked for the jury to consider lesser charges

The prosecutors' request that jurors also be allowed to consider lesser charges on several counts hints that the trial has not gone as well as the state might have hoped. The judge has not yet issued a decision on the lesser charges.

"I think the request for lesser included charges reflects an acknowledgment that their case might not be as strong with regard to the original charges and that at this point, they're willing to give up the prospect of life imprisonment for the defendant in exchange for obtaining convictions on something," Kim said.

Specifically, prosecutors want the jury to consider lesser versions of the first-degree intentional homicide charge. That charge, which is related to Huber's killing, is the most serious charge Rittenhouse faces and carries a mandatory life sentence.

In Wisconsin, those lesser charges include second-degree intentional homicide as well as first- and second-degree reckless homicide — the state's version of a manslaughter charge.

In addition, prosecutors asked the judge to allow the jury to also consider a second-degree version of the attempted intentional homicide charge — the count related to shooting Grosskreutz — along with first- and second-degree recklessly endangering safety charges.

The lesser charges could raise the possibility that the jury could decide that Rittenhouse earnestly believed he was defending himself but that his fear was not objectively reasonable, experts said.

"The burden for first-degree intentional homicide is always just so high. You've got to basically prove very close to that the defendant is a coldblooded killer," said Wright. "Reckless homicide basically involves: You engaged in particularly risky conduct, and someone died as a result of that risk — and it's a risk that society is unwilling to condone or recognize."

By offering the jury a range of options, prosecutors can raise their odds of winning a conviction, according to legal experts — especially in sensitive or controversial cases.

"Juries oftentimes look to compromise in those situations," said Zachar.

Prosecutors have argued that Rittenhouse showed "exquisitely poor decision-making" throughout the night. But for a self-defense case in Wisconsin, experts said, the moments of the shootings themselves are by far the most important factor.

"Everyone can see that it was not a good idea for a 17-year-old to strap on an AR-15 and go down there in the middle of a lot of civil unrest where there has already been violence, there had already been fires and people were very upset and the police were having a hard time controlling things and to go down there to protect property of someone that he doesn't even know," said Kim, the former prosecutor. "But ultimately, what this case comes down to is about three seconds of time in each shooting."

When they begin deliberations next week, jurors must consider whether Rittenhouse truly feared for his life and, if so, whether those fears were reasonable and whether the amount of force he used was reasonable.

Some legal observers noted that Rittenhouse's actions leading up to that night are relevant to the jury, particularly with charges that require jurors to find that Rittenhouse acted recklessly.

"I think they're relevant to his state of mind as to whether or not he was acting recklessly," said Zachar, the La Crosse-based criminal defense attorney. "There's no rational reason for why a 17-year-old should cross state lines, arm himself with a long gun, lie about being an EMT, then try to play vigilante throughout this incredibly dangerous and chaotic time. He had no business being there." 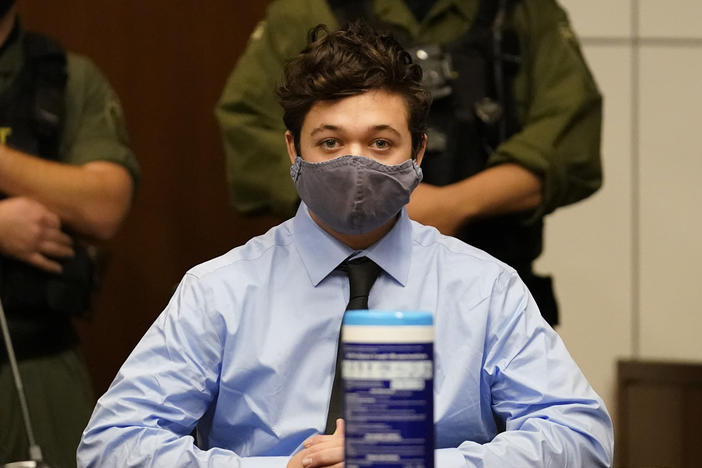 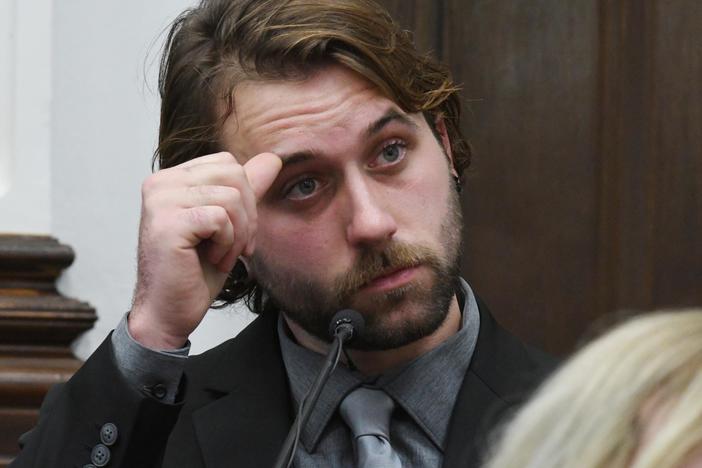 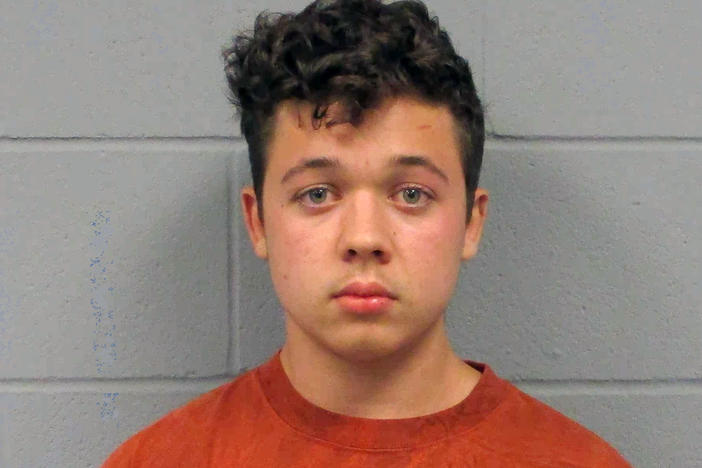 Prosecutors asked the judge last week to issue a new warrant and raise Rittenhouse's bail by $200,000, arguing that he violated conditions of his release by not alerting them to his change of address.