Britney Spears's conservatorship went back in front of a judge in Los Angeles on Friday afternoon, resulting in the termination of the pop star's arrangement with her father.

I'm Ailsa Chang in Los Angeles, where fans of Britney Spears were cheering outside the Stanley Mosk Courthouse earlier today as the hashtag #FreeBritney became a reality. A judge has terminated the conservatorship that has controlled nearly every aspect of the pop star's life for the past 13 years. It's a story that has drawn widespread attention, from Britney's fans to people on Capitol Hill. Britney Spears thanked her fans in a tweet earlier today and said that she thought she would cry the rest of the day, the, quote, "best day ever." NPR's Mandalit del Barco was in the courtroom earlier today and spoke with us from just outside, minutes after the ruling.

MANDALIT DEL BARCO, BYLINE: Well, today it seems that Britney Spears is free. Judge Brenda Penny said the conservatorship of her person and her estate are, quote, "no longer required," effective immediately. The judge also said she did not have to submit to any declaration of her capacity.

Now, for the past 13 years, she's been under two conservatorships; one for her finances and one for her health and well-being. In September, that same judge ruled that her father, Jamie Spears, would no longer be the conservator of her estate, her money. And that was a major victory for Britney Spears.

Now, the judge terminated conservatorship completely. And that's something that Britney and her lawyer wanted. Also, Jamie Spears wanted that. And her other conservator, Jodi Montgomery, wanted that, too. And Montgomery today said she hoped that Britney would live a safe, happy and fulfilling life.

Now, the judge agreed that a certified public accountant, John Zabel, would continue to - would no longer be in charge of her finances either, but he's still being held on a bit longer to transfer her assets into her trust.

CHANG: OK. So it sounds like it wasn't too much of a surprise how things went today and how quickly...

DEL BARCO: (Laughter) Yeah, that's right. But everybody agreed that the terms - that the conservatorship should be terminated. That's the thing; all the parties agreed to that. And all the parties here outside of the courthouse - I don't know if you can hear them in the background.

DEL BARCO: Everybody else is very, very happy out here.

CHANG: (Laughter) Well, tell me this, Mandalit. Was Britney Spears there in person?

DEL BARCO: She was not. I know she's been - she had called into the courthouse. Wow. I don't know if you can hear right now. Her lawyer is...

DEL BARCO: ...Being followed by reporters, and they just passed by me - because it's very exciting out here. She was not here in court, and she wasn't even - she didn't call in like she did in previous times. I don't know if we'll hear from her. I mean, she has been posting a bit on her social media, so presumably, we'll hear what she has to say somehow, (laughter) you know?

CHANG: Well, I'm hearing too much commotion out there. I'm too tempted...

CHANG: ...To ask you this, so - no, no, no. Just describe the scene for me. What does the crowd look like right now? I want to visualize it while I'm hearing it.

DEL BARCO: ...People wearing plaid skirts just like Britney had - has worn in the past on her - you know, as a performer. There's a lot of people here. And a lot of people are also thinking about the whole issue of conservatorship...

DEL BARCO: ...In general. So that's another big issue that's coming up here. Lots of cheering - there's lots of music.

That was NPR's Mandalit del Barco in Los Angeles speaking with us earlier today from just outside the courthouse where the conservatorship for Britney Spears was terminated. Transcript provided by NPR, Copyright NPR. 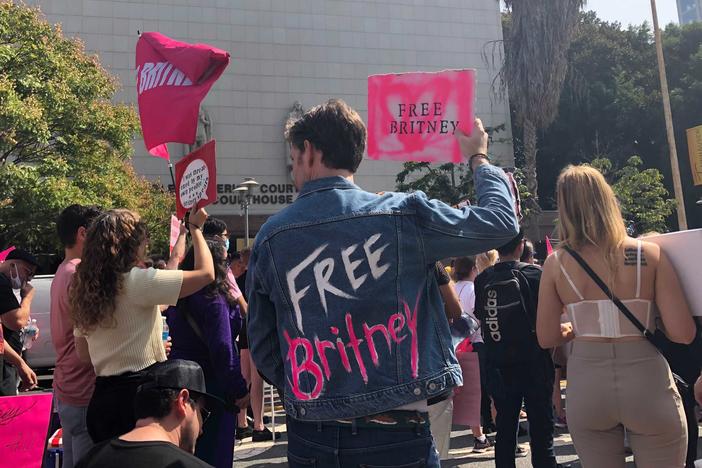 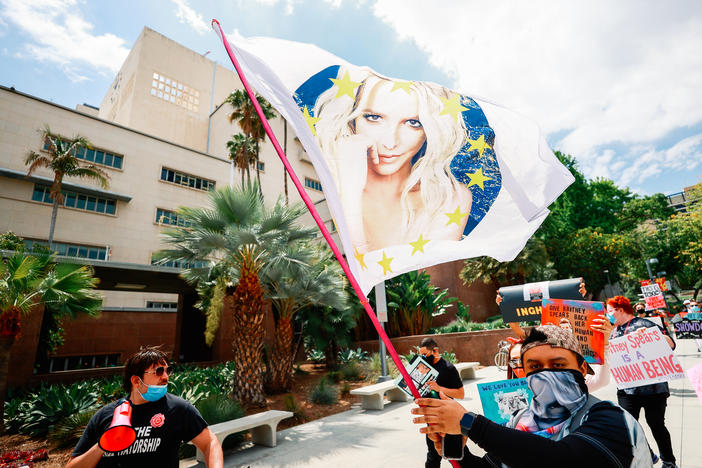 Britney Spears Has Moved Toward Freedom From Her Father

Spears and her father petitioned to end his conservatorship role. A Los Angeles judge has granted that request. 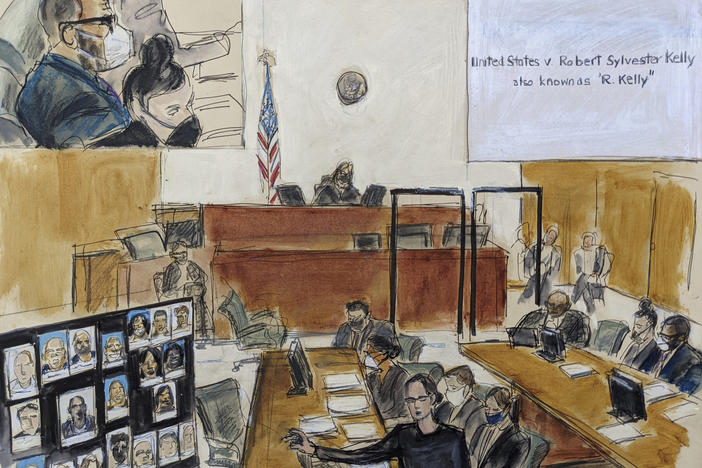