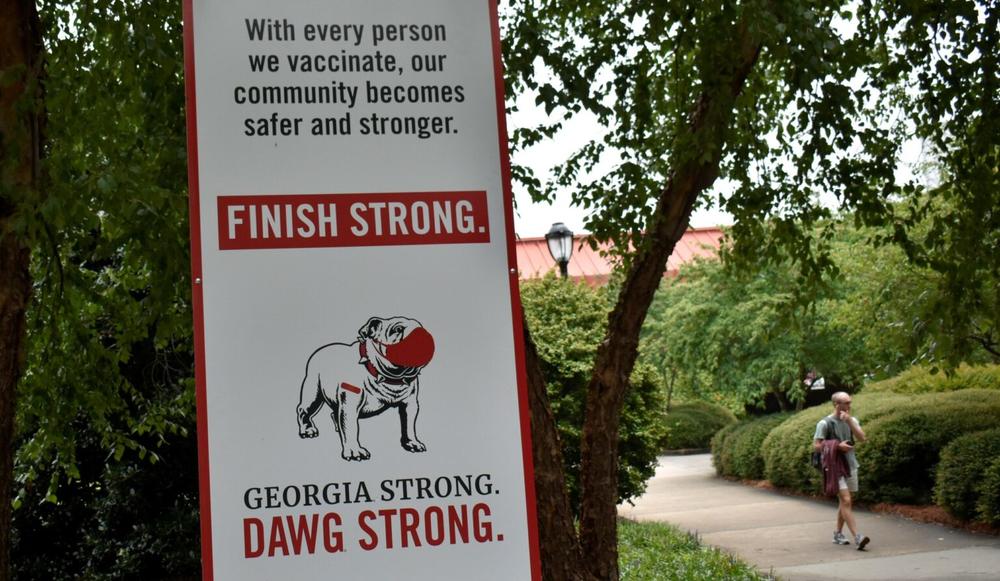 A sign at the University of Georgia encourages students to get their vaccines. Many employees and contractors who do federal work there and at Georgia Tech will soon be required to receive COVID-19 shots.

In an abrupt turn, at least two Georgia universities, the University of Georgia and Georgia Tech, will comply with federal guidance mandating that COVID-19 vaccines will be required for all employees who work on or in connection with a federal contract or who work in a covered contractor workplace.

Those on campus will also be required to follow Centers for Disease Control and Prevention guidance on masks while in covered contractor workplaces, which will likely include a large portion of campus.

The mandates do not apply to students, except for those considered employees, such as teaching assistants and student workers.

What constitutes “in connection with” was not immediately clear, but at Georgia Tech, the affected workers will include “employees who perform support functions such as human resources, billing, legal review, and other support functions” as well as “employees who are in the same workplace as employees working on or supporting federal contracts but who do not themselves work directly on or in connection with the federal contract,” according to tweets from biology professor Joshua Weitz.

According to UGA’s release, the affected workers will have until Dec. 8 to be fully vaccinated, which leaves little time for vaccine-hesitant workers to make their arrangements.

Under federal law, that means they must receive their final dose by Nov. 24, the Wednesday before Thanksgiving. In order to meet that deadline, an employee who wanted to get the Moderna vaccine would need to receive their first dose Wednesday, the day after the universities made their announcements.  Workers who get the Pfizer shot can wait until Nov. 3 for their first dose.

The University System of Georgia previously encouraged masks and vaccines but forbade professors from mandating them in their classes, sparking protests at some universities.

The rapid change also contradicts the repeated mantra of Gov. Brian Kemp, who has argued that mandating masks and vaccines would amount to government overreach and cause divisiveness.

Kemp pledged to sue the Biden administration last month after the White House revealed its federal vaccine requirements, and that suit could come as soon as this week, the Atlanta Journal-Constitution reported Tuesday.

“Brian Kemp and (Attorney General) Chris Carr’s lawsuit is nothing more than a dangerous political stunt,” said Rhyan Lake, spokeswoman for the Democratic Party of Georgia. "Rather than put partisanship aside to get Georgians vaccinated, Georgia Republicans have decided to wage a war on the side of COVID-19."

Not all University System of Georgia institutions will be affected.

The University of North Georgia told employees in an email Tuesday that the University System of Georgia and the Georgia Attorney General’s office are evaluating all legal requirements related to the order, but the school does not receive any federal contracts that are subject to the vaccine requirements.

“This information is subject to change, and we will keep the University community updated on its impact,” the email reads. “In the meantime, we continue to strongly encourage all students, faculty and staff to get vaccinated either on campus or with a local provider and to wear a face covering when inside campus facilities.”

Last month, Georgia’s public university leader reaffirmed the system’s policy that its 26 schools should encourage masks and vaccines on campus, but not require them.

The university’s communications department did not respond to request for comment in time for publication.