Hindu priestesses fight the patriarchy, one Indian wedding at a time 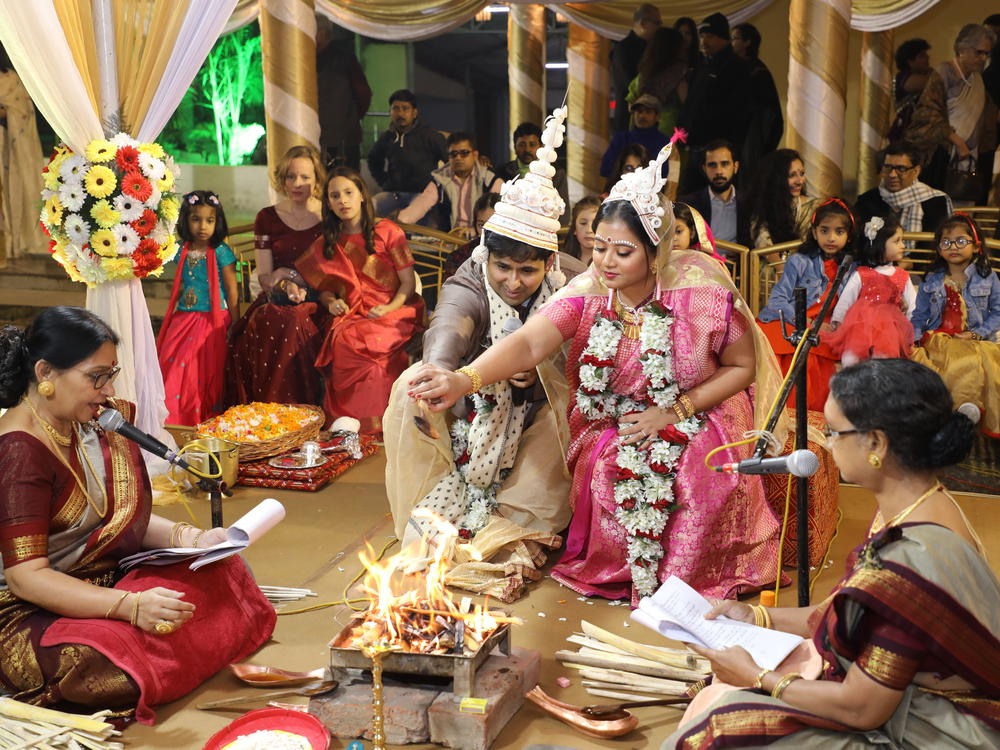 Sharmistha Chaudhuri (center, wearing pink), 35, at her wedding in Kolkata, India, in January 2020. Chaudhuri found some Indian wedding traditions retrograde, so she hired four feminist priestesses to officiate at hers. They performed a multilingual, egalitarian ceremony stripped of patriarchal traditions.

KOLKATA, India — When Sharmistha Chaudhuri decided to get married in her native India, she faced a dilemma.

Chaudhuri, 35, is a PR professional in Austin, Texas. She's independent, educated and has traveled the world. She wanted her wedding to reflect her liberal values and the equal partnership she has with her American fiancé.

But Chaudhuri found some Indian wedding traditions patriarchal. Hindu weddings are usually officiated by male priests. The bride's parents "donate" her to her in-laws. It's typically only the bride, not the groom, who prays for her new family's longevity — and gets her forehead anointed with colored powder to signify she's married.

"I just knew that I didn't want to do this," Chaudhuri recalls. "It was more like, 'How can we do something less traditional?'"

Her like-minded mother found a solution: Instead of priests, they hired four Hindu priestesses to perform a multilingual, egalitarian ceremony, stripped of patriarchal traditions. 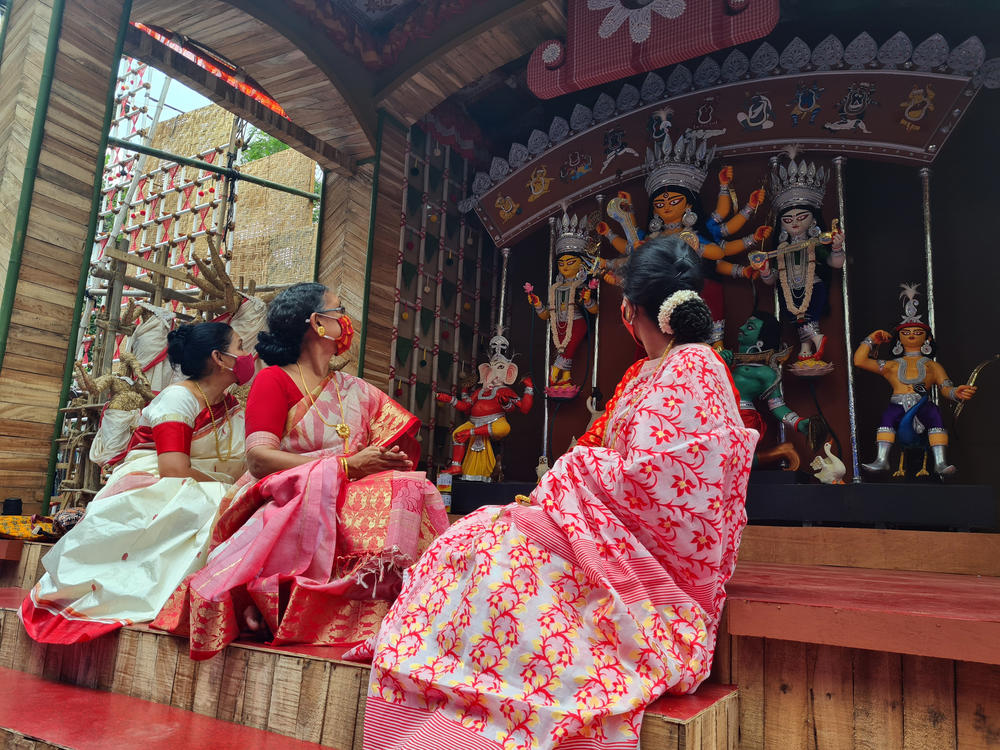 Members of Kolkata's Shubhamastu priestess group, from left to right: Sanskrit scholar Nandini, who goes by one name, Ruma Roy and Paulomi Chakraborty. The priestesses spoke to NPR at a stage set up in downtown Kolkata, where they are officially taking part in India's Durga Puja festival this week for the first time.

The priestesses belong to a Kolkata-based collective known as Shubhamastu — "let it prosper" in the ancient language of Sanskrit — that began revising Hindu wedding liturgy about 10 years ago. Two are Sanskrit scholars with decades of academic experience. Along with the traditional wedding chants, they often incorporate secular hymns with lyrics by Indian poet Rabindranath Tagore, who was awarded the Nobel Prize for literature in 1913.

The Shubhamastu collective is part of a feminist push to make one of the world's oldest religions more inclusive and appealing to younger and more progressive adherents. They are working in one of India's most liberal states, West Bengal, but have won fame across the country.

For the first time, female clergy are joining rituals honoring a Hindu goddess

They're not just officiating at weddings. This week, for the first time, the Shubhamastu priestesses are presiding over rituals at one of India's biggest festivals, an homage to the Hindu goddess Durga. Traditionally, only male priests have performed the Durga Puja rituals, which are most popular in Kolkata but are observed across the country. This year, after the death of a veteran priest, the four priestesses were invited by festival organizers to play an official role at the main celebration in Kolkata, alongside their male counterparts. 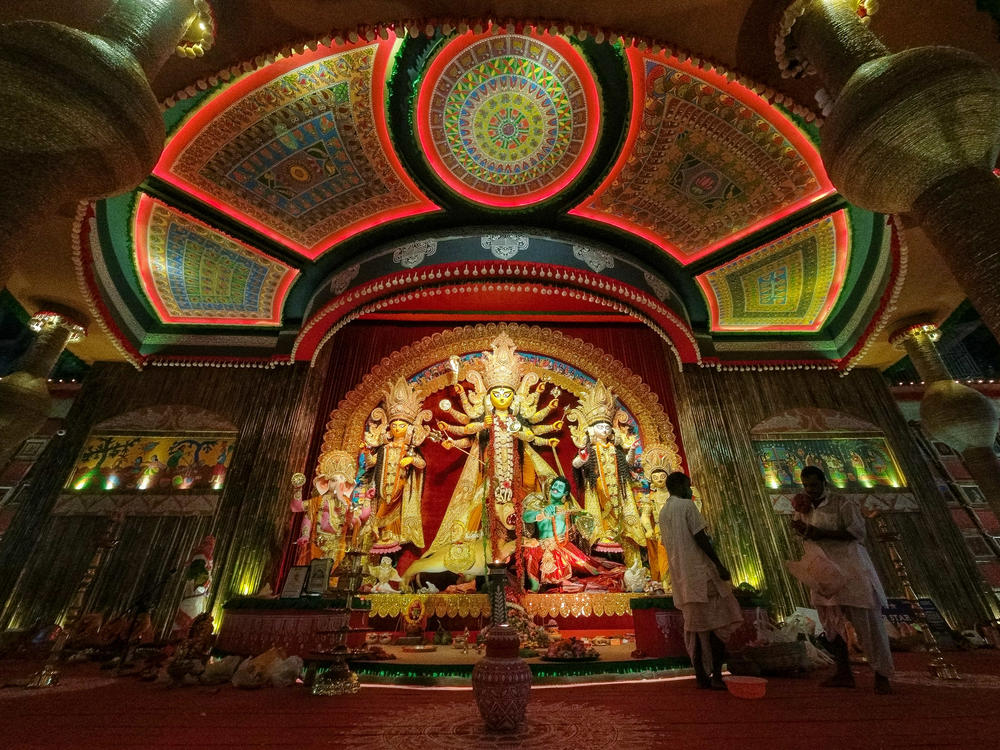 A Durga idol during this month's Durga Puja festival in Kolkata, India.

Hinduism has no central doctrinal authority — unlike Roman Catholicism, for example, which has the Vatican. So there is no universally accepted ordination scheme for Hindu priests. While the vast majority of them are Brahmin men — members of what's perceived as Hinduism's highest caste — female clergy have long been around, albeit in very small numbers. (Experts say they number in the hundreds or possibly low thousands in this country of nearly 1.4 billion people.)

"You have to be confident, you have to study hard," says Nandini, a Shubhamastu priestess who recently started using only one name to avoid revealing her caste. "But you can become priests by profession. Why not?"

On hiatus from her job as a professor of Sanskrit at Kolkata's Jadavpur University, Nandini, 60, claims as much right to interpret — or reinterpret — Hindu scripture as any other priest.

"I have just omitted those portions [of Hindu wedding liturgy] which are regressive to women. Like kanyadaan, the donation of the daughter to the husband and in-laws," she explains. "How can I keep that, when women of today are so enlightened? They are empowered! Most of them are working." 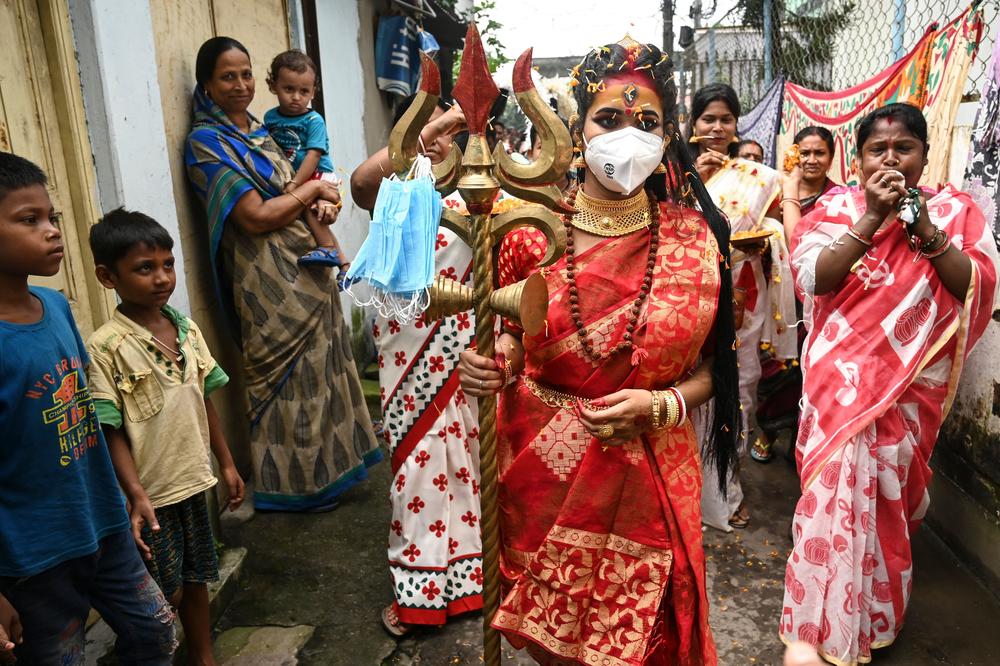 A youth dressed as the Hindu goddess Durga distributes face masks as part of a COVID-19 awareness campaign ahead of the Durga Puja festival in Kolkata on Oct. 10.

In India, Hindu weddings are governed by the Hindu Marriage Act of 1955, which sets the legal marriage age for women as 18, and for men as 21. It says marriages may be solemnized in accordance with "customary rites and ceremonies," and mentions the Hindu practice of circling a sacred fire seven times — but does not require it. It does not legislate the gender of the officiant, nor any liturgy.

Nandini says she and her fellow priestesses' phones have been ringing off the hook since their role in the Durga Puja festival was announced a few months ago. They've officiated hundreds of weddings over the past decade, and are currently booked through late 2022. In addition to weddings — including those of both of her daughters — Nandini also officiates at memorial services and housewarming blessings.

But that wasn't always the case.

"In the beginning, we got very few calls. People naturally did not believe in us. They thought, 'What will the women do?'" Nandini recalls.

Once, after she married a couple, a conservative relative of the newlyweds hired a male priest to come in and repeat the ceremony afterward, just to make sure it was valid. 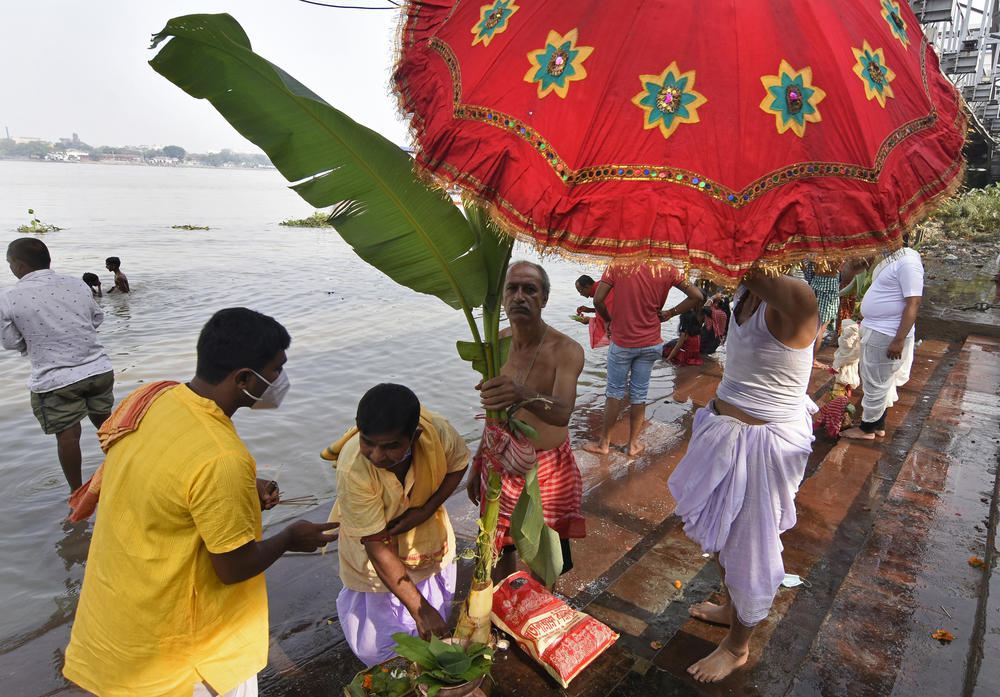 "You can't blame them, you know? This is such an age-old belief," she says. "It will take time to change."

But Nandini thinks India and Hinduism are ready for this change. Hungry for it, even.

Indian courts in recent years have backed women's access to certain Hindu temples that used to restrict their entry. A recent TV ad for Indian bridal fashion features a top Bollywood actress playing a bride who questions the kanyadaan tradition of "donating" a bride to her in-laws. The ad received praise, but also some criticism from conservatives. 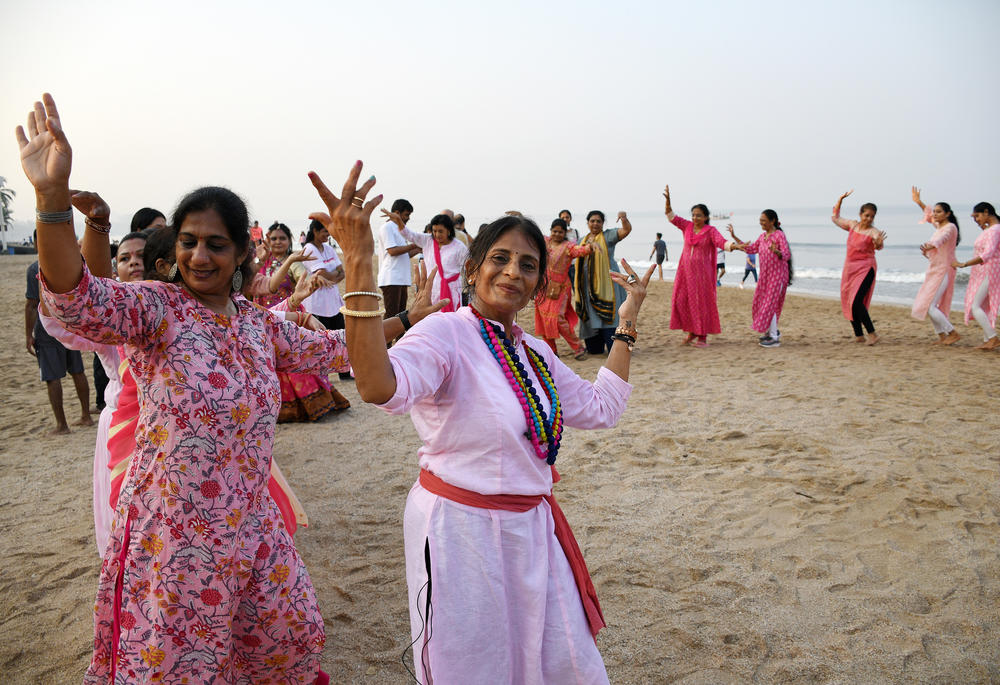 Women dance on Juhu beach in Mumbai during the Durga Puja festival.

Sudeshna Chakraborty has heard from some conservatives. Inspired by the four Shubhamastu priestesses, Chakraborty left her job five years ago as a customer service executive with one of India's biggest corporations, Reliance, to study Sanskrit and scripture full-time. She's since been awarded a certificate in Sanskrit from West Bengal's Visva-Bharati University, and last year began officiating at weddings.

"Some people used to call me up and say, 'How can you do this? What is the reason behind it?'" she recalls.

She says she's never received a direct, specific threat related to her work as a priestess. But she nevertheless recently registered with a local human rights organization and keeps its phone number programmed in her phone, just in case.

For every harassing phone call, Chakraborty says she gets many more from women who want to follow in her footsteps. This year, she started teaching a handful of them. 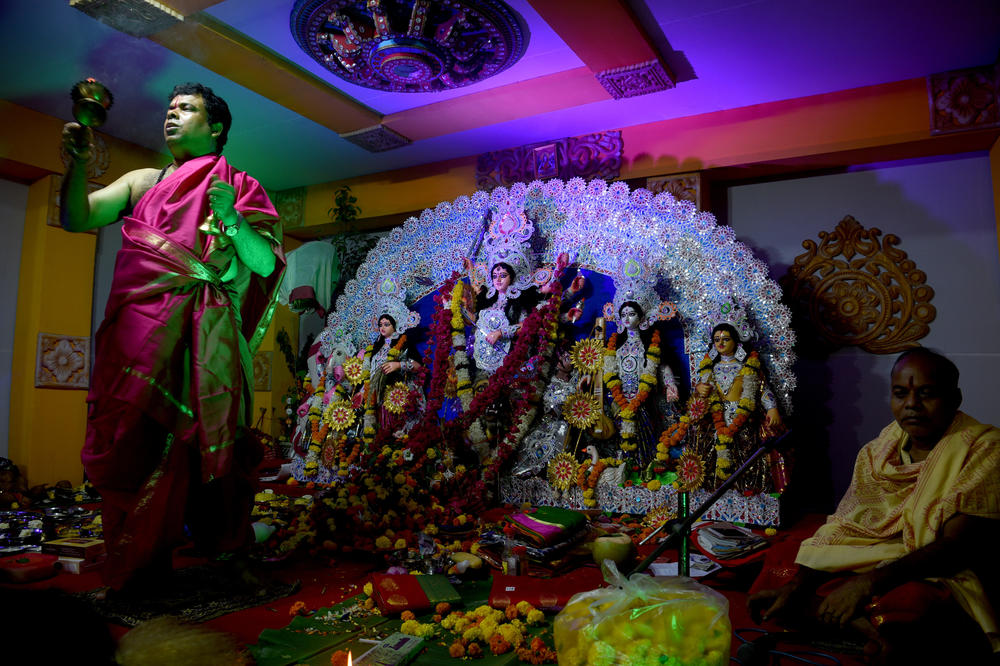 A dance performed during Durga Puja in Mumbai.

Sanskrit mantras, chanted in unison, ring through the third floor of an old colonial building in downtown Kolkata. It's where Chakraborty holds classes for priestesses-in-training. She's affiliated with an events planning company that handles weddings.

"After a few times practicing this, I got confident in myself," says one of her students, 38-year-old Tina Halder, who comes from one of India's oppressed castes. "We can change this and break the rules. It feels good."

Breaking the rules feels good for the wedding couples, too

Chaudhuri, the bride based in Texas, was married by the Shubhamastu priestesses in Kolkata in January 2019. About a year later, the pandemic erupted. Under lockdown, she and her husband had lots of time to watch their wedding video. 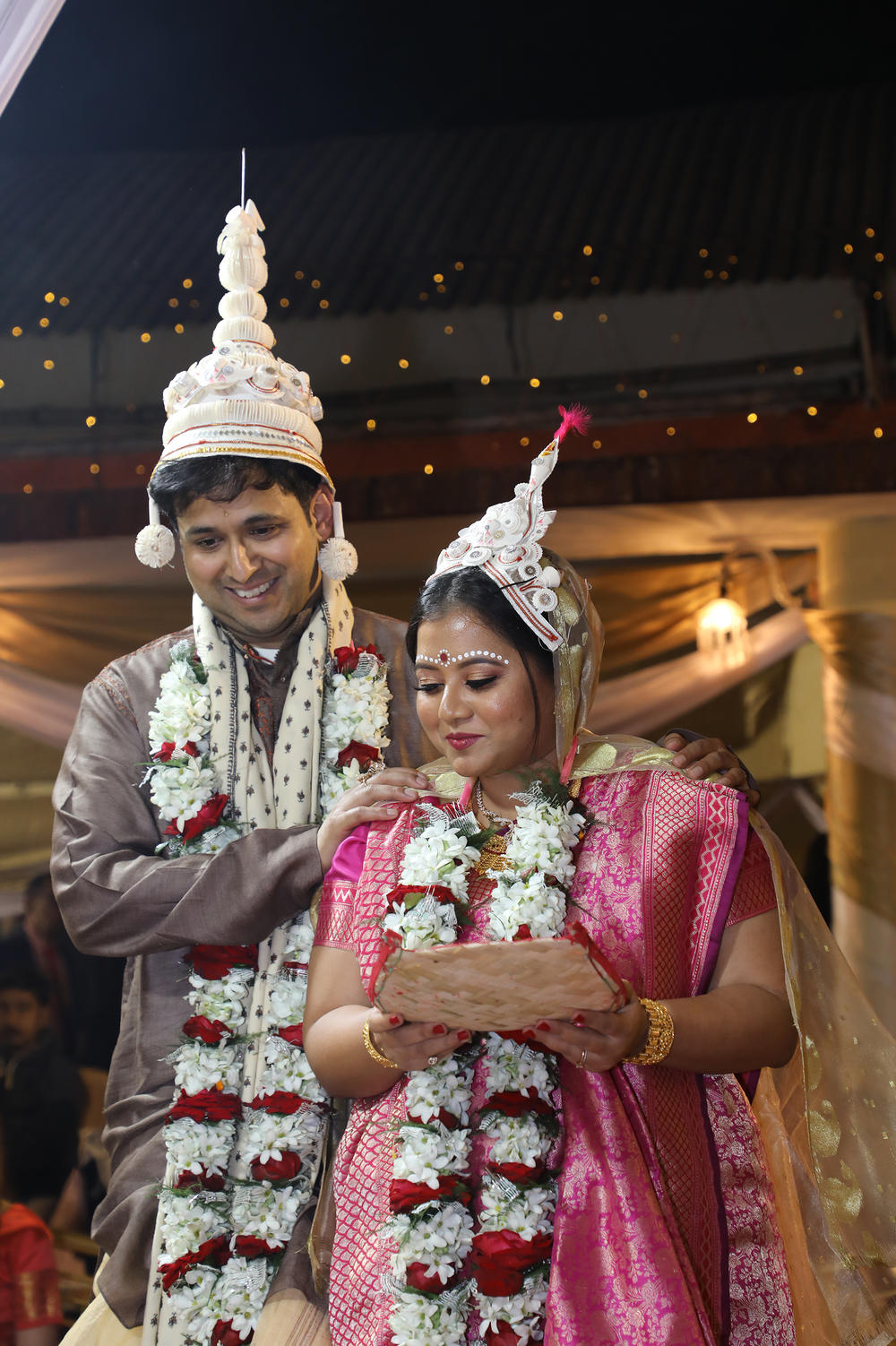 "How can we do something less traditional?" Sharmistha Chaudhuri wondered before her wedding. The egalitarian ceremony that she and her husband opted for was conducted in Bengali, Sanskrit and English. Their wedding guests were so enthralled, she says, that some even forgot to eat.

It shows Chaudhuri in a shimmering, salmon-pink outfit — not the traditional red color which most Hindu brides wear. It shows her and her fiancé proceeding into the ceremony together. Neither one was "donated" to the other. It shows them anointing one another's foreheads with colored powder.

And it shows their guests captivated by a rare Indian wedding that they could actually understand, because the ceremony was in Bengali, Sanskrit and English. People may have even forgotten to eat — something that never happens at Indian weddings, Chaudhuri jokes.

"We look back at certain parts of the ceremony and just laugh and smile," she says. "There's nothing we would cringe at. I would say that's pretty good." 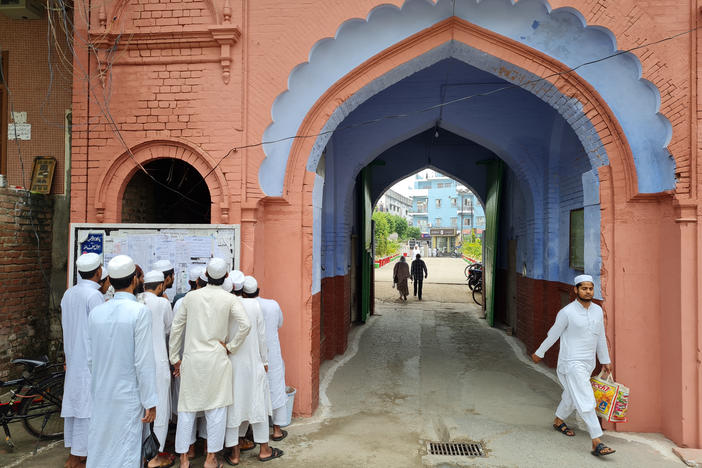 The Taliban's Ideology Has Surprising Roots In British-Ruled India

The Taliban's ideology has distant links to India. Scholars say Afghanistan's new leaders might listen to clerics in the birthplace of Deobandi Islam, though the clerics deny ties with the Taliban. 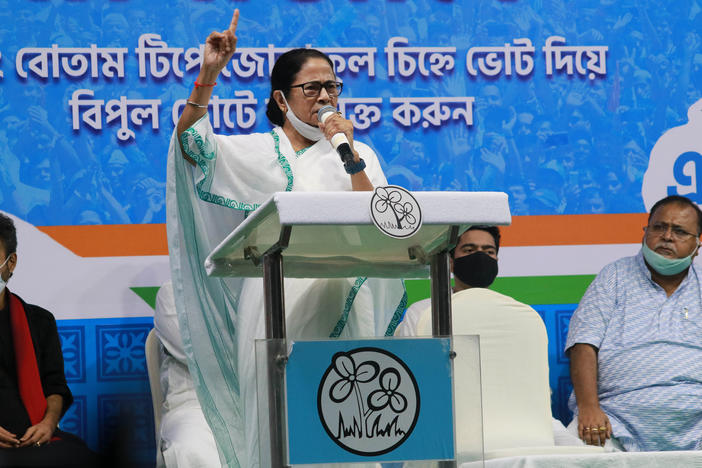 Meet the feisty, 5-foot-tall thorn in the side of India's prime minister

Mamata Banerjee, chief minister of West Bengal state, is one of Narendra Modi's fiercest critics. She's especially beloved by women and the impoverished. But gaining national traction may be tough. 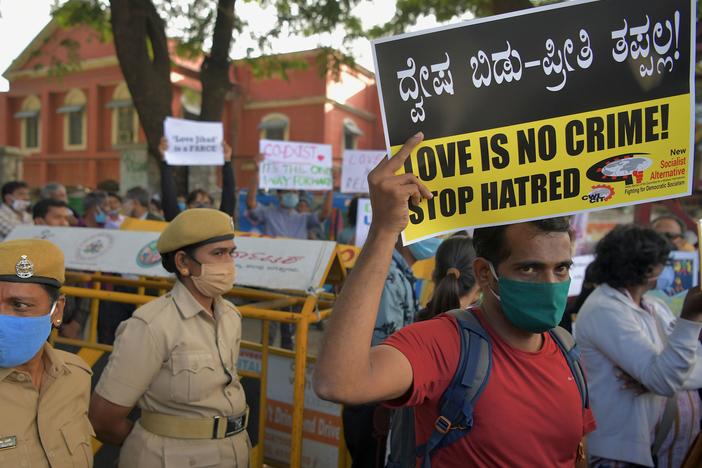 In India, boy meets girl, proposes — and gets accused of jihad