Daniel Craig's tenure as James Bond is coming to an end with the release of No Time To Die. But with Amazon acquiring MGM, where does the 007 franchise go from here?

The James Bond franchise is Hollywood's longest-running franchise and also one of its biggest moneymakers. Its latest title "No Time To Die" opened on Friday. But after six years away from theaters, 007 faces a new younger audience that cares a lot about the treatment of women and diversity. Sally Herships over at The Indicator From Planet Money looks at the evolving business of Bond with the help of our London correspondent Frank Langfitt.

SALLY HERSHIPS, BYLINE: Bond makes a lot of money. Domestic box office alone earned nearly $6 billion. That is adjusted for inflation. Now, that does put the Bond movies behind Marvel and "Star Wars" but still ahead of "Batman" and "Harry Potter."

FRANK LANGFITT, BYLINE: Bond is really valuable to corporate brands as well. "No Time To Die" has at least 30 product placements - everything from Aston Martin to Omega, the luxury watch brand.

HERSHIPS: It's a symbiotic relationship. The Bond brand helps sell these products, and corporate ads like this one help sell movie tickets.

UNIDENTIFIED PERSON: Introducing the new Land Rover Defender - it has an iconic shape that never fails to make an impact.

STACY JONES: It's tens of millions of dollars of savings when a brand is helping to utilize their media channels and to direct eyeballs from consumers where the film would not naturally be able to even advertise. That's extremely valuable. It's a difference of making profits and not making them.

HERSHIPS: But in order to do that, Bond needs to remain relevant, and that means building new audiences who are younger, which is not a given, given the way that Bond is known for having treated women in the past.

LANGFITT: Bond was so bad that even his boss, M, gives him a really hard time in 1995's "Goldeneye."

JUDI DENCH: (As M) You're a sexist, misogynist dinosaur - a relic of the Cold War.

HERSHIPS: Very subtle - so how do producers sell a character with a past like this? Frank, you've seen "No Time To Die." What is the strategy here?

LANGFITT: Yeah. So, like, over the last four installments with Daniel Craig, they've been, I think, slowly writing it out of the character. And for "No Time To Die," they recruited Phoebe Waller-Bridge. She polished the script. And that misogyny, I think, is pretty much gone. And I've got to say, this movie feels really different to me than a lot of other Bond movies. There's a strong love story. One of the themes is family, and Bond is monogamous.

HERSHIPS: So if the women are not there just to hop into bed with Bond, what are they there for?

LANGFITT: Well, the two main characters that he works with are fellow spies. And brace yourself, Sally. They're strong, three-dimensional characters, and they're diverse.

HERSHIPS: These are women we're talking about?

LANGFITT: These are women.

LANGFITT: These women, they're great in fight scenes and shootouts. They're very funny. And warning - a little spoiler here - near the beginning of the film, Bond is retired. And a fellow female agent, a Black woman named Nomi - she takes over Bond's 007 number.

LASHANA LYNCH: (As Nomi) The world's moved on, Commander Bond.

DANIEL CRAIG: (As James Bond) You're a double-O?

LYNCH: (As Nomi) Two years. You get in my way, I will put a bullet in your knee.

LYNCH: (As Nomi) The one that works.

HERSHIPS: She sounds like she means business. So how are these new kind of kick-ass female characters going over, particularly with younger fans?

LANGFITT: They seem to go over pretty well. I was talking to a woman named Eleanor Biggs (ph). She's 25. She says she really liked these new female spies.

ELEANOR BIGGS: Absolutely obsessed with them - I thought they were so great.

LANGFITT: And it's funny 'cause Eleanor - she spent her childhood actually trying to avoid going to Bond movies with her dad and brother. And she said "No Time To Die" was refreshing.

LANGFITT: Sally, of course, it's worth remembering, as you're listening to Eleanor, the response to Bond, it's always going to be a bit more positive here in Britain than it might be in the States. Many Brits see him as a patriotic hero. I talked to a lot of people who really like Bond here. And also, Bond is a global franchise these days, so not everybody who sees Bond is going to view some of the cultural shifts that we're talking about through the same lens as maybe some Americans would.

HERSHIPS: Still, the Bond movies are now six decades old. So as producers think about adapting and expanding their audiences, they may want to look at how producers of other film franchises have transformed their big selling characters, like in the comic book world.

Stacy of Hollywood Branded used to work with X-Men. She says the producers were only interested in brands that would appeal to male audiences. But she says that Marvel has expanded that narrow demographic by universes.

JONES: They have created such a wide breadth of characters of every color, every sexuality. Their storylines are strong.

LANGFITT: And, Sally, speaking of adaptation, the Bond producers are now going to have to work with Amazon, which is buying MGM. That's Bond's parent company. And Amazon is saying it wants to kind of reimagine and develop the studio's intellectual property with reboots and spinoffs.

HERSHIPS: Which is what Marvel has done with shows like "WandaVision" on Disney Plus, which is also home to the "Star Wars" series "The Mandalorian."

LANGFITT: And Steven Blume - he runs Content Partners. This is a company that acquires films, TV shows and their royalties. And he says the Bond producers need to do their own spinoffs to keep up with all this competition.

STEVEN BLUME: You have these amazing iconic characters. And why not tell their stories and expand this thing into a universe? I mean, it's ripe for it. And who better to do it than Amazon?

LANGFITT: Yeah. So Steven says, like, why not build a TV series or a movie around somebody like Q, who designs Bond's cool cars and gadgets?

BLUME: You tell the backstory of Q and how he met Bond and their relationship, and you make Bond the secondary character. I mean, people would love that.

LANGFITT: But I've got to say the idea of these spinoffs, the Bond producers - they might hate it. You know, Bond's this family business. Barbara Broccoli and her half-brother, Michael Wilson, they have an ironclad creative control - rare in Hollywood. And they're keeping it under the Amazon deal. And they kind of see themselves as custodians of the 007 legacy.

HERSHIPS: But Steven says sticking with the old Bond game plan is risky.

BLUME: As far as I'm concerned, they should come into this century. If they don't change with the times, they're just going to let it die.

HERSHIPS: Which sounds like another Bond title - but of course, the producers will have to make one big and very critical change very, very soon because Daniel Craig is leaving. And that means choosing a new Bond. Stacy from Hollywood Branded has some thoughts about this.

JONES: You're absolutely going to look for a man of color. If they want to have a feel of Bond and relevancy, they're going to have to look at something other than just a very sharply dressed, older white male.

LANGFITT: What about a female Bond?

JONES: I think that's going to be harder. I think that's - you have such a male demographic built in, you'll cut off your audience at the knees if you just decide that you want to go all-in for a female.

HERSHIPS: I mean, women make up half the population on the planet. What about selling more tickets to them?

As for "No Time To Die," it's off to a strong start. Through last weekend, it took in about $120 million in 54 foreign markets - not too shabby. And that's before opening in the world's two biggest ones here in the United States and China. And crazy idea - female James Bond. I volunteer.

LANGFITT: I would pay money to see that. 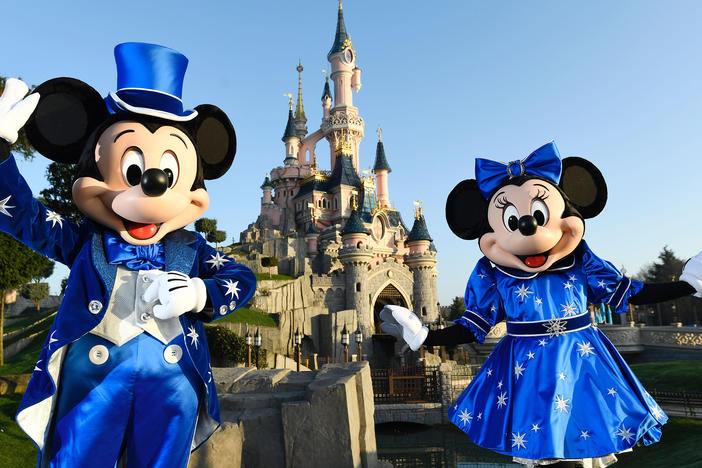 Susan Arnold has been elected as chairman of the Walt Disney Co. Arnold will be the first woman to hold the position at Disney. 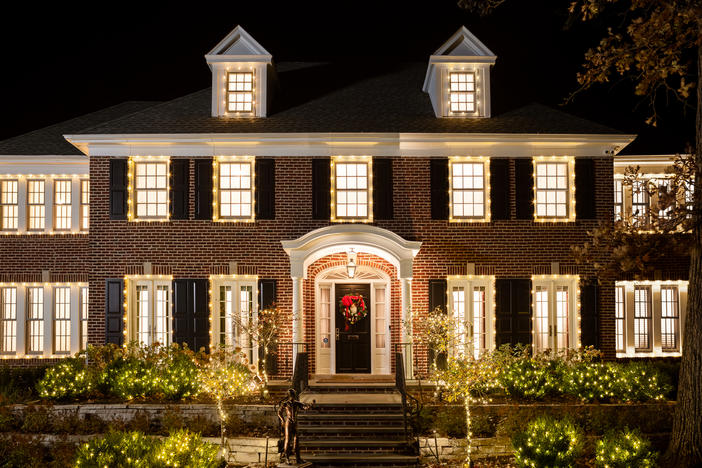 The 'Home Alone' house could be yours for a night

The McCallister family home will be available to rent on Airbnb later this month. The overnight stay will include junk food, booby traps and "ample opportunity to scream into the mirror." 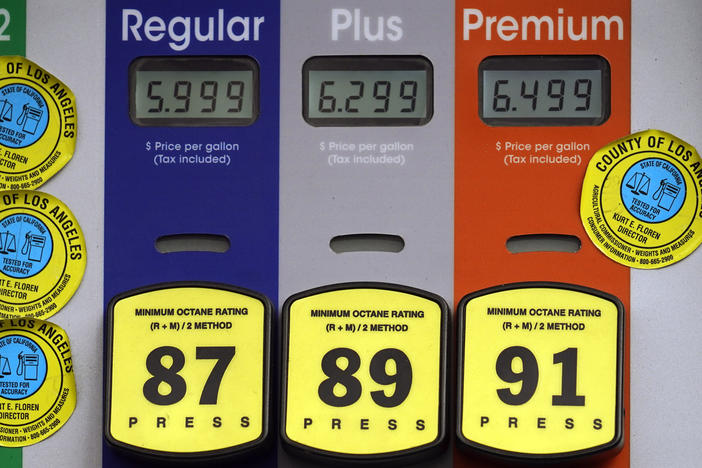 Gasoline prices are surging. Can Biden actually do something about it?

Presidents don't set the gas price you pay at the pump, but they're often blamed for it. And right now, high energy prices are helping send inflation to an over 30-year high.