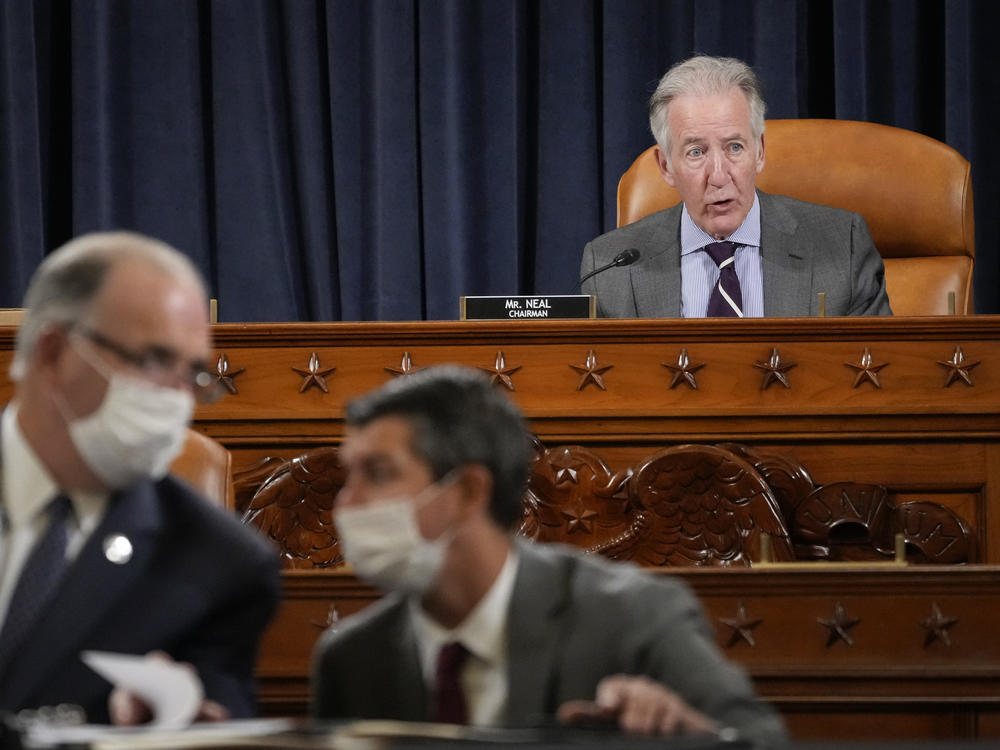 Rep. Richard Neal, D-Mass., chairman of the House Ways and Means Committee, has proposed rolling back much of the 2017 GOP tax cuts to help pay for President Biden's $3.5 trillion social spending plan.

Democrats hope to unwind many of the tax cuts Republicans enacted under former President Donald Trump as a way to pay for the majority of the $3.5 trillion spending bill currently under consideration in Congress.

House Ways and Means Committee Chairman Richard Neal, D-Mass., released details Monday of a plan that includes increasing the top corporate tax rate to 26.5%, up from the current rate of 21%, and restoring the top rate to 39.6% for individuals earning more than $400,000 and married couples earning over $450,000.

The changes are part of the tricky balancing act plaguing Democrats' efforts to approve the bulk of President Biden's domestic agenda. Leaders are attempting to prove to skeptics within their own party it is possible to finance a vast expansion of federal spending on everything from housing and health care to financial support for families and climate change — all without increasing taxes on everyday Americans.

"Our proposals allow us to both address our perilously changing climate and create new, good jobs, all while strengthening the economy and reinvigorating local communities," Neal said in a statement. "Taken together, these proposals expand opportunity for the American people and support our efforts to build a healthier, more prosperous future for the country."

Taxes would offset some of the $3.5 trillion budget bill

Neal and other leaders hope to convince centrist Democrats in the House and Senate to accept trillions of dollars in new spending as long as it doesn't involve adding to the mounting federal debt and deficit. Democrats have virtually no room for error as they attempt to pass the spending bill using special budget rules to avoid a GOP filibuster.

To pass the legislation, leaders will need to get all 50 Senate Democrats and virtually every House Democrat to vote for the bill.

Tax writers on the Ways and Means Committee are proposing a lengthy list of tax changes that are meant to fit together like a jigsaw puzzle to offset much of the spending. The Joint Committee on Taxation, the nonpartisan body tasked with assessing the revenue impact of tax policies, estimates the tax changes will raise around $2.073 trillion. Democrats say they expect long-term economic impacts from the bill could drive the revenue estimates up even further.

Senate Minority Leader Mitch McConnell, R-Ky., has branded the plan a "reckless tax-and-spending spree" that would leave Americans deeply enmeshed with the federal government. Republicans have unanimously rejected the plan, going so far as to say they will not work with Democrats to pass a routine increase to the federal debt limit while Democrats pursue new spending.

The changes range from small-bore items, such as increasing taxes on nicotine and tobacco products, to significant reversals of tax cuts passed by Republicans. In addition to the rate hikes for corporations and individuals, Democrats want to increase taxes on capital gains and overhaul taxes for businesses that operate as pass-through entities.

Democrats haven't agreed on how much to spend

Democrats frame the 2017 tax cut bill as a massive handout to corporations and the wealthy and have long promised to roll back many of those tax changes seen as signature achievements of the Trump administration.

It is a difficult sell for some more centrist Democrats representing districts and states where Trump and his policies are still popular, and where voters are concerned about rising prices from inflation.

Centrists such as Sens. Joe Manchin, D-W.Va., and Kyrsten Sinema, D-Ariz., have said they won't accept the $3.5 trillion spending figure — at least not right now.

Manchin has asked leaders to pause work on the bill to see how existing spending programs, such as the $1.9 trillion American Rescue Plan that passed earlier this year, play out in the economy.

"We have done an awful lot," Manchin said Sunday on CNN's State of the Union. "There's still an awful lot of people that need help. But you have 11 million jobs that aren't filled right now. Eight million people are still unemployed. Something's not matching up."

Other moderates, such as Rep. Stephanie Murphy, D-Fla., are raising similar red flags.

Top Democrats have said for months that the COVID-19 pandemic created a perfect storm of support for the kind of massive redistribution of federal spending Biden has proposed.

Leaders such as House Speaker Nancy Pelosi, D-Calif., call the bill an effort at transformational change. At an event last week in Connecticut, Pelosi said the legislation working through Congress now "is about a vision for our country that is transformative, that frees people to reach their aspirations without concern that their children or their parents or their disabled relative are not cared for."

"There is so much disparity in our country," Pelosi said. "This bill is long overdue."

Democrats generally agree on many of those goals but are facing stark divisions over whether the country can afford the financial impact of the spending. 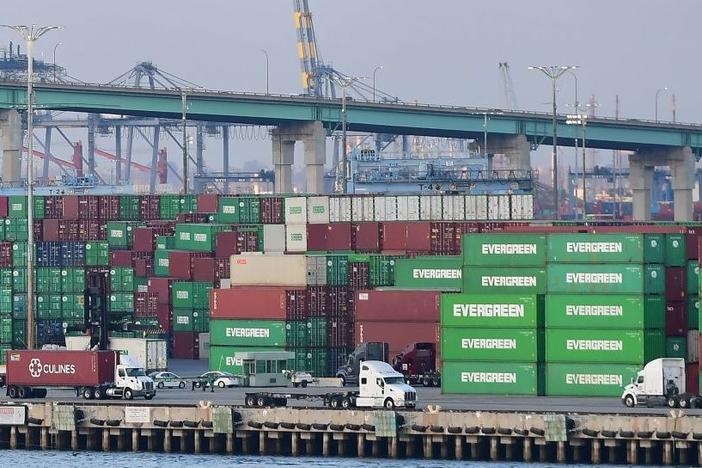 There's a backlog at U.S. ports. Here's how Biden hopes to get you your goods, faster 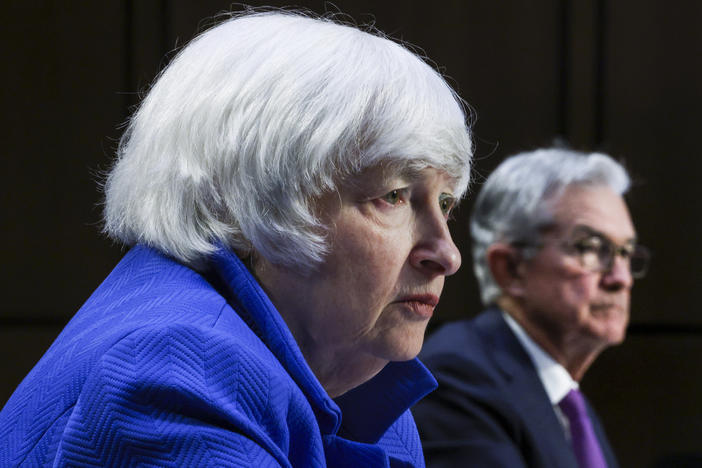 Janet Yellen Says U.S. Could Run Out Of Cash To Pay Its Bills In Less Than 3 Weeks

Treasury Secretary Janet Yellen warned lawmakers the government could run out of money by Oct. 18 unless Congress raises the debt ceiling. 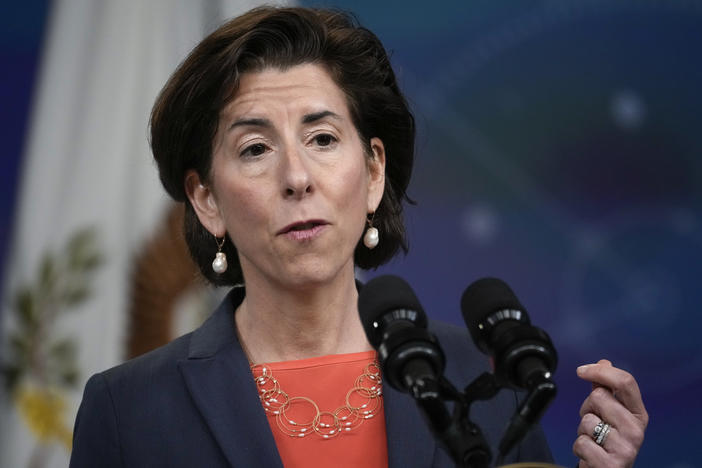 The Chinese government is blocking its airlines from buying Boeing airplanes, Raimondo said. She criticized Beijing for its trade barriers and is pushing for more investment in U.S. manufacturing.