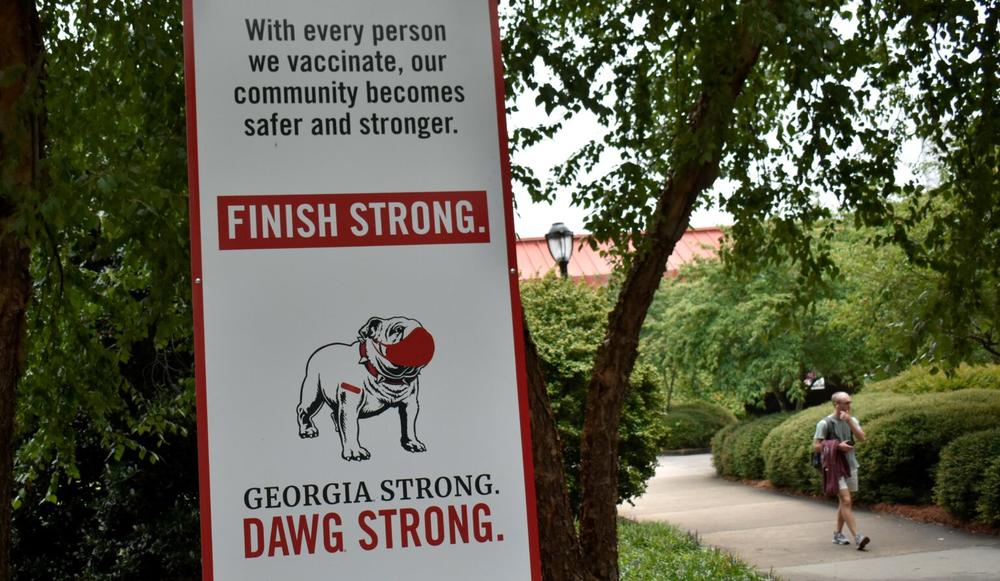 A sign at the University of Georgia encourages students to vaccinate and mask up. Some professors want face coverings to be required.

College students across Georgia are back to hitting the books and tablets as a new semester began this month on campuses across the state.

But this fall semester, many professors say they have more than grading and lecturing to worry about.

COVID-19 cases are surging as the delta variant spreads among Georgia’s unvaccinated masses, and some college faculty members are pressing for more aggressive rules on masks and vaccines.

A petition from the University System of Georgia Regents Advisory Council for Biological Sciences demanding universal indoor masking and vaccine requirements secured more than 4,000 signatures from students, faculty and staff.

“As life scientists, the SARS-CoV2 virus and covid disease fall in our domain of expertise,” the group says. “We have a duty to our students and to our faculty and staff colleagues to maintain their health and safety. We also have a duty to counter misinformation and politicization about topics within our expertise; such misinformation and politicization prevents a safe environment for learning and working.”

Cases among 18- to 22-year olds are going up in Georgia, and while young people do not typically suffer severe symptoms from the disease, they can sometimes get seriously ill, and they can spread the virus to others who are more vulnerable.

'A disaster of morale'

David Broad, a sociology professor at the University of North Georgia and a member of the faculty senate there, said a friend recently had a stroke and her family could not be at her side at the hospital because of restrictions implemented due to the overwhelming number of COVID-19 cases. Other faculty members said they have underlying health conditions, young children who are not eligible for vaccines or older family members they care for.

“I think this is a disaster of morale,” said Broad, who is also president of the University of North Georgia chapter of the American Association of University Professors. “Most of the faculty members who I’ve talked to feel a personal threat as a result of this situation, either to themselves or their family. And many of them have concerns about our community, the 20,000 students of the University of North Georgia, if 10,000 of them are not wearing masks, this is a situation right before a spike in coronavirus, so morale is very sad.”

The University System of Georgia encourages students to wear masks indoors, but their policies forbid professors from requiring them, which flouts guidance from the Centers for Disease Control and Prevention. The CDC says people should wear masks indoors regardless of vaccination status in areas with high infection rates.

In one class, she showed students two state Department of Public Health maps of COVID-19 cases side by side.

One, from July 20, showed a map of Georgia with the counties colored mostly yellow, indicating low case numbers. The second map from Aug. 20, was bright red.

“This image got some audible gasps in my 300 person intro psych class,” Frick said in a tweet. “They were stunned. I think assuming many of them know nothing about delta is a safe assumption.”

The disparity between the scientific consensus and campus reality is especially surreal for those who work in the health sciences, said Georgia State University public health professor Dr. Harry J. Heiman.

“My colleagues and I are consulting with public health agencies, businesses and organizations, not only locally but but across the state and, in some cases, across the country, about policies and practices they should put in place to ensure the safety of their customers and employees, and yet we ourselves as a state institution don’t have policies that are aligned with the current evidence and guidelines by the Centers for Disease Control,” he said.

The mood is discouraging, Heiman said, and has led to several resignations across the state and at least one termination.

Cody Luedtke’s job as a lab coordinator at Georgia State’s Perimeter College involved both teaching and lab work — maintaining cultures of amoeba and protozoans, mixing chemicals and reagents — an ideal job for a science lover.

“Every day was different,” she said. “And beyond that, in the larger picture, each semester was different and brought a new opportunity to do things better and improve what we had done in the past, so it was a great job for me.”

But when it came time to start preparing for this semester, she found she just couldn’t do it.

“I don’t even know if I got 10 minutes into it before I just couldn’t go any farther,” she said. “I know it’s dramatic, but I just was, like, weeping in my office because I could not. It was unconscionable to me to bring students into an unsafe classroom, a classroom where masks aren’t required when it’s so easy to require that.”

Luedtke wrote to her department head saying that she could not comply with the mask rules. The email went up the chain of command, and she was told she would need to comply or resign. When she refused, she was terminated, she said.

She said she couldn’t stand the thought of a student in her class becoming seriously ill or dying, bringing the disease home to a vulnerable family member or contributing to the hospital crowding problem.

Luedtke said she’s been overwhelmed with support from colleagues and the public, including a GoFundMe that has raised more than four times the requested amount.

She also said the job hunt is going well, though she does not think she could work for the University System of Georgia soon.

“I could work for the University System of Georgia again if there was a change in leadership, I think, at the Board of Regents level,” she said. “Right now, I don’t feel like they are acting with our safety in mind, and that’s not a work environment I want to be in.”

Pushing back to mask up

University of Georgia math professor Joseph Fu took a different approach. He said he has been requiring masks in his classroom and hasn’t caught any flak from his students or the administration.

“I guess they could try to fire me,” he said. “Somehow, given the circumstances, that doesn’t worry me that much. The other possibility is they could try to ignore me, in which case, I’m advertising that we can do this with impunity.”

Fu said he doesn’t try to hide his rule-breaking but encourages his colleagues to join in. In a recent poll, 51 out of 57 members of the math department said they support required masking.

“It’s like people are afraid of repercussions,” he said. “We’ve been told that we cannot require masks. Well, I guess that, to me, is factually false. I have required masks. It’s an incorrect use of the word ‘cannot.’ But people are cowed by the administration. That’s disappointing to me.”

Another UGA professor abruptly announced his retirement and walked out of the classroom after a student refused to wear a mask properly Tuesday, leaving some students worried about earning enough credits to graduate, according to the student newspaper The Red and Black.

Irwin Bernstein, an 88-year-old psychology professor who had previously retired, told the paper he had underlying health problems that could make the disease lethal.

Last summer, the University System of Georgia planned to keep masks optional but reversed course after outcry from faculty.

This year, Gov. Brian Kemp has made clear his opposition to mask mandates from state agencies, but Broad said he is optimistic that change can come if enough campus employees organize and speak out.

“It’s not just the faculty senate here at UNG or the faculty at UGA or Tech or West Georgia or anywhere else, it’s also other organizations,” he said. "The American Association of University Professors, our chapter at UNG has grown by leaps and bounds in its membership and the pandemic has a lot to do with that. And there’s also a union which has formed in Georgia, United Campus Workers of Georgia. Nothing will get political bodies like the Board of Regents moving faster than labor organization becoming a factor.”