4 Things To Know After The Philippines Kept Its Pact With The U.S. Military 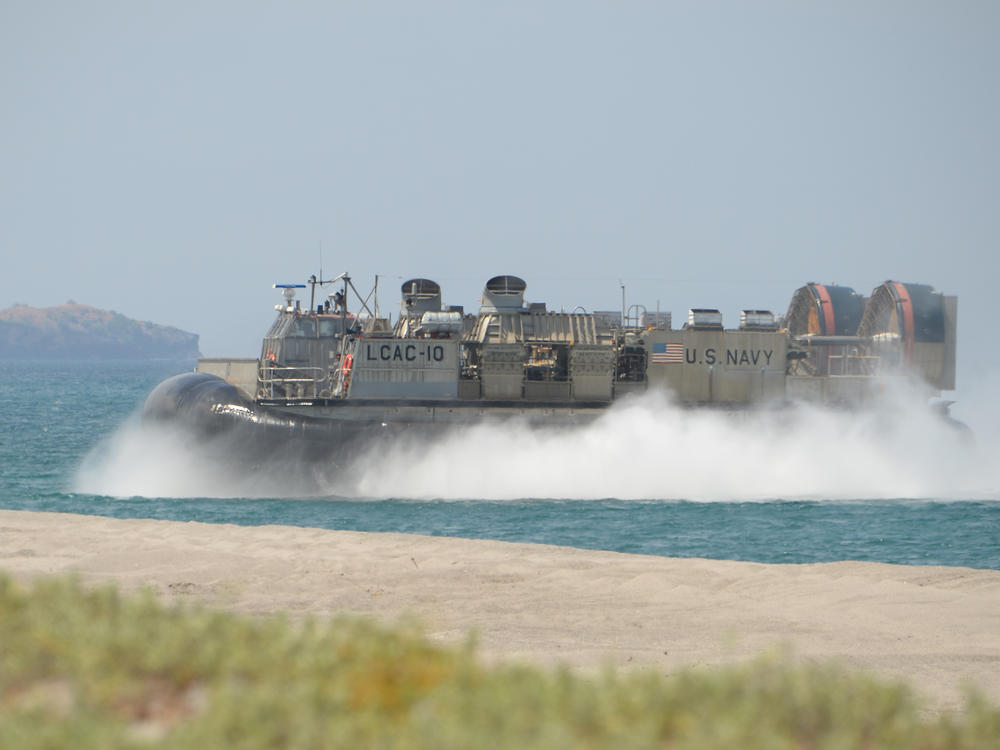 A U.S. Navy hovercraft prepares to hit the beach during amphibious-landing exercises as part of an annual joint U.S.-Philippine military exercise on the shores of San Antonio, facing the South China Sea, in Zambales province, Philippines, on April 11, 2019.

Philippine President Rodrigo Duterte has derided the United States, and courted China, through much of his time in office, putting one of America's oldest alliances in Asia on the back foot. But now, nearing the end of his single six-year term, the mercurial leader appears to be looking more favorably toward the Americans.

Last week, Duterte withdrew a year-and-a-half-old threat to cancel a key security pact with the U.S. — the Philippines-United States Visiting Forces Agreement. The 1998 VFA makes it easier for U.S. forces and ships to operate in the Philippines, including conducting large combat exercises that have alarmed China.

Philippine Defense Secretary Delfin Lorenzana said last Friday that his government retracted its pending termination of the agreement and said, "We are back on track." He was speaking at a joint news conference in Manila with visiting U.S. Defense Secretary Lloyd Austin, who said restoring the VFA was "a very welcome decision." 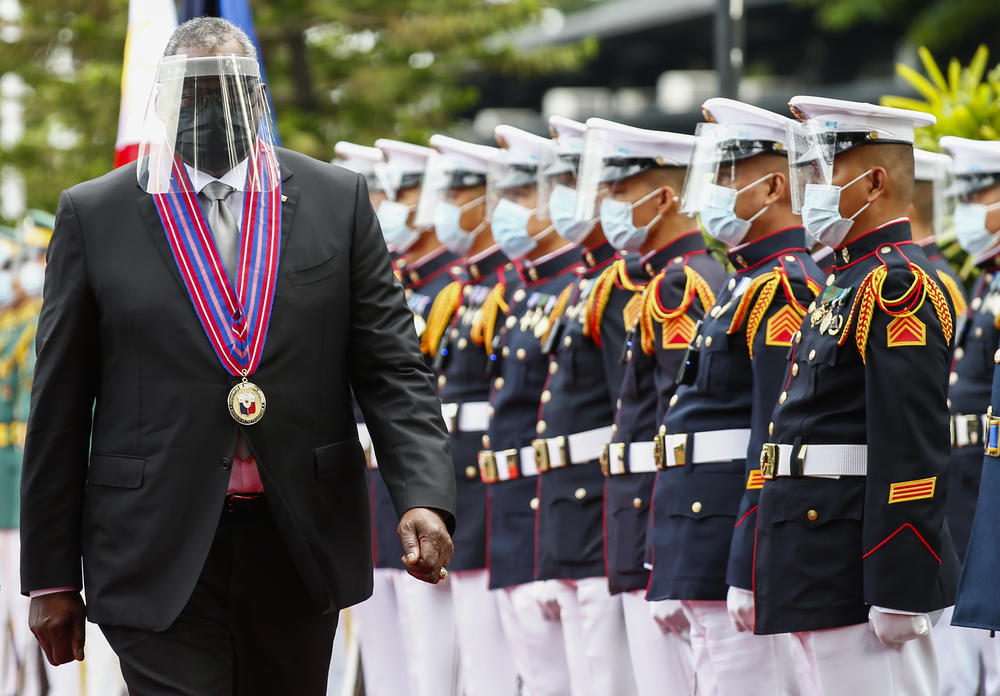 Duterte's turnaround comes at a time of fierce rivalry between the U.S. and China and heightened tensions in the South China Sea. Beijing has aggressively asserted its claim over most of the disputed waters, despite an international arbitration ruling that declared China's claim illegal. And the Biden administration is trying to reinforce relations with Southeast Asian countries that China has been intimidating, including the Philippines.

Here are some important takeaways from the restored agreement.

Duterte said his decision to continue the military arrangement with the U.S. was a "concession" in exchange for COVID-19 vaccines donated by President Biden. Those include more than 3 million Moderna shots that arrived this week, following a similar number of Johnson & Johnson doses in July.

While thanking Biden and the American people for the vaccines during his Monday night televised briefing, Duterte said, "I also gave a concession. I conceded the continuance of the Visiting Forces Agreement."

Duterte later said he would use U.S.-donated vaccines to "entice" Filipinos who have not yet been inoculated to get the shots, amid resurging confirmed daily coronavirus cases in the country.

The public has grown skeptical over the efficacy of the Chinese-made Sinovac vaccine administered in the Philippines. Renato de Castro, a professor of international studies at Manila's De La Salle University, says the Philippine people "do not trust the Chinese vaccine," but they recently "mobbed" a popular Manila mall when Pfizer-BioNTech shots were offered. 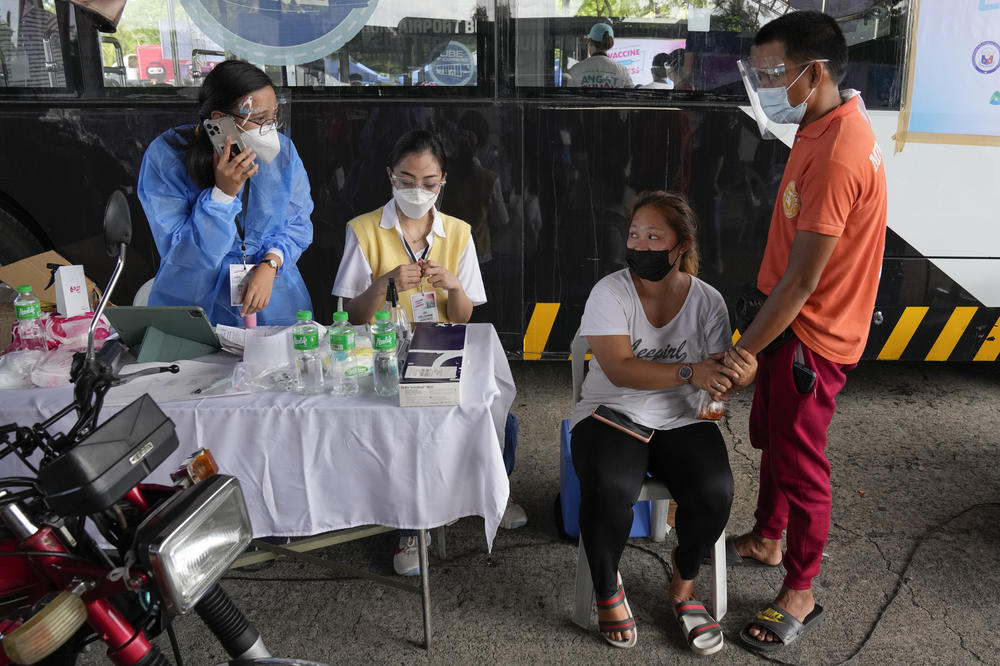 A woman holds the hands of her husband as they wait for a shot of the Sinovac COVID-19 vaccine at a drive-through vaccination center in Manila, Philippines, on June 22. Doubts have spread among Filipinos about the Chinese-made vaccine.

There may have been pressure both from Washington and at home

The pro-American Armed Forces of the Philippines are likely to have influenced Duterte as well. Robert Herrera-Lim, an analyst with the Teneo consulting group in Manila, says the military's "simmering discomfort" with the president's embrace of Beijing has pushed the defense establishment to take a more assertive line against China.

Philippine military leaders blasted Beijing this year for massing a flotilla of Chinese fishing boats near Philippine-claimed reefs, calling it an "incursion."

Since taking office in 2016, Duterte has taken a softer stance on China than past presidents and tried to strengthen ties with the Asian economic giant. But only a fraction of the billions of dollars in Chinese aid and investment he sought for the Philippines has materialized.

Meanwhile, Duterte has pushed for greater distance between the Philippines and the U.S., its treaty ally and onetime colonial power.

In February 2020, the Philippines formally notified the U.S. that it would break off the VFA, but Duterte extended the time frame several times and the deal has remained in effect.

Principally, the VFA sets guidelines for the temporary presence of U.S. service personnel, including rules on procedure and jurisdiction when they are accused of breaking Philippine laws.

The agreement enables the U.S. to send warships and large numbers of troops to engage in combat training, drills and other exercises with the Philippine military.

Uncertainty over whether the U.S. would have to pull out military forces currently operating in the Philippines, including those helping combat Islamist militants in the southern islands, "has been weighing heavily" on the U.S. Defense Department, says Jay Batongbacal, a maritime expert who teaches law at the University of the Philippines.

It could be a political play ahead of the Philippine election 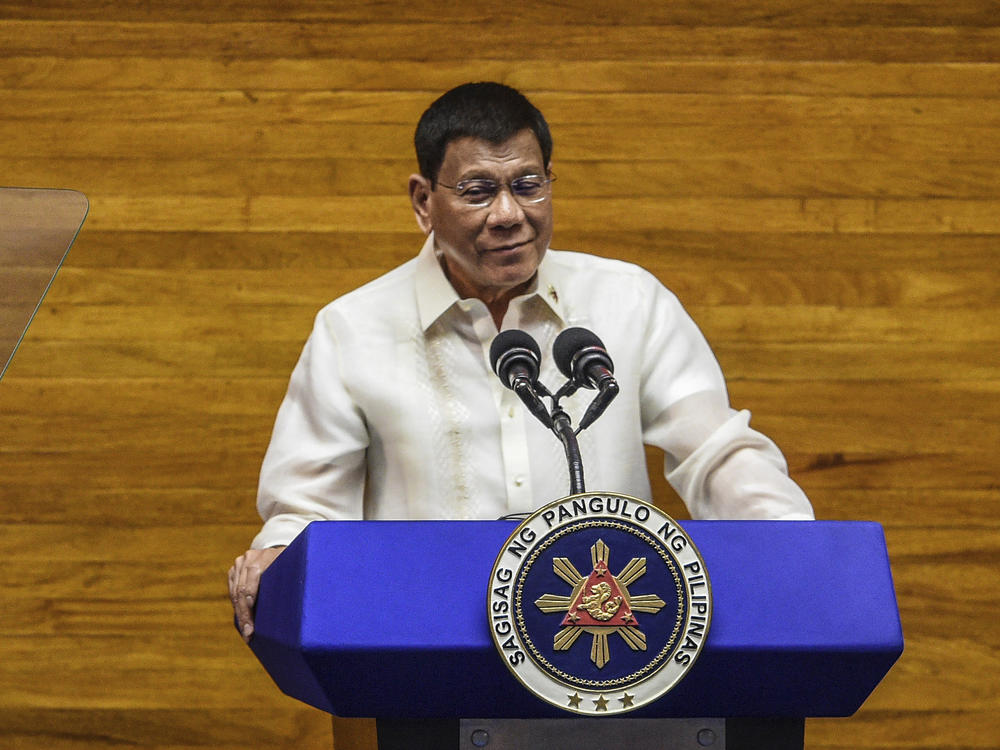 Philippine President Rodrigo Duterte delivers a state of the nation address at the House of Representatives in Quezon City, Philippines, on July 26. Duterte is nearing the end of his six-year term amid a raging pandemic, a battered economy and a legacy overshadowed by a bloody anti-drug crackdown that set off complaints of mass murder before the International Criminal Court.

Analysts say Duterte's decision was less a change of heart and more the calculation of a wily politician — especially ahead of the May 2022 presidential election.

Duterte isn't able to run for reelection, but he has fueled speculation that he might seek the vice presidency alongside his daughter, Sara Duterte, who is considering a bid for the presidency. She currently holds her father's old job as mayor of Davao City on Mindanao island. Manila-based analyst Herrera-Lim says should Duterte's daughter Sara become president, "she will likely adopt a more measured tone closer to the balancing act of other Southeast Asian leaders."

Duterte putting distance between himself and his pro-China policy, which yielded few of the economic gains he promised, could be politically advantageous for his preferred successor.

According to public opinion surveys, Filipinos widely distrust China while they express a significant degree of trust for the United States. And nearly half of adult Filipinos say the government isn't doing enough to assert the country's rights in the South China Sea.

De Castro, the international studies professor, says Duterte's inner circle knows "that an anti-China sentiment can fuel an opposition figure victory, so they are trying to do what they can to dampen that."

But Herrera-Lim says Duterte's foreign policy "biases" are unlikely to have changed. The irascible leader resents many of the rules-based institutions that underpin the liberal international order.

"Should the situation present itself," Herrera-Lim says, "he will continue with his diatribes against the U.S. and EU."

On Monday night, Duterte warned the U.S. State Department to "be careful" about criticizing his government's human rights record because he said, "Your country is ... guilty also of so many violations of human rights." It was an apparent response to a move by nearly a dozen Democratic senators who urged Secretary of State Antony Blinken to condemn alleged human rights abuses committed in the Philippines, including those related to the country's bloody war on illegal drugs.

This is not a reset — yet 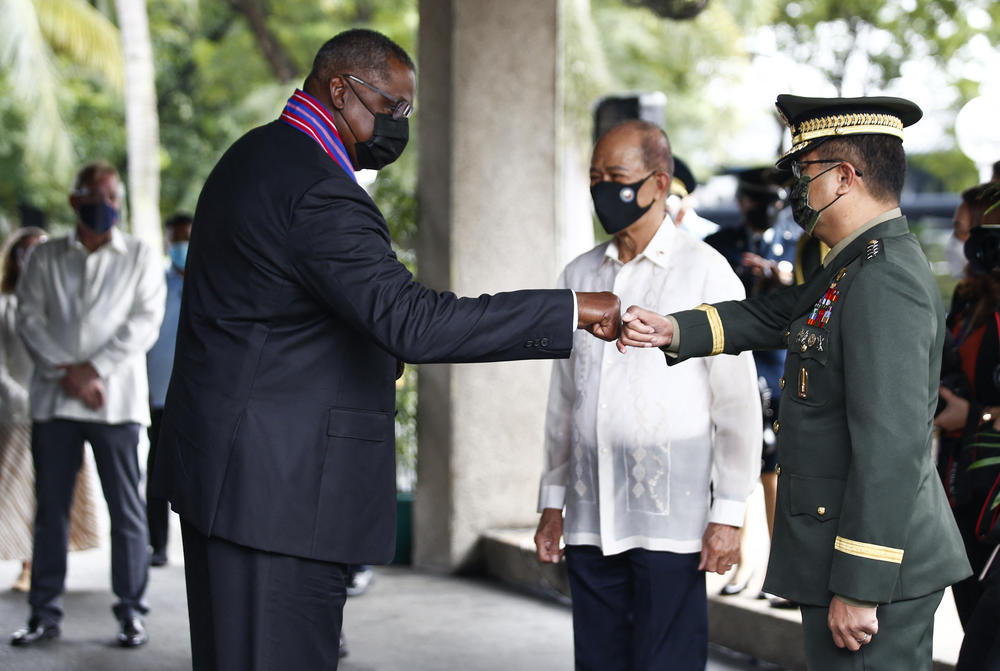 Touring the region last week, Austin, the U.S. defense secretary, said, "We are not asking countries in the region to choose between the United States and China."

Austin said he is seeking to "reinvigorate" the U.S.-Philippine alliance, which marks 70 years of the Mutual Defense Treaty this year, and to help "modernize" the Armed Forces of the Philippines.

In June, the State Department approved plans to sell the Philippines $2.6 billion worth of fighter jets, missiles and related equipment.

Vice President Harris' Southeast Asia visit later this month caps a succession of high-ranking officials who have traveled to the region to make the case "in neon lights" that the U.S. is back in the region, says Murray Hiebert, an expert on Southeast Asia at the Center for Strategic and International Studies. The administration is hoping to rebuild trust that declined under former President Donald Trump's "America first" policy.

While the Biden administration has declared human rights the centerpiece of its foreign policy, it has carefully avoided publicly calling out the Philippines over its controversial drug war and other alleged abuses.

De Castro says the Americans need Duterte on their side because of the rising dangers posed in the South China Sea. "Why rock the boat? It's only a matter of 10 months" before Duterte leaves office, he says.

Any genuine reset of U.S.-Philippine relations, de Castro says, "will have to wait until President Duterte is no longer president." 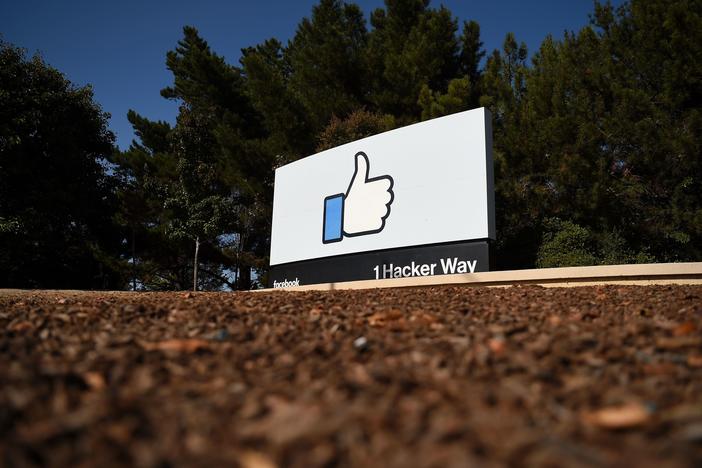 Most of the operation's activity focused on Chinese interests in the South China Sea but also included some content about U.S. politics. 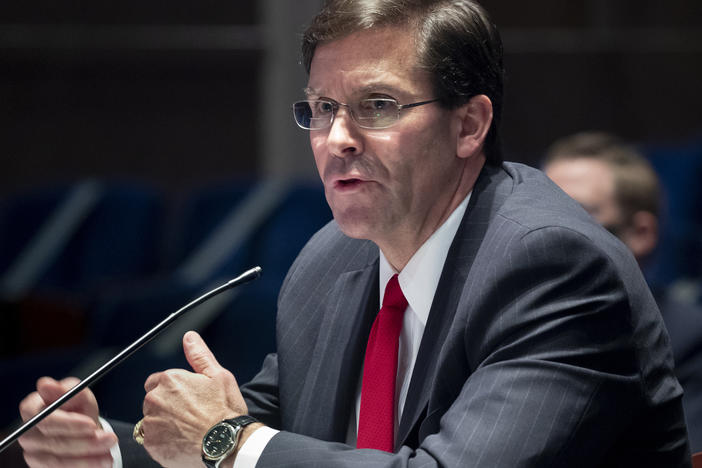 Defense Secretary Mark Esper and his Chinese counterpart lectured one another in a 90-minute call as the highest level U.S. delegation in four decades plans a provocative visit to Taiwan. 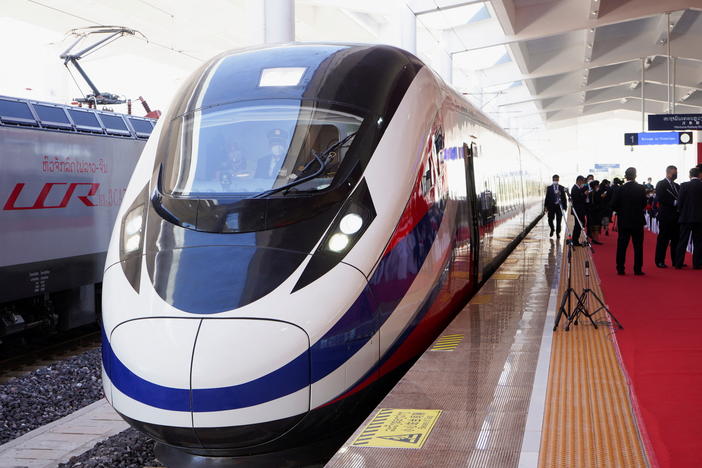 The Biden administration hopes to make deeper inroads in Southeast Asia but lags far behind China, which has already built up major trade ties, as well as roads and a high-speed rail.