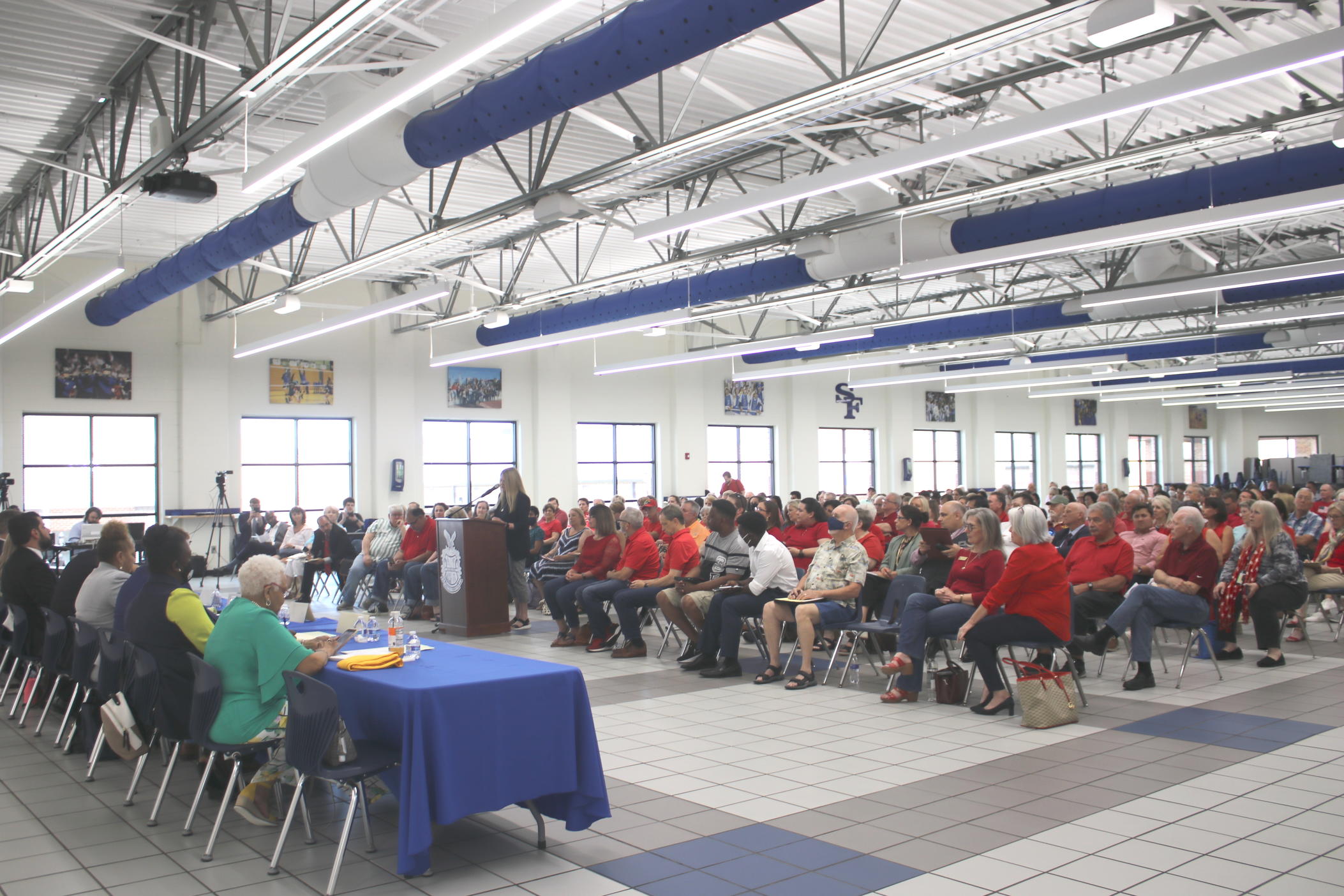 Emerging themes at the public hearings include keeping together communities that share common interests, greater openness and transparency in the process and ensuring that maps are drawn fairly, not for partisan advantage.

At a recent hearing of the joint state House and Senate redistricting committees in Dalton, residents in the North Georgia town of 33,000 repeatedly called on lawmakers to avoid splitting the region’s growing Latino communities when drawing new district lines.

“We ask you to please consider Latinos in the area as a community of interest in order for us to have proportional, fair representation since we share common concerns,” said America Gruner, who said she has lived in Dalton for nearly two decades since coming to the United States from Mexico.

The Latino community in Dalton has grown significantly over the years, drawn largely by the jobs in the area’s extensive carpet industry. Latinos are now the largest ethnic group in the city, making up more than 46% of the population in 2019, according to U.S. Census figures.

Gruner and others at the Dalton meeting said they worry the Latino vote would be diluted if their communities are split by district lines.

They also called on the committees to make the process more accessible by providing information in languages other than English. Those and similar appeals at other public hearings hosted by the committee have so far gone unaddressed.

Others at the Dalton hearing expressed satisfaction with the area’s current district boundaries and its representation by controversial U.S. Rep. Marjorie Taylor Greene. Area resident Bill Buoni called on the redistricting committees to group like-minded residents together.

“I want to really encourage you to be thoughtful and mindful in how we go about this process,” Buoni said. “I think it is important when we have people with shared values to keep those values together.”

Some speakers from outside Greene’s district asked that their communities be added to it.

Keeping communities together has been a recurring topic at other public meetings as well.

Thirty years ago, Forsyth County was nearly entirely white. It is still majority white, and split between two congressional districts, which also take in more diverse communities in neighboring counties.

Forsyth is represented by Republican Andrew Clyde in the 9th District and Democrat Carolyn Bourdeaux in the 7th. Bourdeaux’s election in 2020 flipped the longtime GOP stronghold from red to blue.

“Here in Forsyth County, we’re a great community,” Murray said. “We like living with each other, we’re pretty friendly, we have good schools, good representation. And we would like to make our county whole as a district.”

At the meeting in Athens, speakers also called for a realignment of their legislative districts. 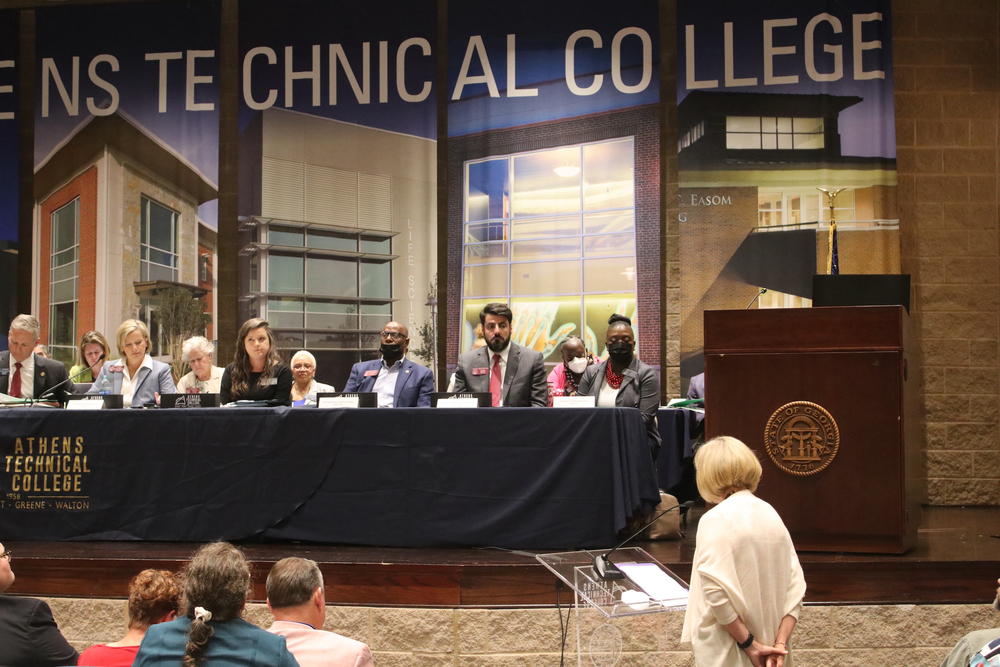 Athens resident Vicki Krugman speaks to members of the redistricting committees during a redistricting town hall meeting at Athens Technical College on July 6, 2021.

Although Athens-Clarke County consistently votes for Democrats, because of the way the districts are drawn, two of its three state House representatives and both its state senators are Republicans.

The University of Georgia campus is also split across three House seats.

Logan Williamson, who studies political science at UGA, called for more accurate representation of voter preferences and the “unity of UGA’s campus” in state House districts. He said because Athens is grouped with more rural regions with different interests, residents are unable to advocate for their specific interests.

“I’ve walked through all three districts just moving between classes,” Williamson said. “As UGA students, we will move into the future to majorly impact, change and improve industry and [the] economy both in Georgia and nationally. But we are fractured in electing our representatives.”

To gain political advantage, legislators can split up cities into two or more districts. The practice, known as “cracking,” dilutes the voting power of one group in favor of another. Michael McDonald, a political science professor at the University of Florida who studies voting and redistricting, says cracking of cities is a “typical strategy for partisan gerrymandering.”

“When you combine one city, you often can get a Democratic district,” McDonald said.

“If you want to dilute the vote of those people, those Democrats living in those cities, what you do is that cracking strategy.”

Speakers at the public meetings have consistently called on lawmakers to ensure the redistricting process is transparent and fair.

The redistricting committee chairs, state Sen. John Kennedy (R-Macon) and state Rep. Bonnie Rich (R-Suwanee), have said the purpose of the session is to get public input.

“Usually when politicians hold hearings, it's because they like to talk, but that is not our purpose tonight,” Rich said at the first hearing June 15, which was online. “Our purpose is to hear from you, Georgians, the members of our public, our constituents.”

Formal committee meetings, during which new maps will be adopted, are expected to take place this fall after Census data is released.

At the June 15 session, Rep. Mack Jackson (D-Sandersville), a member of the committee, asked if there would be additional public meetings once Census numbers are available. The committee chairs were non-committal.

“We don’t know yet because we haven’t gotten the data yet, and there’s not necessarily a firm deadline,” Rich said.

Another member of the committee, State Senate Minority Leader Gloria Butler (D-Stone Mountain), testified in both Atlanta and Athens. She said a fair and transparent process requires public input at all stages, including after maps are drawn.

“Georgians are entitled to not only examine the criteria used to create their own district, but also provide substantive feedback on any proposed maps before they are adopted,” Butler said in Athens. “Democracy cannot happen behind closed doors. Our redistricting process must be open, democratic and representative of the interests of all Georgians.”

Throughout the hearings, speakers called on committee members not to use redistricting for political advantage.

“Redistricting shouldn’t be as partisan as it is,” said Katy Gates, a recent graduate of South Forsyth High School. “It’s important to make sure that everyone is feeling accurately represented in their government because that’s what democracy is all about.”

HOW TO GET INVOLVED

The joint committee has scheduled additional public sessions later this month in Brunswick, Albany, Columbus and Macon. These in-person meetings will be streamed live and archived here. The committee will also hold a virtual public meeting Friday, July 30 at 5 p.m. 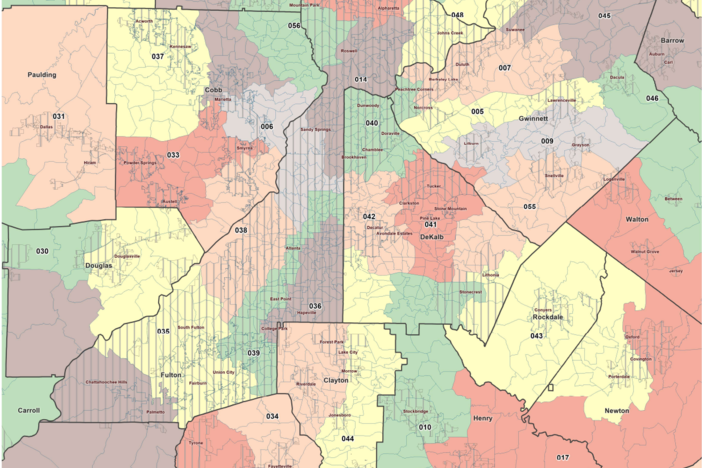 The proposals give up some seats in the majority to Democrats in the fast-growing metro Atlanta area. 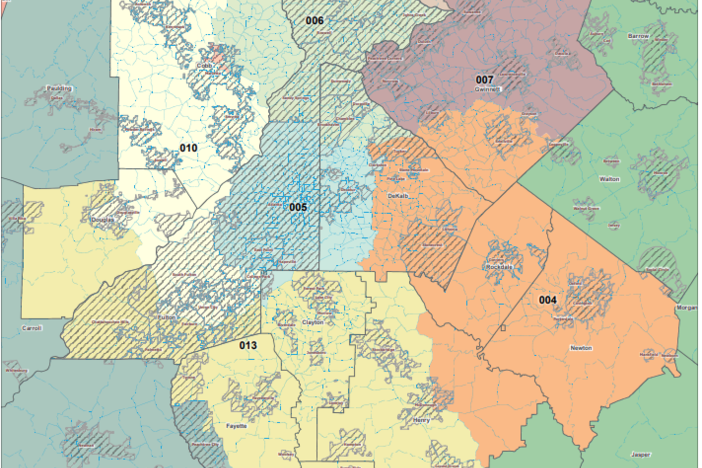 The proposed map would create a new Democratic district in Cobb County by removing a Republican district in eastern Georgia.