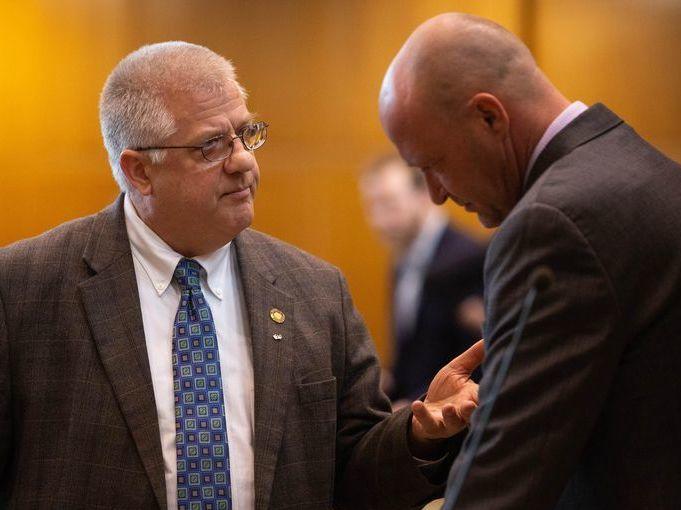 Rep. Mike Nearman, R-Polk County, chats with fellow representatives on the House floor on April 11, 2019, at the Capitol in Salem, Ore. He faces criminal charges after allowing far-right demonstrators to breach the state Capitol in December 2020.

According to court records, Nearman has been charged with first-degree official misconduct, a class A misdemeanor, and second degree criminal trespass, a class C misdemeanor.

The decision to charge Nearman follows a monthslong investigation by state police that began Dec. 21. As lawmakers met in a special legislative session to take up COVID-19 relief that day, surveillance footage showed Nearman exiting the locked Capitol building into a throng of protesters who were trying to get inside the statehouse. In doing so, he appeared to purposefully grant entrance to far right groups demanding an end to ongoing restrictions related to COVID-19.

Shortly after that breach, demonstrators scuffled with state troopers and Salem police. One man is accused of spraying officers with bear mace, allowing the crowd to make their way further into the building. Several people were arrested before the Capitol was cleared, and members of the crowd went on to shatter glass doors and assault journalists outside the building. Nearman, meanwhile, promptly walked around the building and entered on the opposite side.

At least three people who participated in the Salem protest went on to participate in the attack on the U.S. Capitol in Washington, D.C.

Nearman did not immediately respond to a request for comment Friday.

Under the official misconduct charge, prosecutors stated that on Dec. 21, Nearman "being a public servant, did unlawfully and knowingly perform an act which constituted an unauthorize exercise of his official duties with intent to obtain a benefit or to harm another."

Prosecutors also stated under the trespassing charge that Nearman, "constituting part of a common scheme or plan," unlawfully aided and abetted "another to unlawfully and knowingly enter and remain in and upon the premises of the Oregon State Capitol."

Nearman is required to appear in Marion County Court at 9 a.m. May 11, according to court documents. Failure to appear, documents state, will result in a warrant for his arrest.

The charges announced Friday are just one facet of the repercussions Nearman faces from the incident.

"He let a group of rioters enter the Capitol, despite his knowledge that only authorized personnel are allowed in the building due to the COVID-19 pandemic," the complaint said, calling Nearman's actions "completely unacceptable, reckless, and so severe that it will affect people's ability to feel safe working in the Capitol or even for the legislature."

The complaint requires an investigation into whether Nearman's actions broke workplace rules, a determination that would ultimately be made by a House committee evenly split between Democrats and Republicans. Nearman could face consequences ranging from counseling to expulsion if lawmakers conclude he violated legislative policy.

It's not clear when the matter could come before the Oregon House Conduct Committee for a hearing.

While that process plays out, Nearman has seen his ability to impact bills during the Legislative session severely diminished. He's been removed from all of his former legislative committees, and agreed to turn in his Capitol access badge and provide 24-hours notice before coming to the building. Nearman has still regularly appeared at House floor sessions.

The lawmaker also faces a rather large bill. In early March, the Legislative Assembly invoiced Nearman more than $2,700 for repairs following the December incursion. But the body has limited options for forcing Nearman to pay the tab. He had not responded to the invoice as of Thursday, interim legislative administrator Brett Hanes said.

Nearman has not said much about his role in the breach, but in a statement in January he emphasized his belief that the Capitol should be open to the general public, a position many of his Republican colleagues agree with. The building has been closed since March 2020, leading lawmakers to hold hearings and take testimony virtually during three subsequent special sessions and this year's regular legislative session.

"I don't condone violence nor participate in it," Nearman's statement said. "I do think that when Article IV, Section 14 of the Oregon Constitution says that the legislative proceedings shall be 'open,' it means open, and as anyone who has spent the last nine months staring at a screen doing virtual meetings will tell you, it's not the same thing as being open." 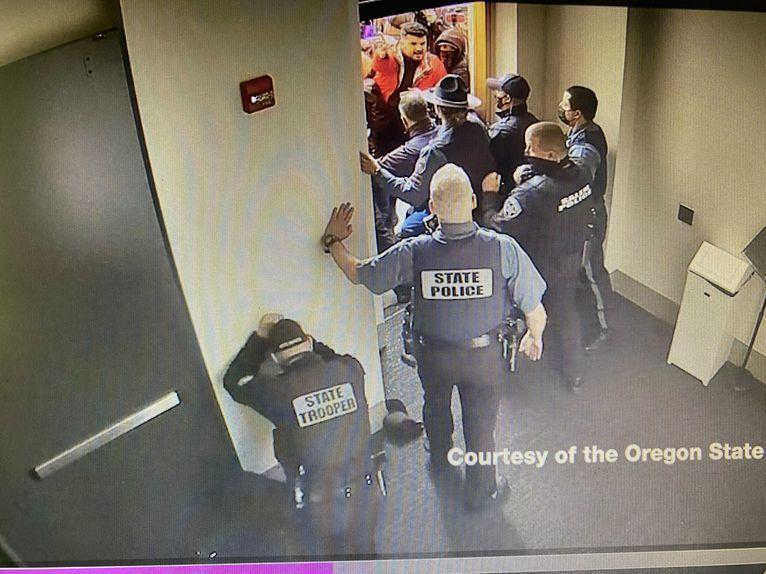 Nearman suggested in the statement he was the victim of a political attack, and that he was being subjected to "mob justice."

"Rep. Nearman put every person in the Capitol in serious danger and created fear among Capitol staff and legislators," Kotek said in a statement to OPB. "I called on him to resign in January and renew my call in light of today's charges."

While Democrats and left-leaning groups have railed against Nearman, his Republican colleagues have had little to say about his actions. In one of her only statements on the matter, House Republican Leader Christine Drazan of Canby said in January she'd support the result of a criminal investigation.

"If the investigation finds that actions taken were criminal, legislators are not above the law and will be held responsible," Drazan's statement said. "As we affirm the need for due process and the right of the public to fully engage in the work of the legislature, we commit to protect public safety and hold accountable to those who would willfully undermine that commitment."

Drazan was not immediately available Friday to answer questions about whether Nearman's role among House Republicans would change in light of the charges, a spokesman said.

One of the most conservative Republicans in the House, Nearman has been a lawmaker since 2015. In that time, he's been tied repeatedly to right-wing demonstrations. In 2017, his then-legislative aide gave a gun to a convicted felon, who then brought it to a pro-Trump demonstration at the Capitol, the Oregonian/OregonLive reported. Court records show the aide, Angela Roman, pleaded guilty to a misdemeanor in the incident.

Nearman's dedication to right-wing causes has not flagged, despite his recent controversy. On Saturday, he's slated to appear at a Salem rally in support of gun rights alongside former congressional candidate and QAnon conspiracy theory supporter Jo Rae Perkins, according to a flyer for the event. 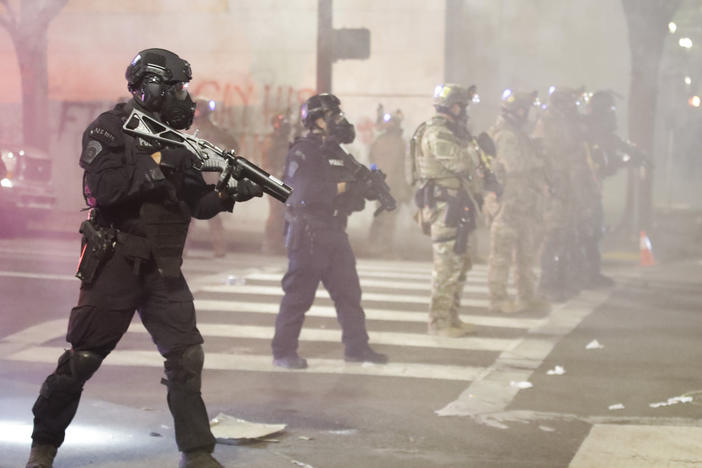 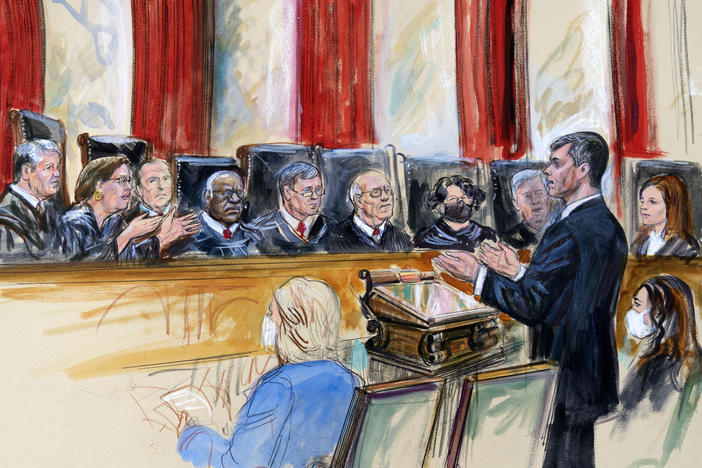 Roe v. Wade's future is in doubt after historic arguments at Supreme Court

The fate of abortion in the U.S. appears to be on shaky ground as a divided Supreme Court weighs a Mississippi law. A decision in the case is expected by summer. 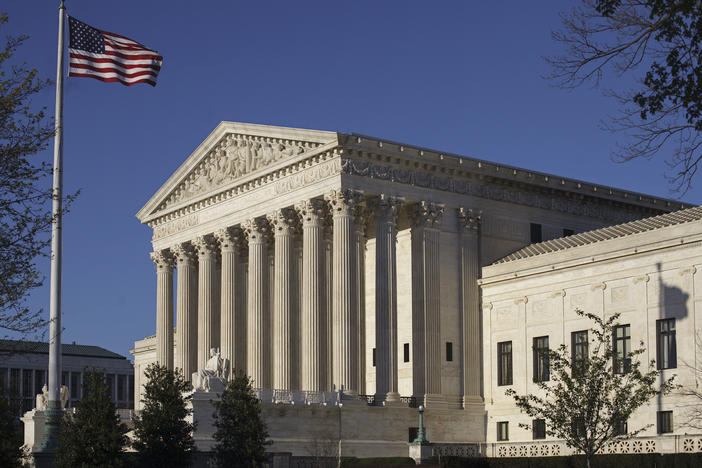 At issue is whether to reverse the court's nearly half-century-old decision, Roe v. Wade, and subsequent decisions declaring that women have a constitutional right to terminate a pregnancy.