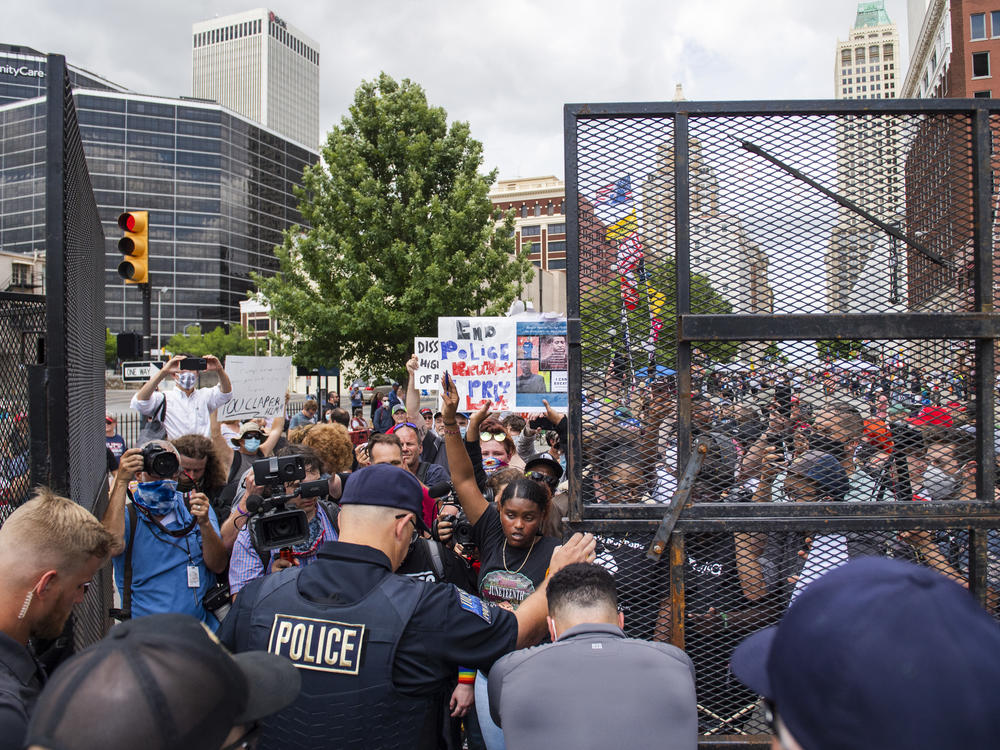 Protesters gather outside the entrance to a rally for then-President Donald Trump in June in Tulsa, Okla. A new state law increases penalties for protesters who block public roadways and grants legal immunity to drivers who unintentionally harm them as they try to flee. / The Washington Post via Getty Images

A new law in Oklahoma increases penalties for demonstrators who block public roadways and grants immunity to motorists who unintentionally kill or injure protesters while attempting to flee. Critics of the bill say it is intended to limit demonstrations and puts the people involved in them at risk.

Gov. Kevin Stitt signed the legislation on Wednesday, making Oklahoma the latest Republican-led state to crack down on protests in the wake of last summer's nationwide demonstrations against racism and police violence.

"This is an important protection for citizens who are just trying to get out of a bad situation," state Rep. Kevin West, a sponsor of the bill, said in a statement. "When fleeing an unlawful riot, they should not face threat of prosecution for trying to protect themselves, their families or their property."

Under the new law, obstructing the use of a public street or highway during a protest is considered a misdemeanor punishable by up to a year in county jail and/or a fine ranging from $100 to $5,000.

Another provision grants civil and criminal liability protection to motorists who unintentionally cause injury or death while "fleeing from a riot."

State Sen. Rob Standridge, also a sponsor of the bill, said in a video recording that it sets a high bar. The harm must be unintentional, he stressed, and the vehicle occupants must feel like they are in imminent danger, "like people are trying to break open the windows or trying to drag somebody out of the vehicle."

"In those instances, and we've seen them, even here in Oklahoma, it does protect them," Standridge said. "Hopefully everything quiets down around the country, and this bill won't be needed for anybody, but if things come to Oklahoma like have been happening, this will protect some folks."

The bill passed the state House and Senate largely along party lines, with no House Democrats voting in favor, and it will take effect on Nov. 1.

It was introduced in response to a widely publicized incident in Tulsa last May when a pickup truck drove through a crowd that had gathered on an interstate to protest the police killing of George Floyd.

The truck, which was pulling a horse trailer, hit and injured three people, including a 33-year-old man who was left paralyzed from the waist down after falling from an overpass.

The Tulsa County District Attorney's Office announced in July it would not press charges against the driver, writing in a memo that he, his wife and two children were all "in a state of immediate fear for their safety" and had been the victims of a "violent and unprovoked attack by multiple individuals who unnecessarily escalated an already dangerous circumstance by obstructing an interstate highway."

"The prosecutor declined to file charges, but that may not always be the case," Standridge said. "This bill will protect innocent people trapped by a rioting mob."

While similar incidents played out across the country last summer, data shows that the vast majority of protests associated with the Black Lives Matter movement have been peaceful. A report by the Armed Conflict Location & Event Data Project found that demonstrators did not engage in violence or destructive activity in more than 93% of such gatherings in the period between May and late August.

Critics of the law say it stifles protesters' First Amendment rights and worry it will disproportionately harm people of color, who are generally at the forefront of demonstrations calling for an end to racism in policing.

"In this state, it is oftentimes the marginalized voices that aren't oftentimes heard, and these are why they do the protests that they've done, this is why they speak on the things that they speak on," Joshua Harris-Till, president of Young Democrats of America and an Oklahoman, said in March, as Public Radio Tulsa reported. He called the bill "the worst anti-protest bill in the nation" in a tweet this month.

Some 35 demonstrators marched through the state Capitol on Wednesday to protest several pieces of advancing legislation they described as "anti-protest bills," The Oklahoman reported.

Stitt also signed HB 1643, which makes it a crime to doxx police officers, or post anything online that could include personally identifying information with the intent to threaten, stalk or harass them.

The American Civil Liberties Union of Oklahoma issued a statement when both bills passed the state Senate, describing lawmakers as "trampling the rights and liberties of Oklahomans in favor of those with the most power and access, themselves included."

Advocates denounced the legislation as an effort to silence constituents' voices and criminalize their calls for racial justice.

"In a body that prides itself on prioritizing freedom, a majority of members of the Oklahoma Senate advanced key legislation today in an anti-freedom agenda unrivaled by any other state legislature in its unabashed attempts to center power, order, and white supremacy over the rights, liberties, and lives of Oklahomans, especially Black and Indigenous Oklahomans," said Nicole McAfee, director of policy and advocacy for the ACLU of Oklahoma.

Several other states experienced high-profile clashes between protesters and motorists during last summer's nationwide reckoning over racial justice, during which blocking traffic was a commonly used tactic.

In Minneapolis, for example, a tanker truck barreled through protesters marching on an interstate in June, though it left no serious injuries. Other incidents were deadlier: One person was killed and another injured when a man drove his car through protests on a Seattle freeway, and a man in St. Louis was fatally struck by a FedEx truck during demonstrations in May.

Oklahoma is also not alone in advancing measures that critics say will stifle protests.

The International Center for Not-for-Profit Law, which tracks state and federal initiatives limiting the right to protest, said there are more than 60 such measures currently pending across the country.

Arkansas and Kansas recently passed laws strengthening penalties for protesters around gas and oil pipelines. And earlier this week, Florida's governor signed a law he called the "strongest anti-rioting, pro-law enforcement measure in the country." 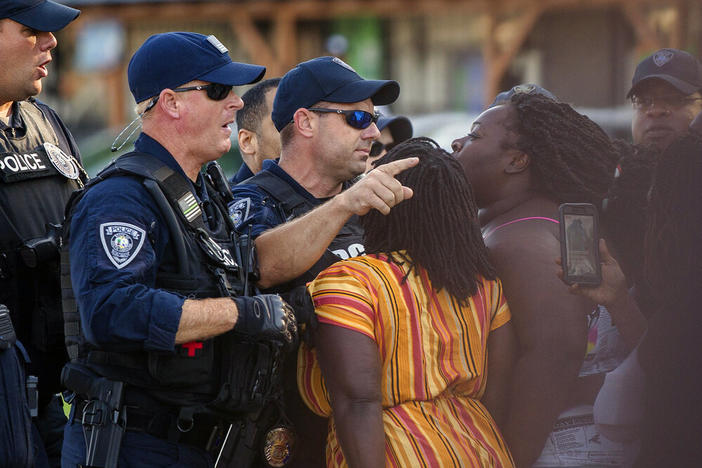 A Black protester voiced anger at police in South Carolina. She got 4 years in prison

Brittany Martin, 34, was convicted of breaching the peace in a high and aggravated manner, and may have to give birth in prison. An advocate notes that some Jan. 6 rioters are serving far less time. 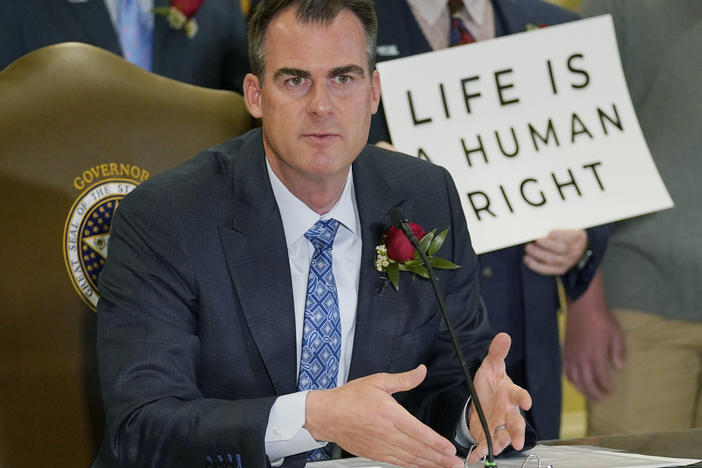 Oklahoma now becomes the first state in the nation to effectively end availability of the procedure. 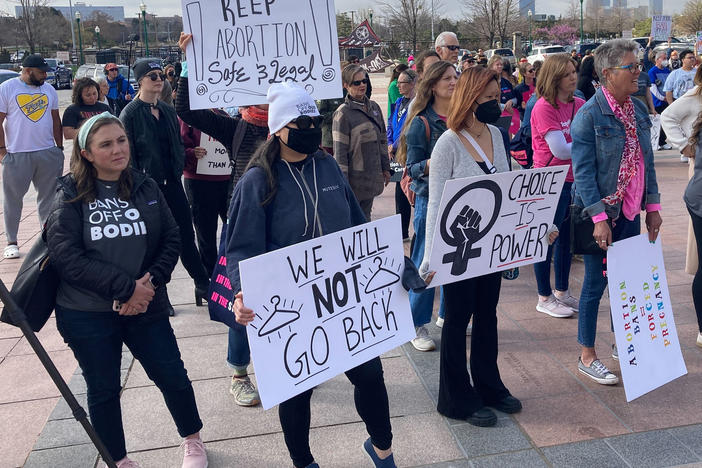 With little discussion, Oklahoma passes a bill to make most abortions illegal

The state's Republican-controlled House gives final legislative approval to a bill that would make performing an abortion a felony, punishable by up to 10 years in prison.