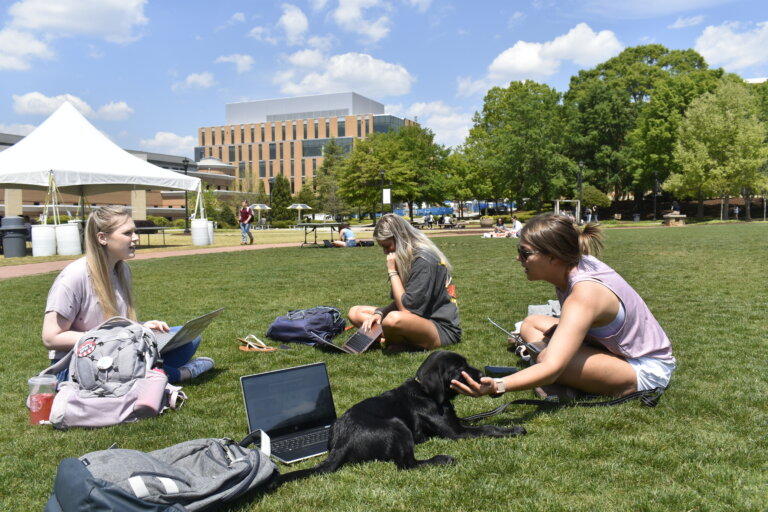 A group of Kennesaw State University students and their puppy do some classwork on the campus green this week.

After a stressful year of video conferences and hybrid coursework, University of North Georgia associate professor of rhetoric and composition Matthew Boedy is beginning to think about what he’ll say when he greets his students in the classroom this fall.

“What I’m looking forward to most is the individual student conferences,” said Boedy, who is also conference president of the Georgia chapter of the American Association of University Professors. “Some people have had video access problems, some didn’t want to use the actual video, they just wanted to do audio, but we will go back to those happening in my office, and I’ll have students on the other side of my desk to talk about their writing, and I think that’s the thing that will be, when we do that, that we’ll know we’re quote-unquote ‘back to normal.’”

A return to normal is exactly what the University System of Georgia has promised students and faculty, tying the decision to the wider availability of vaccines.

Though Boedy says he’s looking forward to a normal semester, he has concerns, including about whether enough students and employees will get the vaccine to help create herd immunity.

“I’m hoping for a mandate, that is, anybody who works or goes to school on my campus at my school be vaccinated, outside of any type of religious or other exemptions that are already written for the other vaccines they have to get mandated for,” he said.

Some of Atlanta’s largest private colleges, including Emory, Morehouse, Spelman and Clark Atlanta, announced this week that they will require students get vaccinated before returning to campus this coming semester.

Emory will require students to receive the shots, with exceptions for those with medical conditions or strong personal objections. The Atlanta University Center Consortium, whose members include Clark Atlanta, Spelman and Morehouse, plans to require vaccinations for both students and staff and is developing a process to consider exemptions, according to a statement.

Given more than a day to respond to emails, the University System of Georgia, which represents Georgia’s public colleges, declined to reveal its position on mandatory vaccines for this story.

Gov. Brian Kemp has signaled he would oppose any state agency that tries to impose a vaccine passport, a broad term being used to describe documentation of an individual’s COVID-19 immunization status.

“I do not and will not support any kind of state-mandated vaccine passport. While the development of multiple safe, highly effective COVID-19 vaccines has been a scientific miracle, the decision to receive the vaccine should be left up to each individual,” Kemp said in a tweet, adding that he received the vaccine and he encourages all Georgians to make an appointment.

Students at Kennesaw State University had mixed opinions on the matter. 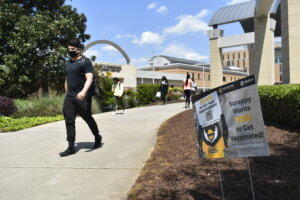 Junior business management major Johnny Saale said he wouldn’t have a problem if he had to get the shot before coming back to campus next semester.

“We’re kind of in an environment where you’re easily susceptible to get the COVID-19 virus, so I feel like, if that’s what they need to do to keep others safe, I’m OK with that,” he said. “I haven’t gotten my vaccine yet, but I’m willing to comply, you know, to keep me safe and to keep everyone around me safe."

Sophomore Logan Disher, who is majoring in history education, said he would consider transferring schools if the vaccine were a requirement. 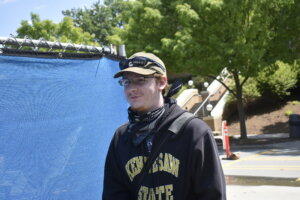 The debate over college vaccine requirements is heating up across the country, including Georgia’s neighboring states.

The University of Tennessee announced this month it will not require vaccines for students or staff this fall, a reversal of an emergency rule passed over the summer.

Florida’s Nova Southeastern University joined a small group of U.S. colleges on April 1, when the private research university announced that it would require all students, faculty and staff to be vaccinated against COVID-19 before returning to campus this fall.

But the next day, Gov. Ron DeSantis scrambled those plans, issuing an executive order barring any state or local government agency from issuing, or any private business from requiring, a “vaccine passport.”

The order left NSU in limbo over whether it can proceed with plans to require vaccinations. The south Florida school isn’t alone in its uncertainty over how to balance politics and public health concerns as colleges and universities that have already weathered a difficult year look ahead to the fall semester.

More than 50 colleges across the country have announced plans to require a COVID-19 shot for the fall semester, according to a tally by the Chronicle of Higher Education. That list includes large universities like Rutgers and Cornell, as well as smaller schools like Iowa’s Grinnell College, in states with both Democratic and Republican governors.

Other colleges so far have sought to encourage, rather than mandate, that students receive a vaccine, with varying degrees of success.

Universities have hosted vaccination clinics on their campuses, but also have struggled to find doses. Many are racing to vaccinate students — most in age groups that only recently became eligible — before the spring semester ends.

There’s legal precedent suggesting that colleges — which already require students to receive other common vaccinations — are within their bounds to require a COVID-19 shot, allowing for limited exemptions. But there are also a number of reasons that schools might not require the new vaccine, including hesitancy among certain groups and questions about availability for international students.

At Nova Southeastern, college officials hadn’t yet detailed how exactly the requirement would work when DeSantis issued his executive order, and school officials said they are reviewing it.

“Our priority has always been to save lives, to prevent the spread of COVID-19, to deliver the best educational experience, and to protect our students and employees to the best of our ability,” Hanbury said in an April 8 statement.

The possibility that Americans will be required to prove they’ve received a COVID-19 vaccine in order to return to their office, school, or entertainment venues has sparked a politically polarizing response, similar to the way mask requirements sparked division early in the pandemic.

Conservatives in Washington, D.C. and state capitals have seized on the idea of vaccination passports, blasting them as violating health privacy.

Several governors, including DeSantis and Iowa Gov. Kim Reynolds, either have banned vaccine passports or vowed to support bills doing so. (DeSantis’ office did not respond to questions about whether his ban was intended to prohibit colleges from vaccination requirements.)

Meanwhile, Democratic-run New York has forged ahead with a free digital app to prove you’ve been vaccinated or recently received a negative coronavirus test result. Designed by IBM, New York’s Excelsior Pass gives a special code that businesses can scan, allowing people to leave their paper vaccination cards at home.

A Georgia House bill  barring vaccine passports did not make it to the Senate during the 2021 legislative session.

Democratic officials in Hawaii, a state that relies heavily on tourists and business owners feeling safe about in-person dining and entertainment, also have said they’re considering a passport system.

President Joe Biden’s administration has largely sidestepped the issue, saying they believe it’s not the government’s role to create a centralized database on which Americans have and have not been vaccinated.

Federal officials have deferred to the range of private-sector companies that are attempting to build vaccination apps, advising only that the apps must ensure data is kept secure and that there are non-digital options available so no one is excluded from traveling or entering businesses.

That’s offered little support for colleges weighing a requirement, or clarity on the type of exemptions that they might need to allow. 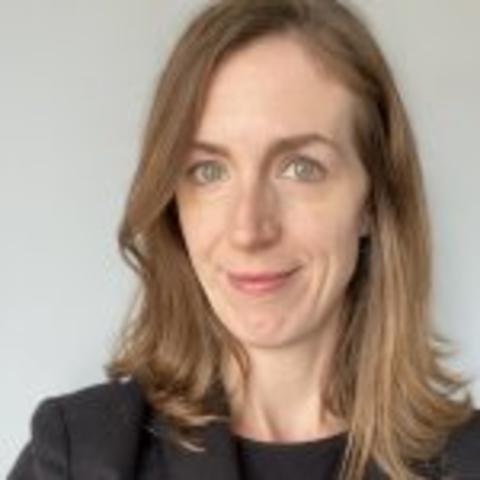