Neither #OscarsSoWhite Nor #OscarsSoMale — What A Difference A Pandemic Makes

It's been a catastrophic 12 months for movie theaters. It has also been a banner year for diversity at the Oscars — but it's going to take some work to make it permanent.

This pandemic year, the most catastrophic 12 months in the history of movie theaters, has also been a banner year for diversity at the Oscars. Critic Bob Mondello thinks those two things might be related.

BOB MONDELLO, BYLINE: The one thing you don't want if you're in charge of the Oscars is a hashtag, especially something like #oscarssowhite, as host Chris Rock acknowledged in his opening monologue the year that one went viral.

CHRIS ROCK: It's the 88th Academy Awards, which means this whole no-Black-nominees thing has happened at least 71 other times.

MONDELLO: That was 2016, and things didn't change much at first. Last year's Oscars were again among the least diverse in recent memory. Only 1 of 20 acting nominees was non-white. This year, by comparison, nine are, almost half the nominees. Then there was the hashtag #oscarssomale, which Frances McDormand riffed on in her best actress acceptance speech in 2018.

FRANCES MCDORMAND: If I may be so honored to have all the female nominees in every category stand with me in this room tonight - the actors. Meryl, if you do it, everybody else will. Come on - the filmmakers, the producers, the directors...

MONDELLO: Dozens of women stood, but again, it didn't initially have much effect. Last year, just as in 86 of the 91 previous years, not a single woman director was nominated, even though McDormand had closed out this speech urging her colleagues to insist on women behind the camera by adding a clause to their contracts.

MCDORMAND: I have two words to leave with you tonight, ladies and gentlemen - inclusion rider.

MONDELLO: McDormand took her own advice. And this year, what a difference a pandemic makes. She produced as well as starred in "Nomadland"...

MONDELLO: ...A film based on a book by a woman featuring the stories of quite a few women and scripted, edited and directed by Chloe Zhao, who for the first time in Hollywood history is a woman competing with a second woman in the directing category. As for the unprecedented number of actors of color among the nominees, it represents a remarkable moment of recognition, vibrant performances in the true stories of celebrated African American figures from Black Panther Fred Hampton in "Judas And The Black Messiah"...

DANIEL KALUUYA: (As Fred Hampton) I am...

UNIDENTIFIED ACTORS: (As characters) I am...

KALUUYA: (As Fred Hampton) ...A revolutionary.

MONDELLO: ...To blues legend Lady Day in "The United States Vs. Billie Holiday"...

(SOUNDBITE OF FILM, "THE UNITED STATES VS. BILLIE HOLIDAY")

ANDRA DAY: (As Billie Holiday) I think we should integrate the audience for this show, Blacks and whites sitting together.

MONDELLO: ...To Malcolm X, Jim Brown and Sam Cooke celebrating with a pal in "One Night In Miami."

(SOUNDBITE OF FILM, "ONE NIGHT IN MIAMI")

MATT JONES: (As Classius Clay) I'm the new heavyweight champion of the world, and I don't even have a scratch on my face. Oh, my goodness.

JONES: (As Cassius Clay) Why am I so pretty?

VIOLA DAVIS: (As Ma Rainey) They want to call me Mother Blues. That's all right with me.

MONDELLO: ...And the story of Korean immigrants in "Minari"...

MONDELLO: ...Eye opening everyone and, taken together, a clear sign that this is a year of inclusion for the academy, but not necessarily because Tinseltown has awakened to the virtues of diversity. These are the films that studios decided to open in the middle of a pandemic, a decision that they knew would have financial consequences. Films usually get an Oscar bounce from being nominated, a bump in ticket sales that in a normal year can amount to many millions of dollars and give a film far more reach. Last year's Best Picture is a case in point.

JANE FONDA: And the Oscar goes to "Parasite."

MONDELLO: The film was playing in 300 theaters before it was nominated. Following the award...

UNIDENTIFIED PERSON: "Parasite" is the first film not in the English language to win best picture.

MONDELLO: ...Its run in the U.S. expanded to five times as many theaters. But this year, with cinemas mostly closed and audiences skittish about crowds, that box office bounce doesn't exist. If you take all eight of the current Best Picture nominees and combine their earnings, the total comes to barely $35 million worldwide. That would be an unimpressive number for one nominee in a normal year. So to compete for an Oscar this year, a filmmaker had to make an almost Faustian bargain - come out mid-pandemic for awards consideration and lose your shirt or sell your soul for a box office after the pandemic and lose your shot. Many of the films regarded as Oscar shoo-ins decided to wait.

MONDELLO: A new version of the musical "West Side Story," for instance, with a script by Pulitzer winner Tony Kushner, directed by Oscar winner Steven Spielberg.

(SOUNDBITE OF FILM, "THE FRENCH DISPATCH")

BILL MURRAY: (As Arthur Howitzer Jr.) You don't think it's almost too seedy this time?

MCDORMAND: (As Lucinda Krementz) I can see that.

MONDELLO: These films were all shot, edited and ready to go in time for Oscar consideration, but their studios opted to wait. From a financial perspective, it's easy to see why. Until a couple of weeks ago, New York and Los Angeles, the two markets that make or break prestige pictures, were still not allowing theaters to open. Almost as bad, the theaters elsewhere that were open were reducing attendance to as little as 25% of capacity. That scared off even the commercial crowd.

MONDELLO: He wasn't at the multiplex, nor were Marvel superheroes or the "Fast & Furious" crew. If they weren't willing to brave the crippling pandemic economics at cinemas, why should Oscar hopefuls? So when filmmakers had the clout to say, let's wait, they did. And who had that clout? The same mostly male, mostly white stars, producers and studio heads who've always had it. Who apparently didn't have that clout? Well, start with the women who made "Nomadland" and "Promising Young Woman" or the Korean American director of the low-budget indie "Minari," or even the well-connected folks behind "Judas And The Black Messiah"...

LAKEITH STANFIELD: (As Bill O'Neal) These ain't no terrorists.

KALUUYA: (As Fred Hampton) You can murder a liberator, but you can't murder liberation.

MONDELLO: They told The Hollywood Reporter they'd originally hoped their film would perform about as well as "Straight Out Of Compton," which earned $200 million worldwide. The pandemic lowered that estimate. And Warner's decision to stream all its films the same day they hit theaters lowered it further. Left with no choice but to go along, instead of $200 million, "Judas And The Black Messiah" has made less than $6 million.

KALUUYA: (As Fred Hampton) ...To my Black people.

MONDELLO: It's not easy to imagine a Steven Spielberg being put in that position. Is this another way of saying Hollywood's power and privilege still resides mostly with white men - the power to maximize box office, the privilege of making event pictures so expensive they can't be treated as loss leaders for streaming services? Well, sure. But while dollars are important, for filmmakers who have traditionally been marginalized, they are not all-important. This pandemic year will go down in history as the year without blockbusters, not one single billion-dollar superhero epic or action adventure. But it will also be remembered as a watershed for inclusion. The Motion Picture Academy has already made history by nominating the most diverse slate of actors ever, as well as a record number of women.

MCDORMAND: (As Fern) I need work. I like work.

MONDELLO: Had studios thrown their weight behind the usual big-budget spectacles, that might not have happened. By letting less expensive, more socially conscious films lead the way back to cinemas, studios have possibly inadvertently ended up championing work that speaks to this moment. The blockbusters will return, along with no doubt a lot of the inequities that seem wedded to the cash they generate. In the meantime, though, audiences get to celebrate artists for whom the recognition that awards bring arguably has far greater value than dollars. I'm Bob Mondello. Transcript provided by NPR, Copyright NPR.

An earlier version of this story referred to fictionalized stories up for Oscars without noting that the title character in Ma Rainey's Black Bottom was a real blues singer. 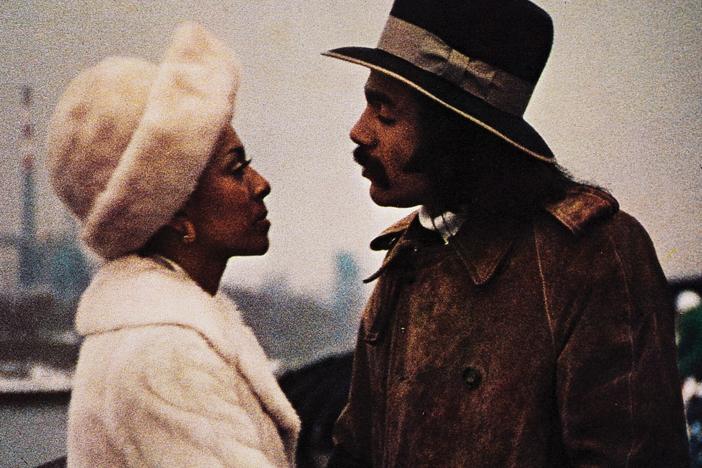 Super Fly at 50: A blaxploitation classic that remains a powerful pop culture force

The movie's gritty, authentic depiction of street life and its flamboyant lead character created archetypes that have inspired legions of future storytellers and musicians. 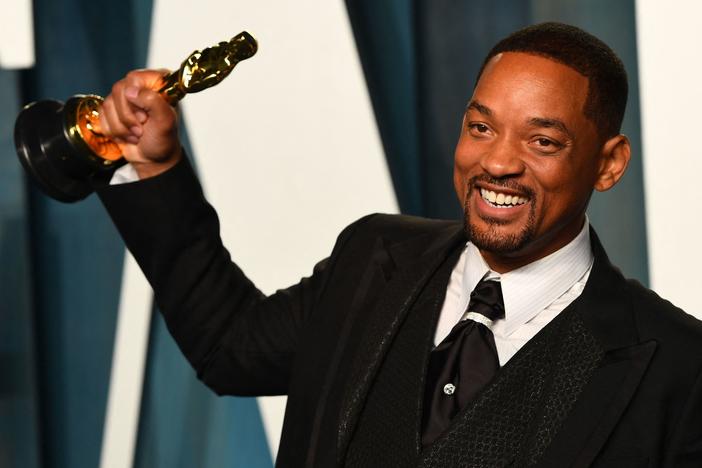 Should Will Smith have been allowed to collect an Oscar after he slapped Chris Rock?

When the moment came for the Oscar show's producers to step up and say that someone who commits violence on live television doesn't get their moment in the winners' circle, the producers blinked. 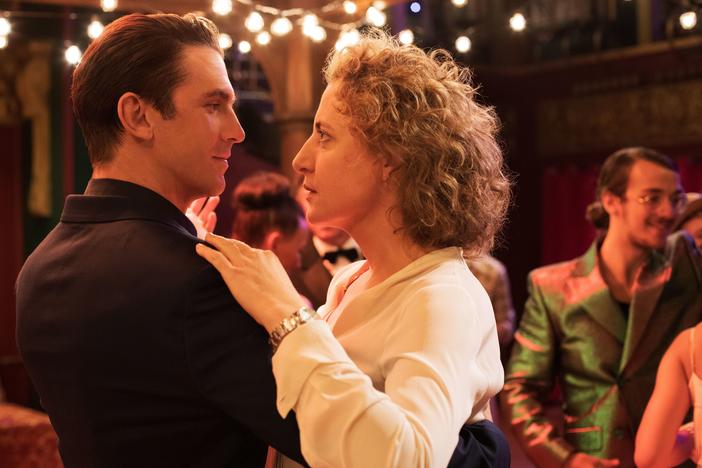 In 'I'm Your Man,' Failing At Romance Is Part Of The Algorithm

Dan Stevens stars as the android of Maren Eggert's dreams in the German romantic comedy "I'm Your Man."