We have another of those regular numbers that gives us the shape and direction of the U.S. economy. This is a number for retail sales, and it shows dramatic improvement. We're going to talk about that now with NPR's Scott Horsley. Scott, good morning.

INSKEEP: What do the numbers show?

HORSLEY: This is a report from the Commerce Department. It shows, after a modest slump in retail spending back in February, there was a big surge in March. That February slump was blamed in part on severe winter weather, and March really looks like a dramatic spring thaw that came after that. Retail sales soared 9.8% last month.

HORSLEY: And the detail here is interesting. We saw especially strong sales of clothes and sporting equipment and restaurant meals. So you get the picture - people were anxious to get out of the house, get outside, enjoy the warmer weather and maybe feeling a new sense of pandemic freedom with some new vaccines coursing through their arms.

INSKEEP: I'm just kind of enjoying the notion of all these people, you know, kind of walking around for the last year in jeans or sweatpants around the house and saying, I've got to get some clothes, got to dress up.

HORSLEY: Time for some new clothes.

INSKEEP: I might actually see a human being sometime, you know?

HORSLEY: And then on the converse, online sales, which have really been the sort of symbol of our isolation during the pandemic, rose by a comparatively modest 6% last month. So all in all, this is a very strong retail report.

INSKEEP: What do you see with jobs?

HORSLEY: Yeah, there was positive news on the jobs front as well this morning. New claims for unemployment fell sharply last week. State claims down - were down to 575,000, which is still a big number.

HORSLEY: But it's the lowest it's been since March of last year, during the very first week of the pandemic lockdown. Claims under the federal program for gig workers and the self-employed were also down. And we saw a big drop in the number of people covered by emergency pandemic programs. So there's still a lot of folks out of work. As of late March, nearly 17 million Americans were getting some kind of unemployment assistance. But that is down more than a million from the week before.

HORSLEY: So numbers are moving in the right direction. And that's consistent, Steve, with the really strong March jobs numbers that we were reporting on last week.

INSKEEP: I just want to linger on this for a minute 'cause we're talking to millions of people, and a lot of those people have actually done better in the pandemic than normally - saved a lot of money, economically. But when you say half a million unemployment claims in a week and that is, like, unusually low, that's a lot better than it has been, that used to be catastrophically bad. That's a sign still of enormous churn in the economy. I just want to mark that for people who are doing well. There are a lot of people who are, in one way or another, doing very badly or just in transition right now.

INSKEEP: What does that mean for the larger U.S. economy?

HORSLEY: Well, the retail sales numbers are certainly encouraging. And as you point out, people who have kept their jobs during the last year have saved a lot of money, when they couldn't go traveling or go to concerts or whatnot. We've been expecting them to start spending some of those savings once they felt safe doing so. And on top of that, you've got the government pumping lots of money into the economy. This burst in spending in March coincides with the delivery of those $1,400 relief payments last month. So there's lots of cash floating around to power a recovery.

Federal Reserve Chairman Jerome Powell told the Economic Club of Washington this week he thinks we are at an inflection point, where we're going to be seeing faster economic growth, faster job growth in the months to come. But he cautioned that could still all be upended if there's a new surge in coronavirus infections. As we know, new cases are up about 11% in the last two weeks. There's also the risk out there of more contagious variants. Now we've had this pause in the Johnson & Johnson vaccine. So there are some potential caution flags out there, but still, very positive economic signals this morning.

INSKEEP: NPR's Scott Horsley. Thanks so much. 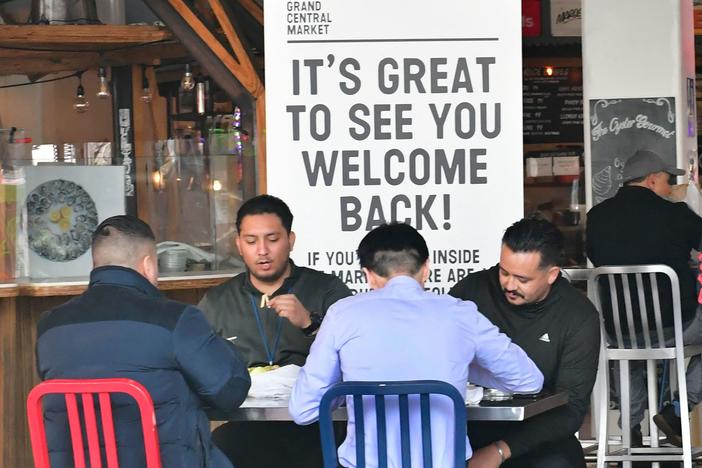 The U.S. economy grew at a rapid pace in the first three months of the year as more people got vaccinated and the federal government pumped hundreds of billions of dollars into people's pockets. 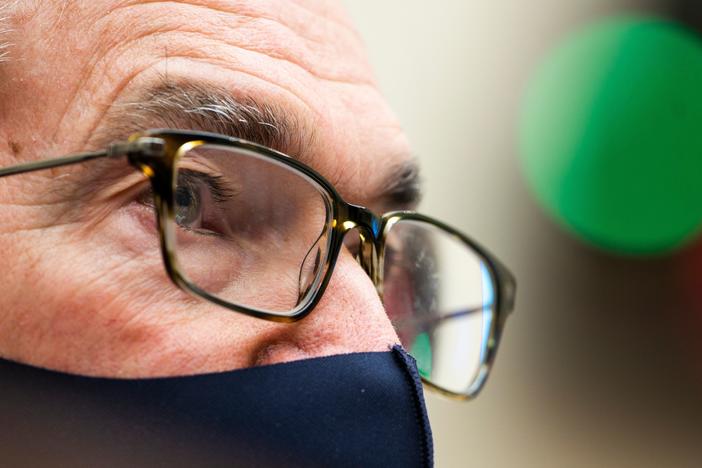 Jerome Powell: Economy Is Better Thanks To 'Dunkirk'-Like Rescue By Fed, Congress

The Federal Reserve chairman tells NPR that the U.S. economy is on a clear path to recovery thanks to the Fed's rescue plan and the stimulus passed by Congress. 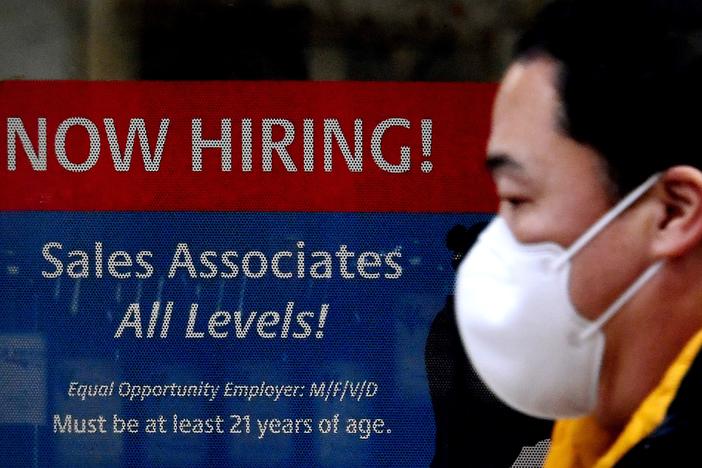 A Sign Of Hope After 'Winter Hibernation': Employers Add 379,000 Jobs

Meanwhile, the unemployment rate dipped to 6.2% last month as the winter wave of coronavirus infections eased.