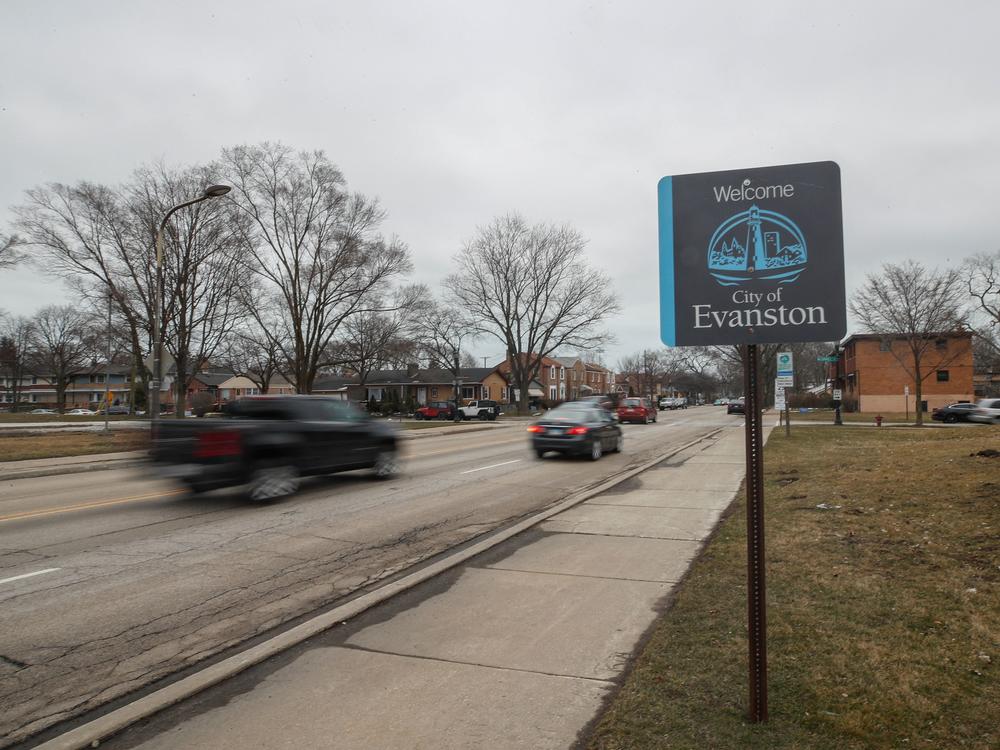 Evanston, Ill., just north of Chicago, is believed to be the first place in the United States to provide reparations to Black residents after its City Council on Monday approved a plan to address racial discrimination in housing. / AFP via Getty Images

The city of Evanston, Ill., will make reparations available to eligible Black residents for what it describes as harm caused by "discriminatory housing policies and practices and inaction on the city's part." The program is believed to be the first of its kind in the U.S. and is seen by advocates as a potential national model.

Evanston's City Council voted 8-1 on Monday to approve the Local Reparations Restorative Housing Program, an official confirmed to NPR over email. It will grant qualifying households up to $25,000 for down payments or home repairs, according to the city, and is the first initiative of a city reparations fund that was established in 2019.

In November 2019, the City Council established a reparations fund to support initiatives addressing historical wealth and opportunity gaps for Black residents, to be funded by the first $10 million in revenue from the city's tax on the sale of recreational marijuana. The housing program is initially budgeted at $400,000.

Robin Rue Simmons, an alderwoman and architect of the reparations program, told NPR in 2019 that the plan aimed to solve a pair of problems facing the community: Black residents being disproportionately arrested for infractions involving marijuana possession, as well as being priced out of their homes.

"We have a large and unfortunate gap in wealth, opportunity, education, even life expectancy," she said. "The fact that we have a $46,000 gap between census tract 8092, which is the historically red-line neighborhood that I live in and was born in, and the average white household led me to pursue a very radical solution to a problem that we have not been able to solve: reparations."

Housing as a top priority

City officials wrote that affordable housing and economic development were the top priorities identified in a series of meetings with community members about what those reparations should look like. Historical evidence made clear the connection between the city's actions and the suffering they caused, the officials added.

As part of their fact-finding effort, officials commissioned a historical report on city policies and practices affecting Black residents from 1900 to 1960 and through the present day. The 77-page report, written by Dino Robinson Jr. of the Shorefront Legacy Center and Jenny Thompson of the Evanston History Center, detailed decades of segregationist and discriminatory practices in areas including housing, employment, education and policing.

The authors wrote that in addition to impacting the daily lives and well-being of thousands of city residents, such policies dictated their occupations, wealth, education and property in ways that shaped their families for generations.

"While the policies, practices, and patterns may have evolved over the course of these generations, their impact was cumulative and permanent," the authors wrote. "They were the means by which legacies were limited and denied."

To qualify for the program, eligible Black residents must either have lived in Evanston between 1919 and 1969 or be a direct descendant of someone who did. According to program guidelines, people who do not meet these criteria may apply if they can prove they faced housing discrimination due to city policies or practices after 1969.

City officials plan to implement the program in the early-to-mid summer and say more details will be made available before then.

The national conversation about reparations

The program has the endorsement of national racial justice organizations that advocate for reparations, including the National Coalition of Blacks for Reparations in America and the National African American Reparations Commission, the city said.

Advocates hope it will boost similar redress efforts in other parts of the country. Ron Daniels, the president of NAARC, told The Washington Post that "right now the whole world is looking at Evanston, Illinois."

Dreisen Heath, a racial justice advocate and researcher with Human Rights Watch, wrote in a Twitter thread that while "local remedy is not a replacement for federal action," it is still important given the harms inflicted on Black communities by various levels of government.

"What happened in [Evanston] today is historic & will help provide a pathway for other cities," Heath wrote. "It should be treated as such, knowing there is a long way to go for the city of Evanston and the country at large."

Still, the program is not without its critics.

The dissenting vote on the City Council came from Cicely Fleming, an alderwoman who is Black and who traces her Evanston lineage to the early 1900s. In a lengthy statement, she said she is fully in support of reparations but denounced the initiative as "a housing plan dressed up" as such.

She said the plan allows only limited participation and does not grant enough autonomy to the community that has been harmed — unlike cash payments, for example, which she said allow people to decide what's best for themselves. (According to the city's website, it does not have the authority to exempt direct payments from state or federal income taxes, meaning recipients of any such stipends would be liable for the tax burden.)

Some of Fleming's other criticisms are that the proposal is being rushed to a vote without enough time for community members' concerns to be voiced and resolved and that its limited scope does not do enough to lay the groundwork for longer-term efforts.

"We can talk more about the program details, but I reject the very definition of this as a 'reparations' program,' " she said in her remarks. "Until the structure and terms are in the hands of the people – we have missed the mark."

The program's approval comes as the topic of reparations — for the harms of slavery and ensuing generations of racial discrimination — continues to gain traction and spark debate in American society.

An opinion poll released last August, following a summer marked by nationwide protests against racial injustice, found that 80% of Black Americans believed the federal government should compensate the descendants of enslaved people, compared with 21% of white Americans.

Several places across the U.S. are considering reparations initiatives of their own, including Amherst, Mass., Asheville, N.C. and Iowa City, Iowa.

Reparations are also a topic of conversation at the federal level, where HR 40, legislation proposing the creation of a commission to study and develop reparations proposals for Black Americans, has attracted renewed interest since its introduction in 2019.

White House press secretary Jen Psaki has said that President Biden supports the idea of studying the issue but did not say whether he would sign such a bill if passed by Congress. 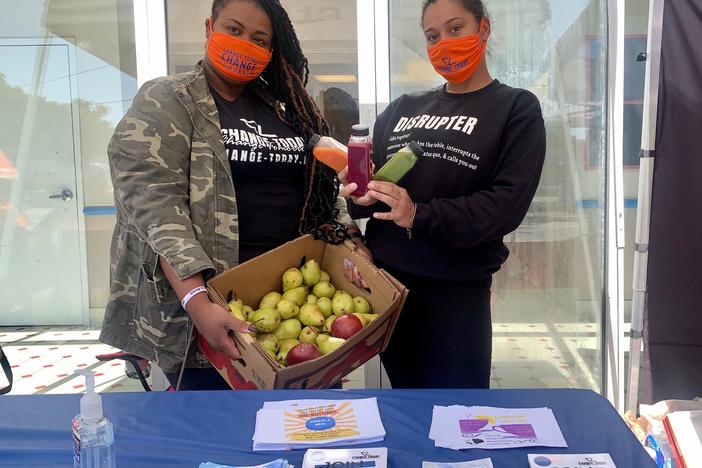 The anonymous donor said that while investigating the origins of their family's wealth, they discovered their great-grandfather had owned six enslaved people in Bourbon County, Ky. 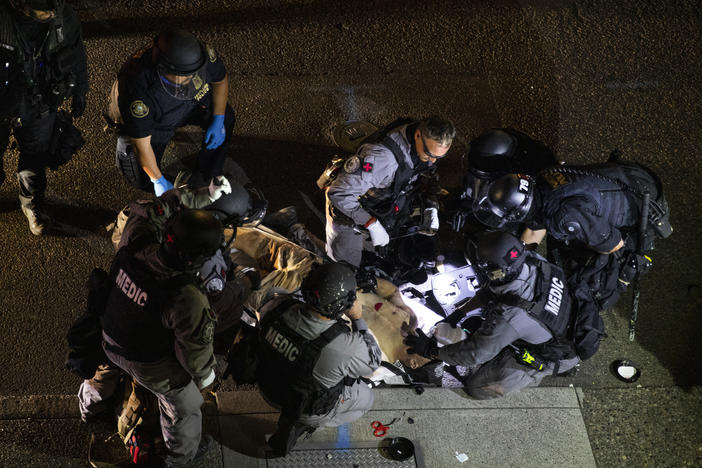 Michael Reinoehl's death came as VICE News aired an interview in which he said he shot a Patriot Prayer supporter in what he believed was self defense. 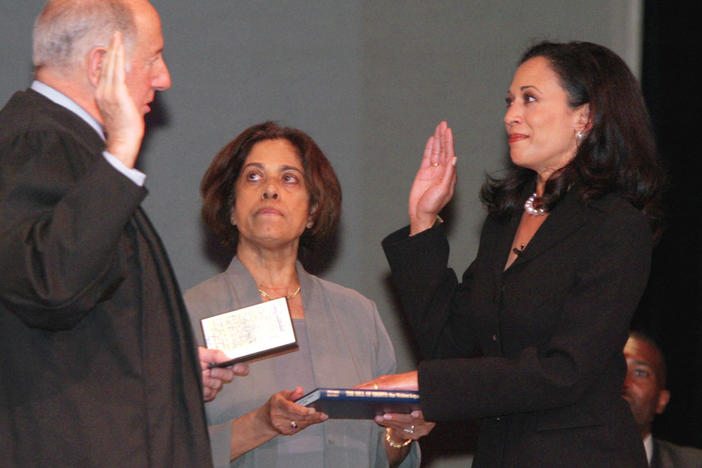