When Republicans Attack 'Cancel Culture,' What Does It Mean? 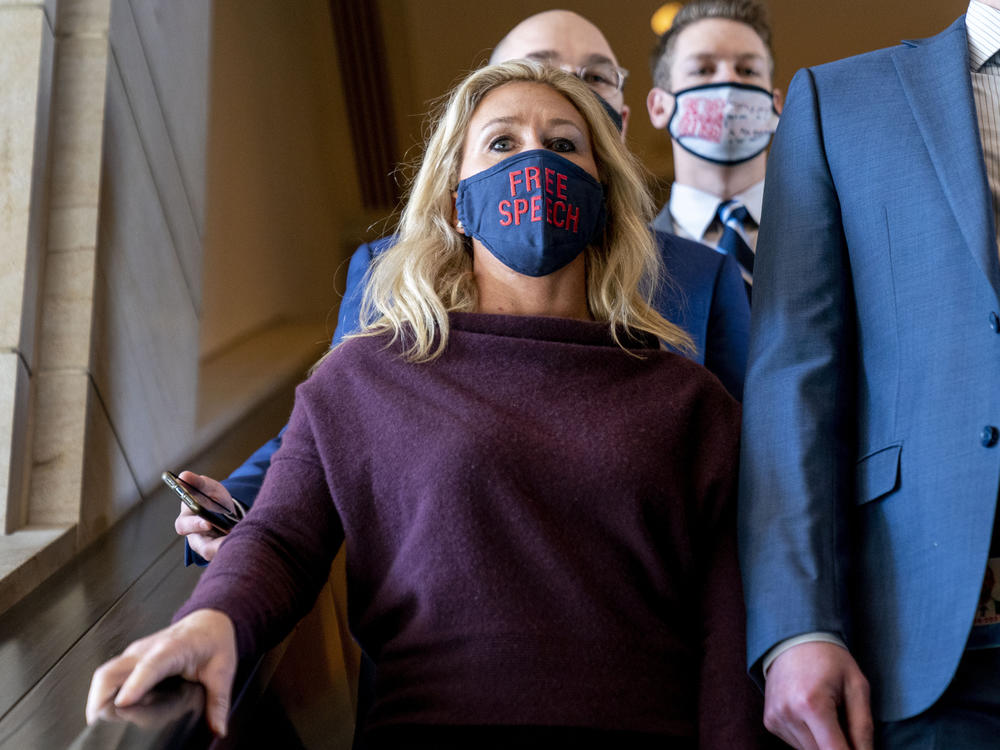 Caption
Rep. Marjorie Taylor Greene, R-Ga., goes back to her office after speaking on the floor of the House Chamber on Capitol Hill on Feb. 4.

No, not cancel culture the phenomenon (that is, if you believe it is a phenomenon, an opinion that is itself contentious). Rather, "cancel culture" is everywhere — as in, the phrase that inundates you lately when you listen to a political speech or turn on cable news.

The phrase is so pervasive that it's arguably background noise in American politics now — just part of the wallpaper, a pair of words you might easily (or, depending on your feelings, happily) breeze past every day without paying it any attention.

Republicans have for a long time used the phrase "cancel culture" to criticize the left. But lately they have seized on it aggressively, at times turning it on each other.

Ohio Rep. Jim Jordan has been defending his fellow Republican, Georgia Rep. Marjorie Taylor Greene, as she was stripped of her House committee assignments following her support of conspiracy theories including QAnon, as well as racist social media posts.​

"If you look at Matt Gaetz going to Wyoming, because — what — a tough woman has an independent view and he doesn't want to go out and explain why he didn't vote for impeachment?" Kinzinger told NBC's Chuck Todd. "That's totally GOP cancel culture!"

Greene and Cheney, of course, still have congressional seats and sizable social media followings, and they appear regularly on national television. All of which raises the question of what exactly it means to be "canceled."

In about half a decade, the phrase has gone from its slang origins to being laden with partisan political baggage. And the recent GOP fixation on cancel culture is, for some, a sign of a party that has strayed from its core tenets.

Where did "cancel" come from?

Six or seven years ago, the idea of "canceling" someone was largely used among younger people online, particularly on Black Twitter, as Vox's Aja Romano has explained.

In that usage, "cancel" refers to a pretty unremarkable concept, says Nicole Holliday, assistant professor of linguistics at the University of Pennsylvania.

"It is used to refer to a cultural boycott," she said. "We've had the term 'boycott' forever and ever. It just means, 'I'm not going to put my attention or money or support behind this person or organization because they've done something that I don't agree with.' That is not new, that's very old."

In other words, it was just the marketplace of ideas at work.

But as the concept gained popularity, concerns grew, particularly among media and political elites, about the threat of online mobs shutting down speech. That perceived punitive atmosphere came to be known as "cancel culture," and people on the left were often accused of perpetuating it.

"If people say, 'hey, I personally don't like this person, so I'm not going to buy the products,' that's one thing," said Yascha Mounk, a political scientist and creator of the newsletter Persuasion, which has decried so-called "cancel culture."

"But a lot of it is concerted efforts to force institutions to de-platform people," he said. "It's firing people for imagined or very minor offenses because of sort of online media mobs and so on."

Mounk is especially concerned about the fact that even non-public figures have lost jobs as a result of online pile-ons, as he detailed in The Atlantic. To him, that is a clear sign things have gone too far.

But now, even to some who decry "cancel culture" as a problem, the phrase has been overstretched to defend people like Marjorie Taylor Greene who have expressed offensive and violent views.

Mona Charen is policy editor at the right-leaning magazine The Bulwark, and worries people "canceling" each other stifles free expression. She wrote, for example, in defense of former New York Times writer Bari Weiss, after Weiss became the focus of the "cancel culture" debate when she resigned from the paper after outcry over some of her writings and online statements.

While Charen still worries about that, she also feels the phrase "cancel culture" has outgrown its usefulness.

"Honestly, I think we should probably retire the phrase 'cancel culture' at this point, because it's losing its meaning when people just use it to mean, 'I resent your drawing attention to my crazy ideas,' " she said.

Cancel culture and the GOP's future

With the constant repetition of the phrase "cancel culture," the idea of "cancellation" has strayed from what it once stood for.

Simultaneously, the GOP's cancel culture fixation may be seen as a sign that the party is straying from what it once stood for, and instead fixating on non-substantive debates.

"There truly were 15 years ago differences of policy for which people would say, 'Hey,' for instance, 'Arlen Specter, at what point are you still a Republican? Because you believe a lot of things that are counter to what many conservatives and many people who animate the party believe,' " said conservative author and CNN commentator Mary Katharine Ham.

Specter was a moderate Republican senator who eventually became a Democrat. In contrast, Ham points to the Arizona GOP's recent decision to censure several of its most visible members, including conservative Arizona Gov. Doug Ducey.

"​Now, the condemnations in Arizona are for Doug Ducey and others not being sufficiently helpful to President Trump and those who support him," she said.

Ham says it's not clear how this tone might ever change from a fixation on a "cancel culture" war back to tenets like limited government and lower taxes.​

"Would I love to get back to talking about policy? Sure, but there is to some extent a need to recognize that that might not be what your voters want," she said. "The way that social media is structured, you get a payout for high emotion, for clickability. And your 40-point tax plan is not emotional or clickable."

The right shows no sign of letting go of attacking "cancel culture" on the left, either. It was even invoked by former Trump's lawyer in the impeachment trial on Tuesday.

And when the annual Conservative Political Action Conference is held later this month, it will be with theme: "America Uncanceled."

Language gets stretched like this all the time, UPenn's Nicole Holliday says. In fact, there's a term for it: "semantic bleaching."​

"Semantic bleaching kind of refers to the process where words don't have the meaning they had before," she said. "They kind of come to mean nothing or something that is purely pragmatic, like just functional, but not really like laden with meaning.

"Semantic bleaching" has happened for nonpolitical words, like "literally," and more political phrases, like "politically correct" and "woke" (a word NPR's Sam Sanders eulogized in 2018).

As with the word "cancel," both of those terms went from their original meaning to being political weapons used by people claiming concerns about free expression. Political correctness, for example, was an in-joke among liberals before it was a political cudgel.

"In the '70s and '80s, it was originally used by leftists kind of to make fun of themselves," Holliday explains. "By the time it entered the mainstream in the '90s, everybody was using it as sort of an attack. It wasn't any longer in the community that it originated in. And then I think we're seeing the same thing kind of with 'cancel.'"

"Cancel," "woke" and "political correctness" all also happen to be phrases that can be (and have been) used to sincerely debate the best way for a society to be inclusive. But that also is perhaps what made them so easily weaponizable: those original usages imply that there are ideas or words that are not inclusive — that for discourse be inclusive, some speech has to be excluded.

And that idea is bound to get some people very angry in a country that deeply prizes free speech, but does not agree on what "free speech" means. 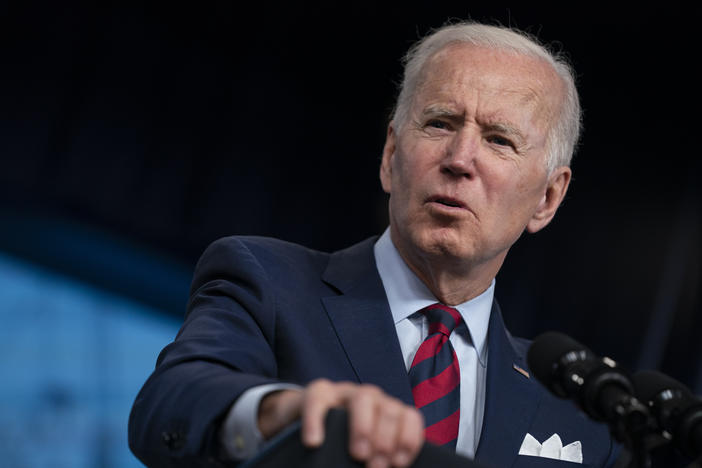 Can Biden Join FDR And LBJ In The Democratic Party's Pantheon?

The sheer scale of the Biden agenda finds an analog in the early achievements of Franklin D. Roosevelt and Lyndon B. Johnson. But which of those offers the better insight into what's happening now? 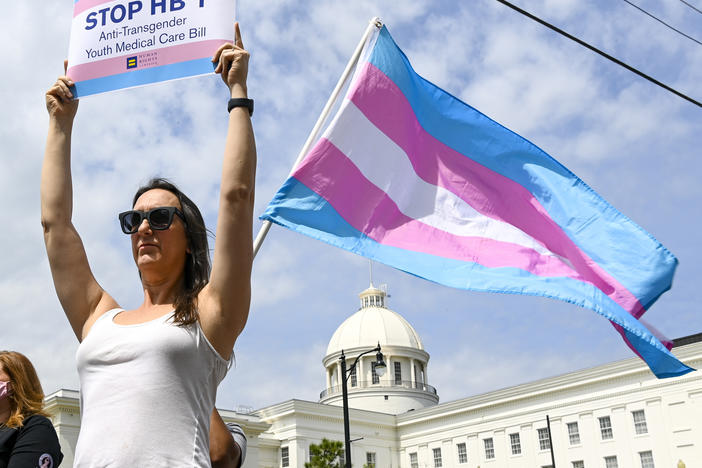 Members of the two parties are split on how transgender students should participate in sports, according to an NPR/PBS NewsHour/Marist poll. But opposition to legislating the issue is roughly uniform. 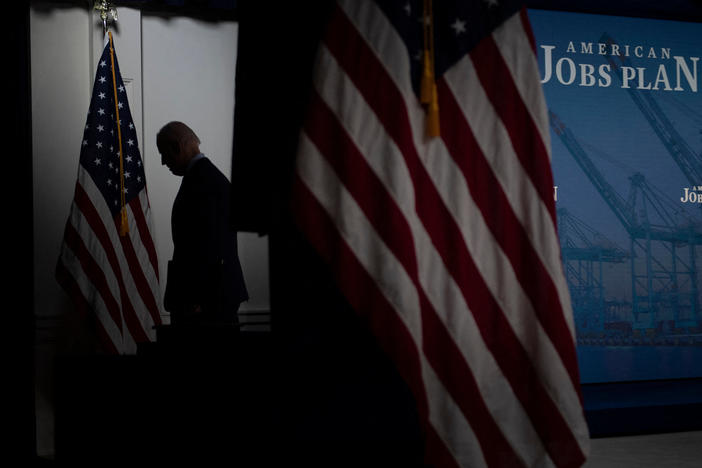 With His Legacy In Mind, Biden Seeks U.S. Transformation With Infrastructure Plan

The president's overall approach to legislating so far — on a big, bold agenda — is winning plaudits from political strategists, left and right.