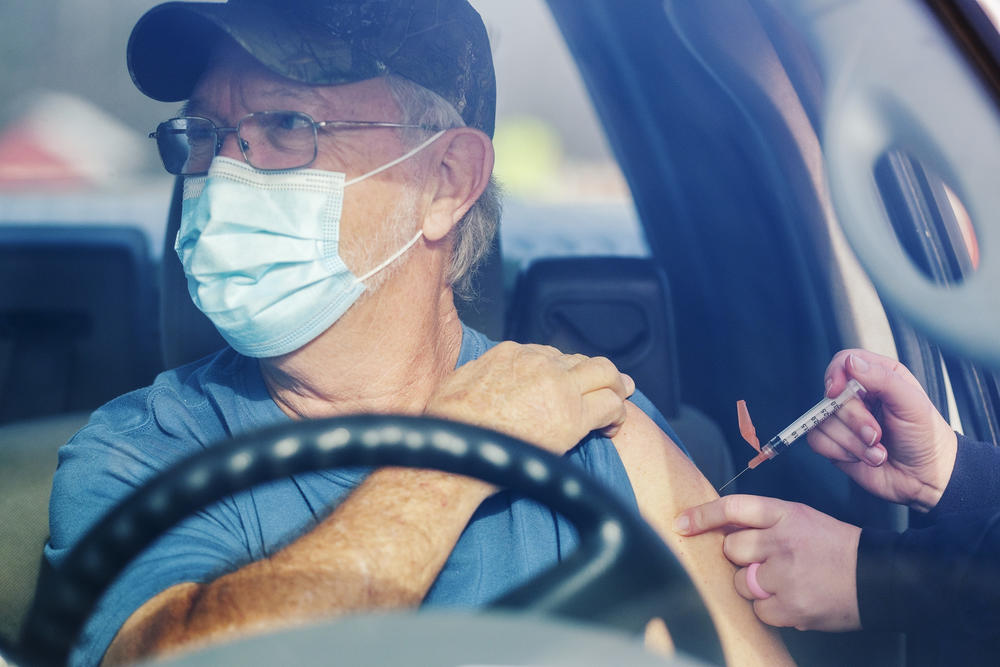 Bob Sapp gets vaccinated against COVID-19 in Cochran, Ga. on Monday January 25, 2021. The South Central Health District which includes Cochran was on pace to vaccinate as many as 300 people at the six hour vaccination event where Sapp was able to make an appointment.

Health care workers and long-term care staff and residents were first on the list when the shots arrived in Georgia in mid-December. Later that month, Gov. Brian Kemp and Department of Public Health Commissioner Dr. Kathleen Toomey announced people 65 and older, law enforcement and first responders would be added to the list.

Since then, a new semester has started for Georgia’s schools, and a series of educator deaths along with quarantine-caused staff shortages across the state have spurred calls to bring teachers and school workers onto the list. That would add another 400,000 people to the more than 2 million eligible now. Teachers are part of the next group scheduled to be vaccinated, along with other essential workers, but with a low supply of vaccines being shipped to the state, there is no telling when they could get their turn.

Kemp has resisted calls to add educators early, saying he sympathizes with them, but the state does not yet have enough vaccines to immunize its most vulnerable population. Even after the Biden administration last week announced a boost to state COVID-19 vaccine dose allotments, Georgia is receiving about 146,000 per week.

“Thanks to our expanded weekly allocation from the federal government, we will continue taking necessary steps to protect elderly Georgians — especially those in our nursing homes — front-line health care workers, and first responders,” he said Thursday. “Demand for the vaccine still vastly outweighs supply, so I continue to ask all Georgians to wear a mask, practice social distancing, and follow public health guidance as we get shots in arms as safely and as quickly as possible.”

The governor’s spokesman, Cody Hall, noted over the weekend that some public health districts and providers have paused scheduling new appointments because of the lack of vaccine supply.

Both sides have strong claims for eligibility, said Dr. Isaac Chun-Hai Fung, associate professor of epidemiology at the Jiann-Ping Hsu College of Public Health at Georgia Southern University. Seniors are more susceptible to serious complications and death from COVID-19, but teachers gathering in classrooms filled with children every day are potentially more exposed, and when teachers become sick or are quarantined, it can disrupt life for entire communities.

“We as a society need to judge what is important and how we will prioritize. There is no clear cut answer,” he said. “I don’t want to pass any value judgement on the decision one way or the other because I can see that many elderly people are eagerly awaiting vaccines, and to keep the death rate down, elderly people have to be vaccinated. There’s no perfect solution.”

Just over 85% of Georgia’s more than 12,000 COVID-19 deaths have been among people 60 or older, according to state data, and senior citizens are still having a hard time finding vaccines, said Kathy Floyd, executive director of the Georgia Council on Aging.

“I fully support teachers getting priority to be vaccinated, but not before seniors,” she said. “We’re still struggling with how to vaccinate especially homebound seniors and seniors who have not been able to get an appointment because of the reliance on using a computer, and that still needs to be a priority.”

Some seniors might be better able to shelter in place than younger adults, Floyd said, but not everyone can do that, and those who can are still vulnerable.

“We never like to compete for resources,” she added. “It’s tough to line up people against people. But we need to remember that we haven’t gotten seniors covered yet, and seniors, because of their age, are going to be more vulnerable.”

A string of Georgia elected officials from Democratic Congresswoman Carolyn Bourdeaux to local school board members lobbied the state and federal governments to move teachers up the list last week.

Schools often serve as a safety net for children in difficult circumstances, said state Sen. Jen Jordan, and vaccinating workers there would help ensure children can get the resources they need.

“For so many Georgia children all over this state, schools are where they can get a free meal, they can eat,” Jordan said on the Senate floor Wednesday. “They’re fed socially. They’re fed emotionally. The importance of schools and teachers cannot be overstated.”

“We say we value teachers every day, but talk is cheap,” the Atlanta Democrat added. “It’s time to act so that we can open schools back up, but do it safely.”

“Because of the nature of their job, they’re in close proximity to kids who are almost an absolute churn in our society, the kids are exposed to many different elements, and the teachers in turn are exposed to kids,” said Tippins, who is former chair of the Senate Education and Youth Committee and current chair of the Higher Education Committee. “Another aspect of it is getting kids back in face-to-face instruction, and there’s several benefits to that. Face-to-face instruction is superior to virtual for most students.”

Tippins and Jordan represent parts of Cobb County, where three educator deaths have been reported in just over a month. Hendricks Elementary School teacher Patrick Key died on Christmas Day. Dana Johnson, a teacher at Kemp Elementary School, and Cynthia Lindsey, a paraprofessional at Sedalia Park Elementary both died Jan. 21.

The debate over when to vaccinate teachers came to a head in northeast Georgia last week, when the state Department of Public Health temporarily suspended shipments of COVID-19 vaccines to the Medical Center of Elberton after workers there gave shots to school workers.

“It is critical that DPH maintains the highest standards for vaccine accountability to ensure all federal and state requirements are adhered to by all parties, and vaccine is administered efficiently and equitably,” said department spokeswoman Nancy Nydam.

The suspension is set to end July 27.

The medical center will continue to provide second doses until it runs out of supply. Five other providers in Elbert County will receive a total of 2,100 doses to make up for the difference, the county health department announced Friday.

“I’m a single parent, and I don’t have an option to work from home if the kids are out of school for an extended period of time,” said Boon, who works as a restaurant server. “I took a lot of time off from work around the holidays because the day care was closed too. I made it work, but I’m sure it was a hardship on other families.” 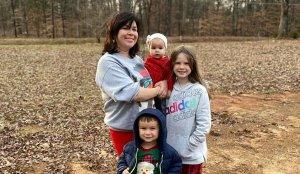 Elbert County mom of three Jaime Boon said she supports immunizing schoolteachers now and is disappointed in the state’s decision to withhold new vaccines from the Medical Center of Elberton for vaccinating school workers.

“To begin with, teachers should have already been included in Phase 1,” she added. “Enough time has passed that we should have been able to move into the next phase that allows for teachers to be vaccinated. So now our small county is being punished for trying to keep our educators and children safe.”

For public health professionals, the first consideration in matters like this is the relative risk of the groups, so it made sense to prioritize health care workers and long-term care residents and staff because they are so exposed to the illness, he said.

“But to then say, well, anybody over 65, regardless of their health status or relative risk is now next and that we’re pushing them in a line ahead of essential workers, and I’m talking about both educators and essential workers doing so many other things that we know are at higher risk, to me, didn’t make sense,” he said. “To push them in front of teachers and staff in school settings when safely getting kids back to in-person instruction is such a high priority doesn’t make sense to me.”

“Given that we’ve already opened those gates, I think the appropriate thing to do would be to add teachers to the current group of people that we’ve made the vaccine accessible to,” he added.

Other states are taking a variety of approaches. In states like Arizona, California and Kentucky, teachers and seniors are part of the same phase, right after health care workers and long-term care residents and staff.

In the plans of states like North Carolina, Wisconsin and New Jersey, older adults come before essential workers, but in states like Oregon, educators are scheduled to be vaccinated before seniors.

“It’s a dilemma not only here in the United States, but also in other countries,” Fung said. “I think the country of Israel provides us with an example of the right strategy.”

Israel has by far the highest per capita vaccination rate of any nation, according to Our World in Data. The country has been helped by having a relatively small population combined with a modern health care infrastructure providing universal health care, but its government has also made the vaccination effort easier by allowing flexibility into the system, Fung said.

In Israel, seniors get priority for the vaccine, but younger adults can line up outside vaccination sites and receive the doses of seniors who did not come to their appointments, he said.

“Their society has this arrangement that has a lot of flexibility to the front-line health care workers while also following their national guidelines,” he said. “I think maybe instead of being a dichotomy, one way or the other, we can come up with a more innovative way and perhaps look outside our borders to get insights.”