Despite Setting A New Tone, Biden Faces Tough Decision On Dealing With Congress 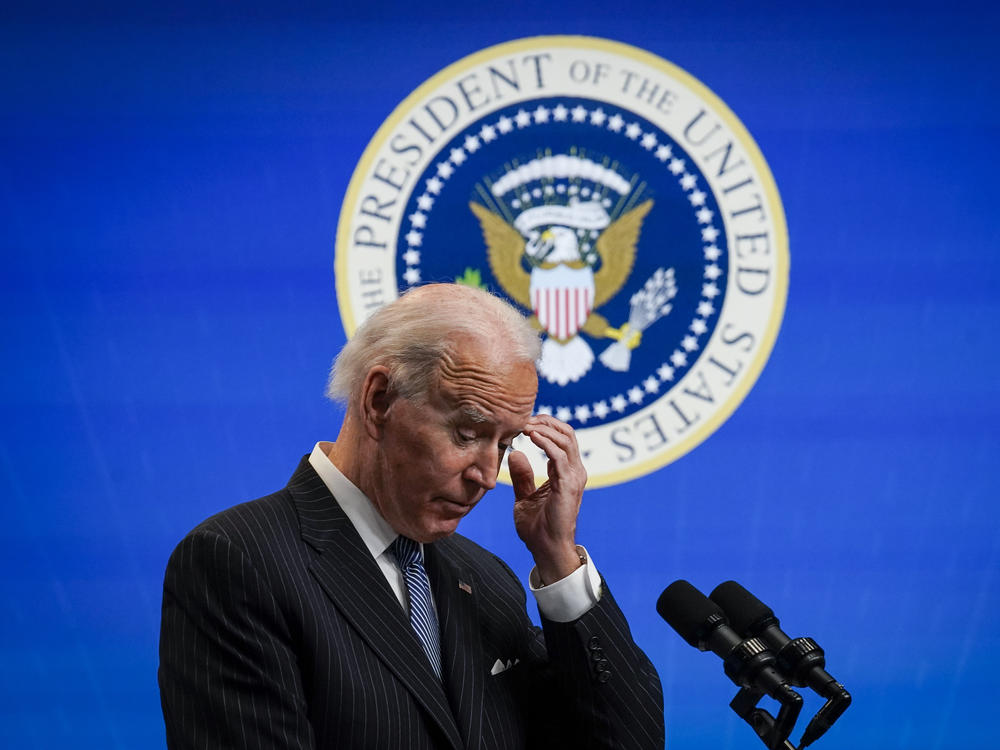 Caption
President Biden pauses while speaking after signing an executive order related to manufacturing, at the White House on Monday. Biden is off to a fast start but is running into resistance in Congress.

Joe Biden's first full week as president has been a gusher of executive orders, some big legislative proposals — and a very different model of presidential leadership than his predecessor.

Traditionally, the first week is when new presidents set the tone. For Biden, that's all about taking down the temperature and trying for "unity." But unity means different things to different people.

Biden would prefer bipartisanship, but he also believes he needs to be bold to fix the COVID-19 pandemic and the suffering economy. So he faces a looming decision for whether — and how long — to hold out for compromise or bull through with a divisive Senate procedure.

"I don't expect we'll know whether we have an agreement or to what extent the entire package will be able to pass or not pass until we get right down to the very end of this process, which will be probably in a couple of weeks," Biden said Monday.

A couple of weeks is not a long time. The decision he makes could define his presidency.

For Biden, his first week has been disciplined and orderly, which is a reflection of how he ran his campaign, said Barbara Perry, director of presidential studies at the University of Virginia's Miller Center.

"A moderate persona and personality" is how Perry described Biden, "someone who's not a great orator, not going to set the world on fire, but is well-meaning, a good soul, feels people's pain."

It's night and day compared to former President Donald Trump's style of leadership, which was centered on chaos and bent on keeping the cameras rolling and eyeballs glued to his Twitter feed.

Biden is hoping that steadiness and decency will have more success.

In the Biden White House, there are lots of briefings and fact sheets, a return to what one could call regular order.

Biden keeps his public appearances short; he doesn't always take questions; and when he does tweet, his tweets are pretty basic, like his simple declaration that the U.S. was rejoining the Paris climate agreement.

Or why he believes in expanding access to health care.

No ALL CAPS, no exclamation points, no stoking the culture wars. And, as Biden keeps saying, he wants to "get things done for the American people."

"Today is climate day at the white House, which means that today is jobs day at the White House," Biden said, also attempting to combat a Republican talking point that climate action could lead to job losses.

Trump liked to put his personal stamp on everything, but Biden takes every opportunity to emphasize that he wants a presidency that is about treating everyone with dignity.

Biden made a point of that during a virtual swearing-in of political appointees.

"If you ever work with me," the president said, "and I hear you treat another colleague with disrespect, talk down to someone, I will fire you on the spot."

Is "unity" about bipartisanship?

Another core Biden message — he prefers bipartisanship if possible, and he's always open to compromise.

"Whether we get it all done exactly the way I want it remains to be seen," Biden said, "but I'm confident that we can work our way through."

And Biden's North star is the word unity. In his definition, though, it's not necessarily bipartisan legislation, it's just tamping down the partisan dumpster fire that has burned through Washington and much of the rest of the country.

Biden's tamped-down tone from the tumult and name-calling of Trump makes it hard to demonize Biden, although Republicans are trying, with the same playbook they used during the campaign.

"President Biden is talking like a centrist, using the words of the center, talking about unity, but he is governing like someone from the far left," said Florida Sen. Marco Rubio.

Biden may not succeed in the long run, but for now, he's enjoying a little honeymoon. He starts with an approval rating in the mid-50s, something Trump, in four years, never achieved.

Make no mistake: The challenges Biden and the country are facing are daunting. Still, there is a potential upside for Biden, said David Axelrod, who was President Barack Obama's top strategist.

"Great presidents emerge from great crises," Axelrod said. "This is Biden's opportunity. He is facing a set of circumstances that are as severe as any president since Franklin Roosevelt — huge challenges, but also the opportunity to lead the country out of this morass."

To do that, it will take more than just setting a new tone. Biden's success will be measured by two simple metrics — how quickly the country gets vaccinated against the coronavirus and how quickly the economy gets rolling.

Those two are inextricably tied together, but that will take months. Biden is trying to make a dent in both right away with a big $1.9 trillion relief plan.

But that plan is already meeting resistance from Republicans in Congress. That's why Axelrod says Biden has to decide soon exactly how he will try to get that bill through.

"He has two competing imperatives," Axelrod said. "One is to do things quickly to get the country moving, and the second is to do them in a way that doesn't connote disunity. He wants to show that he can work across the aisle. That's something that people are hungering for. He's got to weigh these equities. How much is cooperation worth versus speed?"

This week, Biden gave the first hints of how he's thinking about that trade-off. If he can't get Republican support in the Senate, he can pass parts of his plan with a legislative maneuver called budget reconciliation.

That would allow him to pass certain items, related to the budget, with a bare majority of Democratic votes only. And Biden doesn't sound like he's going to wait long to make that decision, just a matter of a "couple weeks," as he said Monday.

For Biden, this is kind of a do-over. He was in the White House just five years ago, and the two big lessons his team took away from the Obama years were — 1) don't wait too long to find out whether enough Republican senators will work with you; and, 2) if you want to fix an economic crisis, it's better to spend too much money rather than too little.

Now, Biden has set for himself a deadline to see whether his decades of congressional experience and negotiating can get bipartisan buy-in on his first big initiative — or how much of that proposal he's willing to put off for another day. 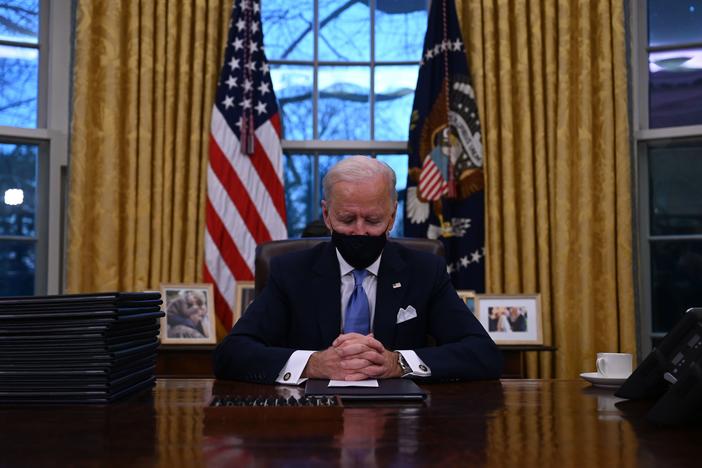 After a chaotic four years, Biden is calling for calm. A new tone was set, but a return to the same old partisan bickering won't solve the problem of millions fed a daily diet of false information. 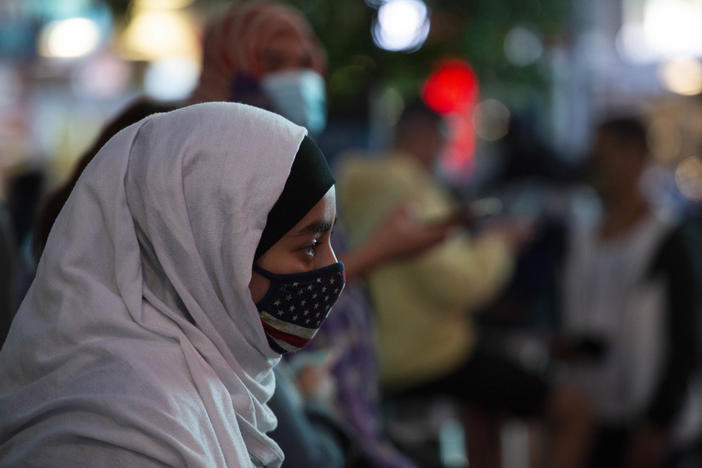 Majority Of Muslims Voted For Biden, But Trump Got More Support Than He Did In 2016

Despite anti-Muslim rhetoric and policies, President Trump appears to have gotten more support from American Muslims in the 2020 election than four years ago. 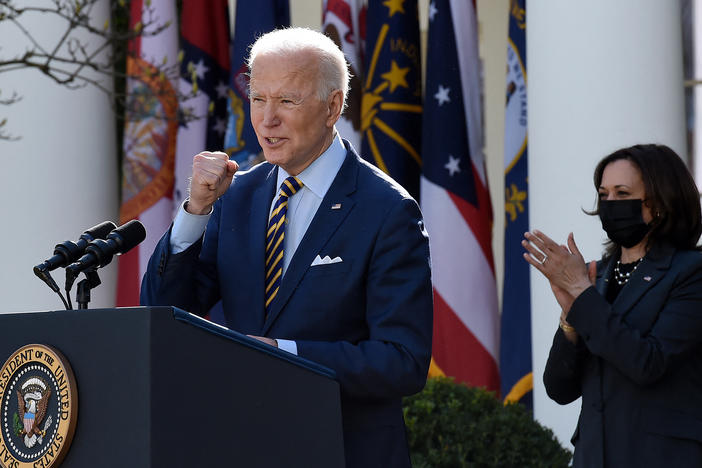 Democrats passed the $1.9 trillion bill on a party-line vote, and Republicans do not appear ready to compromise on infrastructure, voting rights, the minimum wage, immigration or much else.