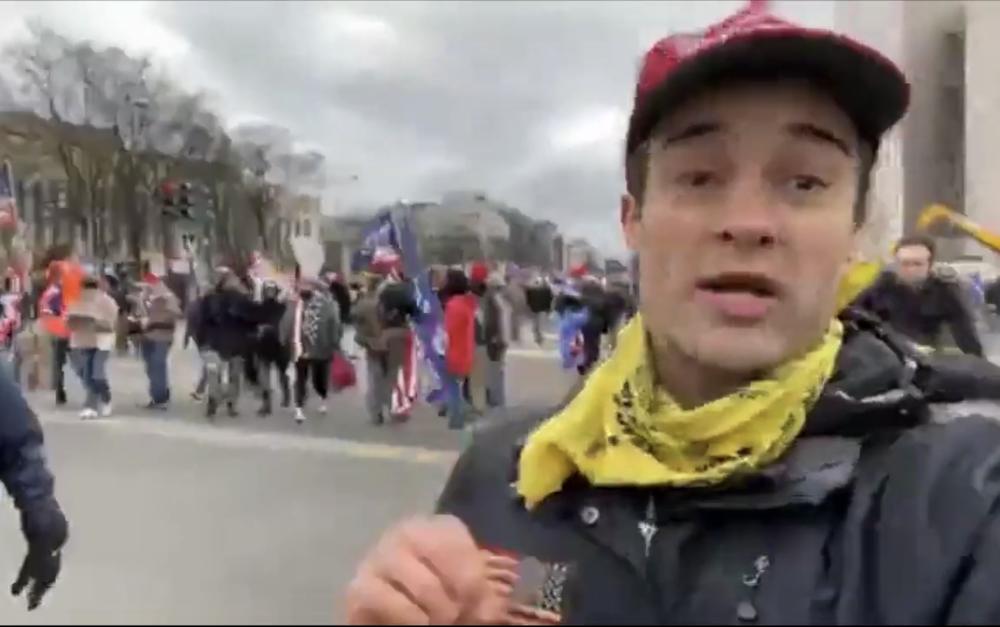 During the march to the U.S. Capitol, Dominic Box appears onscreen as he narrates a video livestreamed through the Savannah Freedom Alliance Facebook group.

A Savannah car salesman with a history of supporting radical conspiracy theories was fired from his job two days after participating in the pro-Trump rally that turned into a violent insurrection last week at the U.S. Capitol.

Dominic Box was fired from Vaden Nissan on Friday, manager Mike McCann told The Current on Saturday. Though McCann declined to share reasons for the separation, The Current learned of multiple complaints made to Nissan’s corporate office and Vaden Nissan regarding Box’s alleged presence at the Capitol during the Jan. 6 rampage.

Box, 30, declined to speak to The Current when reached by phone Saturday.

“I hope you understand,” he said before hanging up.

The Federal Bureau of Investigation over the weekend indicted 13 people on federal charges in connection with the rampage, including a Hiawassee man charged with threatening House Speaker Nancy Pelosi, according to a news release from the U.S. Department of Justice. At least 40 others face charges in Superior Court. All had been photographed as part of the mob ransacking the Capitol.

Box is a relative newcomer to Savannah, but has quickly become a local political activist with a well-documented online history of sharing conspiracy theories, including those of QAnon, the movement which in 2019 the FBI labeled a domestic terror threat for its potential to incite violence. QAnon supporters propagate falsehoods about a global cabal of satan-worshiping, anti-Trump, sex-trafficking ring of liberal pedophiles and were among those, including the Proud Boys militia, that were caught on video during chaos at the Capitol.

Box posted numerous Facebook Live videos and other social media posts of himself in Washington for the rally called for by President Donald Trump as part of his debunked belief that he lost the Nov. 3 election to Joe Biden because of fraud.

The Current reviewed multiple postings, including a livestreamed video posted about 1:30 p.m. Jan. 6 from the Facebook account of the Savannah Freedom Exchange, in which Box addresses viewers as he walks along the central street connecting the White House and Capitol Hill.

“For those of you just joining us, President Trump has called on everybody here, over 250,000 of us, to march down Pennsylvania Avenue … headed towards the halls of Congress,” Box said, turning the camera on himself. “As far as the eye can see, lines coming down every street. Jesus does save.

….I don’t know what you can do to stop a crowd this size with one thing on their mind. And after hearing the president speak, specify the numbers and the ways in which this election was stolen from us, I can definitely say I’d rather be on this side than the other. There are some very rightfully disgruntled individuals here.”

Box walks by streams of people, some carrying Trump flags. While there is no sign of violence in the nearly 10-minute video, he opines that the crowd is “rightfully disgruntled.”

“I don’t know what you can do to stop a crowd this size with one thing on their mind. And after hearing the president speak, specify the numbers and the ways in which this election was stolen from us, I can definitely say I’d rather be on this side than the other,” Box said. “There are some very rightfully disgruntled individuals here.”

In a separate video posted shortly afterward from a Facebook account Box is known to use, viewers could see the chaos unfolding inside the Capitol itself.

The person filming shouts “If you’re watching this live, share it right now,” and then starts chanting, “USA! USA! USA!”

Several people interact with the person taking the video and address him in the comments as Box.

Michelle Solomon of Savannah watched the livestream. Although the person filming the second video did not show his face, the Democratic Party organizer said she recognized Box’s voice from his prior videos.

In the on-screen comments for the live video feed, a woman typed: “Dom are you good? Saying shots fired one injured.”

The video shows a roaring mob of mostly red-capped white men packed inside the corridors of American democratic power, many shouting and gripping cell phones, American flags, blue Trump flags or yellow Gadsden flags. A half-dozen police officers can be seen mostly standing by as the mob packed a spiral staircase.

Another person who commented as the video was streaming live called the scene a disgrace while others seemed to encourage the mob, calling for it to “march on.” 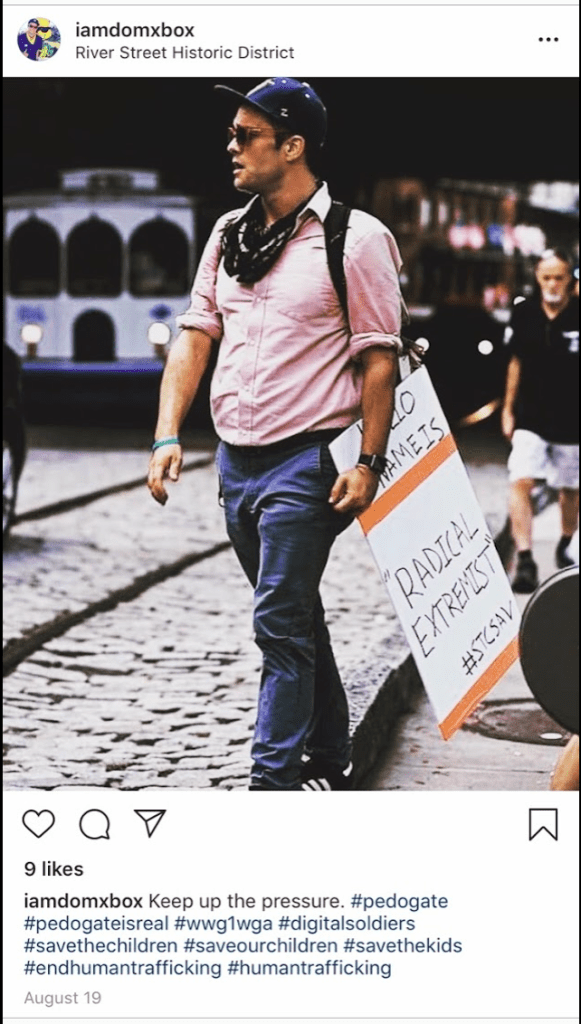 Box, from Joplin, Missouri, first attracted controversy in Savannah in August as the organizer of an anti-human trafficking rally. The rally, at which QAnon slogans, symbols and signs were on display, was attended by dozens of people, WJCL-TV reported, including U.S. Rep. Earl “Buddy” Carter.

Carter later said he was unaware the rally was linked to the conspiracy theorists.

The rally was the first time Solomon encountered Box. She was most disturbed by Carter’s presence and how it might legitimize Box.

“It’s not strange to me that someone who stewed in conspiracy theories for years has come to this point,” she said. “What I care about is he’s been treated as legitimate by local elected officials.”

On Thursday, Carter joined five other Georgia lawmakers including self-described QAnon supporter Marjorie Taylor Greene on Wednesday in formally objecting to the transfer of power from Trump to Joe Biden in the Congressional hearing halted when the pro-Trump mob invaded the legislative building.

“It’s upsetting that our congressmen voted with him, voted to disenfranchise millions in Georgia,” Solomon said. “I think we get distracted by people on the bottom and miss people on top. I just keep coming back again and again: Buddy Carter is a million times more culpable here than Dominic Box.”

In late October, Box showed up at Savannah State University during a rally by First lady-elect Jill Biden. The Savannah Morning News reported Box was among 15 to 20 supporters waving Trump flags on the edge of the rally. When the pro-Trump crowd disrupted the rows of students assembled to hear Biden, a brief fracas ensued. A video of the fracas became popular on Facebook.

While Box was reticent to discuss his alleged role at the pro-Trump rally in Washington last week, he has previously been open about his personal background and political beliefs on social media.

As an 18-year-old student at the University of Arkansas at Fayetteville, Box told the Arkansas Democrat-Gazette that he opposed the upcoming ban on synthetic marijuana issued by the Arkansas Board of Health.

He revealed that he smoked the herb laced with synthetic compounds nearly every day and lit up a joint while speaking to the Arkansas reporter on the phone.

“I think with something like this that isn’t harming anyone; if people aren’t allowed to satisfy that need, then they revert back to crime,” he said, referring to buying marijuana, according to the Democrat-Gazette article. “It’s a definite mood enhancer, and it relaxes your entire body.”

In August 2013, after the Syrian government used chemical weapons in an attack that killed hundreds in Damascus, protesters gathered outside the White House to protest U. S. President Barack Obama’s Mideast policy.

Box, then 21, joined a similar demonstration in Arkansas.

“I had friends that died in Iraq, and I don’t want more people to die for nothing,” he told the Arkansas Democrat-Gazette.

In later online videos, Box explains multiple emotional issues he has dealt with through his life.

One Tuesday in the summer of 2018, a car salesman in Paris, Kentucky, sat in front of his computer’s webcam for a new episode of his Facebook Live series called “Sales Hustlers Spotlight!!” 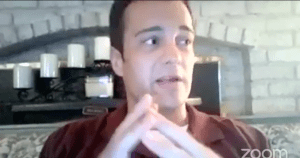 Dominic Box gives an interview to Shawn Hays about selling cars and life.

The featured guest was Box, a fellow car aficionado and someone the host Shawn Hays describes as a close associate, one of the “original hustlers … from the start.”

When asking about Box’s background, Hays makes reference to his unusual political beliefs.

“I bet you a lot of people probably don’t know. They know about your conspiracy theories, right? You know, about your crazy videos. …  but they don’t really know much about Dom,” Hays said. “So tell us a little bit about your childhood and where you are from.”

Box said his mother gave birth to him as a college student. She raised him as a single parent in Joplin, earning a living as a nurse, he said.

Box regularly made the honor roll at Joplin High School and was a member of the National Honors Society, according to the Joplin Globe archives. He played football, tennis and was the lead singer in a heavy metal band called Before His Throne.

Law school was in his sights as a freshman majoring in international business at the University of Arkansas, the Joplin Globe reported. Box described his college experience as typical. He joined a fraternity and developed substance abuse issues, namely with alcohol, he told Hays.

“I got very heavy into the party lifestyle, the fraternity culture of a big SEC school,” Box said. “And though I graduated college, that’s where some of the problems that I’ve had to deal with and try to, and I’m still overcoming.”

In the 45-minute interview, Box said he struggles with anxiety and sense of self.

“I’ve constantly been trying to develop who, really, you know — and this may sound a little crazy to somebody who doesn’t, you know, go through the same thing — who the real me is,” he said.

Box sold Kias in Oklahoma in 2019 before moving to Savannah last spring.

In a public post on Facebook last May, McCann commended Box on his salesmanship at Vaden Nissan and said Box had sold at least a dozen cars that month. Box had been hired about two months prior.

“So proud of this guy right here,” McCann wrote in a Facebook post with pictures of Box. “(Three) months ago I got a call at almost midnight. He told me he wanted to sell for me and asked if I had an opening on the floor.”

This story comes to GPB through a reporting partnership with The Current, providing nonpartisan, solutions-based investigative journalism without bias, fear or favor with clear focus on issues affecting Savannah and Coastal Georgia 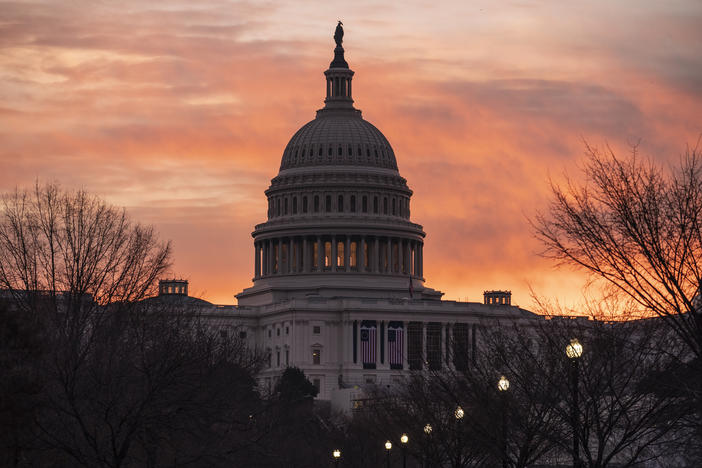 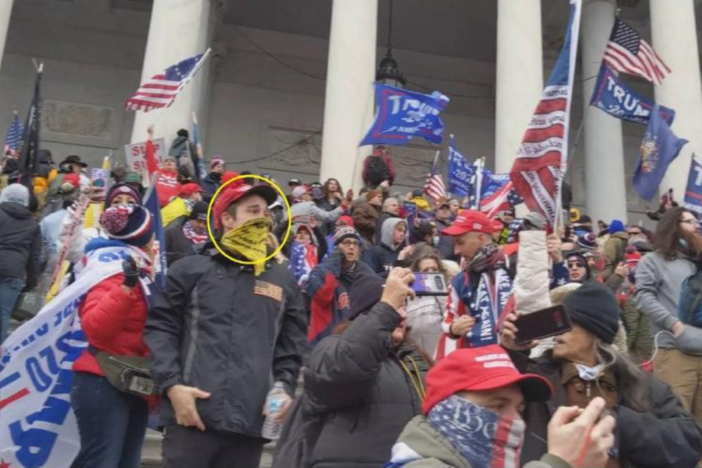 The January hearing for Dominic Box, a Savannah man charged in the Jan. 6, 2021, insurrection at the U.S. Capitol, is two months earlier than originally scheduled. 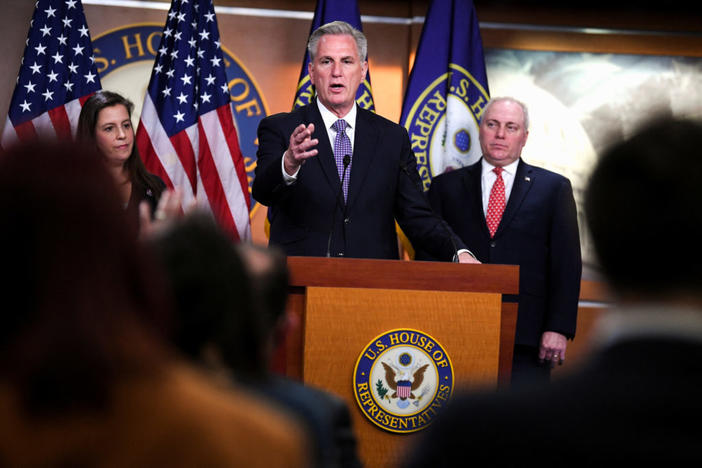