Halftime In Georgia: A Look Back At Kemp's First Two Years As Governor 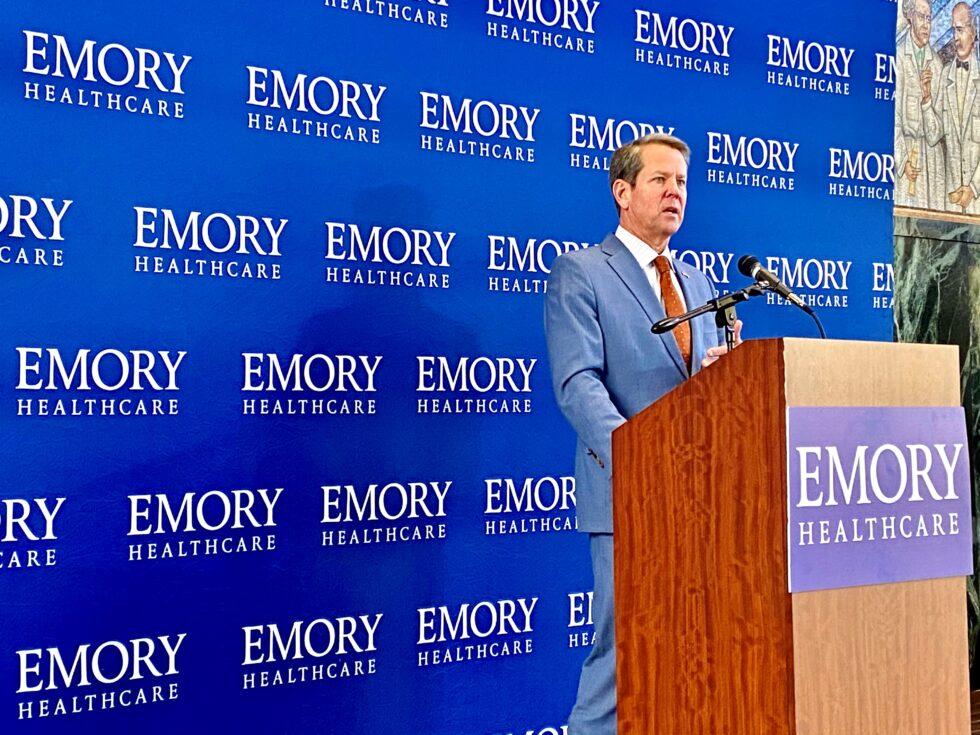 It was bill-wrangling season in the state legislature, and Gov. Brian Kemp was visiting Germany to talk economic ties when word came that the virus spreading from China into Europe could pose a serious threat for Georgia.

By early March, two people in the state had tested positive. Dozens more quickly followed, then the first death. The governor shut down the General Assembly’s legislative session, closed all the public schools and blanketed Georgia with shelter-in-place orders.

In the blink of an eye, the COVID-19 pandemic had swelled to dominate Kemp’s first two years in office as Georgia’s head of state.

“We just dealt with riding these waves as they’ve come over these last months,” Kemp said in a recent interview. “It’s been tiring and grueling, but it’s also just part of what you’ve got to do. … I’ve been working harder than I ever have in my whole life.”

Now halfway into his four-year term, Kemp has been forced to shoulder his administration’s initiatives alongside immense challenges, ranging from the devastation of COVID-19 to the passion of Black Lives Matter protests to a presidential election that has soured the governor’s most powerful ally against him.

Supporters have showered Kemp with praise, hailing the Republican for steering Georgia through storms of crisis and criticism with a captain’s grit. But his detractors see in Kemp a selfish leader concerned mostly with pleasing his own faction of voters in a divided political world — and who looks ready for a Democratic toppling in 2022.

“What is helpful for Gov. Kemp is that he’s got about two years left in his term and a lot can change,” said Andra Gillespie, an Emory University political science professor. “The things that are top of mind for Georgia voters now might not be top of mind in two years.” 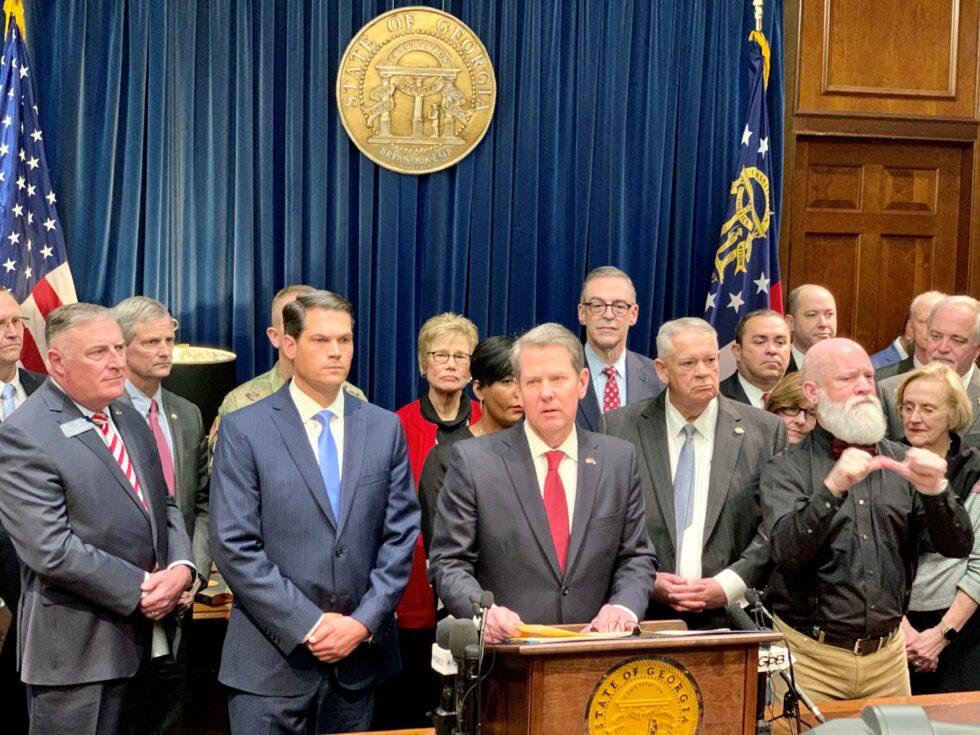 Gov. Brian Kemp calls for vulnerable residents to take precautions as coronavirus spreads in Georgia in March of 2020.

Kemp, a construction businessman from Athens and former state senator, won the 2018 race for governor while serving as Georgia’s secretary of state, a controversial position that drew accusations of voter suppression during his campaign against Democratic nominee Stacey Abrams.

For the most part, Kemp and his supporters say he’s backed up those promises. The Republican-controlled General Assembly’s last two sessions have pushed through more money to police gangs, a big chunk of his promised $5,000 teacher raise, bills to fight trafficking, changes to the state’s Medicaid system and fewer year-end tests for schools.

Kemp also persuaded lawmakers to cut budgets for state agencies twice in the 2020 session: first in March to offset a predicted economic slowdown, then again in June by about 10% after COVID-19 throttled Georgia’s tax revenues.

The budget cuts, combined with the health impacts of COVID-19, hit Kemp with a one-two punch of unpopular decision-making that most governors never face, said Charles Bullock, a University of Georgia (UGA) political science professor.

“I don’t know if anybody’s had this kind of double whammy,” Bullock said in a recent interview. “It’s not always pleasant when you tell departments and agencies that you’re cutting back. And coronavirus has certainly had its challenges.” 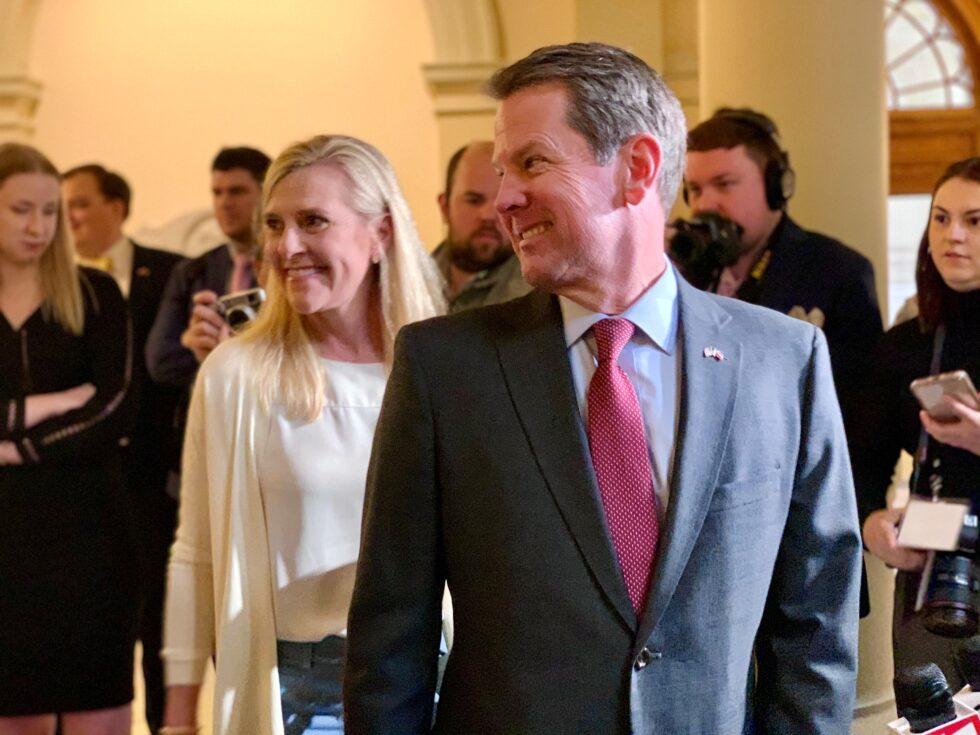 Gov. Brian Kemp and first lady Marty Kemp are on hand U.S. Sen. David Perdue speaks at the State Capitol for the first day of qualifying for the 2020 election on March 2, 2020.

Kemp attracted huge criticism early in the COVID-19 pandemic by imposing a stay-at-home order later than other states, then by ending that order and moving to reopen businesses before other states – all while refusing to mandate that Georgians wear masks for guarding against the airborne virus.

The governor’s mantra to “protect lives and livelihoods” soured many people in Georgia who viewed his actions as more beneficial to businesses than the general public’s health, as did his lawsuit against Atlanta city officials to block them from imposing their own local mask mandate, said Alexis Scott, a former journalist and Democratic political commentator.

“Most people I know are not happy with his tenure,” Scott said in a recent interview. “Not just because of coronavirus, but primarily because of that.”

Then protests broke out over racial injustice during summer in Atlanta and across the country after the police killing of George Floyd, as well as resurfaced anger over the February 2020 slaying of Ahmaud Arbery near Brunswick. Kemp chastised the protesters for allowing violence and property destruction in their ranks, then readied the Georgia National Guard to respond.

Scott, who published Atlanta’s oldest Black newspaper for 17 years, charged Kemp with largely skirting issues that matter most for minority communities like social justice, creating the perception of a careless attitude that she thinks could bite him in an expected rematch with Abrams in the 2022 election.

“He wants to please his white constituents, so he doesn’t have anything to say about people of color because there are still more of them than us,” Scott said. “I think he’s trying to stay away from it because he knows it’s a hot iron. Everything that could hurt him is going to come back.” 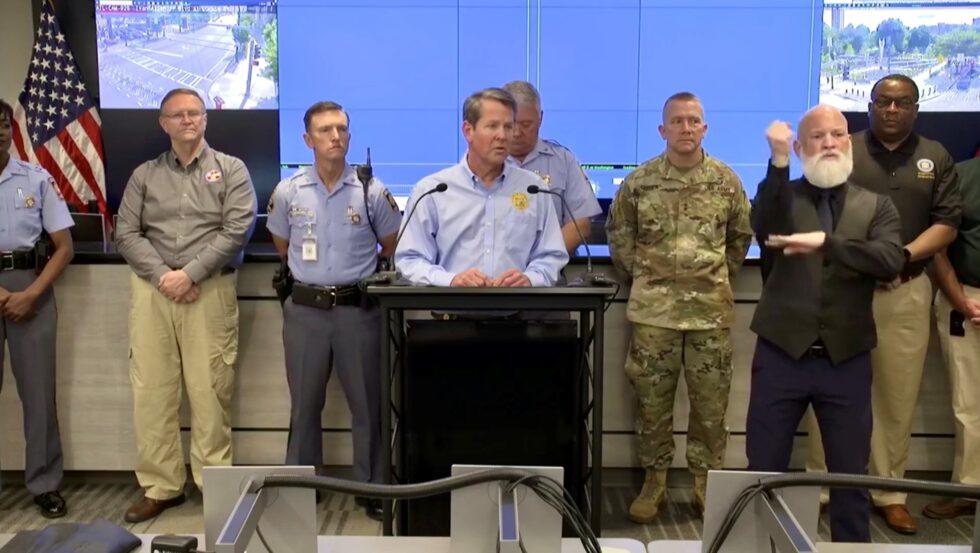 Gov. Brian Kemp discusses the state’s response to protests over police brutality and racial injustice at the State Operations Center in Atlanta on June 2, 2020.

But while opponents call him divisive, Kemp’s supporters see the governor as a person of character and conviction who has been forced to make unpopular decisions during unusually difficult times.

In particular, Kemp’s backers see his decision to let businesses stay open when other governors have kept their states shuttered as a wise move that spared Georgia from more crippling economic impacts seen elsewhere.

“He got the crap knocked out of him for stepping forward and reopening our economy before any other governor did,” said Brian Robinson, a top deputy for former Gov. Nathan Deal and Republican political commentator. “He made a decision, he stuck with it and he was right. And Georgia is better off for it.”

While Georgia’s unemployment rate is still high at 5.7%, revenues have climbed since summer with businesses allowed to stay open, and Kemp is now set for a legislative session where he likely will not have to ask for more budget cuts, Robinson said.

The same tendency to resist the sway of popular opinion has also helped Kemp weather assaults from his own party after the Nov. 3 presidential election, which Trump lost by fewer than 12,000 votes in Georgia. Most recently, the president called on Kemp to resign for not stepping in to overturn the results, a move the governor dismissed as a “distraction.”

“You may disagree with his conclusions or his actions,” Robinson said of Kemp. “But he’s thoughtful. And once he makes a decision, by God, it’s carved in Stone Mountain. It’s not going to move.” 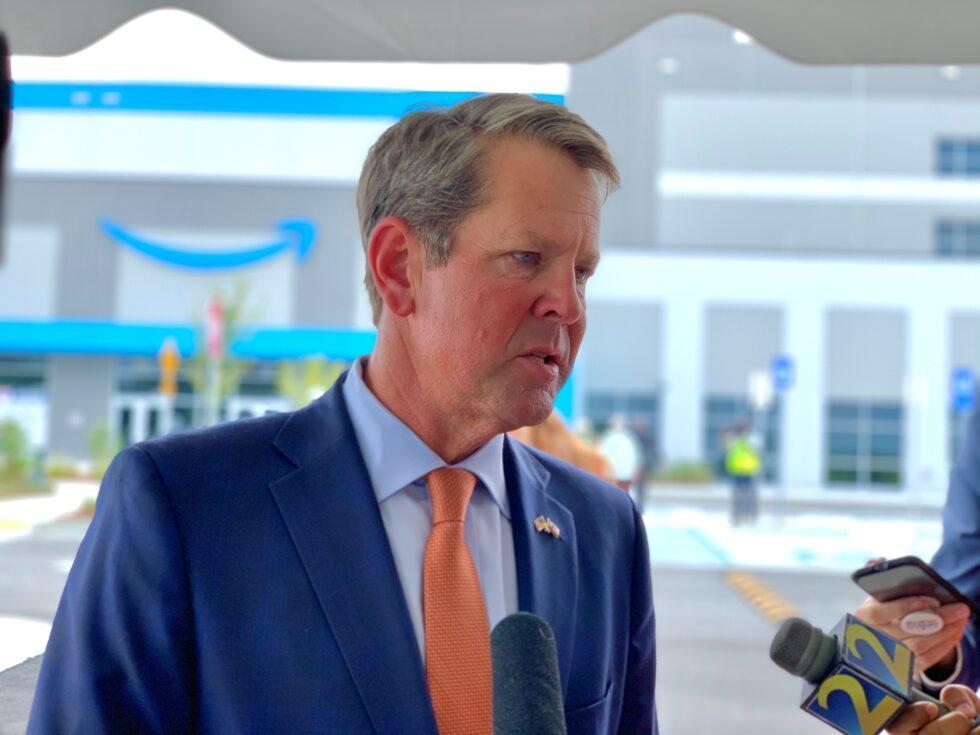 Kemp has tried to toe the line between shrugging off the president’s attacks and rallying Republican support for U.S. Sen. Kelly Loeffler, whom the governor appointed late last year to hold retired U.S. Sen. Johnny Isakson’s seat until a special election.

Loeffler fended off a challenge in November from outgoing U.S. Rep. Doug Collins, a Trump ally whom Kemp passed over for the appointment, to join fellow Republican U.S. Sen. David Perdue in the Jan. 5 runoff elections against Democratic contenders Jon Ossoff and the Rev. Raphael Warnock.

On the one hand, the fallout from Trump’s continuing attacks on a governor he once helped lift to victory has taken a toll on Kemp, who may struggle to patch up relations with loyal Trump voters in Georgia if he draws a Republican primary opponent in his bid for reelection in 2022, said UGA’s Bullock.

“What will be critical for his reelection will be to have a united Republican party,” Bullock said. “And that may be the biggest challenge over the next two years: to knit the party back.”

On the other hand, anger over Trump’s loss could weaken before voters cast ballots in 2022, leaving Kemp to run largely on how well he handles distributing COVID-19 vaccines over the next year as he seeks to overcome Democratic enthusiasm from the 2020 presidential election, which a Democratic candidate won for the first time since 1992, said Emory’s Gillespie. 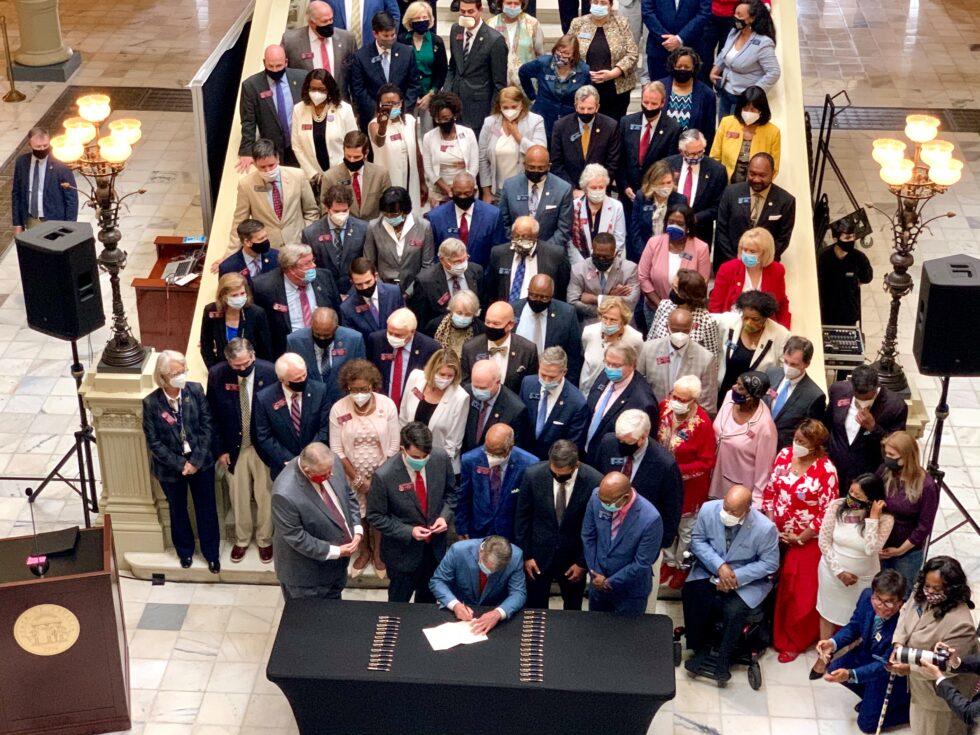 “Partisanship is probably going to be a much bigger predictor of how Georgians vote [in 2022],” Gillespie said. “Everybody’s going to prepare for that margin to be razor-thin like it was this time, and Stacey Abrams is not a novice candidate. She is pretty battle-tested.”

For his part, Kemp says he’s not looking as far down the road as 2022 yet, though he did confirm that he will run for reelection. Top of the governor’s mind for now is to oversee delivery of COVID-19 vaccines. While vaccines began shipping out to Georgia hospitals and nursing homes in recent weeks, there are likely months to go before the general public will have access.

Beyond politics and posturing, Kemp said he’s just focused on preparing to manage the inevitable hiccups that will come from distributing the millions of vaccine doses needed for Georgia to finally end the COVID-19 pandemic.

“Between now and herd immunity, our focus is going to be on the virus and on the economy and keeping people safe in Georgia,” Kemp said. “That is all I’m worried about right now.” 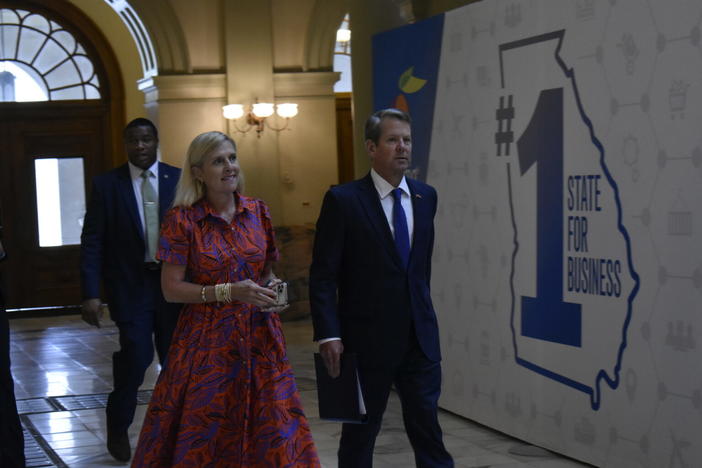 Georgia Gov. Brian Kemp signed an executive order Thursday aimed at preventing local governments from imposing COVID-19 restrictions such as mask mandates or vaccine requirements. Under the new rule, businesses can voluntarily comply with local rules, but they cannot be forced to do so. 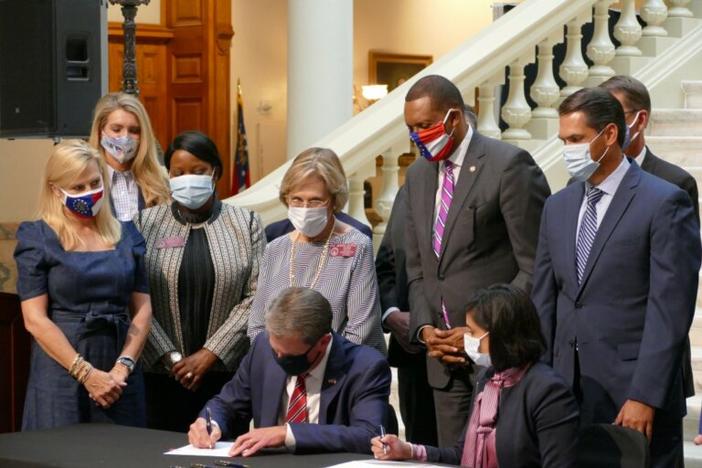 The Centers for Medicare and Medicaid Services sent a letter to Kemp Thursday saying part of this second waiver plan “requires further evaluation” and requesting updated analysis by early next month. The state’s response will then be subjected to a 30-day comment period. 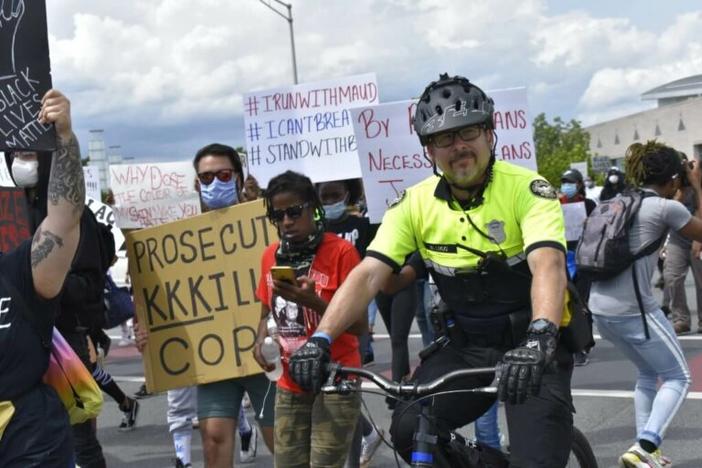 Decision Time For Police Funding And Other Law And Order Legislation

Gov. Brian Kemp is set to sign a controversial bill to block local governments from slashing police budgets Friday as a Monday deadline looms for him to sign, veto or get out of the way of legislation passed in 2021.