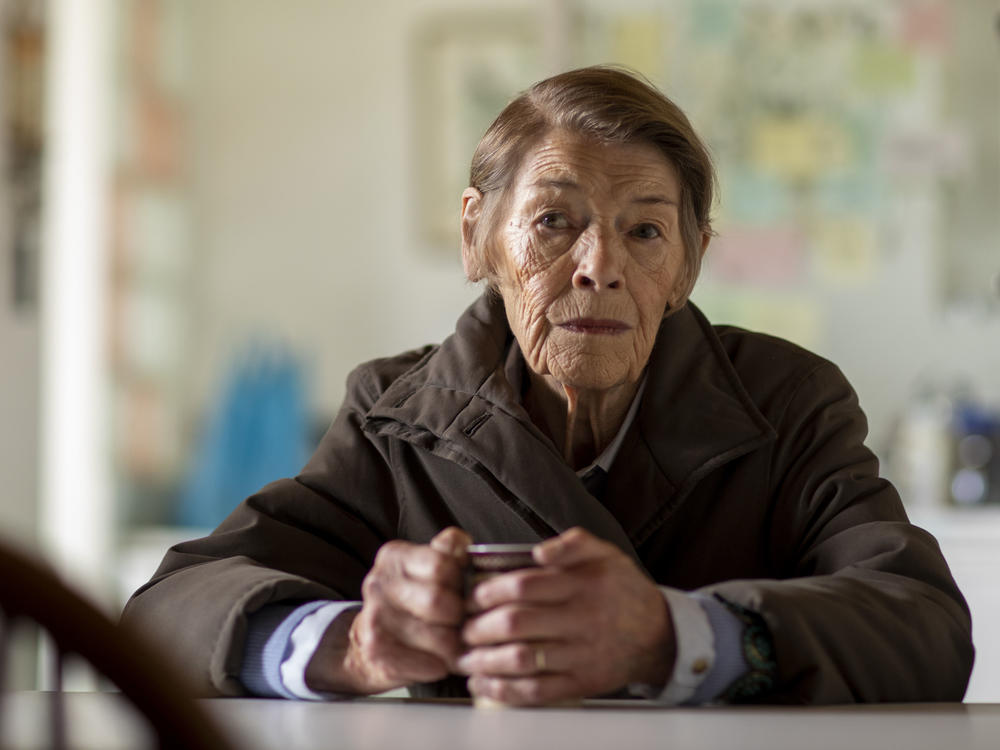 Caption
Maud (Glenda Jackson) is haunted by two mysteries in the television film Elizabeth is Missing, based on a novel by Emma Healey.

A new PBS Masterpiece psychological thriller stars Glenda Jackson as a woman desperately trying to solve two mysteries — even as her own grasp of reality is slipping away.

This is FRESH AIR. The new psychological thriller "Elizabeth Is Missing" stars Glenda Jackson making her first TV appearance in nearly three decades. In the film, she plays a woman with Alzheimer's trying to track down a missing friend. It airs on PBS' "Masterpiece" on Sunday. Our critic-at-large John Powers says it's worth seeing simply for Jackson alone.

JOHN POWERS, BYLINE: Although growing old is the most common of experiences, there are surprisingly few good films about old age, maybe because there's no audience. The young are too busy being young to be interested in those with gray hair. As for people over 50 - at least the ones I know - they shudder at the thought of watching comedies about cute bucket listers or dramas where the aged spend their days grappling with disease, death and loss.

My own heart sank when I first heard about "Elizabeth Is Missing," a new television film on PBS' "Masterpiece" that stars Glenda Jackson as a woman battling dementia. Even when a hypercritical London friend told me I should watch, I remember thinking, sure, if I live to be a million. But somehow, I wound up with time on my hands. And guess what? "Elizabeth Is Missing" was not what I feared.

Based on a novel by Emma Healey, this BBC production is a strangely cockeyed psychological thriller, a disease-of-the-week movie crossed with "Memento." Jackson plays Maud, a proud woman whose grasp of reality is slipping away. Post-it notes line her walls and pockets to remind her of everything. If she feels bound to anyone, it's her friend Elizabeth, with whom she likes to garden.

One day, Elizabeth doesn't turn up for their meeting at the local thrift shop. Maud is beside herself. Elizabeth has vanished, yet no one else seems fussed by this - not Maud's beleaguered daughter, Helen, who looks after her mum and gets little kindness in return; not the local police; not even Elizabeth's son, whose dark nature scared his mother.

As Maud tries to trace Elizabeth's movements, she plunges down the rabbit hole of memory. She keeps recalling - no, make that reliving - the great trauma of her teenage years, the unexplained disappearance of her stylish older sister Sukey. As these two time periods merge in her head, Maud must solve two mysteries - what happened to Sukey decades ago, and what has happened to Elizabeth now? Meanwhile, she keeps forgetting the basic facts of everyday life and then pretending she hasn't. Here, after Elizabeth has missed their rendezvous, Maud walks into the Salvation Army store where she'd once worked.

(SOUNDBITE OF FILM, “ELIZABETH IS MISSING”)

UNIDENTIFIED ACTOR #5: (As character) Oh, Maud. It's you. Hello.

GLENDA JACKSON: (As Maud) I've been outside for ages waiting on Elizabeth. She's late.

UNIDENTIFIED ACTOR #5: (As character) You sure you've got the right time?

JACKSON: (As Maud) What time is it?

UNIDENTIFIED ACTOR #5: (As character) Twenty past 10.

UNIDENTIFIED ACTOR #5: (As character) Where are you going?

JACKSON: (As Maud) I was going to make a cup of tea while I'm waiting.

UNIDENTIFIED ACTOR #5: (As character) Now, Maud, I thought we decided you weren't to do that. You don't work here anymore. Remember?

JACKSON: (As Maud) Oh, of course I remember.

POWERS: Of course, she doesn't remember. Now, while it's terrible to have Alzheimer's, if you're an older actor, it's great to play. When you're young, you can do Hamlet or Hedda Gabler or Blanche DuBois. But aside from King Lear - whom Jackson actually played on stage in 2019 - most roles for the old aren't very juicy or challenging. Playing dementia is. You get to inhabit blurring layers of consciousness, get to slide from warmth to abusiveness to humor at warp speed, and you get to register how it feels to have reality suddenly drop away beneath you like a trapdoor.

Jackson's performance, which has already won the International Emmy and a BAFTA award, elevates the film. With her trudging walk and features that veer between slack confusion and ferocious certainty - flinty impatience is a Jackson trademark - her Maud has none of the decorous radiance that Julie Christie and Julianne Moore brought to their dementia films. Instead, like Anthony Hopkins' scorching turn in the upcoming film "The Father," the 84-year-old actress gives us a lost soul who, in trying to stay afloat in reality, becomes an exhausting, sometimes cruel burden. Both victim and victimizer, she hurts her daughter and everyone else who loves her.

What stops the show from being punishing is that Maud's dementia isn't the only story. "Elizabeth Is Missing" doesn't wallow in misery. Approaching dementia on the angle, it lets us see Maud's unlikely heroism as she struggles against her own declining faculties to find out the truth. It keeps us guessing about the fate of the missing women who haunt Maud's mind. And it makes us wonder if everything will tie together in the end.

The whole story does tie together - in truth, far too neatly. Yet I didn't mind, for such closure feels positively merciful. You see; the great thing about a mystery story is that you can solve its puzzle. With dementia, there's no solution.

GROSS: John Powers reviewed "Elizabeth Is Missing," which airs Sunday on PBS. After we take a short break, Clint Smith will read his poem about growing up and walking down streets named after Confederate generals. This is FRESH AIR. 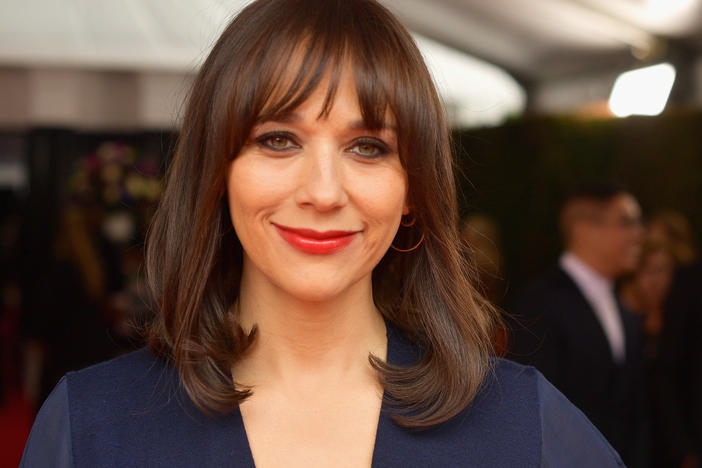 Rashida Jones On Becoming A Mom, Losing Her Mom, And The 'Big Chapters' Of Life

Jones filmed On the Rocks shortly after her son's birth and her mother's death. She nearly turned down the role, and is glad she didn't. "This movie was kind of a salvation for me," she says. 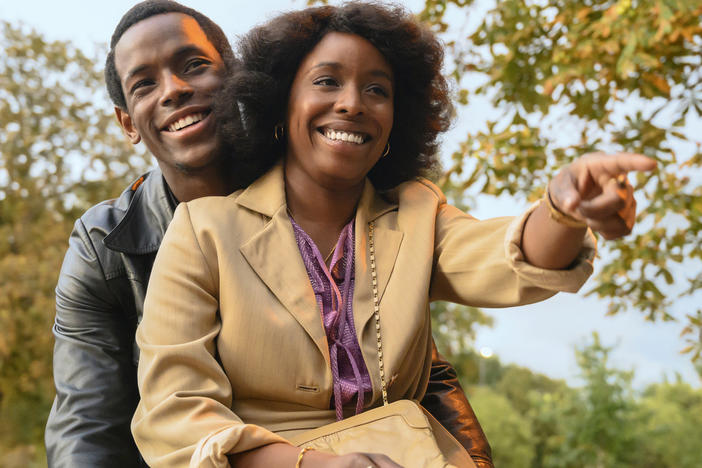 From Lovers Rock to The Good Lord Bird, the titles on John Powers' year-end list didn't simply distract; they also delved into enduring questions of freedom, dignity and survival. 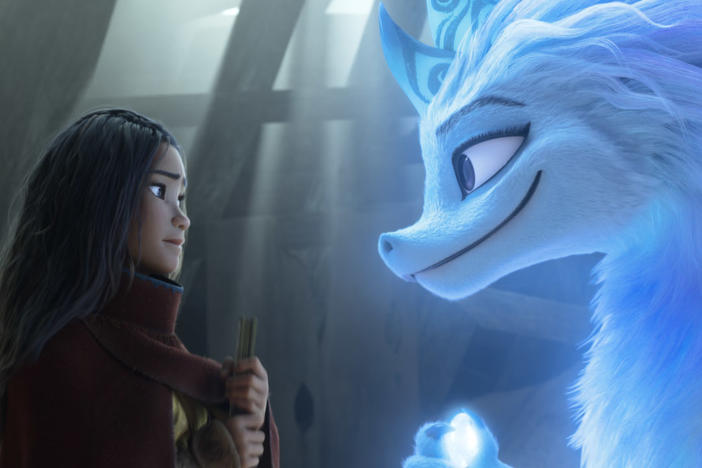 'Raya And The Last Dragon' Is Not Entirely New, But It's Refreshing Nonetheless

Disney's first animated film to feature Southeast Asian characters follows a young girl's quest to recover the pieces of a magical jewel. The film has an emotional power that sneaks up on you.