Late last week The New York Times gave back a Peabody Award and a Pulitzer Prize finalist citation. This was after the paper retracted the core of its hit podcast series "Caliphate." But in trying to restore faith in its journalism, the Times may be demonstrating the persistence of some problems at the heart of this scandal. A Times star audio host is trying to help correct course and also do damage control on the controversy. Here's NPR media correspondent David Folkenflik.

DAVID FOLKENFLIK, BYLINE: Last Friday The New York Times posted an unusual 30-minute podcast about journalism - its own. Michael Barbaro, host of the Times' podcast "The Daily," was tackling an uncomfortable topic with executive editor Dean Baquet on behalf of the paper's listeners and readers.

MICHAEL BARBARO: And I just want to...

BARBARO: ...Understand what you think happened. And were we duped? Were we tricked? Why that word?

BAQUET: In fact, duped might not be the best word because dupe implied that we didn't do anything wrong.

FOLKENFLIK: They were talking about "Caliphate," a podcast series about ISIS and terrorism that kicked off in spring of 2018. "Caliphate" focused greatly on a young Canadian Pakistani who claimed to have been an executioner for ISIS in Syria. He was the main character of the series despite red flags he was lying. When I spoke to Baquet last week, he said "Caliphate" host Rukmini Callimachi's faith in her story and her subject overrode warnings from colleagues.

BAQUET: She's a powerful reporter who we imbued with a great deal of power and authority. She was regarded at that moment as - you know, as big a deal ISIS reporter as there was in the world. And there's no question that that was one of the driving forces of the story.

FOLKENFLIK: Baquet told NPR that newsroom leaders did not subject the series to sufficient scrutiny because they were not used to editing audio with the same rigor they apply to print reporting.

BAQUET: Because this was a different form, people like me and some of my top deputies didn't feel as comfortable. And that's why it fell through the cracks.

FOLKENFLIK: This fall, after Canadian authorities filed federal charges saying the man who had claimed to be an ISIS executioner had lied about it, a different team of Times journalists did an investigation. In a front-page story, they reported they found no evidence the man killed anyone, joined ISIS or even ever traveled to Syria. In other words, the narrative propelling "Caliphate" collapsed. On his corrective podcast, however, Barbaro did not disclose several key facts about his own connection to the discredited "Caliphate" series.

BARBARO: From The New York Times and the team that brought you "The Daily," this is "Caliphate."

FOLKENFLIK: That's what Barbaro said back in 2018, when "The Daily" ran the second episode of the new series as part of its own show. "The Daily" producer Andy Mills helped drive the sound and feel of the series. From the outset, he became Callimachi's on-air sidekick.

RUKMINI CALLIMACHI: How's this? It's OK?

Barbaro is one of the Times's most recognizable stars. The paper says more than 4 million listeners download "The Daily" each day. The podcast has won the paper new awards, subscribers and revenues, though this interview did not run in "The Daily's" feed. Off mic, Barbaro sought to do damage control for "Caliphate," privately urging at least four prominent journalists on Friday to temper how they framed what happened. I know because I was one of them, as was an NPR colleague who used to cover conflict in the Middle East and the Washington Post media critic Erik Wemple, whom Barbaro warned was wrong to call the Times' walk-back a retraction. Here's Erik Wemple.

ERIK WEMPLE: I happen to believe that, in this instance, that it is a sign of The New York Times' integrity that they took this step and that they should embrace that they retracted it instead of sort of, like, tiptoeing around.

FOLKENFLIK: Barbaro declined to comment for this story. It struck Wemple as a problem that the Times assigned Barbaro to interview Baquet about a scandal that he had such close ties to.

WEMPLE: I think it's disqualifying and is certainly, certainly blinding, you know? I don't think Michael should have been involved in - you know, in this particular aspect of it. But he is the voice of The New York Times.

FOLKENFLIK: Plenty of others at the Times could have pinch-hit - colleagues with rich experience in podcasting or broadcasting. In a statement, New York Times spokeswoman Danielle Rhoades-Ha says the paper is committed to applying the same journalistic rigor across all its platforms. The interview Michael Barbaro conducted with Dean Baquet, she wrote, served as an audio corrective that complemented its written findings. David Folkenflik, NPR News. Transcript provided by NPR, Copyright NPR. 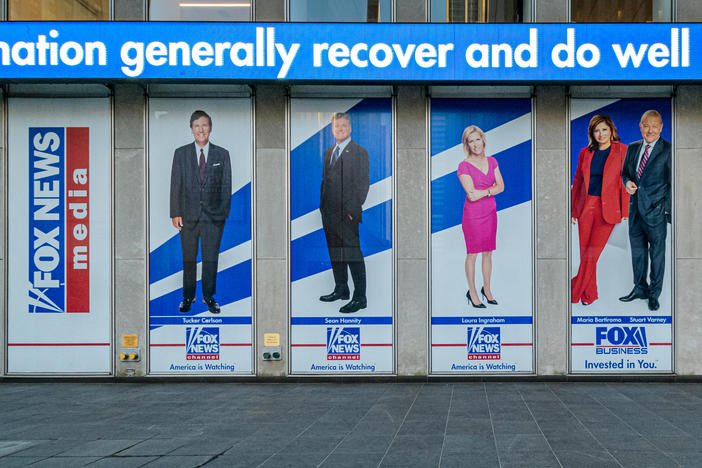