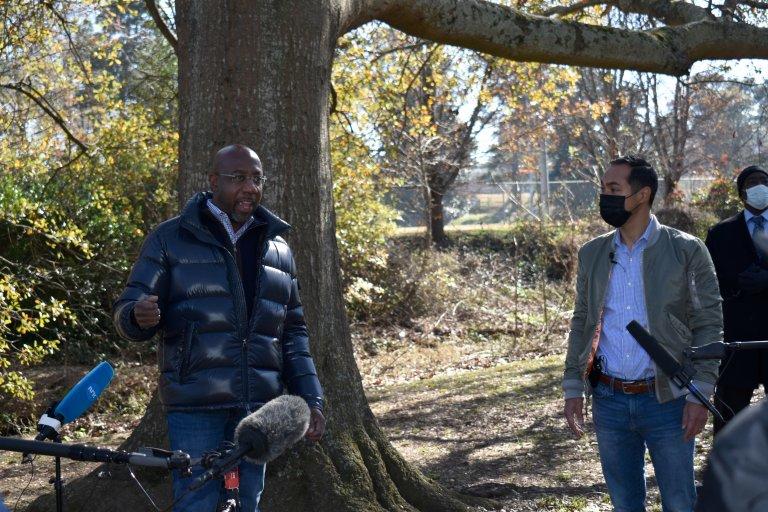 Rev. Raphael Warnock pitches to voters with former HUD Secretary Julian Castro at East Lake Park in Atlanta. Young and Latino Georgians could be decisive in the Jan. 5 Senate runoffs.

Castro, whose grandmother came to the United States from Mexico, is among the highest-profile Latino politicians in the country, and both parties are hoping to bring out ethnic and minority  voters in the Jan. 5 runoff election that could determine the Senate’s balance of power during President-elect Joe Biden’s first two years in office.

Latino voters in Georgia are finding themselves courted more than ever by both sides this year, said University of Georgia political science professor Charles Bullock.

“It shows just how high-profile these Senate races are in Georgia to have a leading Hispanic figure come here to campaign,” he said. “It’s probably never happened before. Both sides are going to be pulling out all the stops, they’re spending money at crazy rates, looking to get anything that can give them a bit of an edge.”

Georgia Latinos favored Biden in the November election with about 62% of the vote according to Washington Post exit polls, with men nearly evenly split and Latinas preferring Biden by a margin of nearly 70% to 30%.

Although Latinos still support Democratic candidates, there is some good news for Republicans. Only 52% of Latino Georgians said they supported Ossoff in the exit polls, compared with 43% who chose Perdue. And Trump increased his Latino support in Georgia by about 10% between 2016 and 2020.

Latinos make up about 7% of Georgia’s eligible voters and are increasingly a major force in statewide elections, said Duluth Democratic state Rep. Pedro Marin, who came to Georgia from Puerto Rico.

“When I got elected in 2002, there were roughly less than 20,000 Latino registered voters in Georgia,” he said. “Now there’s over 300,000 Latinos registered to vote in Georgia. I was just made aware that there’s 23,000 young Latinos that turned 18 before the election on Jan. 5, and they need to be registered.”

Speaking to a crowd of young supporters at East Lake Park in Atlanta Tuesday, Warnock pledged to support comprehensive immigration reform and a path to citizenship for immigrants in the Deferred Action for Childhood Arrivals program recipients, or so-called Dreamers, people who were brought to the U.S. without documentation as minors and are eligible to be shielded from deportation.

“You can count on me to be an ally, to make sure that we keep the promise that we made the Dreamers, and we certainly have got to push hard against the kind of cruelty that we’ve seen in recent news, children in cages, separated from their families. It is un-American, and it ought to shock the conscience of people of faith and people of moral bearing.”

Castro told the crowd his family’s immigration story demonstrates the American dream. Two generations after his grandmother’s arrival, she had a grandson serving in Congress and another in the president’s cabinet.

Ossoff and Warnock will help ensure American families have opportunities like that again, said Castro, who ran for president in the 2020 Democratic primary.

The average Latino voter is a millennial, said Jerry Gonzalez, CEO of the Georgia Association of Latino Elected Officials. Two-thirds are of Mexican descent. To the extent they share top issues, COVID-19 relief and immigration head the list.

Georgia Republicans are not conceding the Latino vote in the Senate runoff or in elections beyond. Some point to President Donald Trump’s popularity among Latinos in the 2020 election according to exit polls.

Latinos like Trump because he is a straight-talker who expanded the economy before the COVID-19 recession, said David Casas, a former GOP Georgia state representative and adviser for The Libre Initiative Action in Georgia, a conservative Latino political advocacy group supported in part by billionaire Charles Koch. Libre started in 2011. It’s now in 13 states, and Georgia is one of the newest.

Casas is hoping the shift is based on conservative ideals rather than Trump’s personal appeal, but that is still to be determined.

“We’re not going to know until we start looking at election cycles going forward, and Jan. 5 may be telltale as well,” he said. “Perdue, from 2014, did increase the Latino vote, but only by 1% over a six-year period. So it’s hard to tell whether that’s a trend, or was that carryover from Trump? Is it the Trump factor? Or is it the GOP message?”

“That’s one of the areas where Republicans could make major gains,” he said. “So far, Republicans have relied primarily on the white vote. Well, both in the state but also nationally, the share of votes being cast by whites is declining, and so long term and maybe not even that far in the distance, Republicans are going to have to be able to, if they’re going to retain the majority, pick up some votes from Hispanics.”

Latino voters tend to lean conservative on cultural issues like abortion, Bullock said, and those who fled left-wing dictatorships in central and South America may be receptive to conservative warnings that Democrats want to bring about socialism in the United States.

To be sure, Latino voters are not a monolithic group. But the shift toward Republicans in Georgia and other key swing states shows they will be open to a conservative economic message if someone is around to make it.

“The takeaway is you cannot take the community for granted,” Casas said. “Today, the vote may be with you, but tomorrow it may not be. The Democrats were able to experience that in this cycle, and Republicans also will need to wake up to that. Hispanics are the new demographic, the new electorate that is going to be listening to messaging and not just simply giving you a vote depending on whether there’s an 'R' or 'D' after your name. That just doesn’t matter anymore.”

On Monday, as the final day passed for Georgians to register to vote in the U.S. Senate runoff, Ossoff spent the day touring the state with Castro hoping to register young and Latino voters.

Castro went on the attack at a stop in Lilburn, repeating charges familiar to viewers of Ossoff and Warnock’s campaigns ads — that Loeffler and Perdue profited selling stocks on advance knowledge of the coronavirus and that they are out of touch with working class Georgians.

Ossoff reminisced about his mother, who immigrated to the U.S. from Australia and criticized Perdue for his support of the Trump administration’s immigration policies.

“Right now, we are represented by a man who believes that using federal dollars to rip babies from their mothers at the border is a good use of taxpayer dollars, but opposes basic economic relief for ordinary working people,” he said. “That’s not right. That’s not who we are as a people.”