Majority Of Muslims Voted For Biden, But Trump Got More Support Than He Did In 2016

Despite anti-Muslim rhetoric and policies, President Trump appears to have gotten more support from American Muslims in the 2020 election than four years ago.

The majority of American Muslims voted for Joe Biden, but there was a notable increase in support among Muslims for a president that many view as anti-Muslim. NPR's Leila Fadel reports.

LEILA FADEL, BYLINE: This year President Trump, who ran on this campaign promise in 2015...

PRESIDENT DONALD TRUMP: Donald J. Trump is calling for a total and complete shutdown of Muslims entering the United States.

FADEL: ...Got more, not less, support from American Muslims. The AP early exit polls showed that 35% of Muslim voters went with Trump. That's up from 2016. Polls and surveys from back then showed it was between 8 to 17%. Dalia Mogahed, the director of research at the Institute for Social Policy and Understanding, says she's not surprised based on a preelection poll ISPU did in the spring.

DALIA MOGAHED: Just from 2019 to 2020, the percentage of Muslims who increased their approval rating of the president had gone up significantly.

FADEL: And it wasn't income or education that predicted Muslim support. It was race.

MOGAHED: Identifying as white was the only predictive demographic variable.

FADEL: Fifty percent expressed support for Trump. Other trends among Trump-supporting Muslims that mirrored the general population - economy as a No. 1 issue, opposition to coalitions with Black Lives Matter and support for building coalitions with religious conservatives working on religious liberty issues.

MOGAHED: The other thing that I think surprised us the most was that Muslim Trump supporters, as well as Trump supporters in the general public, were more likely to express anti-Muslim sentiment.

FADEL: Bigoted, debunked tropes that Muslims are less civilized or more violent. Many assumed that Trump's anti-Muslim rhetoric and policies that were perceived as anti-Muslim, like the travel ban on mostly Muslim-majority countries, would chip away at support. About a quarter of Muslims typically lean Republican. But the support grew slightly for a variety of reasons, from single-issue voters to plain old political partisanship. Take Shahid Shafi. He's a surgeon in Southlake, Texas, and was the vice chair of the Tarrant County Republican Party until last year.

SHAHID SHAFI: I came of age in Pakistan under a brutal military dictatorship. And growing up in that environment, I saw the overreach of the government, how it can invade and take over every part of a person's life.

FADEL: From educational opportunities to even who you marry.

SHAFI: So what attracted me to the Republican Party was the concept of small government, lower taxes, fiscal responsibility, individual opportunities.

FADEL: Shafi wouldn't say who he chose for president. That's private. What he did say is, don't make assumptions. American Muslims...

SHAFI: Come with different values, and they vote for different reasons. And their reasons may not be any different than any other American's. You know, many people vote based on bread and butter, kitchen table issues.

FADEL: Emgage, a Muslim political advocacy organization, worked to turn out the vote. And Muslims were important to Biden's win in key states like Michigan. Wa'el Alzayat, the CEO, says, though, this year he saw a lot of misleading claims from social media personalities popular in some American Muslim communities.

WA'EL ALZAYAT: In the lead up to the election, you really saw a pretty intensive campaign to dissuade voters or at least remove their enthusiasm from voting for Biden without really much commentary on Trump's policies.

FADEL: Things like comparing Biden to a ham sandwich that a starving Muslim has to eat.

ALZAYAT: If you're trying to get a voter excited during a pandemic, you probably don't want to tell them that, well, it is like eating a ham sandwich if you're a Muslim. And rather than going hungry, go eat your ham sandwich. Well, I don't know about you, but I would rather starve.

FADEL: Alzayat says this kind of stuff was shared widely on texting apps like WhatsApp, another claim that a Biden-Harris administration would support the oppression of Muslims in India or Kashmir. Meanwhile, the same personalities were...

ALZAYAT: Remaining silent about Trump's pernicious, Islamophobic, racist policy of the last four years. And our assessment is that that really had the intended effect of either convincing some voters to vote for Trump or to convince them to stay at home.

FADEL: Alzayat warns, though, that polling on Muslims is pretty limited, and his organization plans to do more to understand how American Muslims really voted. Leila Fadel, NPR News.

(SOUNDBITE OF DAPHNI'S "LIFE'S WHAT YOU MAKE IT") Transcript provided by NPR, Copyright NPR. 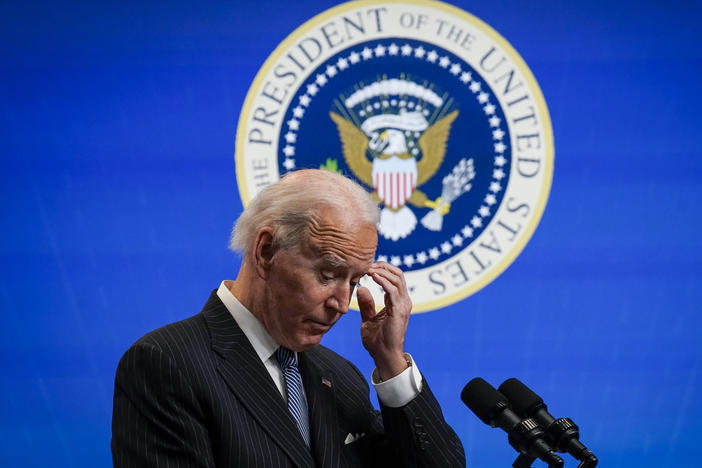 Despite Setting A New Tone, Biden Faces Tough Decision On Dealing With Congress

The president is pledging "unity," but the word means different things to different people. For him, it appears to be about tone, not necessarily direction.

Some officers are being investigated over involvement at the protests, while others fought off protesters who once supported them. 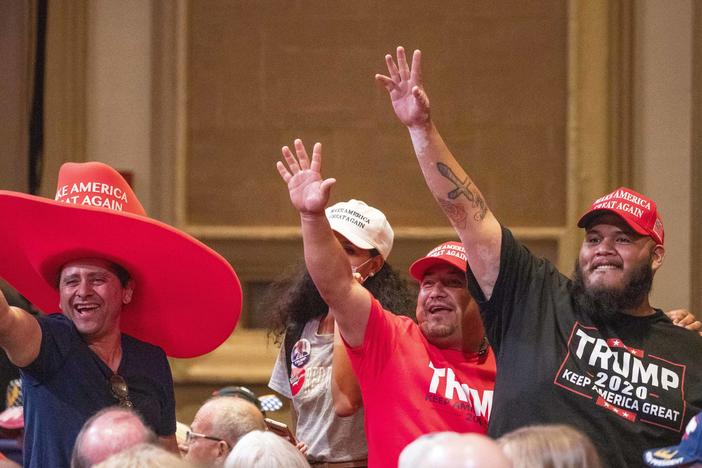 Many Latino Men Are Supporting President Trump This Election

The Latino vote will be key across the country, especially in tight races in places such as Arizona and Florida. About one quarter of Latinos, mostly men, steadily support the president, polls show.