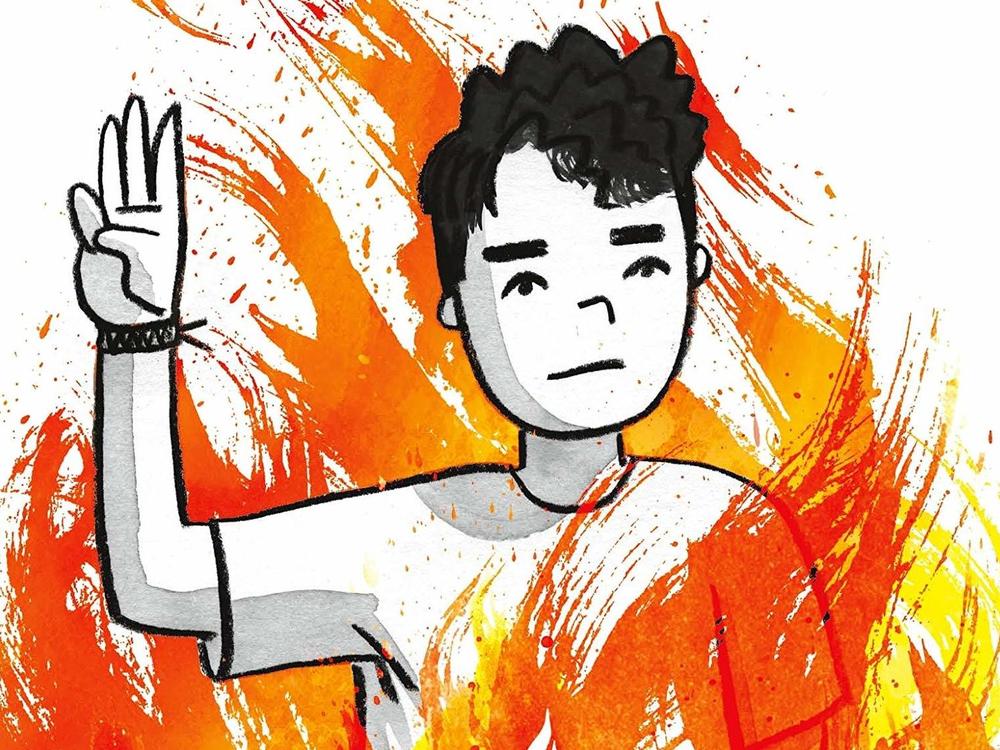 When my copy of Mike Curato's Flamer arrived, my first thought was, "I can't wait to read this book." My second thought was, "Oh my Lord, do teenaged boys really talk to each other like this?"

My husband assured me that yes, a thousand times yes, they really do.

So my third thought was, "Thank God I was never a teenage boy."

Being a teenaged boy looks hard. It looks brutish. It looks intimidating. It looks confusing. It looks vulgar. It looks, well, really uncomfortable. Not that being a teenage girl isn't all of those things too, but in my experience at least, there isn't nearly as much ... how shall I say it? How do I describe the absolutely unabashed preoccupation with body parts and functions and how that preoccupation is the lens for everything? WHAT IS IT?

Whatever IT is, Mike Curato knows it. He knows it like Judy Blume knows a teenaged girl, and that's quite a bit.

It turns out I do NOT know teenage boys, even though I have an older brother, and I am just now getting to know an almost-tween boy (my son). I thought I knew them, at least a little bit, I mean, Judy Blume did write Then Again, Maybe I Won't, and I have read it about one hundred times, but wow. You could fill Madison Square Garden with what I didn't know.

I know even less about what it is to be a 14-year-old Filipino American boy with body issues, who's also a Boy Scout, Catholic, and coming to terms with the fact that he is gay.

Oh, Aiden Navarro, how I wish I could give you a Smiths cassette.

Flamer, Mike Curato's first graphic novel, finds soon-to-be-high-schooler Aiden at Boy Scout camp, normally his safe place. It's a place of rules and regulations, predictability, peacefulness and quiet, a welcome respite from the chaos, anger, and abuse he experiences in his regular life at home and in his Catholic school. As Aiden says, "some of the guys tease me a bit but nothing nearly as bad as the jerks at St. Michael's."

Curato doesn't tell us how bad it was for Aiden at St. Michael's, but if there's one thing a lot of us know, it's just how bad middle school can be, no matter who you are. But this summer, Boy Scout camp is not what Aiden wants it to be.

You see, there are boys there.

Boys who especially use gay slurs to intimidate, hurt, and belittle each other.

There's no doubt that all those slurs and jokes, which slide off the other boys like water off a duck's back, hit Aiden where he is most sensitive. Aiden spends the majority of the book confused, tormented by his thoughts and feelings, desperate to deny that he is what his church tells him is wrong, and that the other boys back at St. Michaels and the other Scouts joke that he is. He is an altar boy; he can't be gay. Boys are terrible; he can't be gay.

I know I'm not gay. Gay boys like other boys. I HATE boys. They are mean and scary, and they're always destroying something or saying something dumb or both. We learned at school how bad homosexuality is. It's a sin. Gay people do bad things. And I'm not a bad person. I try to do good. All the time. So I couldn't be gay.

Aiden's road to self-acceptance is not an easy one, and his struggle to deny who he is comes to an abrupt halt when he develops feelings for his tentmate, Elias. Those feelings and the effort to suppress them lead Aiden to alienate his friends and succumb to self-hatred. Aiden's inner thoughts are hard to read, but are not unfamiliar, probably to most of us.

Mike Curato also illustrated Flamer, and it's his spread of Aiden, in black and white, cocooned in his sleeping bag, face hidden behind his hands, surrounded by red flames and a cacophony of self-hate, scribbled in blazing orange, that hit me like a punch in the stomach. There is no mistaking Aiden's utter despair and anguish. He's just so small on the page, so alone, so helpless; it's impossible not to feel it with him.

I've never been a Pollyanna. I've never been one to dismiss those dark feelings and say, oh, this too shall pass. In those dark moments, I know that it can feel like it doesn't even matter if it passes, that one moment itself is enough to make the thought of the next moment, no matter what it may be, unbearable. How one makes it through those moments and comes out the other side always seems like a miracle.

And so it is for Aiden.

Mike Curato does right by every kid or adult who has ever had those moments. There are no promises of rosy skies and sunflowers for Aiden, no redemptive story of bullies turning into pussycats. What Curato does give Aiden is much more valuable: hard knowledge and acceptance of himself, with pinpricks of light in the form of a thumbs up from a friend, a letter from a pen pal, and a moment of tranquility. What Curato gives Aiden is not a pithy storybook ending; there is no boyfriend waiting at the end of the rainbow, no magic way to deal with his parents or school, but there is endurance and hope. Aiden does not emerge from the flames unscathed, but he does emerge stronger and accepting of himself.

And that's the kind of teenage boy I like. 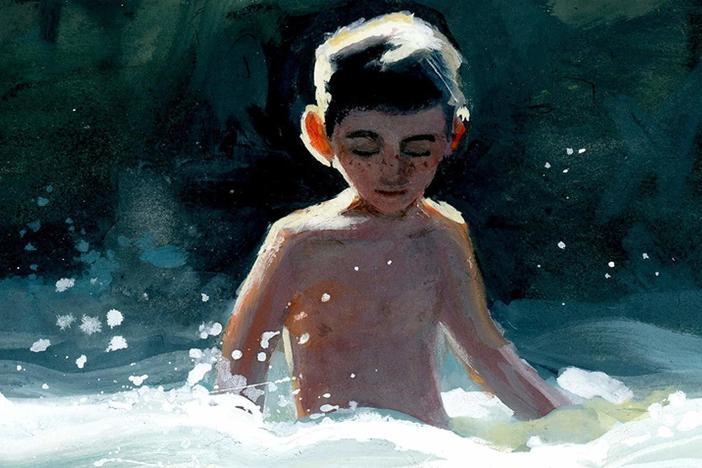 Jordan Scott is a poet, a master of words, and a stutterer. His new kids' book, gorgeously illustrated by Sydney Smith, chronicles his childhood journey towards coming to terms with his stutter. 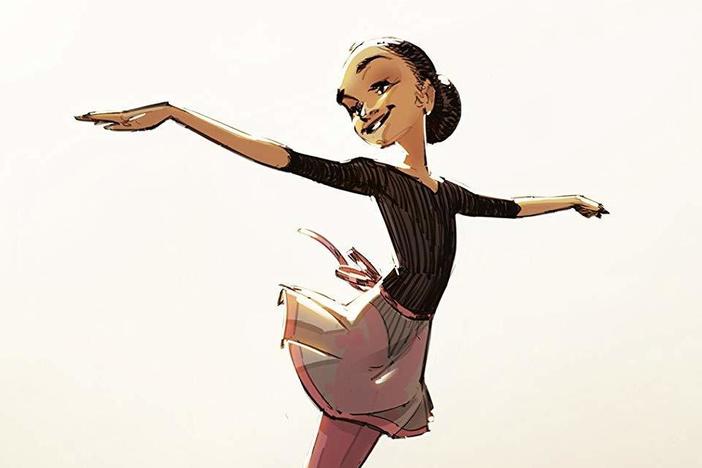 You Can't Send Your Kids To Dance Class Right Now, But You Can Read Them 'Bunheads'

Renowned ballerina Misty Copeland's new kids' book Bunheads draws on her own childhood experiences — if your kids love dance, it's just the thing to keep them going until classes come back. 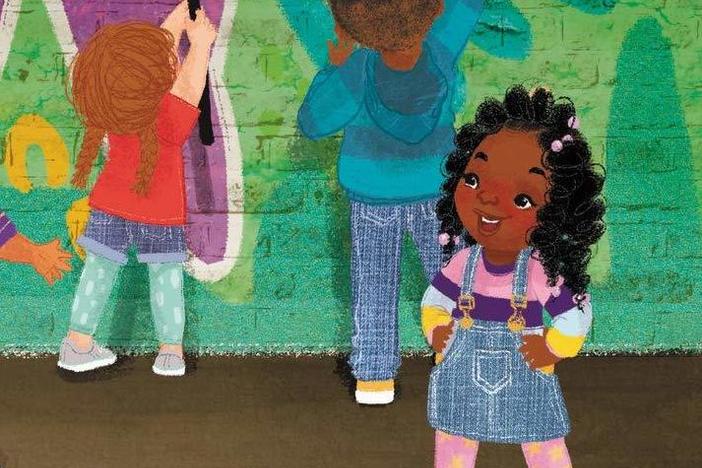 'I Promise' This Is A Message Book Your Kids Will Love