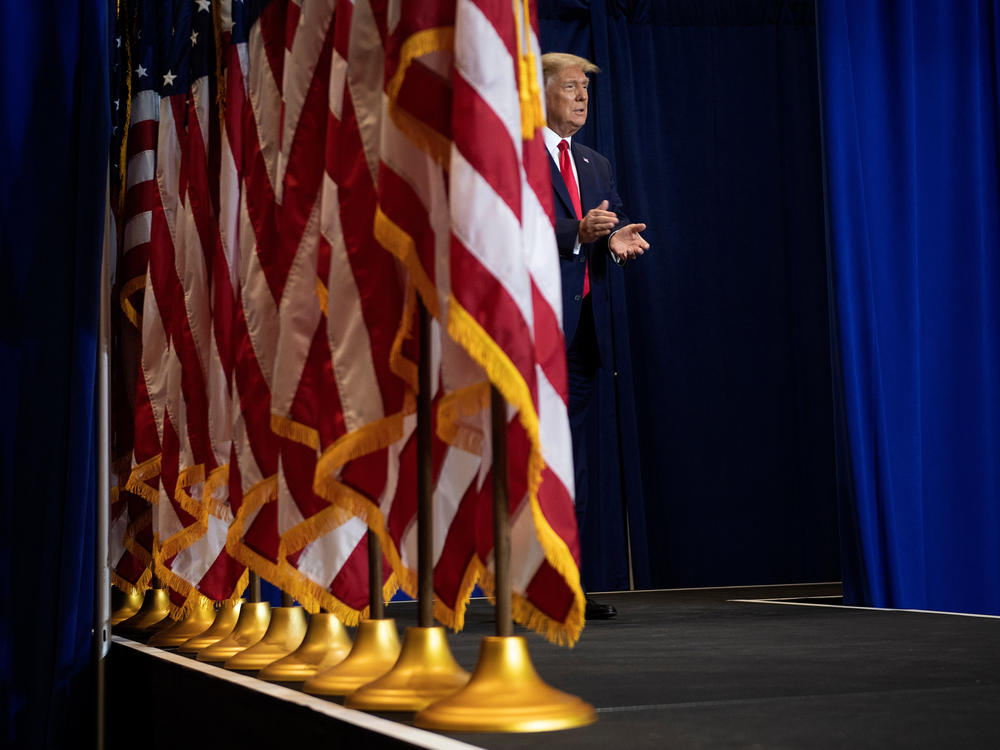 Caption
President Trump speaks to seniors in Ft. Myers, Florida, with a kinder, gentler message on the coronavirus.

President Trump tried out a new message for seniors on the campaign trail on Friday — an important bloc of voters who have given him poor marks for how he has handled the coronavirus.

Trump, who has consistently downplayed the threat and the impact of the pandemic, delivered his most empathetic speech to date in prepared remarks in Florida, a swing state critical to his frenzied home-stretch push for a second term in office.

"I'm working as hard as I can so you can kiss and hug your children and grandchildren very soon," Trump said. "That's something I've missed, also, I will be honest with you."

With just 18 days to go before the election, Trump and former Vice President Joe Biden are virtually tied in Florida, according to recent polls, with Biden gaining among crucial older voters, a demographic severely impacted by COVID-19.

Fernand Amandi, a pollster with Bendixen & Amandi International, called the president's speech in Florida a "radical shift" that reflects "a sign of panic" by the campaign. Amandi said Trump needs to win the senior vote in the state to have a shot at winning the White House.

"Trump typically loves to flaunt, as he would say, his own immunity to the virus and downplay anything that has to do with the virus," Amandi said. "As a reflection on what he would call his appropriate leadership. And this dramatic change in tone implies he scared. He's genuinely scared about losing this election." 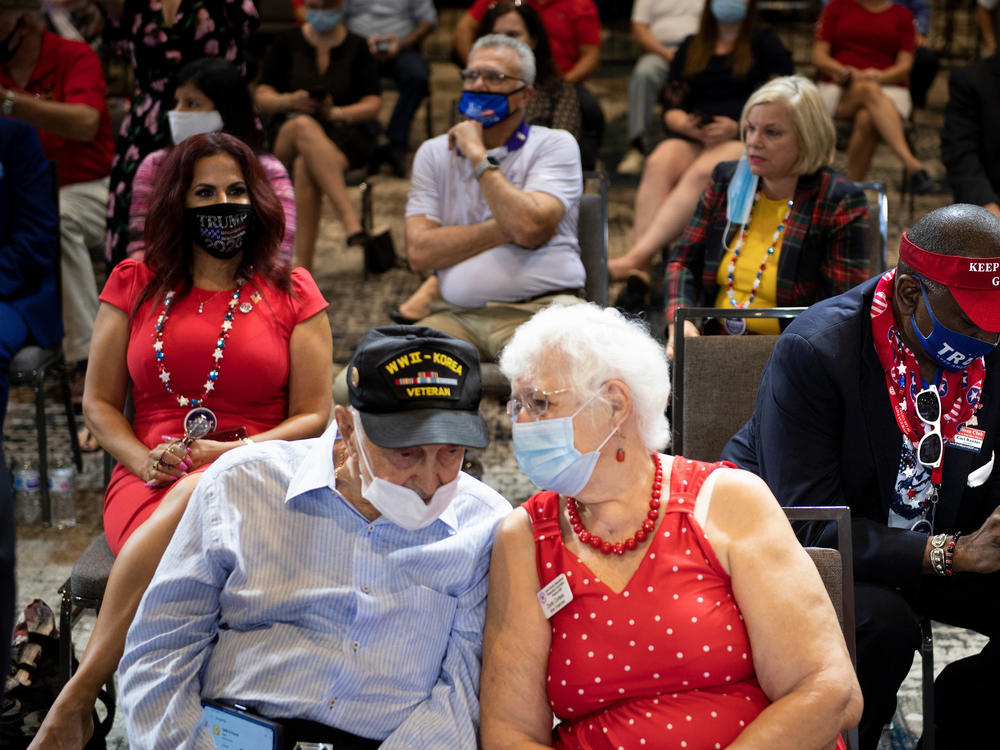 Caption
Supporters wait for PresidentTrump to speak on Friday at an event geared toward seniors.

Biden was in South Florida earlier this week, and attacked Trump for failing the biggest test of his presidency.

"While he throws super-spreader parties at the White House, where Republicans hug each other without concern of the consequences, how many of you have been unable to hug your grandkids in the last seven months?" Biden said.

Trump needs the support of Florida voters over the age of 65, who four years ago overwhelmingly supported him by a 17-point margin, according to exit polls. In contrasts, a recent survey by seniors' group AARP shows Trump and Biden virtually tied among seniors.

Earlier this week, Trump, 74, used his own recent experience with the virus to double down on his optimistic pitch that the United States is beating the pandemic, which has infected almost 8 million people and killed more than 215,000.

On Friday, he acknowledged that seniors "have borne the heaviest burden" of isolation, illness and grief during the pandemic. He said seniors would be first in line for new vaccines when they become available. It is possible that one or two vaccines could be available by year-end under emergency use authorization by the Food and Drug Administration, but frontline health care workers are expected to have initial access to the vaccines.

"I happen to be a senior," Trump said. "I will protect you. I will defend you and I will fight for you with every ounce of energy and conviction that I have."

Trump was criticized earlier this week for an image that many older Americans found offensive, tweeting a doctored image of Biden's face on a person in a wheelchair at a retirement home, with the caption "Biden for Resident."

And later on Friday, at a rally in Ocala, Trump was back to his chest-beating message about beating the virus and getting life back to normal, even calling his aide Hope Hicks — who also was sick with the virus in late September — up to the stage as evidence of how young people can bounce back from COVID-19. 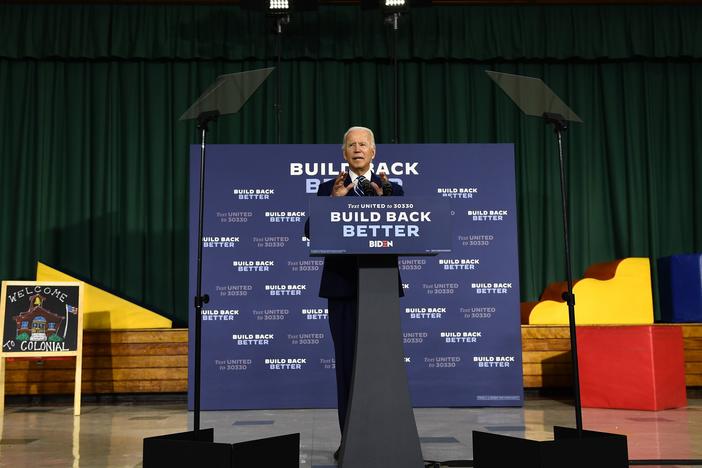 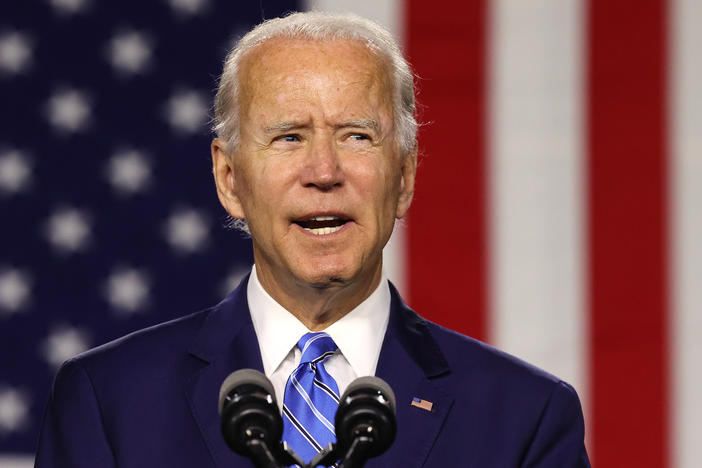 The Democratic presidential candidate calls on Congress to pass $30 billion in emergency funding for schools to acquire personal protective equipment, building upgrades and other remedies. 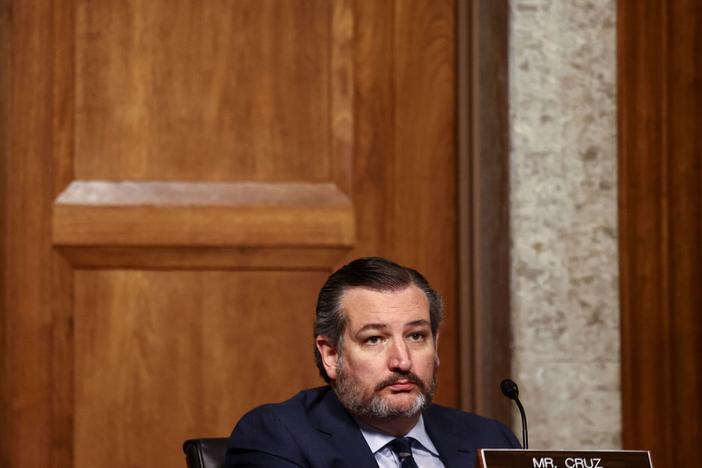 Dozens of Republicans in the House and Senate have said they will object to certification of the Electoral College results. Others say it's time to move on.