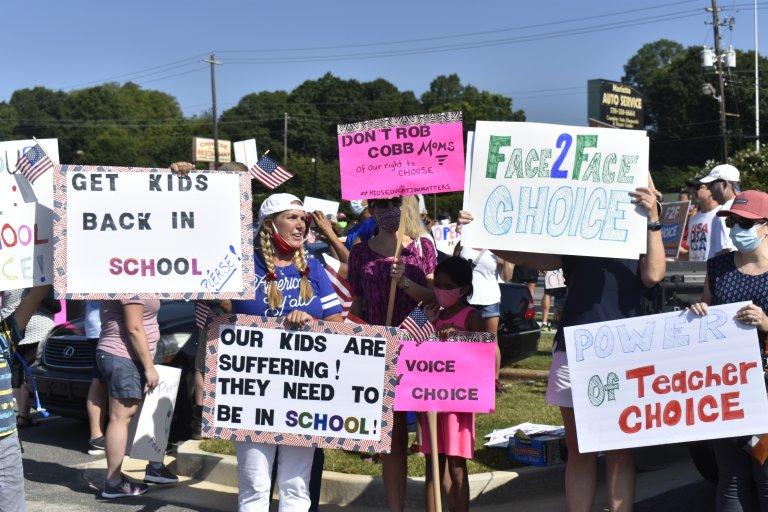 The fight over school reopenings continues as state and Paulding County officials face legal action over their safety measures. Over the summer, a group of Cobb parents organized protests over the district's virtual reopening.

Georgia officials did not do enough to keep children and teachers safe in opening school buildings during the COVID-19 pandemic, a teachers’ group alleges in a lawsuit filed Wednesday in Fulton County Superior Court.

The suit, filed by the Georgia Association of Educators and an anonymous Paulding County teacher and student, names Gov. Brian Kemp, Georgia Public Health Commissioner Dr. Kathleen Toomey, State Superintendent Richard Woods, Paulding County Superintendent Brian Otott and members of the Paulding County Board of Education. It alleges they created a public nuisance, failed to provide a safe workplace for school employees and violated the state Constitution by failing to provide access to an adequate public education.

“Georgia’s 1.8 million public school students deserve to be safe and healthy in all school settings. They should be in spaces that do not risk their health and by extension, the health of their family and friends,” said GAE President Lisa Morgan in a statement. “Decisions by some of our leaders have led to classroom and school environments that endanger our children. As an organization of educators, that goes against the very nature of who we are and what we do for our students every day. That is why today GAE, along with other plaintiffs, saw the need to file suit.”

A spokesman for the governor’s office and spokeswoman for the state health department declined to comment on the lawsuit.

The lawsuit alleges the state defendants “have steadfastly refused to issue meaningful, binding requirements for school districts concerning how they are expected to operate during the pandemic,” arguing that the directions issued for childcare facilities, gyms, bars and movie theaters is more stringent than that offered to schools, leaving decisions to the local school districts.

The Paulding County defendants have “used that freedom irresponsibly, failing to delay or provide alternatives to in-person instruction or to implement the most critical health and safety measures necessary before beginning any amount of in-person instruction,” the lawsuit charges.

The state education department and health department have issued detailed guidelines for school reopenings, said Superintendent Woods. He has encouraged districts to require masks through their dress codes.

“Unlike several states, Georgia schools retain the authority to remain fully virtual instead of being required to offer in-person instruction,” Woods said. “When publicly shared photos made it clear that there were issues with Paulding County Schools’ COVID-19 response, my staff reached out to the Paulding superintendent directly, and I issued a public statement making it clear this was not acceptable.”

The board has also advocated for Georgia teachers and schools against the push for high-stakes testing and measures that could force in-person instruction before schools are ready, Woods said.

“At the end of the day, the Georgia Constitution provides for the local control of public schools,” he said. “There is often a misconception that the State School Superintendent has unilateral authority over all operations of public schools, and that is simply not true. The GAE complaint is asking the Georgia Department of Education to exercise authority we do not have.”

Woods said he hopes the complaint can be resolved “in a manner that is in the best interests of all teachers and students in our state,” but he criticized the association for not coming to him with their concerns before filing suit.

“Respectfully, if GAE had reached out to me to sit down and seek solutions to common challenges, I would have done so – just as I have always done so – but they did not,” he said. “I have spent the first months of the school year visiting schools all over the state and speaking directly with teachers on the frontlines. I am always open to the feedback of our teachers and education organizations, but those conversations can’t take place if the first time I hear of a concern is in the pages of a lawsuit.”

Paulding County was at the center of the national debate over school reopenings in August when photographs of crowded class transitions and maskless students in North Paulding High School went viral online.

A student who shared some of the photos was briefly suspended, but her punishment was revoked after widespread public outcry. The school temporarily shut down later due to spreading COVID-19 cases.

The teacher pressing the lawsuit, who is referred to as M.J. in the complaint, says she received no formal training from the school district on COVID-19 prevention prior to the reopening of her school.

The student plaintiff, identified as R.J., is M.J.’s daughter. She has a compromised respiratory system but is not able to study virtually because of the rigorous classes she takes.

The student claims social distancing is not required by school administrators and a culture of no mask wearing exists inside the school.

Reaction to the news on social media was mixed, but many Paulding County parents reacted with messages of support for district leaders.

“I personally think that the Board of Education made the correct decision in getting the children back to school,” said Lisa Sandy, who has two children in the district. “The kids missed so much at the end of last year, and they needed to go back to school.”

Parents were given an option to keep their children in virtual school or send them into the schoolhouse, Sandy said, and the district has been working hard to meet the needs of both groups.

“I personally think all of the schools in Paulding have done very well with the virus,” she said. “High schools are a bit more difficult due to changing the classes but I also think they did very well even with the increase in cases at the beginning of the school year. We have to learn to live with this for now and we cannot close down school and hide every time we have a few cases.”

But other parents complain their schools reopened without proper safety precautions.

Paulding mom Rachel George said her son’s classes seem no different than any other year.

“My son is in elementary school, so he already had one teacher for all of his main courses,” she said. “He still goes to art, music, and P.E. outside of his normal classroom. Other than eating lunch in his room, there has been no change and no protections for his teachers. The teachers were overworked, underpaid, and undersupplied, and that truth still remains. School reopening did not give the protections we were promised.”