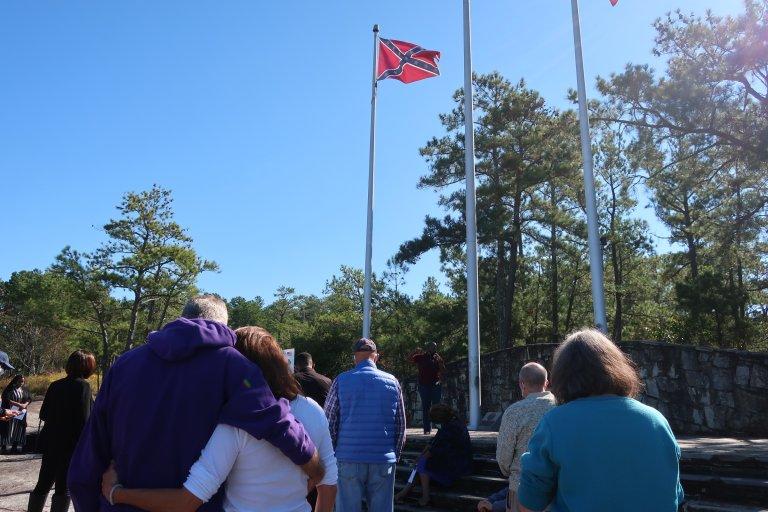 A "prayer for our park" event was held Tuesday as advocates press for the removal of Confederate flags from the park and other changes.

Flags of the Confederacy flapped in the occasional breeze Tuesday as a group prayed for change and healing at a state-owned park that is home to the nation’s largest Confederate memorial and a recent focus of civil unrest.

“We are going to unify DeKalb County, Stone Mountain, the state of Georgia, our nation under this issue,” said Meymoona Freeman, co-chair of the Stone Mountain Action Coalition, a new grassroots group advocating for a reimagining of a place where the modern Ku Klux Klan was born.

“This is a national issue. This is not just local. This is the granddaddy of all Confederate memorials, so we have work to do here because this has to be dealt with,” Freeman said.

The interfaith event, which featured about a half dozen faith leaders, was planned to coincide with a Stone Mountain Memorial Association board meeting, but that meeting was postponed a second time and is now set for Nov. 16. The board and governor’s office are reportedly working on a proposal, but no details have been publicly discussed.

The park’s Confederate iconography has continued to attract conflict, with heavily armed protesters demonstrating in July. When the park closed ahead of a white supremacist rally in August, protesters and counter protesters clashed in the city streets in nearby downtown Stone Mountain. City representatives attended Tuesday’s event.

As is, state law protects the massive carving of President Jefferson Davis and generals Robert E. Lee and Thomas “Stonewall” Jackson, who are horseback with their hats held over their hearts. Officially, the association is tasked in state law with maintaining “an appropriate and suitable memorial for the Confederacy.”

But the coalition is pushing the board to take action in other ways, like renaming streets honoring Confederate leaders and taking down the Confederate flags that greet those who sweat their way up the mountain. 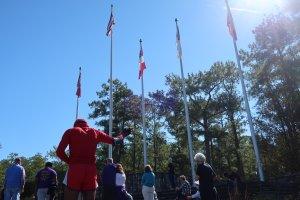 Raphael J. Holland (in red), who lives in Atlanta, participates in a “prayer for our park” event at Stone Mountain Park. Holland said he believes the Confederate flags should be removed from the park.

“It’s not about the flag. It’s what it symbolizes and it’s about our past,” said Atlanta resident Raphael J. Holland, who said he has been praying at the park every day as he exercises and has been following the coalition’s work.

“And so I’m like, ‘Lord, move in a direction to where things are ordained by you, that things are seen by you. So, when people come to this mountain, they see you and the goodness of you and allow people to continue to connect and feel connected to you in nature, in people,’” he said. “This is not a place of violence, and it just shatters my heart when people come here and protest on the negative.”

The coalition has not taken an official position on what should happen to the carving, which is the largest bas relief sculpture in the world.

“What we are trying to advocate for is the creation of some space for a dialogue around what should happen because something has to happen. We can’t continue to have it in this kind of triumphant position,” Ryan Gravel, an urban planner known for the BeltLine who is involved in the coalition, said after the prayer event Tuesday.

“The question of what is appropriate and suitable in the year 2020 is worth a new conversation,” he said.

Gravel, though, personally has some ideas. He said Tuesday that he thinks nature should be allowed to reclaim the mountainside and the dramatic memorial lawn, which he noted forces picnickers to take in a grand view of the Confederate memorial. The coalition has proposed halting any maintenance on the carving and lawn.

“There is no mistake of why Dr. Martin Luther King mentioned Stone Mountain,” Freeman said, referring to King’s “I have a dream” speech in Washington. “And we came here today because his dream became our dream. Our gathering here today is evidence that we will continue the work towards progress and healing this nation.” 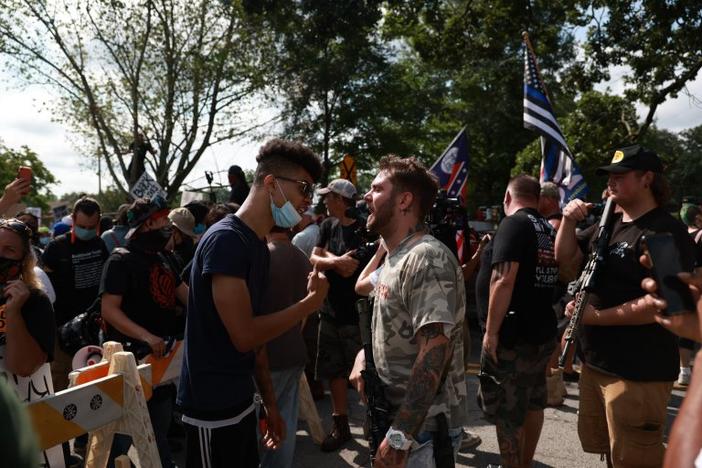 When Chandra Moye decided to open a local souvenir shop in downtown Stone Mountain, she had a decision to make: Would she sell items depicting the popular state park’s famous carving commemorating three Confederate leaders?

Ultimately, the Black business owner kept carving-themed merchandise off her shelves when she launched in March because of what she saw as her corporate responsibility to the community. 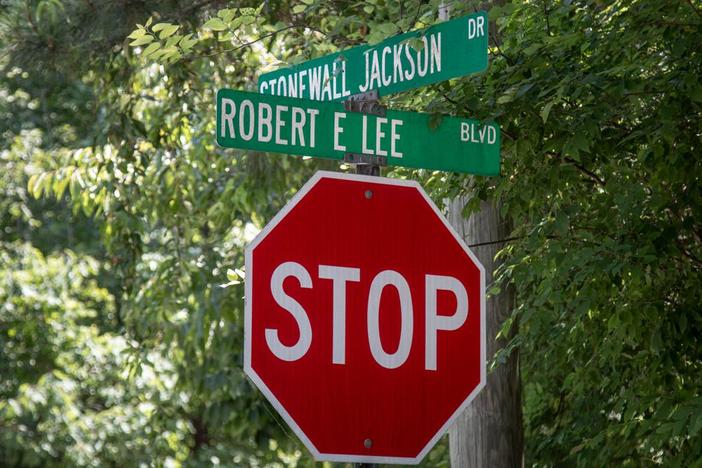 Stone Mountain’s massive monument featuring Confederate leaders has long sparked controversy. Now, the Stone Mountain Memorial Association has announced changes to the park it hopes will help tell a more "balanced" story of Georgia's past. The latest Georgia Today podcast with host Steve Fennessy and guest Tyler Estep, a reporter at the Atlanta Journal-Constitution, examines the park’s history and what the future of its Confederate memorial may look like. 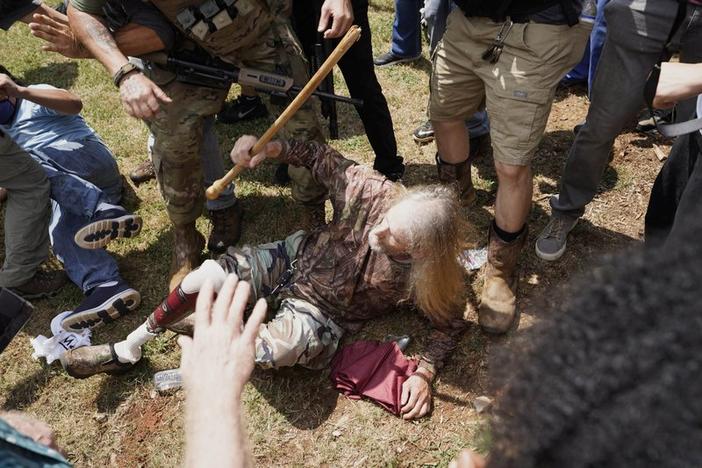 Police Move In After Protesters Clash In Stone Mountain

Several dozen right-wing demonstrators, some waving the Confederate battle flag and many wearing military gear, gathered in downtown Stone Mountain where they faced off against a few hundred counterprotesters, Police then moved in.