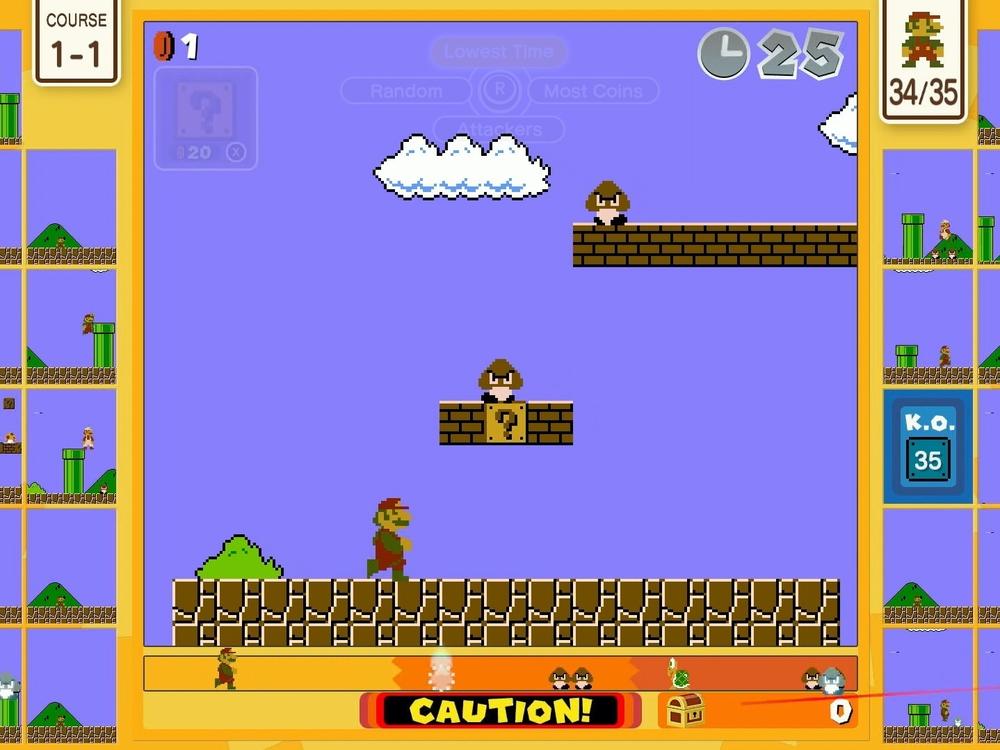 In early 2019, game developer and Youtuber Infernoplus had an idea — what if he took a classic video game and gave it a contemporary twist?

That game was the original Super Mario Bros for the Nintendo Entertainment System, and to lend it a modern touch, Infernoplus — who prefers to go by his online username — wanted to turn it into a Fortnite-inspired "battle royale" game. "I had kind of jokingly said at the time you can make anything into a battle royale," he tells NPR. "Every single game publisher in the world wanted to make one at that particular moment."

The battle royale genre sees a large number of players compete against one another to be the last player standing.

Using some code borrowed from a prior game design project, Infernoplus got to work. He designed a map-editing tool that allowed him to painstakingly re-create the original Super Mario Bros. levels. Then, he built a multi-player system that supported a lot of players at once — even though he didn't expect the presence of "too many players" to be a problem.

The project was called Super Mario Royale, and within a month of its original inception it was finished and released to the world on Infernoplus' personal website. The morning after its release, the game had nearly a thousand active players. Soon after, major blogs like Kotaku and Vice were writing about the game.

But about two weeks after the initial release, Infernoplus received an email from Nintendo's lawyers. "They said: 'take this down, it's infringing on our copyright, we don't like this,'" Infernoplus shares.

So he reworked the game, removing all of the Nintendo assets and replacing them with custom art and music. He called the new game DMCA Royale. 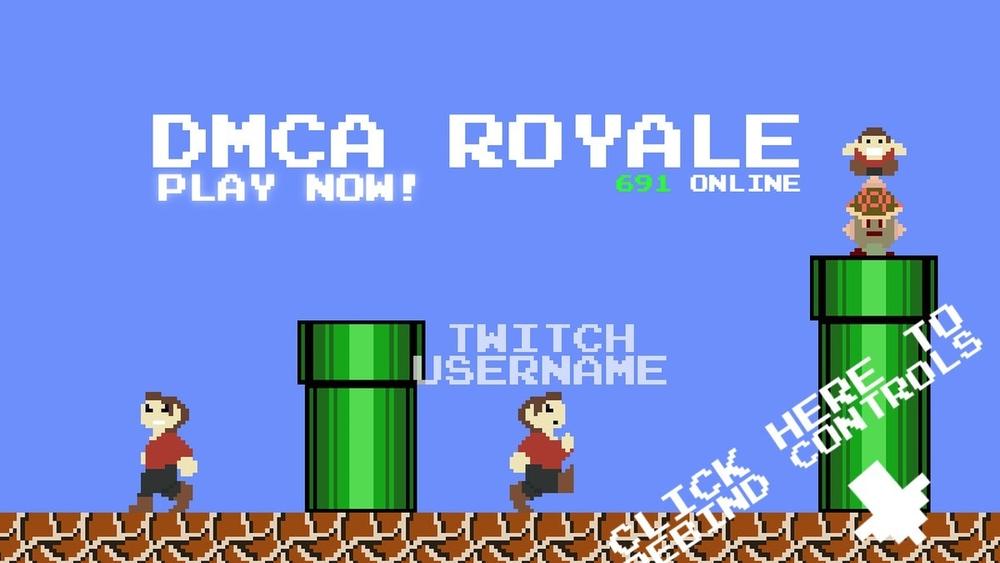 But even with those changes, Nintendo didn't budge. They still wanted the game gone. Fearing a lawsuit, Infernoplus decided it was easier to take the game down than fight a costly legal battle. "I don't have buckets of cash to throw away on something like that," he says.

This year marks the 35th anniversary of Super Mario Bros. To celebrate, Nintendo has released a collection of games called Super Mario 3D All-Stars. It compiles several acclaimed and influential games from the series, including the award-winning Super Mario Galaxy and the often maligned but underrated Super Mario Sunshine.

Nintendo is one of the biggest video game companies in the world. From Mario to Zelda to Donkey Kong, Nintendo has built a catalogue featuring many of the most recognizable figures in gaming.

It is also a company that has made these characters central to their profit margin. Before all else, Nintendo remains a gaming company. While competitors like Sony and Microsoft continue to roll out gaming consoles that also function as do-it-all entertainment systems, Nintendo positions high-quality software with recognizable mascots as the selling point of its systems. This combination of brand continuity and prestige software has made for a deeply passionate and multi-generational fanbase.

As with all things beloved, there is a passionate community of Nintendo fans who make their own stories and experiences derived from Nintendo's intellectual property. In other words: fan fiction. Unlike traditional fan fiction though, many Nintendo fan projects take the shape of playable software in the form of standalone games, or modifications to games that already exist.

For years, Nintendo has drawn criticism from these fan developers. They claim that Nintendo too often requests removal of their projects on the grounds of copyright infringement. In 2016, Nintendo issued takedown notices for 562 fan games. Some simply wish that Nintendo would leave fan projects alone, especially those that aren't being sold for profit.

Other criticisms are more pointed. Some claim Nintendo has actively taken ideas from their projects, later using those same ideas in official Nintendo releases.

In the case of Super Mario Bros. 35, it's easy to see why its resemblance to a fan game released over a year ago — and targeted by lawyers — has re-ignited conversations about Nintendo's relationship to its fan community.

Infernoplus does not feel like Nintendo "stole" his idea for a battle royale Mario game. But, he says, "I do think that Mario Royale showed them such a thing is profitable. That this little fan game had all these players."

A history of fan influence

Super Mario Bros. 35 is not the first time that an official Nintendo release has resembled an existing fan project.

Famously, a fan game called Another Metroid 2 Remake (AM2R) looked to modernize Metroid II: Return of Samus, a 1991 Game Boy game that had never received a remake from Nintendo proper.

The developer of that game, Milton Guasti, spent years on his free remake. Over time, what began as a personal project became a group effort as artists joined in to create original artwork for the game. When AM2R was finally released for free in 2016 after many years of work, Nintendo sent DMCA notices to both the official project site and several websites hosting the game.

About a year later, Nintendo released their own official modernized remake of Metroid II on the Nintendo 3DS console.

There are many other instances where fan developers have met fan demands before official releases did so — especially when it comes to making Nintendo titles inclusive and accessible to more players.

Fire Emblem is one of the few Nintendo series that deals explicitly with romantic relationships. And until recently, romance options between characters of the same sex were not permitted within the game (despite many a tome being written about existing queer subtext). Fan projects like the Fire Emblem's Gay Awakening work to address this by re-writing some of the game's dialogue and making it possible for characters of the same sex to form romantic relationships.

Although same sex marriage options were implemented by Nintendo in 2015's Fire Emblem: Fates as well as last year's Fire Emblem: Three Houses, the series has been often criticized for its limiting portrayal of queer relationships.

Similar ROM hacks exist for the Harvest Moon series (a series often published by Nintendo, but not developed by them). Fan developer Sean Gibbons created a ROM hack called Harvest Moon: A Proud Life that changes the gender of its lead protagonist — in essence enabling same-sex marriage options.

"If they are not gonna make a game with the kind of representation we want — we'll just do it ourselves," Gibbons says.

It's a feature that is now being implemented in a remake of a Harvest Moon game called Story of Seasons: Friends of Mineral Town.

Other fan projects have made old or difficult-to-find games available to more players.

For example, the classic RPG EarthBound was released in the United States in 1994. Since it's original release, the game has grown in cult-classic status — ironically in large part thanks to its vibrant modding community. Despite fan demand, Nintendo has yet to localize its Japan-only sequel, Mother 3.

The Mother 3 fan translation project, which contains an entire English translation of the game, remains one of the only ways to experience the game with English dialogue.

Video game preservationists and historians say that fan communities have often been crucial to archiving old games. "Most of video game history has been safely and correctly digitized not by the companies themselves, but by fans," says Frank Cifaldi, founder of the Video Game History Foundation.

In 2018, Nintendo filed a lawsuit against several of these popular websites. The biggest of them, LoveROMS, hosted thousands of old and new Nintendo games. "On the one hand, no doubt these sites were serving ads. They were essentially profiting off of piracy of other people's intellectual property," says Cifaldi.

"But on the other hand — there isn't really another method to access most older games."

Cifaldi says that most of these archives are now gone from the "easily accessible" internet. By attempting to defend their intellectual property, Cifaldi argues that Nintendo has hurt a valuable piece of video game history.

"It wasn't just the Nintendo games that went down. It was everything. It was games made in the 70's by companies that haven't existed since the 70's. It was every Atari game, every Intellivision game. Everything from SEGA."

Cifaldi says that Nintendo has been hard on emulation since at least the late 90's. Language on the legal section of their website clearly articulates their stance: "emulation of Nintendo software represents the greatest threat to date to the intellectual property rights of video game developers," it reads.

While it's not particularly surprising that a company like Nintendo often threatens legal action when it comes to defending its intellectual property, it's also not the way all game publishers operate. Other big name entities — like SEGA, Bethesda, and Valve — often work with or alongside fans to develop these experiences.

When SEGA involved figures from the Sonic modding community to work on Sonic Mania, the result was one of the most well received entries to the franchise in years.

"What Nintendo does is the worst case: attacking people with lawyers."

A previous version of the story stated that Fire Emblem: Three Houses was the first Fire Emblem game to introduce same sex marriage options. In fact, it was Fire Emblem: Fates. 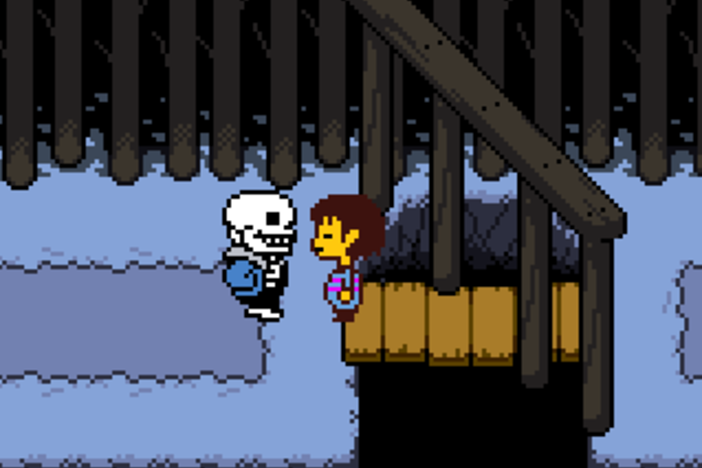 Undertale, the quirky, pixelated adventure game, became a smash hit when it came out because of its unique mechanism: You can talk to its monsters and show them mercy, rather than killing them. 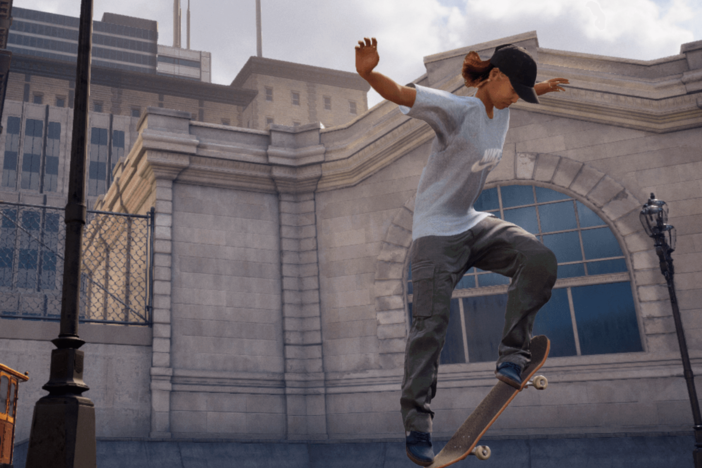 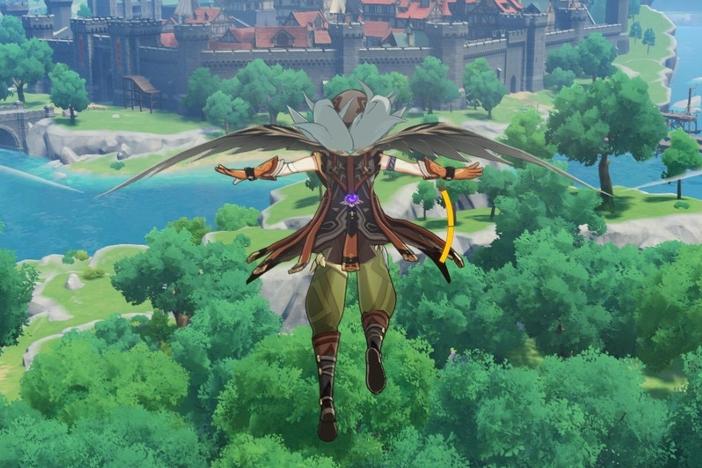 The exploration and combat game Genshin Impact has earned some favorable comparisons to Nintendo's Zelda: Breath of the Wild, but like many free-to-play games, it's good at getting you to spend money.