Anthony Bottom, 68, is at the center of a discussion over elderly inmates convicted of violent crimes in their youth. Reform advocates say after decades behind bars most should go home.

BRIAN MANN, BYLINE: In the late '60s and early 1970s, the Black Panther Party and its more militant wing, the Black Liberation Army, were in open and sometimes violent conflict with the U.S. government, carrying out bombings and attacks on police - this from a 1967 documentary called "Black Liberation."

UNIDENTIFIED PERSON: They are in rebellion against the system which has cruelly oppressed them as a minority.

MANN: Against that political backdrop, a group of men, including Anthony Bottom, then 21 years old, lured two New York City police officers to an apartment building in Harlem in 1971. Authorities say he and other gunmen shot officers Waverly Jones and Joseph Piagentini from behind, a killing police described as an assassination. Bottom was later captured and convicted of two counts of first-degree murder. And like many Black revolutionaries from that era, he's been in prison ever since. Denise Piagentini, widow of one of the officers, petitioned to keep Bottom behind bars. Here she is speaking at a police union event last year.

DENISE PIAGENTINI: Anthony Bottom assassinated my husband and Waverly Jones because they wore the blue uniform. We need to remember that under the uniform, there is a person.

MANN: For years, New York's parole board denied Bottom release, despite the fact that he, like some other former Black Panthers, renounced political violence. Speaking in a 2018 interview with documentary filmmaker Messiah Rhodes, Bottom said he dreamed of going free.

ANTHONY BOTTOM: Dreaming of going home and being with my kids, you know? Of getting back to the community - I want to have my own home.

JOSE SALDANA: I found him to be one of the exceptional mentors within the New York state prison system.

MANN: Studies show inmates age 65 and older rarely commit new crimes after release. Saldana himself was incarcerated for 38 years after a series of violent crimes, including an attack on a New York police sergeant, and was paroled two years ago. He believes the parole board is working better now, allowing elderly inmates who demonstrate reform out of prison.

SALDANA: Instead of being dominated by law enforcement, which it has been for decades or so, the commissioners today are from a diversified background. We have social workers, members of the clergy. We have teachers.

MANN: New York's parole board is also now more racially diverse. Anthony Bottom's release comes at a moment of intense debate and street protests around the country over questions of policing, race and criminal justice reform. Meanwhile, more than a dozen Black activists from the '60s and '70s, men and women, are still behind bars around the U.S., many serving time for attacking police. All are now senior citizens. Brian Mann, NPR News. Transcript provided by NPR, Copyright NPR. 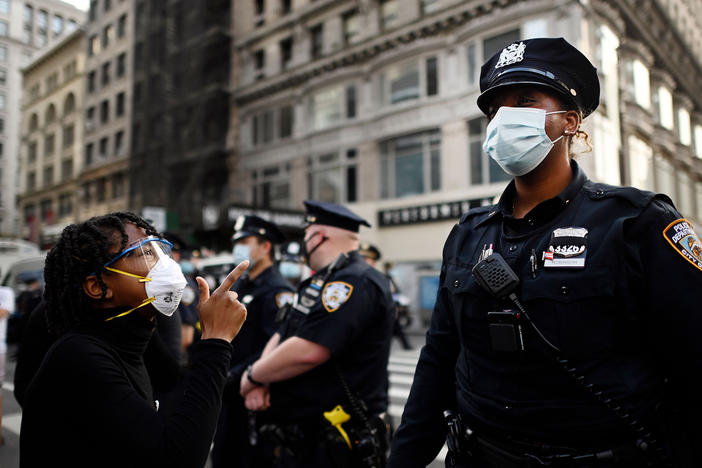 The state attorney general's office says it has received "more than 1,300 complaints and pieces of evidence" about the police response to the protests in New York City.

Some officers are being investigated over involvement at the protests, while others fought off protesters who once supported them.

Farmworkers in Washington state have gone to court to demand overtime pay. Coronavirus outbreaks in agricultural communities have focused new attention on working conditions and pay on farms.