In 2017, Macon author Lauren Morrill was anxious and upset about the political debate about affordable health care.

As so many Americans do when we have strong opinions about a topic, the young adult author took to social media. She fired off a tweet and went back to her life.

Since then, Morrill’s words have been misattributed by a major media outlet, two famous actors and countless artists.

To learn more about the ups and downs of being famously misquoted, GPB's All Things Considered host Rickey Bevington spoke with Lauren Morrill.

Rickey Bevington: Take us back to January of 2017. You were at home watching television. What did you tweet?

Lauren Morrill: It was in the midst of the debates on the Affordable Care Act and the repeal of the Affordable Care Act. I was very involved and interested in that and frustrated by the debate. And as someone who believes affordable health care is a human right, I sat down at my computer on Twitter and tweeted how I felt about people being very individualistic about health care.

Bevington: Give us the tweet in your words (since this is a story about original sourcing).

Morrill: I said my problem in these ACA debates, I don't know how to explain to you why you should care about other people. I was just exhausted. And I tossed it off and then walked away from my computer because I was exhausted and disgusted.

Bevington: At the time, some celebrities picked it up and it was shared.

Morrill: I don't exactly know how it exploded the way it did. I don't know where it started. I have several author friends who have very large followings. At the time I had about, I don't know, four or five thousand followers. And I'm guessing that they shared it and then it just exploded from there. But the next thing I knew, John Legend and Chrissy Teigen had shared it. Sarah Silverman, Joss Whedon. And from there my notifications lost control.

Bevington: But then six months later, you lost control of authorship. What happened?

Morrill: Somebody pointed me towards this Huffington Post article. The headline was, "I don't know how to explain to you that you should care about other people." I had a book out around that time and I was thinking, "Oh, this is exciting. Maybe maybe I'll get a bump." So I clicked on it. I read through it and my heart kind of sank when I saw that there was no mention of me or my tweet in there. So I sort of half heartedly tweeted at Huffington Post saying, "Hey, this is actually mine. Here's the link to the tweet." And I got nothing. And then several friends who were indignant on my behalf also tweeted at them, but nothing ever came of that.

Until the Huffington Post article, that tweet got shared with regularity for those six months all over the Internet. And I would get comments on it and tweets. And then from that point on, it became people sharing the tweets saying, "Oh, this sentiment, this is so meaningful or so powerful or to so many other things." And I would still get some tweets. I mean, every time there would be any kind of human rights issue with the current administration, with gun control, with the border crisis, any time health care would come up, it came blazing back during COVID. I was getting so many, it was getting shared. And that's about when I saw that not only did it leave me and not only did it leave from Huffington Post but it was being attributed in all kinds of graphics to Dr. Fauci. It was very strange.

Bevington: That it has been traced to July 6th of this year with the actress Martha Plimpton sharing a graphic of your quote, one of those really nice social media graphics. Somebody took the time to really put it together, attributing it to Dr. Fauci with #wearamask. What did you think when you saw that? 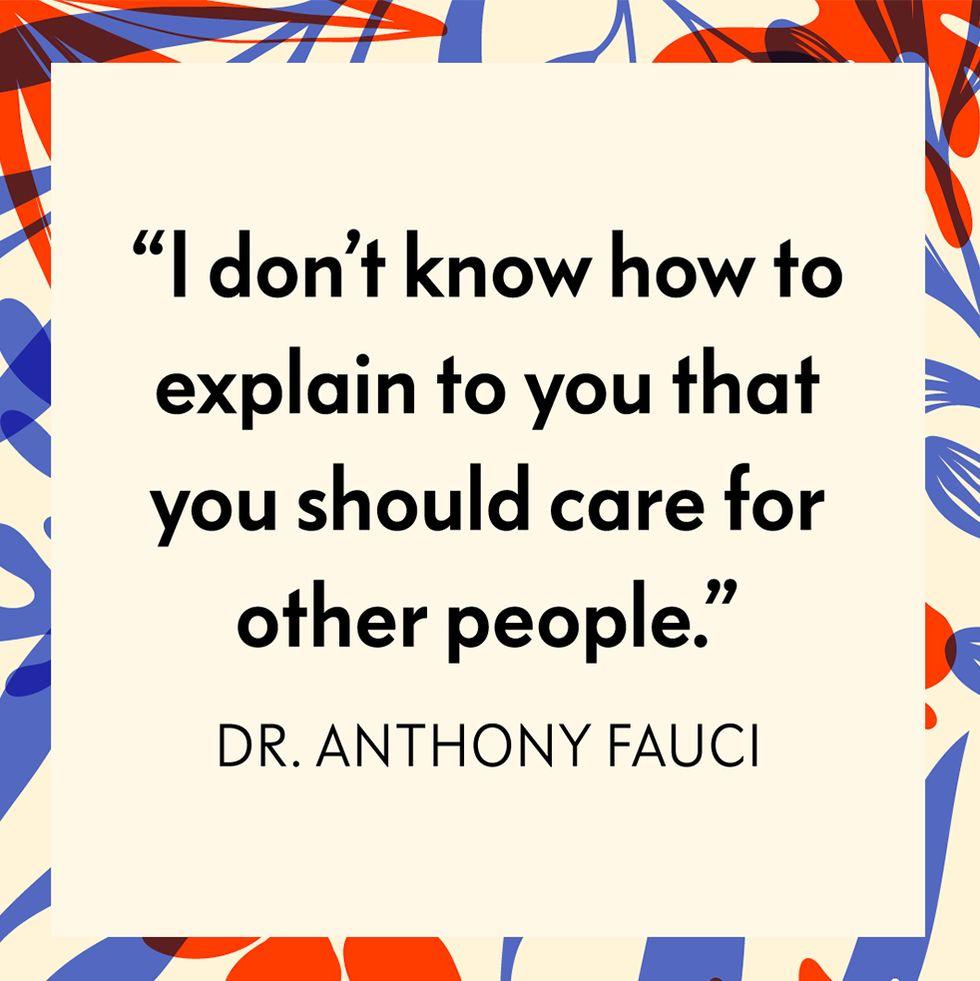 Morrill: Honestly, at that point, I was like, "Oh, come on. The Internet is a wild place." At the same time, I also couldn't get mad because, I mean, I knew for sure, Dr Fauci, had not said it. It was disappointing.

Bevington: We should be clear. Dr. Fauci has never claimed to have said this either. It's not like he's trying to steal this from you.

Morrill: Oh, no, of course not. I mean, honestly, the man has been through a lot. He can have it. But no. It was one of those things where when it came back with COVID and was getting shared everywhere. It was being made into these beautiful pieces of art. And that's when it really got shared everywhere. And that was when I really started feeling frustrated.

The first piece of art that I saw was an artist. I think he goes by BLCKSMTH and he makes word art out of Mylar balloons. And he shared it and he attributed it to Huffington Post. And that was another day that I was just exhausted. And I so I had messaged him and I said, "You know, I actually said that. Here's the link to the tweet. You know, I would really appreciate it if I could have the credit for that." And he messaged me back immediately and said, "Oh, my gosh, I'm so sorry." Of course, he changed the credit right away.

And what I have found in the last couple of months is that the people most responsive to proper credit are the artists who make those graphics. Because more than anything, artists understand what it means to have their work, you know, their credit struck from their work and then watch it go viral. And when you're an artist and you discoverability is the way you make your money, they're very sensitive to that. So artists very quickly were changing the credit to put to put my name on it. And I really appreciated that.

Bevington: People might say, "Well, credit doesn't matter. That's just your ego." But in the Internet age, there is real money at stake with a viral post. And you've had firsthand experience inside your own household witnessing this.

Morrill: Yeah, yeah. My husband was a journalist and journalism professor at Mercer University, and he had made a video about how to make New York style pizza home. And put it on his YouTube channel, for which I think he had a handful of followers. And it got shared on Reddit. And because you can't strip credit off a YouTube video. It's there and you can't take it away. It was very easy for people to find the guy who made the pizza video. And he was able to make more videos and kind of chase that following. And now he has almost a million followers. He is a full-time YouTuber. And our lives are completely different than they were two years ago at this time.

And for me as an author. You know, the reason I am on the Internet to begin with is to increase my discoverability so that people can find me, can find my books. If they like me on the Internet, they might like my books. And so for that tweet to go all around the Internet and back again, millions of people have seen it. And 99% of them don't know who I am. That's really disheartening.

Bevington: How did Oprah magazine find out about it? To set the record straight. Do you know?

Morrill: I'm not totally sure. I got an email from Ashley Spencer, who is the reporter who did it. I will say right when the Martha Plimpton and Busy Phillips shares came out and all of my friends pointed me to it and they were so upset on my behalf. So I got online and I tweeted and said, you know, "This is my most visible piece of writing. More people have read this tweet than have read all of my books combined. And if I think about that for too long, it makes my head explode. But I'm going to say for the record, this is mine. I wrote this. And if you like it here's other things I've written that you might like." 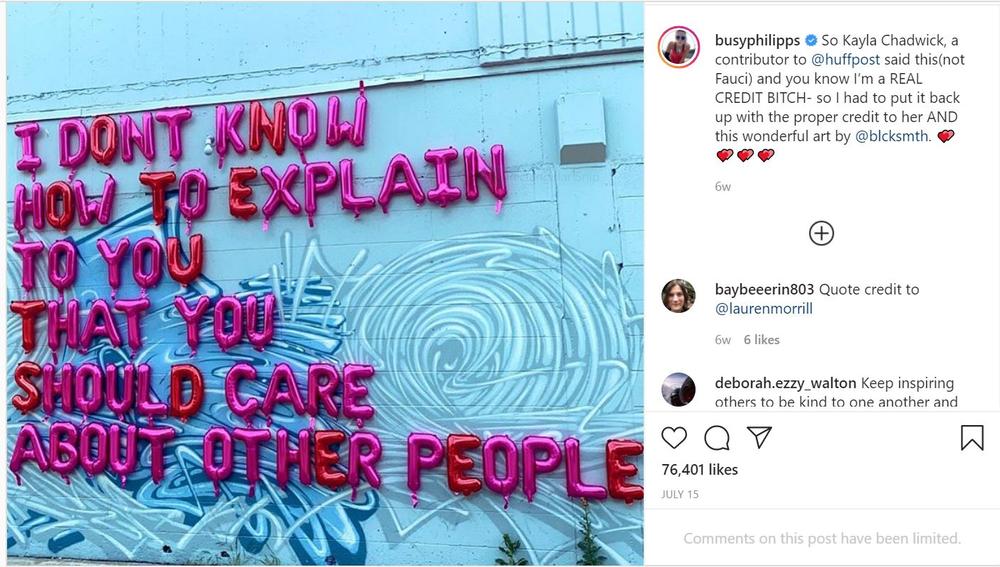 That got shared around a few times and she must have seen that. And she was curious how it happened in the first place. She tried to figure out who made the original Fauci graphic and could not, but she was able to find that no one else had used the phrase that I used anywhere on the Internet before me. So I felt good for that validation.

Bevington: Well, we're here to validate that it is Lauren Morrill who wrote those very words all the way back in 2017. And we have not reached out to Dr. Anthony Fauci for comment, but we assume that he's very busy, right?

Morrill: Yes. I would not expect him to take even a second out of his day for this. He's got a lot on his plate. And hopefully, you know, I have a book out in March. I don't know what the world's going to look like by then. It sure would be nice if I could go out and promote my work, but if I can't get my Internet presence is all I've got. I'm just trying to make sure people know who I am and maybe buy my book from that.

Bevington: Lauren Morill, thank you so much for joining me.

Morrill: Thank you so much for having me.

You can learn more about Lauren Morrill's books, including her forthcoming "It's Kind of A Cheesy Love Story," at her website.

Taking stock of the U.S. Postal Service's ability to process parcels — and ballots — amid financial struggles; renowned Southern pastry chef Lisa Donovan on her new memoir, "Our Lady of Perpetual Hunger"; author Lara Prescott on her debut novel, "The Secrets We Kept"