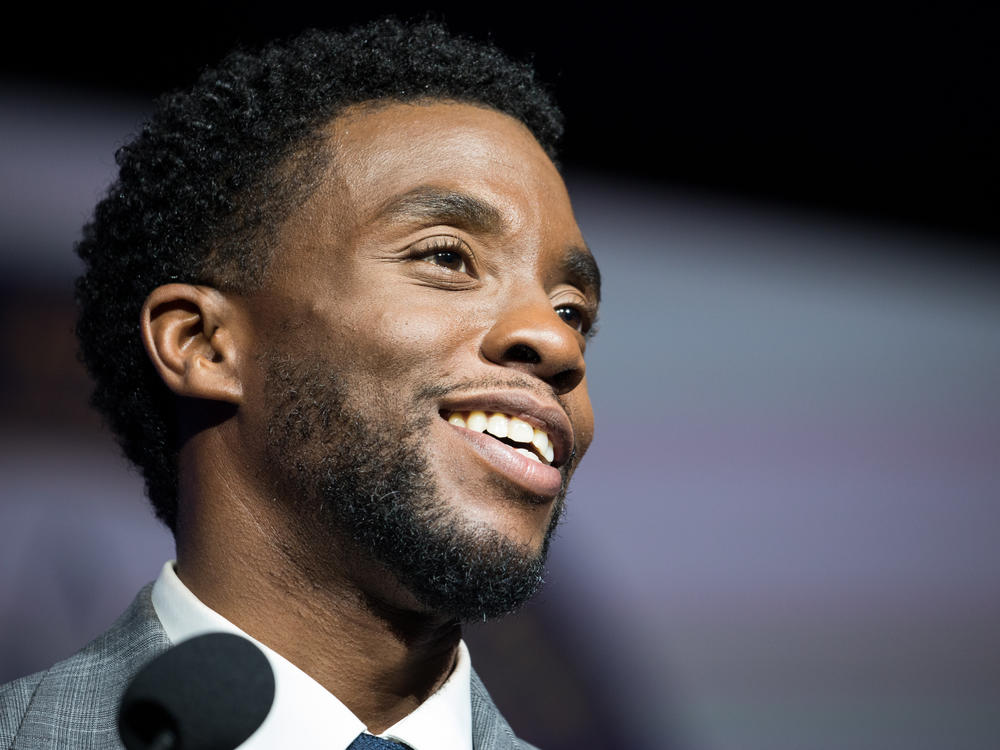 Caption
In his role as superhero Black Panther, Chadwick Boseman became the face of the Marvel Cinematic Universe's first film headlined by a Black actor.

Actor Chadwick Boseman, who starred in Black Panther, has died at the age of 43. A statement posted on Boseman's Twitter account on Friday said the actor had battled colon cancer for the past four years. The statement said "he died in his home, with his wife and family by his side."

"A true fighter, Chadwick persevered through it all, and brought you many of the films you have come to love so much," the statement said. "From Marshall to Da 5 Bloods ... all were filmed during and between countless surgeries and chemotherapy."

Boseman was born in South Carolina and is a graduate of Howard University. Throughout his career, he was known for his portrayals of iconic historical Black figures such as Jackie Robinson in 42 and James Brown in Get on Up.

In his role as the Marvel Studios superhero Black Panther and his alias, king T'Challa of Wakanda, Boseman became the face of the Marvel Cinematic Universe's first film headlined by a Black actor. He won praise for his first appearance as the Black Panther in Captain America: Civil War, garnering excitement for the character's own feature film.

Black Panther, which starred a predominantly Black cast, was lauded during the 2019 awards season for its Black representation. In his speech at the 2019 Screen Actors Guild Awards, where the film was honored with the award for Outstanding Cast In A Motion Picture, Boseman addressed the film's cultural impact and why the cast was inspired to participate in the groundbreaking superhero flick.

"And that is what we went to work with every day. Because we knew not that we would be around during award season or that it would make a billion dollars, but we knew we had something special that we wanted to give the world," Boseman added. "That we could be full human beings in the roles that we were playing, that we could create a world that exemplified a world that we wanted to see."

Boseman graduated from Howard University in Washington, D.C. with a bachelor's degree in directing in 2000. In 2018, months after the release of Black Panther, the actor addressed students at the university's commencement. After a year marked by protests over a financial aid scandal, campus housing, and tuition increases, Boseman praised the university's student activists, telling them that "everything that you fought for was not for yourself, it was for those who came after you."

"Savor the taste of your triumphs today," Boseman told the graduates. "Don't just swallow the moment whole without digesting what is actually happening here. Look down over what you conquered and appreciate what God has brought you through."

Boseman was awarded an honorary doctorate at the ceremony, where Wayne A. I. Frederick, the university's president, called him "a shining exemplar of our cherished core values of leadership, excellence, truth and service."

Across social media, fans, celebrities and public officials expressed their sympathies and reactions.

On Twitter, Joe Biden and Kamala Harris, the Democratic candidates for president and vice president, expressed their condolences.

"He left too early but his life made a difference," Harris wrote.

Biden praised Boseman's portrayals of the Black Panther and Jackie Robinson, saying that the actor "inspired generations and showed them they can be anything they want – even super heroes."

In a statement to Entertainment Weekly, actor Denzel Washington remembered Boseman as "a gentle soul and a brilliant artist, who will stay with us for eternity through his iconic performances over his short yet illustrious career." In a 2018 interview with Rolling Stone, Boseman revealed when he did not have the money to attend a summer theater program at Oxford University in England, Washington became his benefactor. Boseman didn't find out who paid for his program until he came home and received a beneficiary letter.

Many of Boseman's Marvel co-stars publicly mourned their friend. "All I have to say is the tragedies amassing this year have only been made more profound by the loss of #ChadwickBoseman," Mark Ruffalo, who portrayed Dr. Bruce Banner, also known as the Hulk, wrote.

Captain Marvel star Brie Larson said Boseman was someone who "radiated power and peace." Larson portrayed Carol Danvers, or Captain Marvel, in the MCU's first film headlined by a woman. The newly introduced characters Captain Marvel and Black Panther were set to lead the next phase of Marvel films following Avengers: Endgame.

Don Cheadle, who portrayed War Machine in the Iron Man and Avenger films, said Boseman was always "light and love" to him.

Angela Bassett, Boseman's onscreen mother in Black Panther, reminisced about the day when she received an honorary degree from Howard University. Boseman was still a student then and was assigned to escort her that day. Years later, she wrote that they would spend "weeks prepping, working, sitting next to each other every morning in makeup chairs, preparing for the day together as mother and son."

"I am honored that we enjoyed that full circle experience," Bassett added. "This young man's dedication was awe-inspiring, his smile contagious, his talent unreal. So I pay tribute to a beautiful spirit, a consummate artist, a soulful brother." 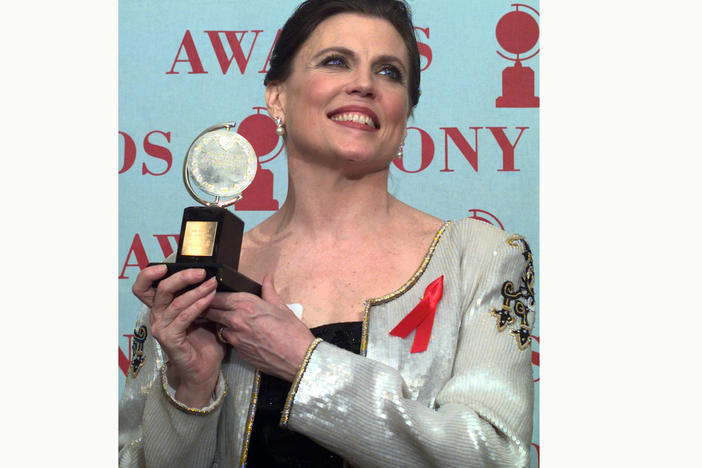 A mainstay in Broadway musicals, her standout turn as Roxie Hart in Chicago in 1977 earned her widespread praise. She reprised the role in 1996 and won a Tony. 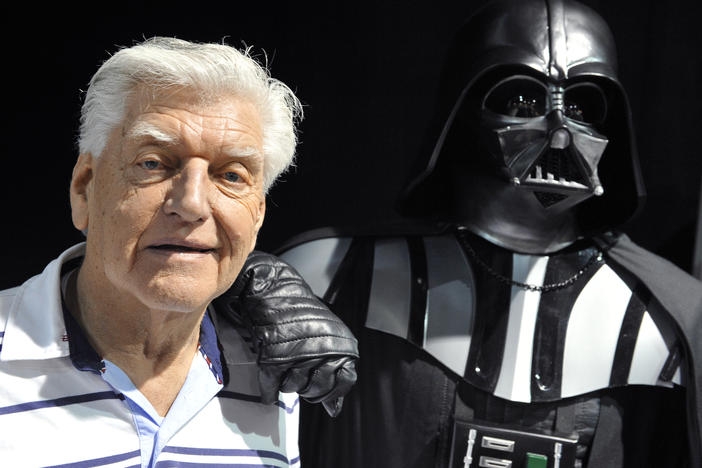 Audiences heard James Earl Jones' voice as the iconic Star Wars villain, but it was Prowse behind Darth Vader's mask. 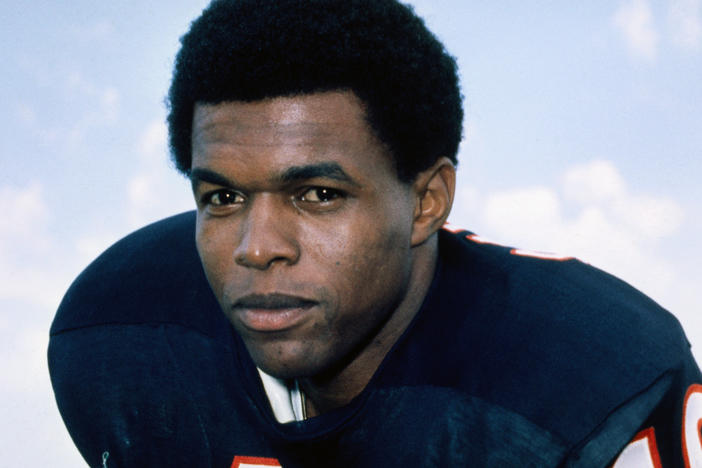 The story of the Black football star's friendship with a white teammate, Brian Piccolo, who died of cancer inspired the 1971 TV movie Brian's Song.