GPB "All Things Considered" host Rickey Bevington speaks with Dave Williams of the Metro Atlanta Chamber about the organization's efforts to recruit tech-savvy poll workers ahead of the November 2020 election. 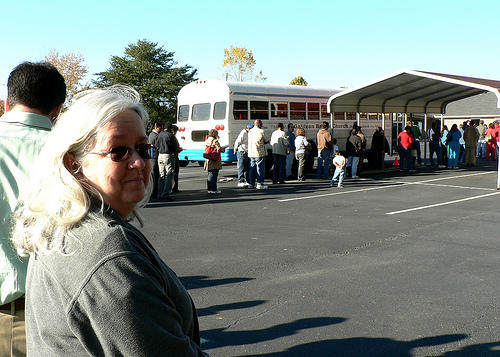 The average age of Georgia poll workers is 70.

In June, thousands of Georgians – mostly in metro Atlanta – waited hours to vote in the primary election.

Among the causes of long lines were fewer poll workers and those who reportedly had trouble operating the state's new voting machines.

The average age of a Georgia poll worker is 70.

"People are thinking, ‘How can I make a positive difference in my community?’” said Dave Williams, Senior Vice President of Public Policy, Government and Infrastructure. “This is one opportunity that people may have never considered before."

Rickey Bevington: So the call to action is for "tech-savvy" poll workers. What do you mean when you say tech-savvy?

Dave Williams: Well, as you remember, on June 9th, Georgia had a tough day. We had thousands of voters who encountered a lot of problems at their precincts, had to wait in long lines. We believe that by having more poll workers, particularly those who are comfortable with technology, that they're comfortable with devices and tablet computers, that they can help address some of the problems and challenges that come up. It might be as simple as clearing a paper trail. But those are the sorts of folks that we'd love to see more of, although we'd like to have any volunteers that could help, even if they're don't necessarily consider themselves tech savvy.

Bevington: Is this kind of initiative typical for a chamber of commerce to get involved in?

Williams: I'm not aware of any other chambers that have specifically taken on a poll worker recruiting program, but certainly a lot of chambers, including ours, are very committed to making sure that our communities are healthy, sustainable, have governance that runs smoothly and has earned the public trust.

Bevington: What are you hearing from companies in Georgia so far? I mean, obviously, you're leveraging your platform to recruit through companies. How are they responding?

Williams: Well, it's very early. We just really kicked this program off on Tuesday (July 28). We've heard from several companies. What we're asking them to do is push out the opportunity for their employees to be a poll worker on Election Day for the November elections. For example, we've heard from Delta Airlines and Delta has told us that they will push this information out and encourage their employees to go to www.GAPollWorker.com and sign up to be able to be a poll worker for the November elections.

Bevington: The voting problems that took place in Georgia in June were very concentrated in metro Atlanta. Really, Fulton County. Is there this kind of need for younger, more tech-savvy poll workers elsewhere in Georgia, or is this really a metro Atlanta problem?

Williams: I don't think the problems were necessarily limited to metro Atlanta. There were, with the pandemic going on, a lot of folks who are traditional poll workers (who) just weren't able to work. The average age of a poll worker in Georgia is over 70. And so a lot of those folks were limiting their outside mobility. They might have been even sheltering in place. As a result, the normal labor pool was a fraction of what it originally would be. So I think that every community throughout Georgia would be able to benefit from more poll workers if they're younger. If they're tech savvy, then they're even more valuable.

Bevington: And I think it's important to point out poll workers are not volunteers. What is the incentive for people to come out and do this work?

Williams: That's a great point. I sometimes catch myself encouraging people to volunteer to be a poll worker. It's not a volunteer job. Everyone that works will get paid. The pay varies based on what the exact role that folks might have in their precincts. And t's important to realize that it's not just on Election Day, November 3rd. It's also in the period leading up. We have early voting needs. We also have work especially the week leading up.

Bevington: Some high profile companies nationwide have announced making Election Day a company holiday. Apple is a big example. That would obviously make it easier for Americans to vote. But it would also make it easier for employees to go work as a poll worker on Election Day itself. Have you heard any wind of that idea for any Georgia companies?

Williams: I have heard that companies are doing that and more may be considering that as well. That's not the specific thrust of the program that we've launched right now. There is absolutely, though, an intention and a desire for companies to have their employees be more engaged in the civic process here.

Bevington: Thank you so much for joining me.

Williams: Can I offer one last thing? It's really important that people take action quickly. We're able to take people's submissions through the middle of September. So [that's] only about six weeks from now. These poll workers need to be on board and trained and then early voting starts in October. So I just want to make sure people understand the urgency of this. It's important to do it, but it's more more important to go to www.GAPollWorker.com and sign up soon. Thank you for letting me add that.

Bevington: OK. Dave Williams, thank you so much for joining me.

Williams: It's been my pleasure. Thank you.

A federal judge says every polling place in the state must have updated paper copies of the list that shows who is eligible to vote in case problems arise with the check-in computers.