This story is part of an NPR nationwide analysis of states' revenue and budgets during the pandemic.

New Jersey extended its fiscal year by three months in the face of massive revenue shortfalls caused by the COVID-19 pandemic.

Instead of developing a full fiscal year budget amid the outbreak, lawmakers passed, and Democratic Gov. Phil Murphy signed, a temporary spending plan to keep the state operating from July through September.

"In the most essential terms, this three-month plan can be described in two words: cuts and uncertainty," Murphy said in June. "And it contains plenty of each."

The $7.6 billion budget includes $1.2 billion in spending cuts and delays a $951 million payment toward the public worker pension system until October.

Murphy also signed legislation passed by the Democratic-controlled legislature allowing the state to borrow $9.9 billion to make up for sinking revenues. Republicans have sued to block the plan.

Officials said the state could be short by as much as $20 billion by the end of 2021, and Murphy has continued to emphasize the need for major federal cash assistance from the Trump administration. 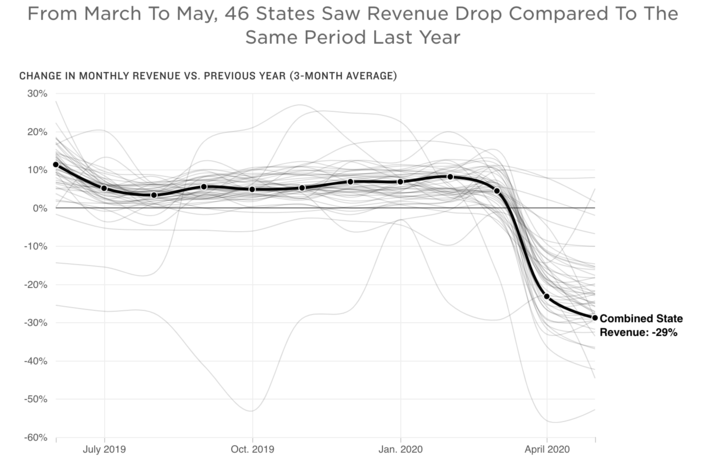 States Are Broke And Many Are Eyeing Massive Cuts. Here's How Yours Is Doing

Some states face record-breaking deficits because of the coronavirus pandemic. We asked local reporters across the country to tell us what could be on the chopping block in your state.

During the coronavirus pandemic, states have struggled with staggering revenue losses and budget shortfalls. Here's what is happening in Nebraska.

During the coronavirus pandemic, states have struggled with staggering revenue losses and budget shortfalls. Here's what is happening in Wyoming.