Powerful Earthquake Strikes Off Alaska Coast; No Reports Of Damage Or Injury

A powerful 7.8 magnitude earthquake has struck the southeast coast of the Alaska Peninsula, triggering a tsunami warning and evacuations. But initial reports nearest the epicenter indicated a wave of less than a foot.

There were no immediate reports of damage or injuries.

Alaska Public Media reports that residents from Homer to Unalaska moved to higher ground after the Aleutian earthquake, which the U.S. Geological Survey said struck around 10:12 p.m. local time (2:12 a.m. ET) about 75 miles south of Chignik.

The temblor occurred at a depth of 6 miles.

Warning sirens in Homer could be heard wailing in video posted to social media.

Sand Point, the first community in line of a potential tsunami reported only a "very small" wave, just after 11 p.m., James Gridley, the director of NOAA's National Tsunami Warning Center in Palmer, told AKPM. He estimated the wave at about 10 inches (about 25 centimeters).

Gridley said it was too soon to say what Kodiak and Cold Bay may see but "likely small if we're already seeing small at Sand Point."

"We're not expecting a massive wave anywhere," he said.

Although it was subsequently lifted, a tsunami warning had been issued shortly after the quake for South Alaska, the Alaska Peninsula from Kennedy Entrance to Unimak and the Aleutian Islands from Unimak Pass to Samalga Pass.

A tsunami advisory was posted for other nearby areas, but the USGS said no other U.S. and Canadian Pacific coasts were considered at risk.
Copyright 2020 NPR. To see more, visit https://www.npr.org.

A Tsunami Warning Has Been Issued For Parts Of Alaska After An 8.2 Quake

The U.S. Geological Survey said the earthquake Wednesday evening was magnitude 8.2 and struck 56 miles east southeast of Perryville, Alaska, off the state's peninsula.

Young, who was first elected to the U.S. House in 1973, was known for his brusque style. In later years in office, his off-color comments and gaffes sometimes overshadowed his work. 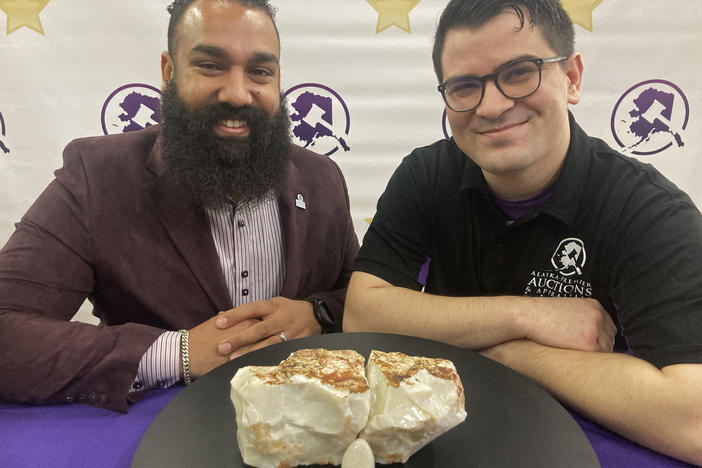 The "Americus Australis" gem weighs more than 11,800 carats and is one of the largest gem-quality opals in existence. It also has a long history.