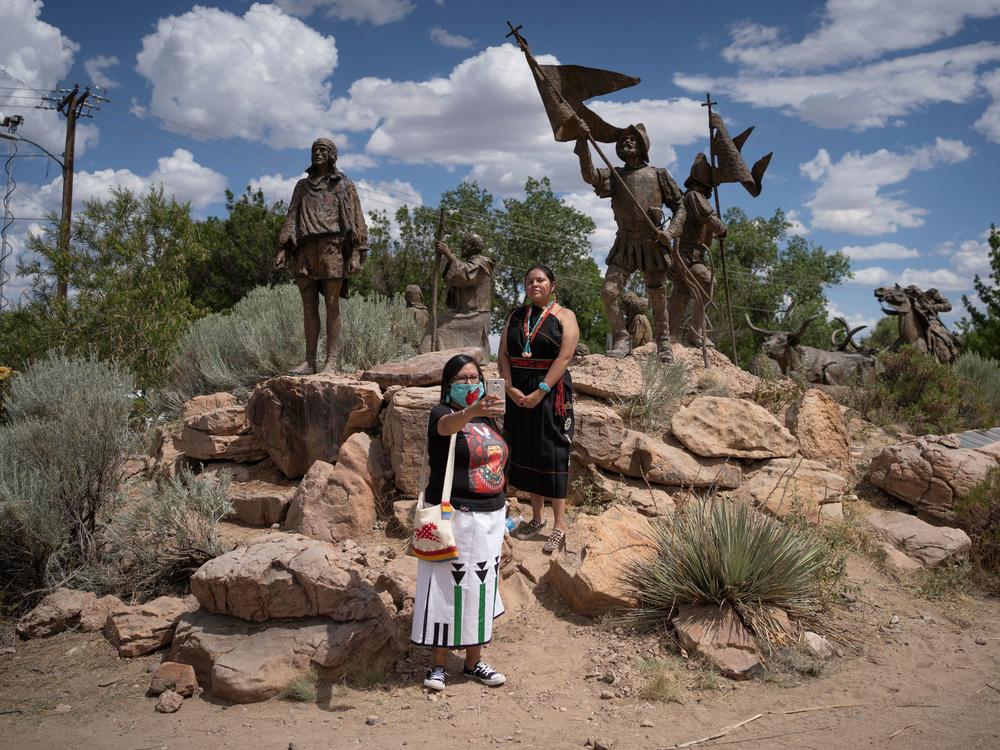 Channing Concho, left, and American Horse photograph themselves in front of a memorial after a sculpture of Spanish conquistador Juan de Onate was removed on June 16, 2020 in Albuquerque.

The movement for racial justice is toppling statues across America, from Robert E. Lee to Christopher Columbus — and now the Spanish conquistador, Juan de Oñate, the first European to colonize the arid wilderness of New Mexico, the state's first colonial governor and a despot who inflicted misery on Native Americans.

Tensions boiled over recently at a demonstration to remove his statue, where a man seen defending the statue allegedly shot a protester. The confrontation has revealed fault lines over how native and Hispanic history are told.

Time was when there were costumed pageants in the cities of Santa Fe and Española that reenacted the entry of Spanish governors into New Mexico, but both have been permanently cancelled after protests that they were culturally offensive to Native Americans.

And time was when there were two bronze statues of Oñate, who established the first European settlement in America west of the Mississippi. In Albuquerque last month, protesters wrapped a chain around the neck of the bearded, armored figure, chanting, "Tear it down!"

Authorities have removed both statues and put them in storage, with their futures uncertain.

The outrage that erupted over police killings of George Floyd and others has swept across the country and stoked longstanding resentments against symbols of Confederate and colonial oppression.

"I think it has triggered a lot of reflection on some of these monuments and how these monuments portray, at least in New Mexico, this idea of Spanish American white supremacy," said Moises Gonzales, a professor at the University of New Mexico and a Chicano Native American activist who helped organize the statue protest at the Albuquerque city museum.

Historically, Native Americans say they were tyrannized by Spaniards. Hispanics say New Mexico wouldn't have its unique hybrid Spanish-native culture if it weren't for their ancestors.

Melanie Yazzie, who is Navajo, asserts that original inhabitants deserve the dominant voice. She's a professor of Native American and American Studies at UNM and a co-founder of the Indian rights group, The Red Nation.

"I mean, this is Albuquerque," she said, "and it's considered kind of an American city. But this is actually Tewa land. This is Pueblo land. And so the people you should be listening to, first and foremost, when it comes to the history of colonization are the native people whose land you're occupying."

New Mexico has a complex history. For instance, the Spanish were enslaving Native Americans there even before African slavery was widespread in the southern US.

"Our history has not always been harmonious. At all," said Albuquerque Mayor Tim Keller. "It has been filled with atrocities and with bloodshed and with challenges. And those scars are still very fresh. Essentially, they're like scabs over a wound and they can be picked off and the bleeding begins again."

For some New Mexicans, the figure of Oñate in bronze, and the name Oñate on a local elementary school and on a building at UNM, represent a festering wound.

"Someone might look at the statue and say, 'I see the beginning of Hispanic culture. I see the Spanish language being brought. I see Catholicism starting here,'" said state historian Rob Martinez. "But someone else will look at it and say, 'I see my religion being suppressed. I see my culture being eliminated. I see my ancestors being forced to work and pay tribute.'"

The person whom one historian calls the last conquistador is one of the seminal figures in New Mexico history.

Oñate left Mexico in 1598 with a long caravan of settlers, missionaries, and livestock to establish a colony at his own expense, with the goal of subjugating and Christianizing the Indigenous population and extracting all the riches he could. He made land grants to his colonists and empowered them to collect tribute from the forced labor of Indians.

In the most infamous episode, Spanish soldiers who had demanded cornmeal and blankets from the Indians of the Acoma Pueblo were attacked by native warriors. Twelve soldiers died in the fighting. In retribution, Oñate declared a war "by fire and blood" against the Acoma. Soldiers returned, scaled the soaring mesa — now known as "Sky City" an hour west of Albuquerque — and slaughtered at least 800 warriors, women and children. The Spaniards enslaved most of the survivors, and cut a foot off of 24 young men as a warning to other rebellious pueblos.

Even by the harsh standards of the day, Oñate's actions were judged extreme.

"He was taken out of here around 1606 and put on trial in Mexico City for cruelty to the pueblo people at Acoma and for cruelty to colonists," Martinez said. "Some of them deserted because they were unhappy here, so he ordered his soldiers to hunt them down and behead them."

"I am glad that the city has decided to remove the statues, and I hope that the mayor and others at the city will take a careful look at a direct dialogue with tribes and those individuals who are at the forefront of these protests," Vallo said.

But some Hispanic New Mexicans — many who trace their lineage to the founding colonists — are just as adamant that their history be told, not erased.

"Sure he wasn't a saint, but you can't put aside what the Spanish brought — the horse, the pig, sheep, the cow, wine and the mining industry," said Reynaldo "Sonny" Rivera, the acclaimed sculptor of the two Oñate statues.

The one in Albuquerque was of the conquistador afoot, leading a procession of settlers with oxcarts and animals, and the sculpture in Alcalde, north of Santa Fe, showed him on a horse ready for battle. Though Rivera gave his okay for the city to remove the Albuquerque statue for safekeeping, he's fuming over the outcome.

"Indian lives matter. But also my people, Hispanic lives, matter. I matter. My art matters. And I'm pissed," he said.

Some New Mexicans were angry when the state placed a statue of the Pueblo warrior and religious leader, Pópay, in the National Statuary Hall inside the U.S. Capitol in 2005. He led the 1680 Pueblo Revolt that drove the Spanish out of New Mexico for 12 years, making it the first successful uprising against colonial Spaniards. The large Pueblo army killed 400 men, women, children and friars.

"Some of my ancestors were killed in that rebellion. I don't hold it against the Pueblo people today. That was then. This is now. We're supposed to live together now," says Tom Chavez, a historian and former director of the state history museum.

Yazzie, the Navajo scholar, says the Oñate statues had to come down because there must be honesty if there's going to be coexistence.

"These monuments glorify colonialism," she said, "and they have really erased the history of native resistance."

Ramón Gutiérrez agrees with her. He's a noted historian of colonial Latin America at the University of Chicago, and a native New Mexican.

"If they (the Oñate statues) are wreaking havoc with the population that is here, and causing these memories of trauma and memories of the violence that was perpetuated on them," Gutiérrez said, "yes, put them away, melt them down."

Disagreement over the statues still smolders, but it's not always so strident, especially when it's in the same family.

A teenager and his grandmother stand outside the Shrine of Our Lady of Lourdes after a recent morning mass in Ohkay Owingeh Pueblo. The reservation, located between Santa Fe and Taos, is the home of Pópay. 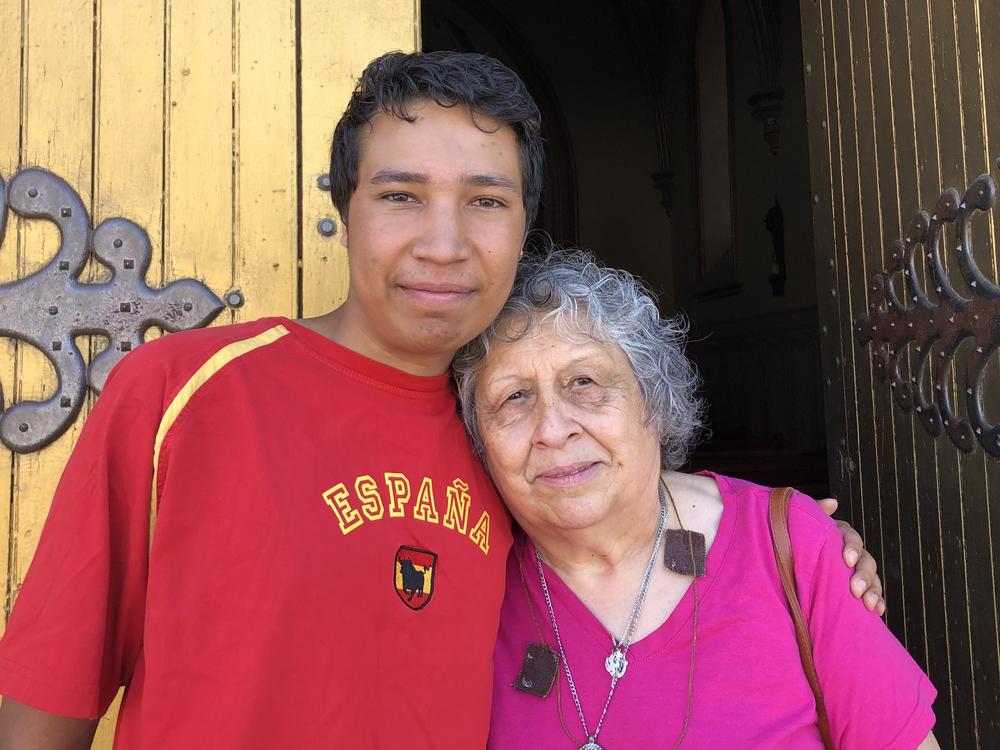 Matthias Bowie and his grandmother Lynda Martinez stand outside the Shrine of Our Lady of Lourdes after a recent morning mass in Ohkay Owingeh Pueblo.

Matthias Bowie is 16-years-old and identifies as native. He says he read about Oñate in grade school, and he's glad the horse-mounted statue — located just outside of his pueblo — is gone.

"He did make some horrible decisions and mistakes. And I definitely can see why there's the whole controversy around him, and I do agree with removing him," Bowie said.

His grandmother, Lynda Martinez, is a retired junior college teacher who identifies as Hispanic. And she thinks the removal of the statue was wrong.

"We're mestizo. You know, it's not like we're Hispanic from Spain or we're totally native. We're not. We are a melting pot," she said. "And what people don't understand at this point and time is that we need to come together. What happened in the past happened. And what my grandson said is Oñate wasn't a very good person. But that doesn't give anybody the right to come and blame the Hispanic, blame the natives. It's not right at all."

The renowned Acoma poet, Simon Ortiz, wrote: "Time does have mercy. But doesn't enumerate or wait. It moves. And we move with it."

In New Mexico, they're wrestling with how their history should be told as time changes. 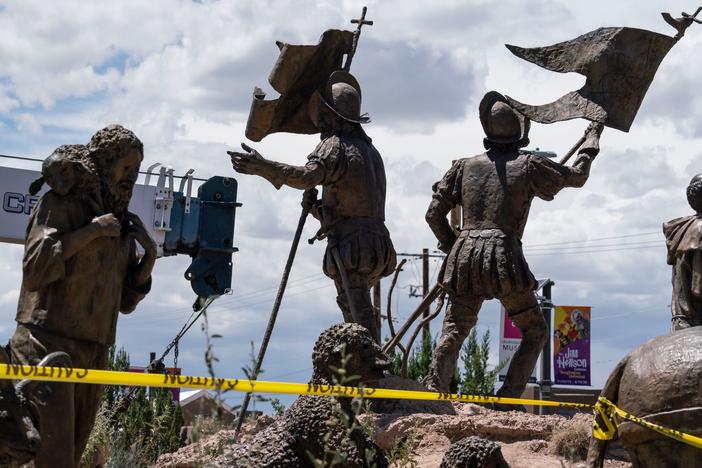 New Mexico Leaders To Militia: If You Want To Help Community, Stop Showing Up Armed

Armed militias have become a feature at anti-quarantine protests, racial justice marches and monument removals. But after a shooting in Albuquerque, locals say militias are disturbing the peace. 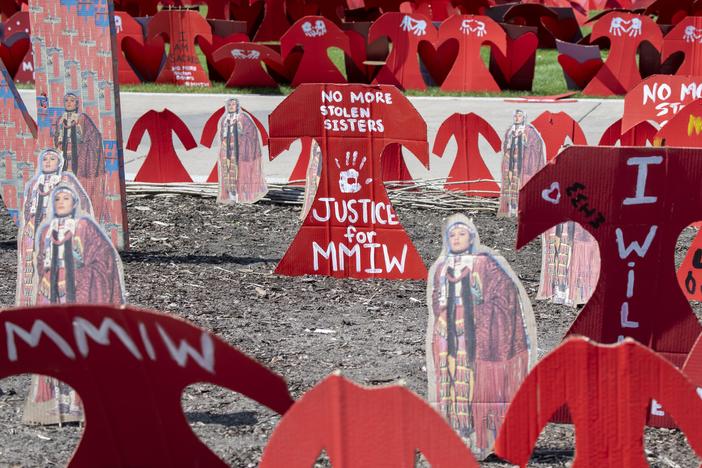 Media coverage around the death of 22-year-old Gabrielle Petito looks racist to those who note that murders and disappearances of Native Americans are mostly ignored. 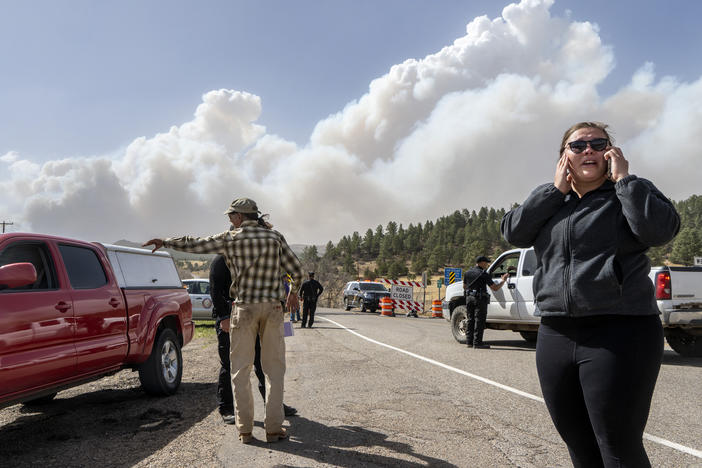