In 1970, a riot devastated the African American neighborhoods of Augusta, Georgia. Remarkably, many locals and historians have never heard of this historic event.

Journalist Sea Stachura joined GPB All Things Considered host Rickey Bevington to discuss “Shots In The Back: Exhuming the 1970 Augusta Riot.” It’s a new podcast from Georgia Public Broadcasting and the Jessye Norman School of the Arts.

GPB All Things Considered host Rickey Bevington interviews journalist Sea Stachura, host of the podcast "Shots In The Back: Exhuming the 1970 Augusta Riot."

This conversation has been edited for conciseness and clarity

Rickey Bevington: A note for our listeners, this conversation does include discussion of difficult topics, including torture, that may not be appropriate for all audiences.

So, Sea, there are several moments of surprise in the first episode, such as the voices of locals who have never heard of the Augusta riot. Why don't people in Augusta know about this major event in their own city's history?

Sea Stachura: It's amazing that actually a lot of Southern and civil rights historians also don't know about this. It seems that at the time, the city and the state's elected leaders were segregationists. So they tried to downplay the significance of this event. News media more recently have done kind of cursory "Did you know?" sort of pieces on the anniversaries. And so there's nothing that says to a person in this town or across the state that this is significant, that they should pay attention to this.

Bevington: How did it start? Who was Charles Oatman?

Stachura: It started on May 11, 1970, after a protest about the death of Charles Oatman. Charles was a frail, 16 year-old boy, intellectually disabled, who had been placed in the county jail for accidentally killing his niece. He was there for six weeks. He was tortured in jail. But when his body was finally brought to the mortuary, the sheriff's department said simply that he had fallen off of his bunk and died. But his body clearly showed signs of torture.

Bevington: It's rather graphic. In the podcast, witnesses who saw the body describe what they saw. What happened to Charles Oatman?

Stachura: We're not entirely sure. Two teenagers who were in the cell with him admitted to killing him but many have questioned whether that was a forced admission. In that six weeks, it appears that he was beaten. He was burned with cigarettes and fork marks were scattered across his body. His lungs were also filled with fluid. It was a significantly painful time for this boy before he died.

Bevington: One of the other surprises in your podcast, Sea, was your choice to tell the story of Charles Oatman and the riot itself through the eyes of children roughly 12 years old. Let's listen to one of their comments. This is a young person reacting to what you just described, the evidence of torture on Charles Oatman's body.

Voice of 11 year-old girl: "Um, I have a question. So if people in the jail cell with Charles Oatman, if they was beating him up, how come the guards didn't, like, see it or hear it happening?"

Bevington: This is adult stuff. Why did you make this particular creative choice to tell this story? To include these kids?

Stachura: We talk about history mattering in part because we don't want to repeat it. Unfortunately, these are things that some of the children were familiar with via proxy. They had friends who'd been stopped by the police and assaulted. They had relatives who were in jail. And so it's adult stuff but it's not completely removed from their lives. But I think more central to the podcast, I wanted their honesty, their unguarded willingness to ask questions like, "Why would a guard walk right past this?" Those questions, I think, are questions that we're all asking. But the kids' presence in the podcast allows us to think about those for just a minute or two and really gets at the heart of why do we care to listen to this at all?

Bevington: Once the violence got under way, what happened during the riot?

Stachura: The riot lasted about two days and over 100 blocks of neighborhood were damaged. About 80 businesses were destroyed, meaning they were either set fire to or robbed. Six men were shot by police. All of those people were shot in the back as they were running away. And only two of them were definitely involved in illegal activity. The aftermath of that was, I think, pretty profound for the African American community in Augusta. The central business district of that community was destroyed. It was also left largely without white and Chinese American owned businesses. Those were the ones that were targeted during the riot.

Bevington: What was the media coverage at the time? And why hasn't the media really dug into this until this podcast?

Stachura: The story did get some national coverage at the time and some state and local [coverage]. But the coverage was largely "black people have gotten out of hand and Governor Lester Maddox and the National Guard have put things back in order." What wasn't told was the story of the six people who died. The lack of investigation on the part of the police department, the FBI investigation of these events. It really sort of popped up for a few days and then went back underground.

Bevington: Sea, you address an elephant in the room right away which is that you're a white woman telling this story. How did you navigate race while telling the story through the podcast?

Stachura: I used a lot of input from community sources and from journalists of color. I did a lot of research on African American history - civil rights history in particular and on white supremacy and white fragility - getting at my own my own complacency, the sorts of questions that I may assume the answers to. So it took a really long time. We rewrote episode one, I'd say, four times. Because with each iteration we were understanding, "OK, we have the facts right but who are we choosing to tell this story?" It wasn't until the second episode that I realized I need to say who I am. I need to acknowledge to the listener that I am aware that I'm not going to tell this perfectly for everyone, that there are things I'm going to miss. And that we then added back into the first episode. It's been a really long process and I think for me very eye opening.

You can subscribe to "Shots In The Back: Exhuming the 1970 Augusta Riot" here. 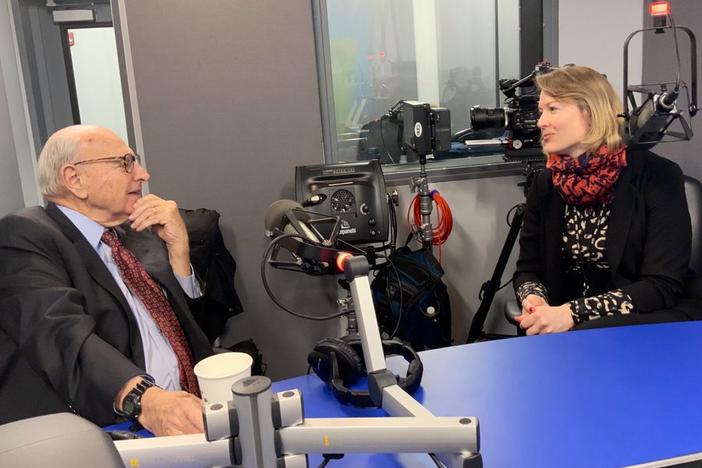 As members of the Foreign Service testified before the House Intelligence Committee earlier this month, a lot of Americans probably found themselves...