Georgians are again debating what to do with hundreds of public memorials to the Confederacy. It's a disagreement Georgians are accustomed to having.

In the 1990s Gov. Zell Miller was sued when he tried to remove the Confederate battle emblem from the state flag. A decade later, the state legislature removed it.  A few years ago, Gov. Nathan Deal quietly replaced “Confederate Memorial Day” with “State Holiday” on state employee memos.

Rickey Bevington: One of the first quandaries that you discovered in reporting out this story is: "What is the definition of a Confederate monument?"

Sarah Fay Campbell: It seems like it should be obvious. It's a statue to the Confederacy. But there can be a lot more than that. It can be a monument to someone who fought in the Civil War but did something else in their life later and that's why there's a monument to them. It could be a school. It could be a road name. They're all different.

Bevington: Many were erected or created decades after the Civil War ended in 1865. One historian you interviewed said that such memorials don't necessarily reflect the Civil War. They reflect the era in which they were created. What does that mean?

Campbell: Absolutely. Every single monument is different and needs to be considered based on when it was built and how people felt about it at the time. Some were built simply to honor the dead. Some were built in a way to respond to African Americans getting more rights or becoming more active. Some were built around the same time the [Ku Klux] Klan had a resurgence. A lot of them were built in the early 1900s which is around the time the NAACP was founded. Plessy vs Ferguson was a few years earlier. So it just really all depends on each and every monument, why they were built on what they mean.

Bevington: You also interviewed people who are against removing the monuments and memorials whom you don't think we're making it about race. They really wanted to preserve history. What did people tell you?

Campbell: They love their history. They think about their ancestors, that they've grown up in the South and they have a love for southern heritage. And I really, honestly think a lot of them don't feel it's as much about race as it truly is. There are certainly plenty of pro-monument people who are absolutely racist. But I tried to speak to people who are more thoughtful and that's not why they want to keep these monuments. They really feel that their history is being attacked. They feel people are trying to take away their history and cover it up. It's a real fear. It's something that surprised me when I was talking to some of the pro-monument people. One lady was very much opposed to monuments being torn down or removed or covered up or hidden away. But she actually thought moving it to the Confederate section of our cemetery would be great, that it would actually be better there because that would be a more appropriate place where it would be appreciated. One person I talked to said he would be happy to have it moved to the cemetery if that would lead to reconciliation. He just doesn't want it done out of vengeance. And I think that's a big concern. That they don't want it to be done out of vengeance. They don't want it to be trying to destroy their history. It scares them that they feel like their history is being attacked.

Bevington: You're a native Georgian. You attended Newnan High School. You say that your own thinking has evolved on this issue. So it sounds like you have some insight into multiple perspectives. Talk about that.

Campbell: Well, I was very much a Civil War buff as a child. When Zell Miller in the early 90s wanted to change the flag, I thought that was horrible. I was very much opposed to it. I even had a "Heritage Not Hate" bumper sticker because I didn't really understand. And then I grew up and I learned a lot more about history. I met a lot more people. I matured. And, you know, I understand now what those Confederate monuments mean to African Americans, to people who descended from enslaved people. I understand how they can walk down the street and they see that as an ever-present reminder of a time that people thought they were not even worth being counted as a full human. Everybody needs to understand their history a lot better than they do. Because if you don't understand what people went through during Jim Crow, you may think it was only about slavery. And there's more to it than that. People say, "I never owned slaves. Nobody alive was ever slave. So what are people upset about?" And they forget the 150 years’ worth of racism and legal oppression that followed the war. 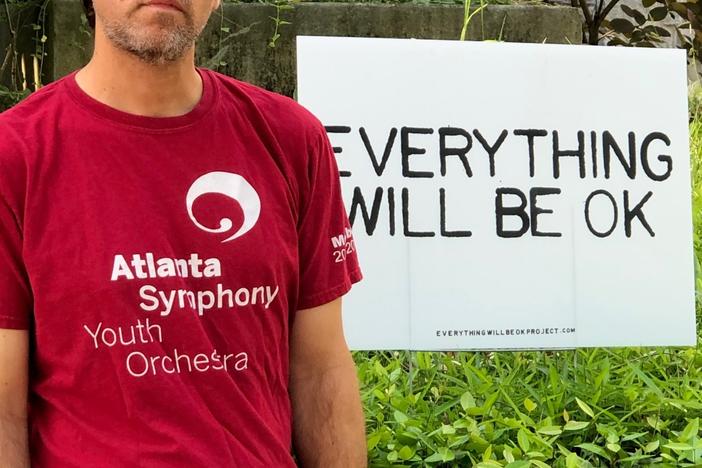 During A Pandemic, A Doctor's Spouse Feels Pride And Powerlessness

All Things Considered on Georgia Public Broadcasting is featuring the voices of people reflecting on what this time of the coronavirus and social...