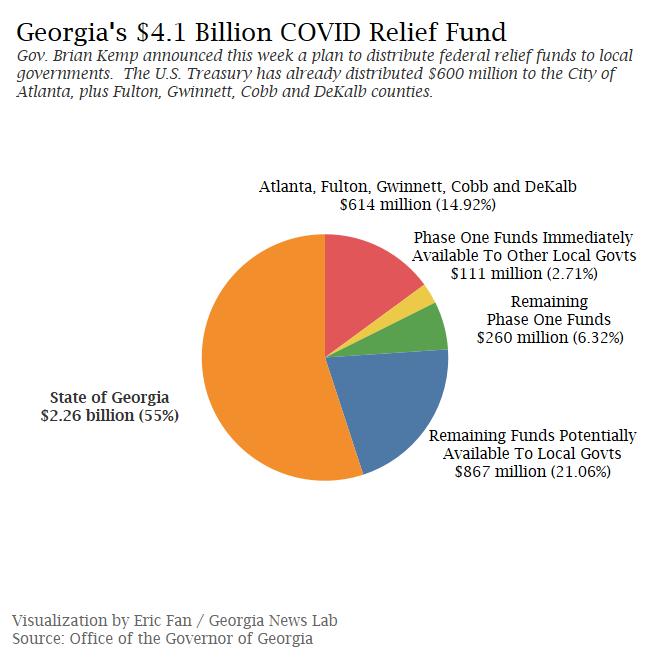 Georgia has received more than $4 billion in coronavirus relief. Some mayors say their cities aren't getting their fair share.

Mayors in two of Georgia’s most populous counties say their cities aren’t getting a fair share of federal relief money meant to help local governments cover unexpected expenses due to the COVID-19 pandemic.

Gov. Brian Kemp this week announced a plan to distribute up to 45% of the $4.1 billion in pandemic relief aid the U.S. Treasury Department allotted to Georgia in April.

Of that $1.8 billion, the federal government has already distributed $600 million directly to the City of Atlanta plus Fulton, Gwinnett, Cobb and DeKalb counties because of their population size.

The remaining $1.2 billion, Kemp announced Monday, will be distributed to all other cities and counties through an online application process.

In the first of an untold number of phases, the governor’s plan sets aside 30% of the $1.2 billion, or about $370 million, for the hundreds of local governments across the state.

Of that $370 million, 30% will be made available immediately to cover costs of combating the coronavirus. The remaining 70% of phase one money will be available as reimbursements.

All of the first phase funding must be used by Sept. 1 or it may be “recalled and reallocated for other uses.”

Kemp’s plan does not outline how the remaining $850 million set aside for local governments will be used beyond the initial phase, but said additional funding criteria would be developed “to ensure that there is flexibility to respond to the ongoing impact of the COVID-19 pandemic.”

For cities in the four metro counties that received direct funding from the federal government, the process is different.

That process has created anger and division in Fulton and DeKalb counties over what city leaders describe as a tug-of-war for federal relief aid. The mayor of Chamblee in DeKalb County went so far as to say his city was “screwed.”

Since the Treasury Department used total population — which includes cities — in deciding how much funding different jurisdictions receive, Kemp’s plan requires those cities to apply to their counties for assistance.

A press release announcing the plan stated that those counties are “encouraged to allocate funds to the cities within their borders on the same per capita basis” as the federal program.

It also emphasized that the funding should be distributed “equitably.”

A Tale Of Four Counties

Even before Kemp’s announcement Monday, Cobb and Gwinnett counties indicated a willingness to talk with cities about sharing a portion of their federal relief funds — $132 million and $163 million respectively.

Fulton and DeKalb, however, made no such commitments.

Fulton mayors have been asking since April for a share of the $104 million the county received in federal relief.

On April 29, the mayors of eight Fulton cities sent a letter to County Commission Chairman Robb Pitts, asking for half of the county’s federal allotment to pay for personal protective equipment, disinfect facilities and provide hazard pay for front line responders, among other unexpected expenses.

“To date our cities have yet to receive any funding on the federal, state or county level to offset the necessary expenditures related to the pandemic,” the mayors wrote. Sharing the money, they added, “would be an equitable way to alleviate some of the burdens our municipalities are facing.”

In a reply, Pitts directed the cities to seek reimbursement from the state. That option will not be open to them under Kemp’s plan.

In June, the Fulton County Commission twice considered a resolution that would allow cities to apply for reimbursement from a pot of $2.5 million, 2% of the county’s overall federal allocation. It has not been approved. However, Pitts said the county has asked cities for lists of items for which cities are requesting reimbursement.

Pitts said Tuesday morning he had not heard about the governor’s announcement until contacted by a Georgia News Lab reporter.

Pitts said he and the county’s legal counsel “had a different understanding about the expectation of counties that received direct funding.”

“The law as I understood did not require counties to provide any of its allocation to cities but it did not prohibit it either,” he said. “Our interpretation is what it is.”

The county has already committed 80% of the relief funds it received to county programs and it has designated the rest.

Fulton has allocated some of its money to county-wide programs such as COVID-19 testing, stockpiling personal protective gear, delivering meals for seniors, assistance to the homeless population and creating small business loan programs, Pitts said Friday.

Pitts said he wasn’t sure how much the county had spent so far.

Fulton cities, though benefitting from county services, were not individually considered in the county’s plan despite outcry from mayors.

Under Kemp’s plan, cities in Fulton cannot ask the state for reimbursement, and what money is left in the county’s allotment would not compare to what other cities outside the metro area can expect.

Some of the county’s mayors highlight the fact that Fulton’s federal allocation is based on population — almost all of which resides in cities, with less than 1,000 people in unincorporated areas.

East Point Mayor Deana Ingraham emphasized that the cities’ populations were the basis on which the Treasury calculated Fulton’s per-capita allotment. She and her fellow mayors say they want to see cities get an “equitable” share of the relief funds.

“This is a life or death pandemic,” she said. “We're talking about whether or not people live, whether or not our health-care system is able to respond to the needs and whether or not we can make sure that we're doing things to ensure the health, welfare and safety of our residents.”

In DeKalb County, officials have allocated most of the county’s $125 million in relief funds to countywide initiatives such as food insecurity and mental health programs.

“The initiatives that have been undertaken have been county-wide issues that we believe benefit all of our citizens,” Thurmond said Friday. “The DeKalb Board of Health serves all DeKalb citizens irrespective of whether you live in incorporated or unincorporated.”

The county has not announced any further plan to make money available to its cities. Thurmond did not respond to messages requesting comment after the governor’s plan was announced.

Mayor Eric Clarkson of Chamblee in DeKalb County said it initially seemed county leaders were open to negotiating sharing money with cities, but so far the county has only offered to help with personal protective equipment expenses.

“The money was distributed, and we haven't seen a dime of it,” Clarkson said. “We’re screwed."

The experience has been quite different for mayors in Gwinnett and Cobb counties. Both have developed plans to share relief money with cities.

Gwinnett County designated $10 million of its $163 million federal allocation for cities at first. Then, on June 2, the board agreed to allow for increases depending on how much cities request in reimbursements.

“We have been working with our cities for the past two weeks defining our reimbursement process to assist them in their pending submissions,” Gwinnett County spokesman Joe Sorenson said in a statement. “The cities are actively preparing their reimbursement packages, but to date none have been received. However, we anticipate seeing requests for eligible public health, payroll and essential services expenses related to the COVID-19 pandemic.”

Like the other direct-recipient counties, Cobb plans to reimburse cities for COVID-19 expenses such as personal protective equipment. However, Commission Chair Mike Boyce says the county plans to do more to take care of cities.

Boyce said he heard informally that Kemp would require cities to seek money from their respective counties. So, Cobb planned its allocations with that in mind.

Of the $132 million in federal aid Cobb received, it has allocated $50 million to a small business grant program, $1.6 million to a rental relief program and $1 million to an emergency food assistance program as well as $1.7 million to the county the board of health and about $1.8 million for protective equipment.

As of mid-June, Cobb had spent about $1.5 million of its relief funds, mostly on PPE, sanitizer and emergency equipment.

With a hefty reserve on hand, county leaders will be negotiating with city leaders on how further needs might be addressed.

Clint Mueller, legislative director for the Association County Commissioners of Georgia, said details laid out in the governor’s announcement regarding the four metro Atlanta counties makes for an even stronger case for cities seeking funding from the counties.

“They’re going to have to decide now if they want to share some of their funds with the cities within their counties,” he said shortly after the governor’s announcement. “Obviously, there will be a whole lot more political pressure for them to do it now because they are now the only alternative those cities have for getting funds.”

Laura Corley is deputy editor for the Georgia News Lab. David Armstrong is executive editor. Ada Wood and Nicole Sadek are reporters with the News Lab. Stephen Fowler is Politics reporter for GPB News. The News Lab is an investigative reporting partnership between Georgia universities, Georgia Public Broadcasting, The Atlanta Journal-Constitution and WSB-TV. This reporting is funded in part by the Democracy Fund. 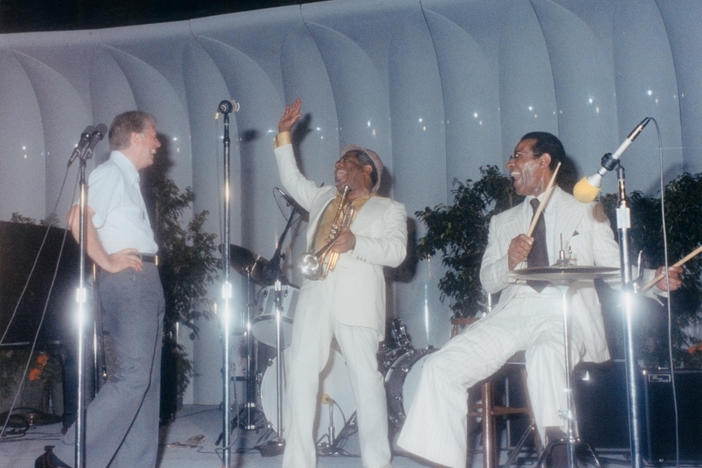