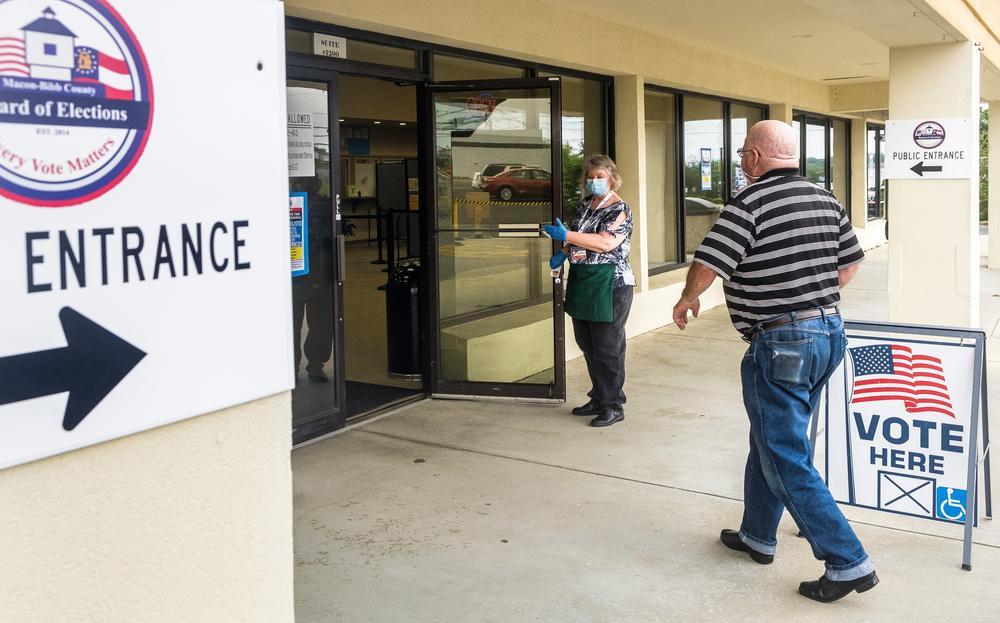 Georgians planning to vote in person next week for the June 9 primary could face long wait times - and not just because of the coronavirus. / GPB News

Georgians planning to vote in person next week for the June 9 primary could face long wait times – and not just because of the coronavirus.

A surge in the state’s voter rolls over the past decade, combined with poll closures or consolidations due to the removal of federal oversight of polling changes is now exacerbated by last-minute poll closures, relocations and social distancing measures.

According to a February report from the secretary of state’s office, 2,377 polling places were slated to open across Georgia for the presidential primary in March.

Next week, there will be nearly 80 fewer places to vote in the greater metro Atlanta area, home to the bulk of the state’s voting population and largest minority communities.

Statewide, more than 10% of polling places have been relocated since the pandemic.

The result: Nearly 16,000 active registered voters from those five precincts are assigned to vote at Park Tavern, a restaurant and event space at the edge of Piedmont Park.

The average size of a voting precinct in Georgia is about 2,600 people.

While not every voter will cast a ballot there on the primary day, even a fraction of that number could result in logjams at the polls, particularly because of health precautions in place to protect voters.

A combined 8,000 residents of Grant Park, Summerhill and Mechanicsville are slated to vote at the long-closed FanPlex adjacent to the Georgia State stadium after their original three locations became unavailable.

Fulton has approved emergency voting location changes for about a fifth of the 198 polls originally planned for June 9. As a consequence, about a third of the county’s voters could cast their ballots at an unfamiliar location.

Senior centers, schools and churches that were expected to be used as polls for the primary election have since become unavailable because of COVID-19 concerns and renovations.

All told, the county lists 45 polling places that have been moved, in some cases consolidating already-large precincts into polling locations that serve more than 10,000 residents.

A GPB News/Georgia News Lab analysis found that before the pandemic, churches, schools and other private buildings made up 62% of the planned polling places in the state.  The reliance on non-public polling locations is most prominent in Metro Atlanta.

Even a small number of voters at the polls can lead to a long line, elections officials and voting rights groups say.

MORE: Georgia Secretary Of State Says Shortest Line To Vote Is ‘At Your Kitchen Table’

During the first day of early voting in Fulton County, wait times topping two hours were reported with around 600 total voters, prompting the county to expand hours and shift to larger spaces within the polling places.

“The longest lines that we’ve seen in Fulton County were at C.T. Martin and South Fulton,” Cindy Battles, program coordinator with nonprofit Common Cause Georgia said. “There were 20 people ahead of me [at C.T. Martin] and I waited in line for an hour to vote.”

“I don’t know that someone deliberately set up the system so that it would disproportionately impact people of color,” she said. “But a lot of decisions that we make wind up impacting lower-income communities and people of color simply because of the way the system works.”

The decision to add or subtract polling places is made at the county level, especially since Shelby V. Holder, a 2013 U.S. Supreme Court ruling that removed federal oversight from alterations to elections made by some jurisdictions, including Georgia.

In the years since, 10 counties around Atlanta have added more than a million voters to the rolls, about half of all the new voters registered in the state. Yet six of those 10 counties have eliminated nearly 10% of their polling places since 2013.

For the June 9 election, DeKalb County alone is consolidating more than 20 polls because of the virus.

Two precinct consolidations in Doraville now mean 9,300 active voters — the majority of them non- white — are temporarily assigned to vote at a single location.

The increased burden on polling places is not limited to counties that have fewer voting locations. Gwinnett County has added nearly 170,000 active registered voters since 2012 without increasing its 156 polling places.

In the hotly-contested 2018 governor’s race, a federal judge ordered the Annistown Elementary School precinct near Snellville to stay open until 9:25 p.m. after technical issues with the check-in system led to some voters waiting upwards of three hours in line before casting their ballots, the AJC previously reported.

That majority-black precinct has grown nearly 50% since 2012, and currently has about 4,000 active registered voters assigned to vote there.

Seven of Gwinnett County’s 156 precincts have more than 6,000 active registered voters. All but one of the seven have polls in majority non-white areas of Dacula, Duluth, Lawrenceville and Loganville.

Gwinnett County’s burgeoning population has shifted registered voter demographics from 55% white to 40% white since 2012, according to data from the secretary of state’s office.

Saira Draper, voter protection director with the Democratic Party of Georgia, said that having  fewer places to vote in the June primary because of COVID-19 has been made worse by more than 200 polling place closures since 2013.

“Closures have caused unacceptably long lines and voter confusion,” she said. “Unsurprisingly, a significant portion of the polling places that have closed post-Shelby are in impoverished areas with significant African American populations.”

Even though nearly 800,000 of the record 1.5 million absentee ballots requested have been returned by voters a week before the election, Draper said she has heard from hundreds of voters who never received their ballot and will likely have to vote in person.

“Most frustratingly, we anticipated this problem months ago, but the counties and Secretary of State failed to plan,” she said. “We need to take action now to ensure enough polling places next week, but also in August and November, and the state needs to take measures to further expand vote by mail access.”

Republican Secretary of State Brad Raffensperger has urged Georgians to vote by mail in this election, sending out applications to 6.9 million active registered voters in an effort to make casting a ballot from home easier.

Raffensperger postponed the March 24 presidential primary and the May 19 general primary election to June 9 out of concern for poll workers and voters because of the coronavirus.

At a press conference last week, he acknowledged that not everyone can or will vote by mail, and said that voters should expect things to look different if they do show up to vote in person.

For one, poll workers will be wearing masks and gloves and will sanitize voting equipment periodically throughout the day. Other coronavirus precautions will also add more time to the voting process.

“They also will have you spaced in a line that is 6 feet apart — so a 60-foot line is really just 10 voters, but normally that'd be 20-30 voters,” Raffensperger said.

“We encourage the 800,000 voters who have their absentee ballots to turn them in ASAP,” he said.

To be counted, ballots must be received by the time polls close at 7 p.m. on election day.

The primary will be the first statewide test of Georgia’s new $104 million ballot-marking device voting system that prints out a paper record of your vote that is then inserted into a scanner.

It also could serve as a preview for November’s general election, where state officials plan for record-high voter registration and as many as 5 million Georgians casting their ballots.

Battles, the program coordinator with Common Cause Georgia, said the record number of Georgians on the state’s voter rolls is not an accomplishment unless elections officials can ensure there are adequate places to vote.

“You can brag that you’ve registered people to vote, but you’re not enabling them to cast that vote,” she said. “They’re not doing the things that they need to do to [make] sure voting is easier for those people.”

Some counties took steps to address explosive growth in voter registration totals before the pandemic hit.

Forsyth County added five new polling places in late 2019 to accommodate growth of nearly 60% in total registered voters over the past decade.

Even so, five of the county’s 20 precincts contain more than 10,000 registered voters, and the smallest precinct — which votes at the Olde Atlanta clubhouse in Suwanee — is still 15% larger than the average precinct size in the state.

During the monthly board of elections meeting Tuesday, Forsyth elections director Mandi Smith said all election day voting locations would be open, though the county is down about half of the 300 poll workers that were trained for the election.

“We've had many challenges lately with everything going on,” Smith said. “To be very frank, people are dropping out every day.”

Still, Smith said there will be enough poll workers to staff each precinct.

Ninety percent of Georgia’s 159 counties have fewer than two dozen polling places. Many rely on city- or county-owned buildings, but in larger metro areas it can be harder to find suitable locations that can logistically handle enough voting machines, voters and staff.

Fulton Elections Director Rick Barron said that’s how thousands of residents ended up being moved from a church to a high school to Park Tavern in Atlanta.

“If we don't have any schools nearby or any churches that are willing to have us, we need to look for some kind of meeting hall or large facility with parking available,” he said.

All but two of the changes made this election are because of the coronavirus, and Barron said Fulton typically offers more early voting options than the three next largest counties combined.

Elections administrators are wary of the coronavirus’ impact on in-person voting and processing of the record number of mail-in ballots, something Barron and his team can attest to first-hand.

In April, the Fulton elections office was closed for several days after one staff member died from COVID-19 and another was briefly hospitalized, putting Georgia’s most populous county weeks behind in handling absentee applications for the primary.

Election offices and voting locations in Appling, Bacon and McDuffie Counties have been temporarily shuttered in recent weeks as a voter, a poll worker and two staff members tested positive, respectively.

Early voting ends Friday, June 5. Absentee ballots must be received by your county elections office or placed in an approved drop box by 7 p.m. Tuesday, June 9 when polls close.

This story is part of an ongoing investigation by The Atlanta Journal-Constitution, GPB News and the Georgia News Lab. The News Lab is an investigative reporting partnership between Georgia universities, Georgia Public Broadcasting, The Atlanta Journal-Constitution and WSB-TV. Nicole Sadek and Ada Wood are reporters with the News Lab. Stephen Fowler is the political reporter for GPB News. News Lab Deputy Editor Laura Corley also contributed reporting for this story. News Lab reporter Eric Fan provided data analysis. This reporting is funded in part by the Democracy Fund. 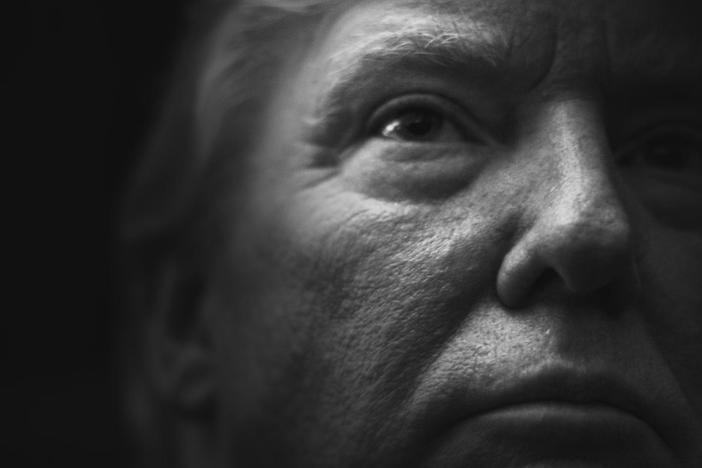