Who Is Omar Jimenez, The CNN Reporter Arrested While Covering Minneapolis Protests? 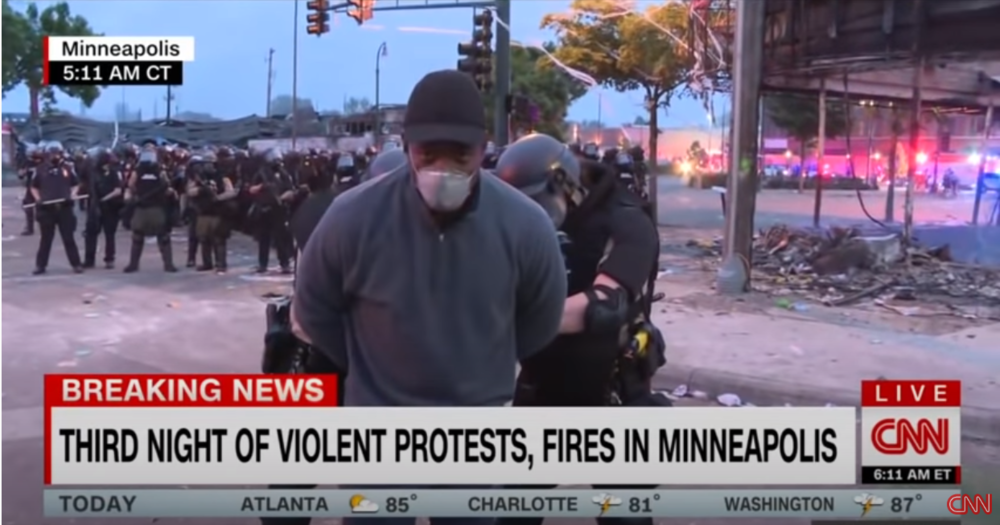 This image from video posted on YouTube Friday, May 29, 2020, purports to show the arrest of CNN journalist Omar Jimenez.

Omar Jimenez was documenting history when he became a part of it. He was arrested as he covered overnight, violent protests in Minneapolis. He has since been released.

Jimenez, who grew up in Kennesaw, is African American and Latino. He was taken into police custody with two other Cable News Network employees, according to the company.

Protestors have taken to the streets of Minneapolis for the past three nights following the death of George Floyd, a black man whose arresting officer was recorded kneeling on his neck for several minutes. Four officers have been fired and the incident is under federal investigation, but demonstrators are seeking arrests and charges of the officers.

Police arrested Jimenez  Friday shortly after 6 a.m. during a live CNN broadcast after he identified himself to officers. Jimenez’s mother, Dr. Jayne Morgan, a cardiologist with Piedmont Healthcare, said she saw the ending of the arrest as it happened live on TV. “My mind was having a hard time processing,” Morgan said. “But it was what my eyes were seeing. I was thinking, ‘is that Omar?”

There can only be one MVP in all of our lives and chances are it’s a mom. Happy Mother’s Day to a mom that’s way cooler than I’ll ever be and cheers to all the MVPs out there making the world go round. The last pic sums it all up. #MVP #MothersDay #HappyMothersDay #ATL

Morgan said she briefly spoke with her son after the incident and he seems to be physically fine. She said she has always been proud of his outstanding character, which started at an early age. Jimenez was born in Worchester, Massachusetts but spent most of his life in Kennesaw - just outside of Atlanta. He attended Kennesaw Mountain High School and played on the varsity basketball team for three years.

Jimenez also played basketball at Northwestern University and acted in several school plays. The 26-year-old graduated from the Medill School of Journalism at Northwestern University with a 4.23 GPA. He worked with the Chicago Innocence Project where he investigated potential wrongful convictions alongside other journalism and law students from across Chicago. Jimenez has been with CNN since 2017, starting with the company’s affiliate service, CNN Newsource in Washington D.C.

Jimenez raps under the pseudonym, “OJ Tropicana” and recently released new music. He even won a rap competition on NBC’s Late Night with Jimmy Fallon.

Morgan said this has been an unseen time as President Donald Trump threatened to send the National guard to Minneapolis.

“With these repeated incidents, it’s unclear if we are in 1960 or 2020,” Morgan said. “And with the video being available, we can see these issues are still going on.”

In the course of clearing the streets and restoring order at Lake Street and Snelling Avenue, four people were arrested by State Patrol troopers, including three members of a CNN crew. The three were released once they were confirmed to be members of the media.— MN State Patrol (@MnDPS_MSP) May 29, 2020

Another CNN journalist, Josh Campbell, was also covering the protests in Minneapolis. He was not taken into custody.

CNN reporter Omar Jimenez, who is black and Latino, and his team were arrested by officers early this morning in Minneapolis. Not far away, CNN journalist Josh Campbell, who is white, says he was "treated much differently." https://t.co/1ZpqdyJON2 pic.twitter.com/vPFLTx8UnK— CNN (@CNN) May 29, 2020

Protests are planned in Atlanta for this afternoon at 3 p.m. Participants will march to bring awareness and show solidarity with the people protesting in Minneapolis.