Coronavirus Poses Added Challenges To Homeless Georgians, Those Who Serve Them 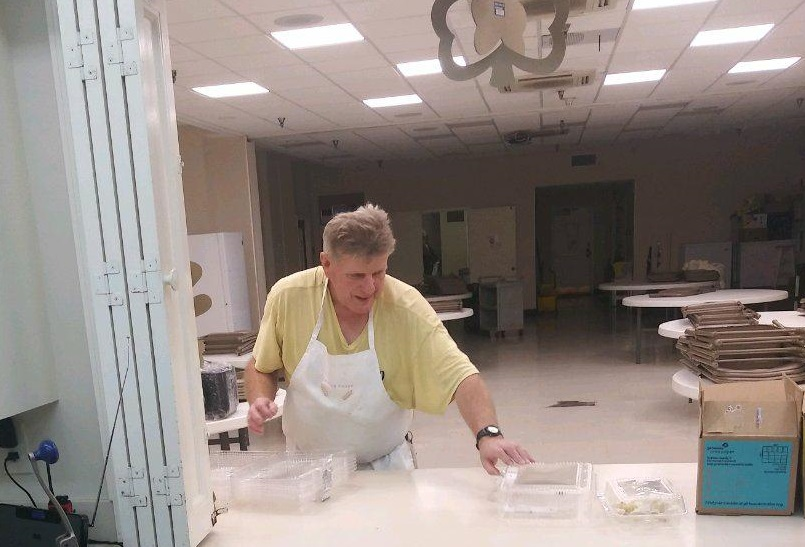 Caption
Emmaus House Clinic Supervisor Wayne Harden packages meals in to-go containers. The soup kitchen is serving meals to-go instead of in their dining hall to help stop the spread of coronavirus.

Every day, Emmaus House in Downtown Savannah feeds warm meals to around 150 people in their dining hall. Volunteers help serve them, and everyone who arrives for a meal gets one. But that process looks a little different these days.

“We just hand out these bags through our kitchen door. And that way we don't have clients inside,” said Ariana Berksteiner, the soup kitchen’s executive director.

Much of the advice to stop coronavirus, such as avoiding others, washing hands and sanitizing surfaces, might be tough to follow for those who don’t have homes or rely on services like soup kitchens. On top of that, outreach groups like Emmhaus House are feeling the strain of supply shortages and strict health precautions.GPB's Emily Jones reports on how Savannah's homeless community and the providers who serve them are coping with coronavirus.

Berksteiner has asked volunteers to stay home to keep people safe from the spreading coronavirus. But she’s still worried about the clients waiting in line for food.

“At the end of the day, they're outside standing in line and they're still gathering. And the question is, do I stop feeding people so that they can socially distance themselves or and what outcome is like the worst of the two?” Berksteiner said. “I don't want to not feed people, but I also don't want to, like, make them susceptible to something.”

Other groups helping Savannahians who don’t have homes or access to food are in a similar boat. Most are working without volunteers and dealing with shortages of important supplies.

“We are out of hand sanitizer just about everywhere,” said Cindy Kelley, who directs the Chatham-Savannah Authority for the Homeless. “And I know that people hoarded it and took a lot of it. And it is something that we have routinely distributed, but we don't have any right now. And many of the other programs do not have it either.”

Hand sanitizer is especially important for people who are homeless because they don’t have easy access to a sink to wash their hands. Service providers are asking people to donate things like sanitizer, toilet paper, masks, and gloves, or donate money so that groups can buy supplies themselves.

Helping out also goes beyond physical needs, according to Rev. Michael Chaney, who works with a congregation in one of Savannah’s homeless camps.

“We can certainly donate nonperishable food and health care products, but we can also take care of one another kind of emotionally. And I think we're seeing a lot of that in the camps,” Chaney said.

He’s encouraging people to build community even if it’s from a distance, for instance by sending a note of support to homeless neighbors. Chaney said there are groups like his in most places that would be happy to deliver them.

The need for these kinds of services and support is only likely to increase in the coming weeks, Savannah Mayor Van Johnson acknowledged at a press briefing earlier this week.

“We need to make sure that there is a plan for our most vulnerable citizens. Not only the chronically homeless, but also transitionally homeless and those who might become homeless as a result of these extraordinary times that we’re going through,” Johnson said.

Emmaus House is prepared to feed more people than normal as the virus slows down business and folks lose jobs and wages, Berksteiner said.

Service providers also are discussing how and where to set up a quarantine facility in case many people in Savannah end up with the virus, Kelley with the Homeless Authority said. If it reaches the homeless population, it will likely spread quickly.

Local leaders agreed coronavirus has put a spotlight on the inequalities in our system, and they hope that will lead to some solutions. Chaney is already looking beyond the current crisis.

“I think that things can change for the positive after this.”