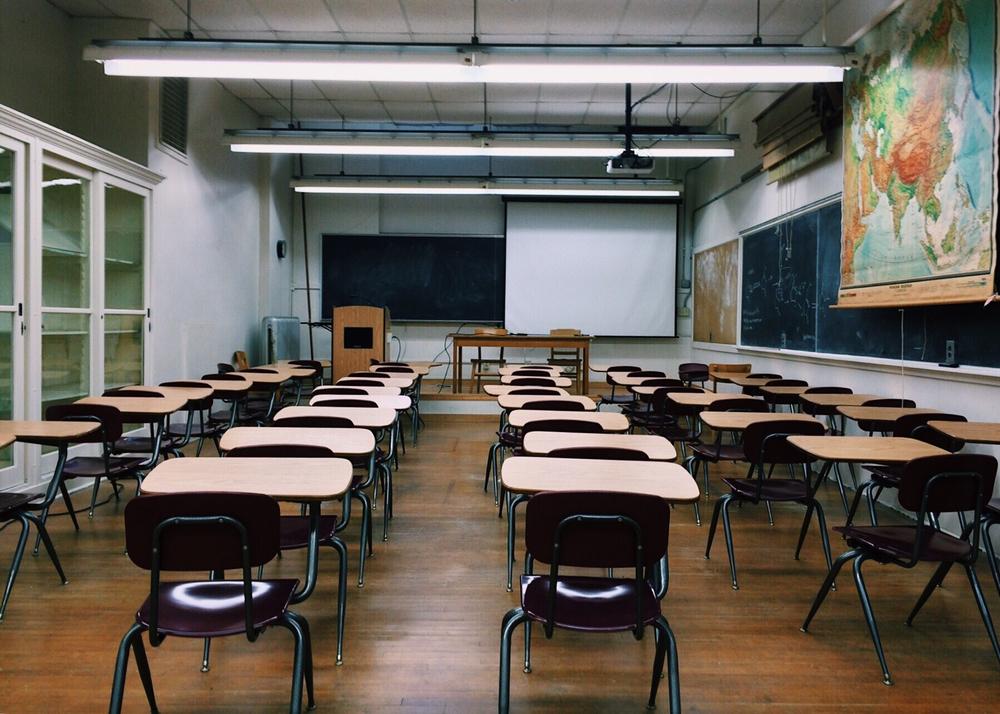 Desks sit empty in a classroom.

As schools in Grady County closed temporarily amid the outbreak of the coronavirus in March, Superintendent Kermit Gilliard asked teachers to reach out to parents with four questions.

Was there internet access in the home, they asked the parents of approximately 4,600 students in the school district. Is there a device in the home, a laptop or iPad maybe, the teachers asked in the rural county on the Florida-Georgia border. Did cell phones work at home or were they out of service range, in case the county was able to place a wi-fi hotspot nearby?

“And the fourth one, which is very basic, what is your current address?” Gilliard listed out.

One-fifth of the county lives below the poverty level, many of them, at times, switching homes at the end of the month when they are unable to pay rent, making it difficult to track down parents and children in these especially strange times with school updates, he explained.

Nearly the same number of households don’t have a computer in their homes, according to the latest census data, and more than 2,700 homes have no access to the internet.

“We have a double problem," he said. "Not only do we have some kids with no devices and we as a system have not provided one-to-one yet. And then we have 25% of our population that their cell phones don't work at home. And some of the people probably couldn't afford the internet,” Gilliard said.

More than a dozen of Georgia’s rural southwest counties encapsulate large swathes of farmland, empty stretches of fields where internet lines don’t run near homes, leaving thousands of homes without access to the internet. At a time where more than 40 states, including Georgia, have ordered school closures for the academic year, the lack of access to a virtual e-learning school system could prove to be devastating to thousands of students in a state already behind in math, science and reading compared to national levels.

The 15 superintendents under his region in the southwest, overseeing more than 52,000 students, are well aware of the issues, said Tim Helms, executive director of the southwest Georgia Regional Educational Service Directory, as he drove through Mitchell County Friday morning. “There are cornfields being plowed, right now, as far as the eye can see,” Helms said, nowhere for an internet cable below ground in sight.

One of those superintendents under Helms is Gilliard. But, they are dealing with a complex layer of problems that have led to these issues, as well as unintended consequences of the coronavirus.

“They can't get connectivity, all right,” he conceded, adding, “But a superintendent I was just talking to was saying ‘Tim, I'm just trying to get some hand sanitizer en masse for my kids. I can’t even do that.”

Georgia has the third largest population of rural students after Texas and North Carolina, according to a 2019 report from the Rural School and Community Trust, and “student achievement in rural areas is low (well below the performance in non-rural areas).”

Inequality is rife in many of these communities, exacerbated as coronavirus wreaks destruction on the state’s economy, leaving thousands unemployed with households scrambling to feed their children. Now, families face the added stress of providing education to their children at home, experts say.

The transition was not seamless.

All of a sudden kids are at home and parents are at home, with educators scrambling to plan one hour at a time to help their students. “Then it became the next day, the next week and so forth,” he added, which has only been exacerbated in our low-income in our rural area schools where there might only be one computer in one home for an entire family as everyone is stuck working from their homes.

“And so, digital learning, I do think it's a great idea,” Pruitt conceded. “It's definitely the place we should be going but it also really does exacerbate that digital divide.” He calls it the Covid Slide, something akin to the well-known Summer Slide among teachers, the fear students forget most of what they’ve learned during the year while on extended school breaks.

Helms also worries there are some things a child just can’t be taught in a Zoom class.

“You've got a kindergarten teacher that needs to be teaching your child how to hold a pencil,” he offered as an example.

But that’s just one small problem now, notes RESA’s Helms, and even before coronavirus, there were so many structural and systemic inequalities in these communities in the first place, and some they cannot even control.

Down in Grady county, where Gilliard is the superintendent, students missed a handful of weeks in 2018 and 2019 after Hurricane Michael hit, ravaging a number of rural, agricultural towns near the Florida-Georgia state line.

It becomes nearly impossible for the school system to continue teaching, in an already difficult learning environment when they are not certain their home might still stand, Helms adds, or if they don’t know the source of their next meal.

Just an hour north of Gilliard’s district, Early County Superintendent Dr. Bronwyn Ragan-Martin worries about her students, who face some, if not more, of the issues Grady County is seeing with online access-and not just in regard to education.

The district is in the process of registering families for Baylor University’s Meals-to-You programs after early coronavirus cases in the county shut down the school district’s meals disbursement. But even trying to register people for meals has its limitations.

“Of course, the way you register is online,” the superintendent continued, because 63% of the county is unserved when it comes to broadband access. In Grady county, Gilliard’s school district coordinates food pick-ups for students, serving 20,000 breakfast and meals over the first two weeks by posting the information on the district’s social media for visibility. That’s how information spreads in their communities when there is available access to the internet, he said.

Food insecurity among a quarter of the 2,000 children in Early equals Grady’s level of insecurity. Every single school-age child receives a free lunch across Early County, Ragan-Martin said, but meal distribution stopped early on when cases were confirmed in March.

“We’re hearing from our superintendents, it’s the Maslow pyramid of needs, saying, ‘We’ve got to feed these kids," Pruitt said. "We’ve got to make sure they feel secure, that they're healthy.”

On top of that, the majority African American county is rife with generational poverty, Ragan-Martin explained, which has created a wealth gap among white and black populations.

Ragan-Martin’s teachers are trying to find a workaround to reach families by creating drop box areas around town to return paper packets of homework but still struggle to communicate regularly with students, frustrating all parties.

“Teachers need to provide that feedback,” she said. “Even though some are able to do that via Zoom, or the Google Classroom platform, it's still not like being in the classroom like here let me show you what you're doing wrong with this problem."

Farther up north toward Atlanta, another superintendent worries about that scenario, too, especially as entire families continue about their day from their homes. With each member of a family focused on their priorities, schedules aren’t working around a conventional school day.

Teachers need office hours spread out through the day, suggested Dr. Curtis Jones, superintendent of Bibb County Schools, with class schedules similar to college, at least in this pandemic.

“I think we learned that you can't do six or seven classes in one day,” Jones said.

On top of that, there is no way for teachers to truly monitor who is doing the classwork.

“We also learned that in some cases parents were doing the work, not necessarily the children. And so, that led to some other problems as well. Teachers trying to teach it with one method, parents learned something different,” Jones said.

If teaching their own children, in addition to working full time, many of  those parents will have to leave their home, sitting in their car with their children near a hot spot in town to make sure they can take a virtual class or pick up their next assignment online.

Grady’s public library is placing some of those around town, Gilliard said.

“I just can't imagine sitting in a parking lot with my 15-year-old while they work on a laptop," Gilliard said. "We would kill each other.”

Imagine 10 cars pulled up around one hub, he asks, wondering about one of the towns in the county with 300 people. There’s a caution light, a general merchandise store that sells gas and a post office.

“So I guess at night, people just park around the post office building?” he asked, answering his own question.

But even before children were at home, now at times learning alongside their parents, inequality was already evident. Gillard points out that for the two Advanced Placement courses offered in the Grady school district, English and calculus, one of the prerequisites was having internet at home.

This might be a chance, among the global pandemic, to regulate so many of these inequalities.

“Even before COVID-19, we knew that we needed to get there," Helms said. "So maybe this is somewhat of a silver lining for educators, that we've got to learn to do it a different way.”

They may have that time now as schools face the prospect of not being able to return to traditional classrooms in the fall.

In Grady, understanding there might be a potential delay in the school year this August, as the coronavirus makes its way back through communities, Gilliard has spoken to a number of superintendents nationwide. Many of them are putting contingency plans in place, especially as social distancing continues throughout the year.

What the district hopes to do with the money from the Coronavirus Aid, Relief and Economic Security Act is to purchase enough tablets, laptops and iPads for students.

With homes equipped with electronics, Gilliard plans to pass out jump drives, instead of paper packets, by the next calendar school year.

Eight weeks ago, the world wasn’t thinking about online classes for our kindergartners but now, the way the world’s children are educated has forever changed, Pruitt said, as he monitored progress in 16 states, including Georgia.

“The reality is, because of how fast things like COVID forces the economy to change, you can't afford to plan for the Jetsons by thinking like the Flintstones.” 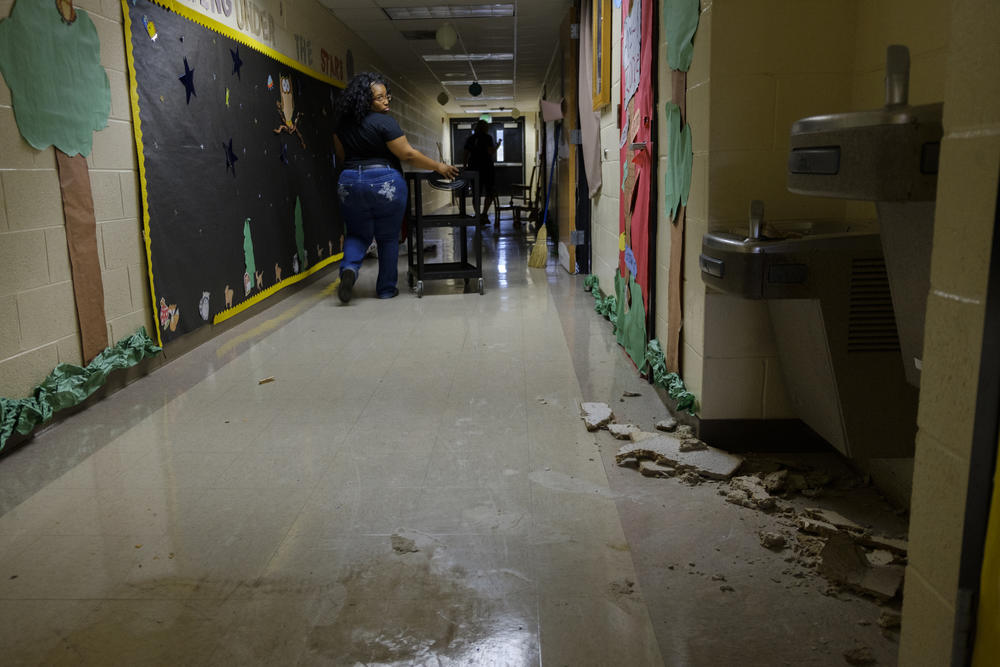 Pre-kindergarten teacher Jessica Beard looks back at some of the damage made by Hurricane Michael to the hall where she has her class at Potter Street Elementary School in Bainbridge. Students in Decatur County missed a week of school because of the storm.