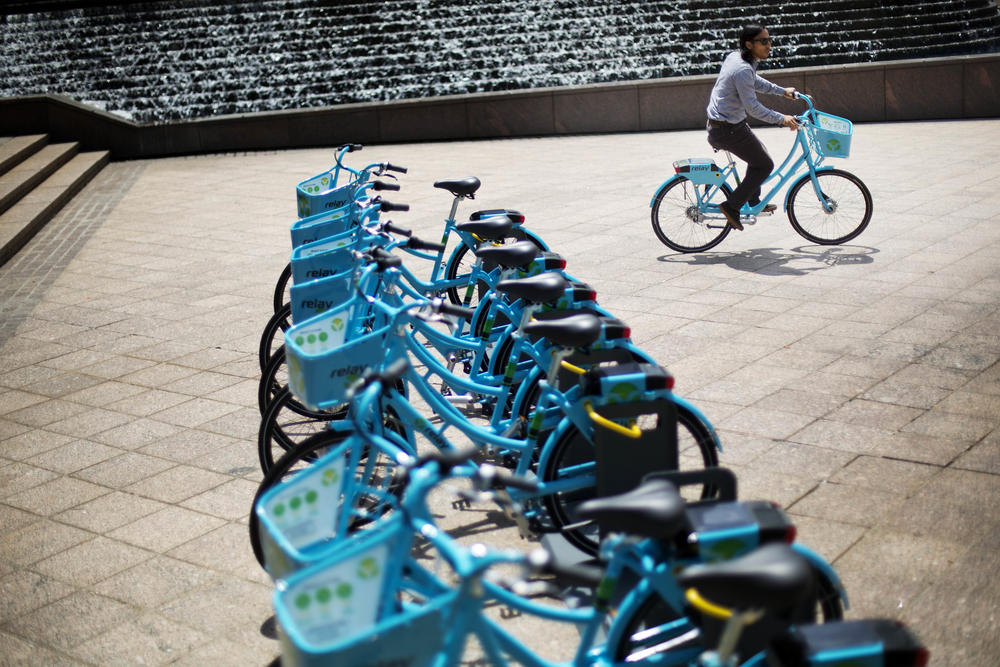 Atlanta plans to triple existing bike lanes in the city.

Whether you live in the city of Atlanta, commute to work there or only pass through occasionally, getting around Atlanta can be a hassle.

Atlanta Mayor Keisha Lance Bottoms talked about redesigning how Atlanta moves people through its streets during our monthly Ask The Mayor show with GPB's All Things Considered Host, Rickey Bevington.

Rickey Bevington: We have so many transportation questions to ask you, but I'm going to go with Roby Greenwald, who's assistant professor of Georgia State University's School of Public Health, who asked, from a public health perspective: "Will this city increase support for transportation alternatives in a meaningful way?"

Here's I think, the most interesting thing about this question," ... so that we can finally break the cycle of each new resident adding one more car to an overcapacity network."

I think what he's asking is, should Atlanta try to become a city where you don't actually need a car?

Will the city increase support for transportation alternatives in a meaningful way so that we can finally break the cycle of each new resident adding one more car to an over-capacity network?— Roby Greenwald (@RobyGreenwald) September 6, 2019

Keisha Lance Bottoms: I think that is the goal, but I also think that it will require something much bigger than addressing a transportation network. We have to look at people who are coming in from other parts of the Metro area to work inside of the city, primarily because they can't afford to live in the city.

Is the city building complete streets with bike lanes anytime soon? Or are they just gonna force scooter and bike riders to mingle with car traffic and fear for their lives?— Mayor of Buckhead (@MayorOfBuckhead) August 6, 2019

Bottoms: We are. So we have a very aggressive plan, a plan to improve 20 corridors within the city. I actually have some stats that I wrote down on that, so I want to make sure that I got it right. It's the Action Plan for Safer Streets. In two years, $5 million worth of investments to 20 corridors, and you'll start to see pop-up lanes throughout the city.

You have probably started to see them already because we can't wait for the permanent infrastructure. We want to make sure that we have safer streets now. Hopefully, people are already using these pop-up bike lanes and walking lanes, and they are starting to see and feel that our streets are safer.

Where will the city provide dedicated right-of-way for transit services (e.g. buses)? How does the city plan to work with MARTA to create a reliable transit system?— Dave Ederer (@DaveEderer) September 6, 2019

Bottoms: We'll do it throughout the city, and we are looking at a number of our bus routes, and they have not been comprehensively examined in decades. So we are actually working on that now, along with MARTA, to take a look at our bus routes and to make sure that we have dedicated lanes for these rapid bus transit systems. It's a part of really in so many ways reimagining who we are as a city.

In so many ways, Atlanta still operates as if it's a small town when we know that's not the case anymore. It's not just about connecting people within the city. It's about getting people in and out of our city. We are a population of around 500,000 people by night. We swell to over a million by day.

Bevington: Do you get pushback from drivers, though, who say, "We only have so much space to get where we're going, and you're taking away one whole lane for buses?"

Bottoms: We do. [It's] something that I'm mindful of because I live in the Cascade area of town, just outside the perimeter. Even if I wanted to take the bus or rail into the city today, it's not practical for me to do it. To get to my closest bus stop, I would have to walk a mile, and I don't have sidewalk connectivity. Now, people do it every day because they have to. But what we want to make sure is that there are people who have options, like me, can also have the ease and safety of getting to a bus stop and then getting on transit.

I'm mindful that people who live in the city don't always recognize how challenging it is for people who live outside of these connected railways and roadways to access the city.

Change is difficult. Change is always difficult, but it's necessary.  I think that as we continue to make the changes, then people will began to use these lanes and we'll see that it's for the good for the long term.