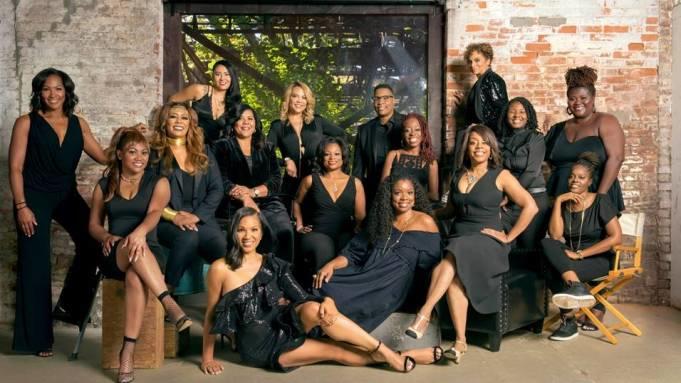 Caption
The 20 creators of Reel Divas.

The Reel Divas is an initiative created to promote the talents of African American writers, producers and directors within the city of Atlanta.

While based in the Peach State, the organization is co-founded by a handful of Hollywood names, including actresses Jasmine Guy (A Different World) and Terri J. Vaughn (The Steve Harvey Show).

Women behind the camera, such as producers Dianne Ashford of the Atlanta-based television series Ambitions and Tamra Simmons of the Emmy-nominated documentary Surviving R. Kelly, serve as co- founders as well.

"We are here to advocate for producers, writers and directors that are often overlooked," said Cas Sigers-Beedles, co-founder of the group.

"The women in our group have over 10 years of real experience and yet the challenges of being a woman of color in the enertainment industry, especially in the South, are lofty."

The introduction of the Divas comes soon after the grand opening of Tyler Perry Studios, the 330-acre, 12 soundstage lot owned by mogul Tyler Perry. The acquisition made Perry the first African American to own a major movie studio.

Along with Perry's initiative of providing jobs through his facilties, the group strives to share opportunities within the community to showcase women content creators.

The organization also comes months after a Georgia bill that many argued took women’s rights away. The Living Infants Fairness and Equality Act would effectively ban abortions in the state except for cases of rape and incest with a police report, when the health of the mother is in jeopardy or the pregnancy is declared "medically futile."

Despite the potential for backlash from the entertainment industry, the city of Atlanta continues to remain a prominent spot for film and television, such as The Walking Dead and Black Lightning series and the motion picture Zombieland: Double Tap.

Autumn Bailey-Ford, co-founder and CEO of Autmn Bailey Entertainment, said with The Reel Divas, women are finally at the forefront of the industry.

"We've decided to take the stand and unite ourselves with our work," Bailey-Ford said. "We are excited about showcasing our city not only as a backdrop but (also as) a production hub for those working on a daily basis. We are here to stay."