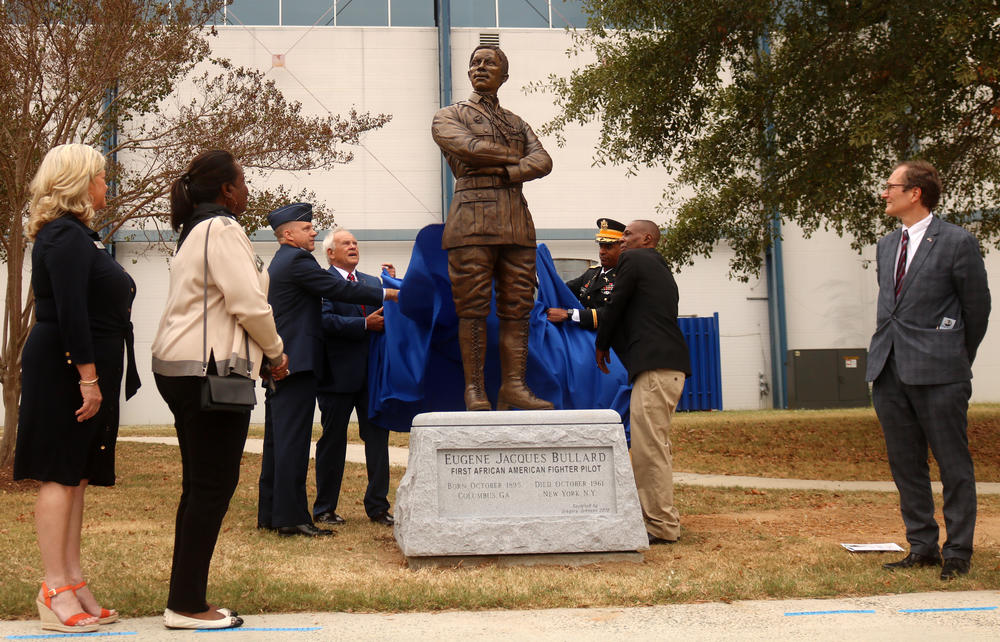 Caption
A full-size bronze statue of Eugene J. Bullard was unveiled on Wednesday, Oct. 9, at the Air Force Museum of Aviation on the Robins Air Force Base in Warner Robins, Georgia. Bullard, a Georgia native, fought in the French Armed Forces during World War I.

Jim Crow laws were in full swing when Eugene Bullard was born in Columbus, Georgia, in 1895. His dad was a former slave and his mom, a Creek Indian.

The racial tensions at the time were so overwhelming that he ran away from home as a child and stowed away on a boat to Europe at the age of 16.

He first arrived in Scotland before moving to France. During that time, he’d become a street performer, a dock worker, work on a fish wagon and even become a prize-fighting boxer.

Three years later, World War I broke out and Bullard joined the French Armed Forces at the age of 19, becoming the first African American pilot to ever fly in combat.

More than a century later, with 22 family members present, Bullard’s legacy was finally honored in the state he once called home.

“I am absolutely holding back tears,” said Harriett Bullard-White, one of Eugene’s cousins. “I know that he would love this.”

A bronze figure of Bullard now stands at the Air Force Museum of Aviation on the Robins Air Force Base. His arms are crossed, his head looking over his right shoulder, slightly tilted up, on top of a block of Georgia granite.

Rick Elder, with the Georgia World War I Centennial Commission, said Bullard is an embodiment of what can happen when you put your mind to something.

“It's a testament to the human emotion and the willingness and the drive that we all have — some of us use it and some of us don't,” Elder said.

Tuskegee Airmen from around the South joined Air Force soldiers and members of Bullard’s family for the dedication ceremony.

White, whose great-grandfather was brothers with Bullard’s father, said she hopes the statue can encourage reflection on what has been done by African American men, especially when they were not being recognized.

“I want little black kids to see what this guy did under the worst kind of racism and Jim Crow-ism, and to become what he became,” she said. “I can’t imagine what we could do given the same level playing field — he did this without level.”

His sacrifice was honored by the French, well before America accepted his contributions.

“Everybody can see that Gen. Bullard wanted to fight, and so he took the opportunity of fighting within the French Armed Forces,” Vincent Hommeril, the consul general of France in Atlanta said. “It can show to anybody nowadays that if you want to do something, you can achieve it.”

As the war continued on in 1917, Bullard tried to join the U.S.Air Force, but still couldn’t because he was black.

So he stayed in Europe, and became a partial owner of the club Le Grand Duc. It was a popular spot for musicians and artists like Charlie Chaplin, F. Scott Fitzgerald and Ernest Hemingway.

In fact, the character Jake in Hemingway’s “The Sun Also Rises” is heavily based on Bullard’s life.

After his time fighting, Bullard was awarded some 15 military honors by the French, including their highest one, Knight of the Legion of Honor. He was even recognized by French President Charles De Gaulle.

In 1954, Bullard was one of the three soldiers asked to relight the everlasting flame near the Tomb of the Unknown Soldier in Paris. De Gaulle also invited Bullard to commemorate the end of WWI by participating in the national wreath-laying ceremony.

“He was risking death every day,” Hommeril said. “So for us, it's very important to know that, when there is a great risk of great danger, people can engage themselves and come help.”

Bullard would eventually return to America and work as an elevator operator in New York, where he’d live out the rest of his life until he died in 1961.

It took more than three decades after his death before an American president would recognize his achievements. President Bill Clinton finally recognized him as a Second Lieutenant in the U.S. Air Force in 1994.

Now, his statue in Warner Robins joins the ranks of other statues, some that honor Tuskegee Airmen from World War II.

“Bullard encouraged so many follow-on black aviators,” Elder said. “The Tuskegee Airmen that are here today — he was their father, basically.”

Alvin Wright, a road Major for the Tuskegee Airmen Motorcycle Club, said he came to the unveiling because he thinks it's necessary to uphold Bullard’s legacy, especially since Bullard was born in a state fraught with a complicated racial history.

“It speaks to our background, our testament, our courage.” Wright said. “It’s a testament to our resiliency.”

Bullard-Wright said even though it took more than a century for him to be honored, she’s happy her cousin finally got his time.

"This is the state that is welcoming a native son," she said, holding back tears. "It's a hundred years. But it's never too late." 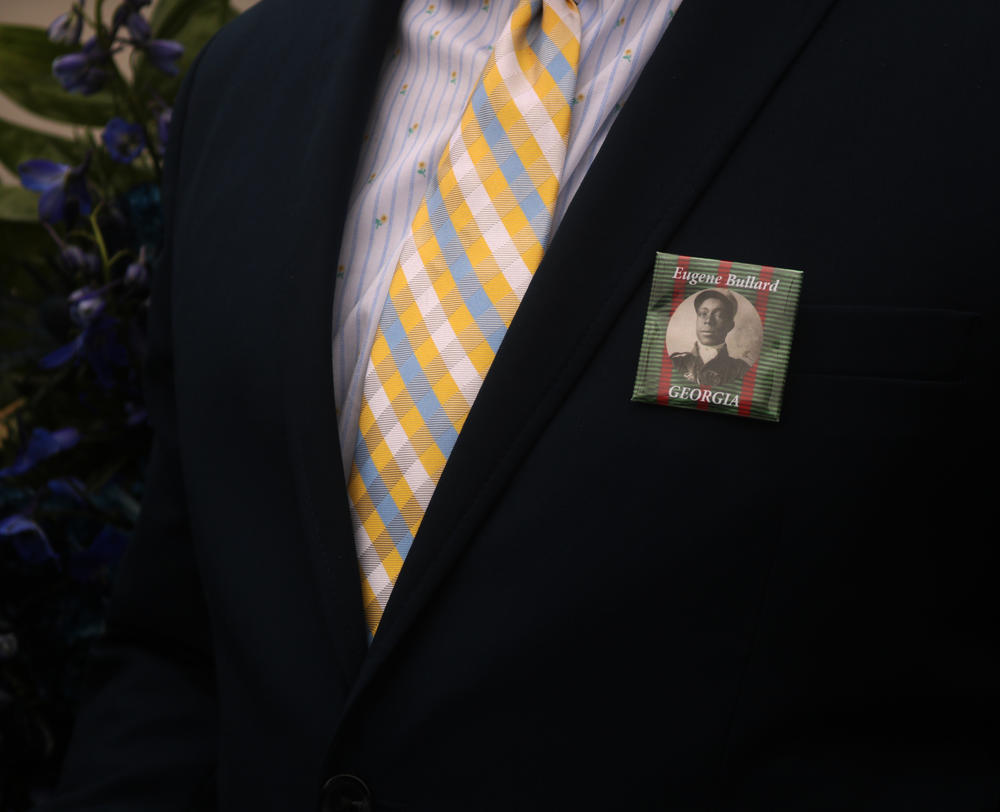 Caption
A family member of Eugene J. Bullard's wears a pin with his face on it during the dedication ceremony of the statue honoring Bullard's legacy as the first African American fighter pilot. 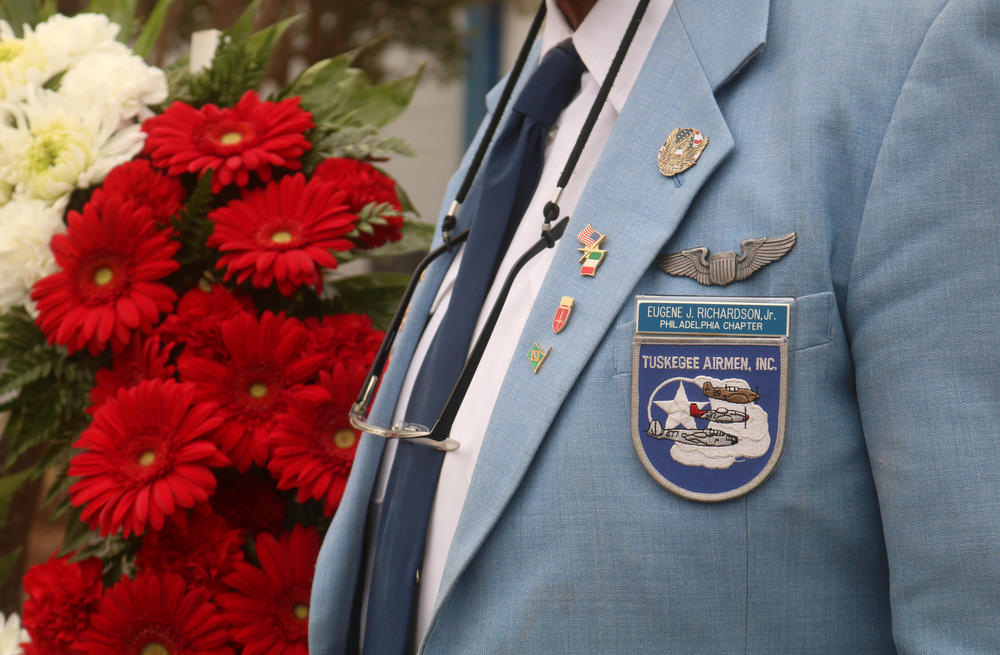 Caption
Eugene Richardson, a Tuskegee Airmen in the Philadelphia chapter, stands in front of flowers at the dedication ceremony for the statue of Eugene J. Bullard on Wednesday, Oct. 9, 2019. Bullard was the first African American fighter pilot and fought in the French Armed Forces in World War I.

Caption
A bronze statue of Eugene J. Bullard stands atop a square of Georgia granite at the Air Force Museum of Aviation on Robins Air Force Base in Warner Robins, Georgia on Oct. 9, 2019. Bullard was the first African American fighter pilot in World War I, and the statue was unveiled on what would have been his 124th birthday. 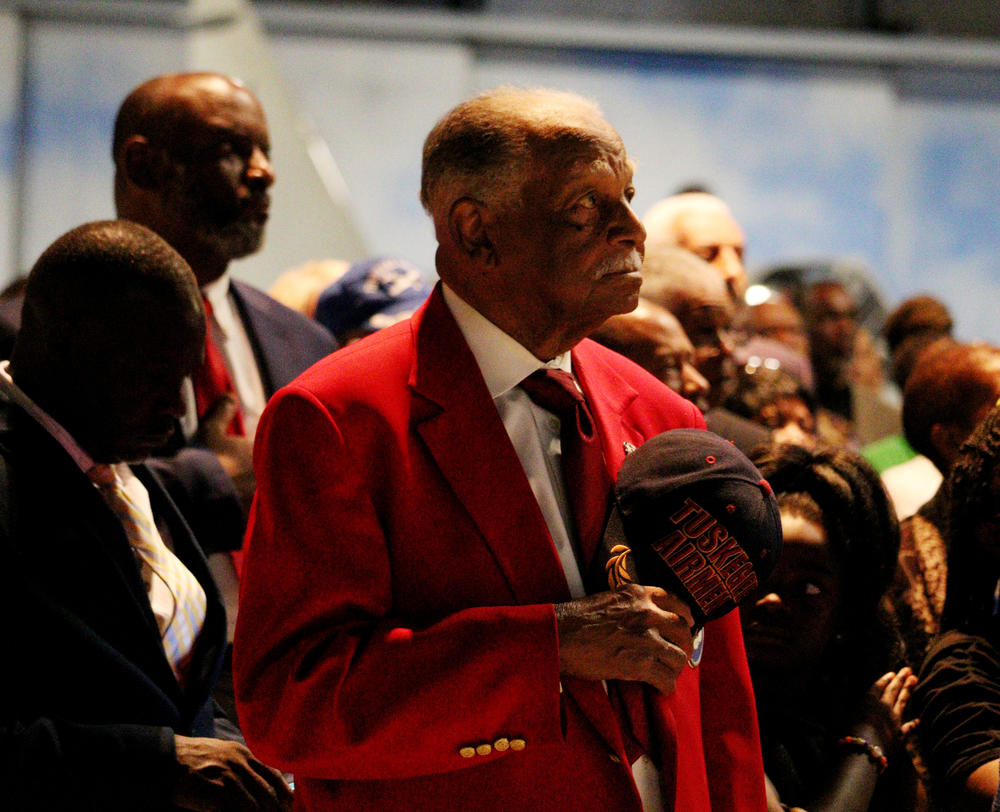 Caption
A Tuskegee Airman holds his hat over his heart at the memorial dedication ceremony for the statue of Eugene J. Bullard in Warner Robins, Georgia on Wednesday, 0ct. 9, 2019. Bullard fought on the French Armed Forces during World War I and is the first African American fighter pilot. 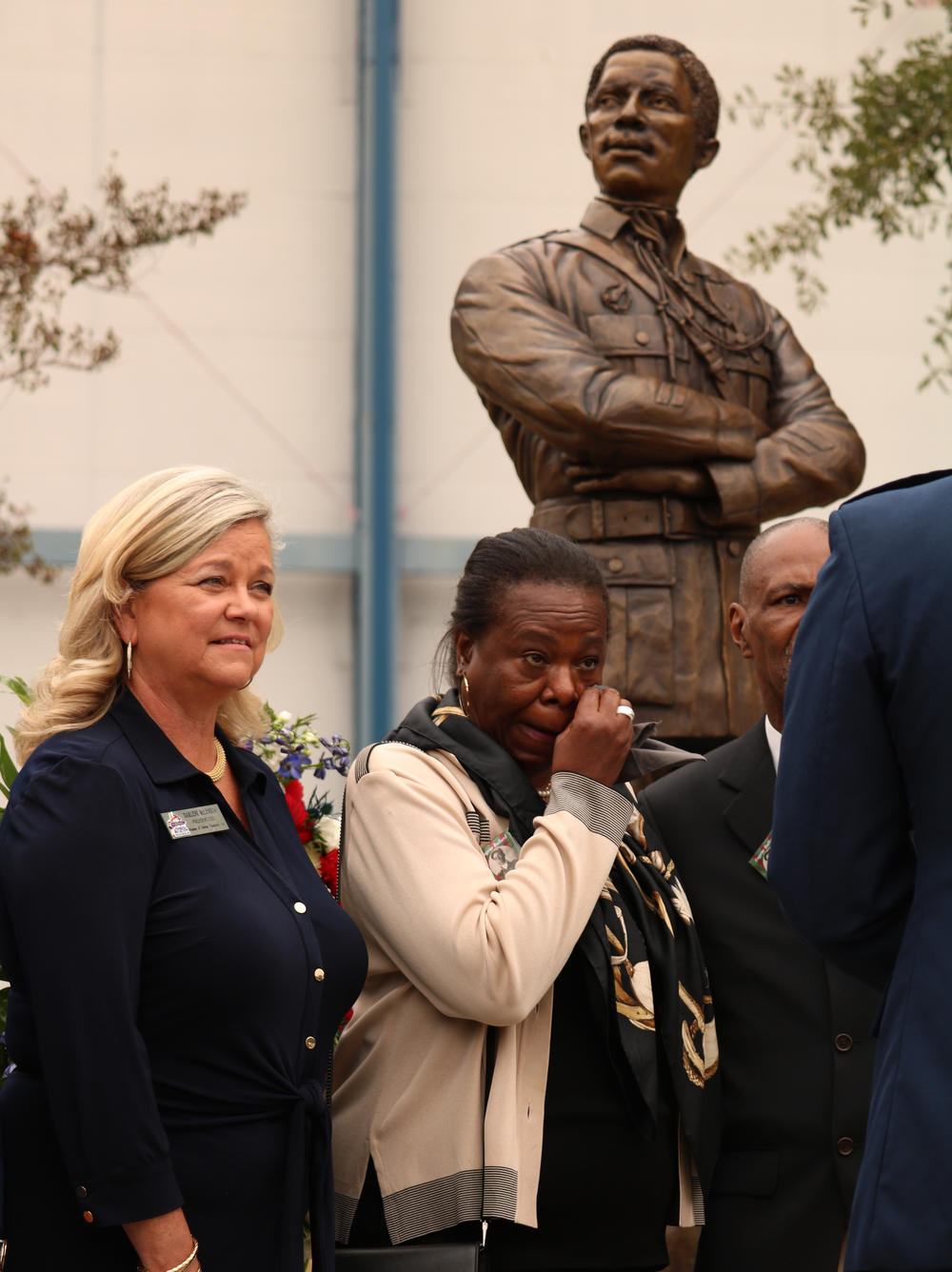 Caption
Harriett Bullard-White, one of Eugene Bullard's cousins, stands in front of the statue of Eugene Bullard after it was unveiled at the Air Force Museum of Aviation on the Robins Air Force Base in Warner Robins, Georgia on Wednesday, Oct. 9, 2019. Bullard fought in the French Armed Forces in World War I and was the first African American fighter pilot
Tags: Eugene Bullard  Atlanta  Georgia  Macon  Savannah